The last mainstream boxing game, Fight Night Champion, came out way back in 2011. Since then, boxing as a sport has gone pretty much un-represented in the world of gaming, but all that is about to change thanks to a small independent studio from Sheffield.

Steel City Interactive have already impressed fans with short, motion-captured teasers for their upcoming game, eSports Boxing Club. Those high-end visuals are powered by co-developers, Ten24, who have recently worked on blockbuster games like Death Stranding.

But the plans for eSports Boxing Club stretch well beyond impressive visuals. Big names like Ricky Hatton, Terri Harper, Frank Bruno, Micky Ward and Arturo Gatti are all on-board and featured in the game alongside high-profile belts and brands. Habib is confident it can set a new standard for boxing and combat games.

“If all we wanted was to achieve what Fight Night did in terms of gameplay – and in terms of how it looks – we wouldn’t have started in the first place. We’re looking to set the bar as far as boxing games go. We’re well on the way, in terms of the build we already have. We sent out a teaser with [former cruiserweight world champion] Johnny Nelson and people didn’t believe us that that’s actually in-game footage!”

Habib knows full well that their small indie-developer team is arranged against one of the giants of game developing, EA Sports. While EA no longer churn out Fight Night games, they do produce the popular UFC franchise.

“I think it’s fair to say that UFC set the standard for modern combat sims,” said Habib. “For us though, in terms of what we’re offering up, we want this to set the standard for combat games, regardless of whether it’s UFC or a boxing game. With the partnerships we’ve got in place with Ten24 and the motion capture studio, we can deliver that.

“While we’re a small team and we don’t have the millions of pounds that go into some games, we feel that sometimes it works to our advantage. Because – as gamers – if we want to put something in the game, we can do that almost instantly, without going through the red tape and hierarchy of a huge studio. Everyone’s opinion is going into the game here because we’re all boxing fans. That’s why I think we’ve got something special.”

In trying to make the game truly special, Habib claims that physics and impacts have been at the heart of the game-building process. Boxing is a notoriously challenging sport to capture accurately in video games – as a glance at former Fight Night titles will show.

“The Physics was pretty much our first six months of development,” said Habib. “We didn’t do anything visually, or on the art style. We spent a solid six months on the physics because the game is all about the gameplay and in a boxing game that is all about physics.

“We decided to ditch things like repeatable jabs and punches where they all look the same. What we’ve got instead, through our partnership with a world-leading motion capture studio, is something that’s going to be on another level to Fight Night.

“The fighters, not only do they look pretty insane in terms of the visuals, but the movement is an actual representation of a human body. We’ve got actual weight represented in each limb and that’s never really happened in a boxing game.”

Related: Best PC Games 2020 – 12 titles you need to experience on your gaming rig 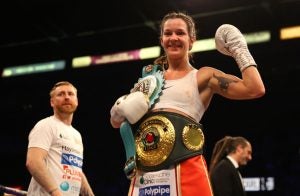 Stars like WBC and IBO super featherweight champ, Terri Harper, are set to be included in the game. Image via Getty

You can say goodbye to button mashing too, according to Habib. He claims that eSports Boxing Club is going to offer a real challenge to gamers, comparing the difficulty to the emergent ‘Soulslike’ sub-genre. The similarities end there, we presume.

“It’s not going to be that kind of game where you just button-mash and throw millions of punches,” he said. “It’s all based on physics, not on repetitive animations and things like that.”

“The number one message when we first started this was that we want impacts to be the main point of the game. You can’t have a boxing game if you don’t feel the impacts. That was the number one priority when we were developing this initially.”

The game is set to land on PC first, around the end of this year, with console releases to follow across current and next-gen platforms.

“The PC market has been pretty much ignored from a boxing perspective, for decades really,” added Habib. “None of the Fight Night games were ever released on PC. We know, from PC gamers, that there has been demand for some time and they’ve just been overlooked.”

Fans can expect a challenging career mode, which can be undertaken as a fighter that you build yourself, or as one of the game’s pre-existing fighters. Within the career players make choices and interact with backroom staff, from promoters, to trainers, to cut-men and nutritionists. There are also game modes for competitive online play.

The long-term plan for eSports Boxing Club is an ambitious one, with WBC-endorsed eSports leagues and rankings tables to be set up in 2021. This seems to be where the game envisages its future – and clearly the game’s title suggests an emphasis on this eSports route.

However, eager fans shouldn’t expect an annual franchise, despite the fact that competing sports titles have made format the industry norm.

“We’re not looking to release sequel after sequel or make this a yearly franchise,” explained Habib. “We’re looking to go through seasons. So, once someone purchases this game, we will be continually adding to the roster of fighters. There’ll be packs that are released throughout the year, for two, three or four years. Eventually the game will have 150 plus fighters.”

So, after almost a decade, the wait for a new boxing game is finally drawing to a close. We’re looking forward to getting hands on with this game later in the year. Watch this space for more updates.