Corsair crams 9th gen Core i9s and 2080s into tiny metal boxes and, amazingly, the things don’t run hotter than the centre of the sun.

Corsair unveiled its new line of One gaming tower PCs at CES 2019, which promise to keep high-performing components like Intel Core i9-9900Ks and Nvidia GeForce RTX 2080s nice and cool thanks to an interesting airflow design.

Three fans coupled with liquid coolers mounted directly on the CPU and GPU mean that Corsair Ones should run optimally without those main components getting too hot under the collar and, trust us, the i9-9900K can get seriously warm. 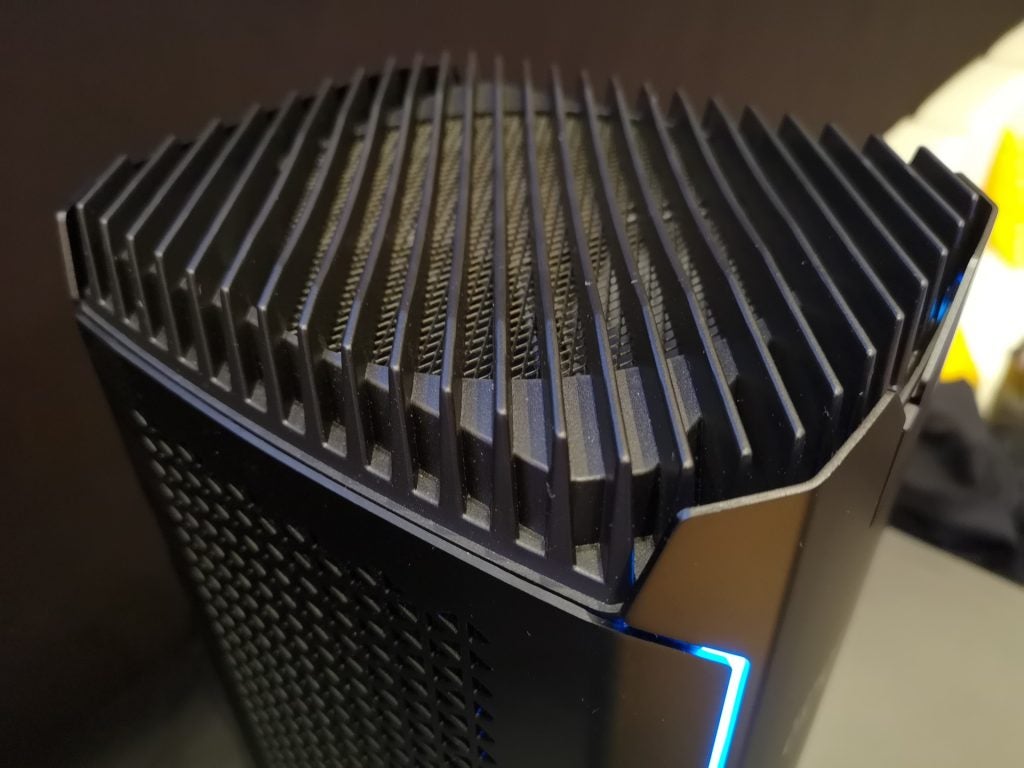 The fire rises: The Corsair One’s design sees all of that unwanted hot air pushed out of the top.

Combined with the HP Omen X Emperium 65, you’re looking at spending the better part of ten grand if you’re thinking of giving your gaming den/living room a serious upgrade. 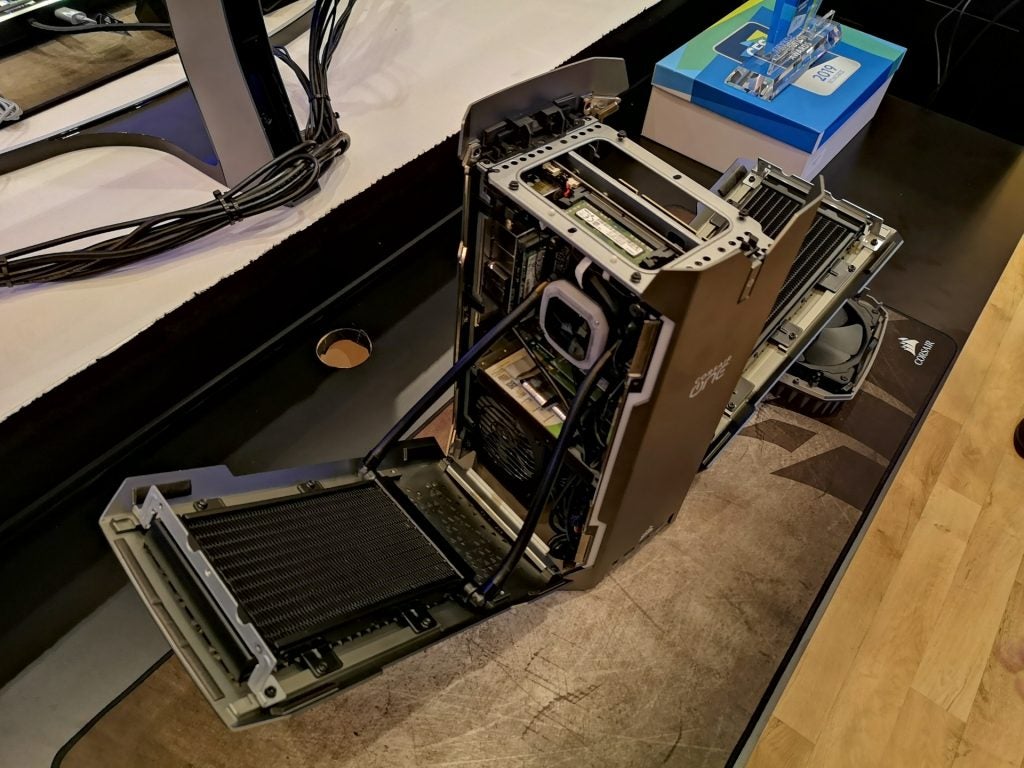 Heatsinks on either side and fans drawing cold air in keep everything nice and chilled.

Corsair One PCs are towers divided down the middle by the motherboard – the CPU is sat on one side, and the GPU on the other. There are heatsinks sat on either side of the cylinder, which you can see in the picture above, and vents drilled into the sides of the metal case.

The two fans at the sides are mounted on the power supply and the vRAM to directly cool those units, and also pull colder air from outside into the rest of the case. The single big fan drags all of that air upwards, jettisoning it out of a vent on the top. I put my hand over the top of a Corsair One i140 which was playing Battlefield V (the same game every PC has been running at CES this year) on ultra settings, and the air shooting out of the top was pretty warm. It didn’t appear to be too loud either, but then again, that’s a tough call to make when you’re at a busy trade show stand.

Corsair say that the One desktops are on par with fully-fledged workstations that are three times as big in size; measuring 380 x 200 x 172.5mm, that’s a bold claim. 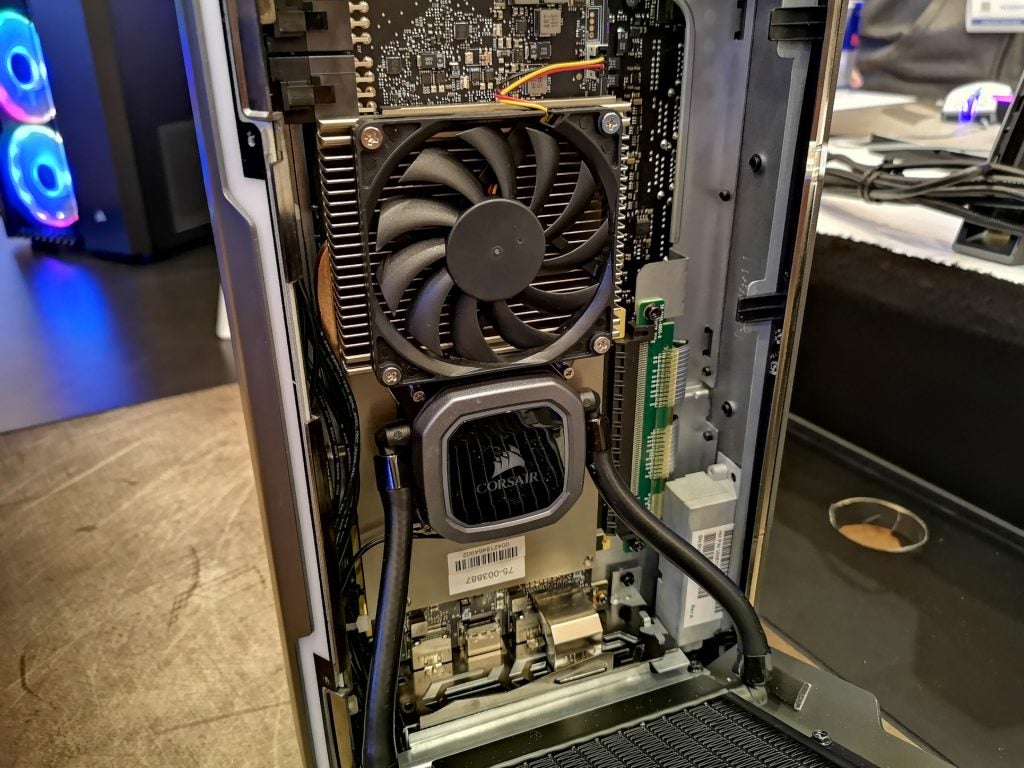 A combination of liquid coolers and fans mean that everything inside a 2019 Corsair One, like the Nvidia GPU here, should run at full clip without melting.

At the highest end of the range, you get an even more powerful Core i9-9920X 12-core processor and an Nvidia RTX 2080 Ti blazing away. If Corsair can keep those things ticking over without generating huge amounts of heat, then they’ll have pulled off an impressive trick here.

As is common with gaming PCs, storage options are a mix of SSDs and HDD spinning drives, giving you a best-of-both-worlds type solution – use the bigger capacity and slower hard drive for storing files, and the faster-loading but smaller SSD for storing games and apps.

It doesn’t look like the Type-C USB ports support Thunderbolt 3, but you get a huge range of connections on each model – three DisplayPorts and one HDMI 2.0 port, so people doing creative work will be able to connect to multiple 4K monitors, if they wish. Above the HDMI port, you’ll see the ‘VR Ready’ insignia, so this should comfortably run any VR experiences you’d dive into via something like the Vive Pro, or the forthcoming Vive Pro Eye. 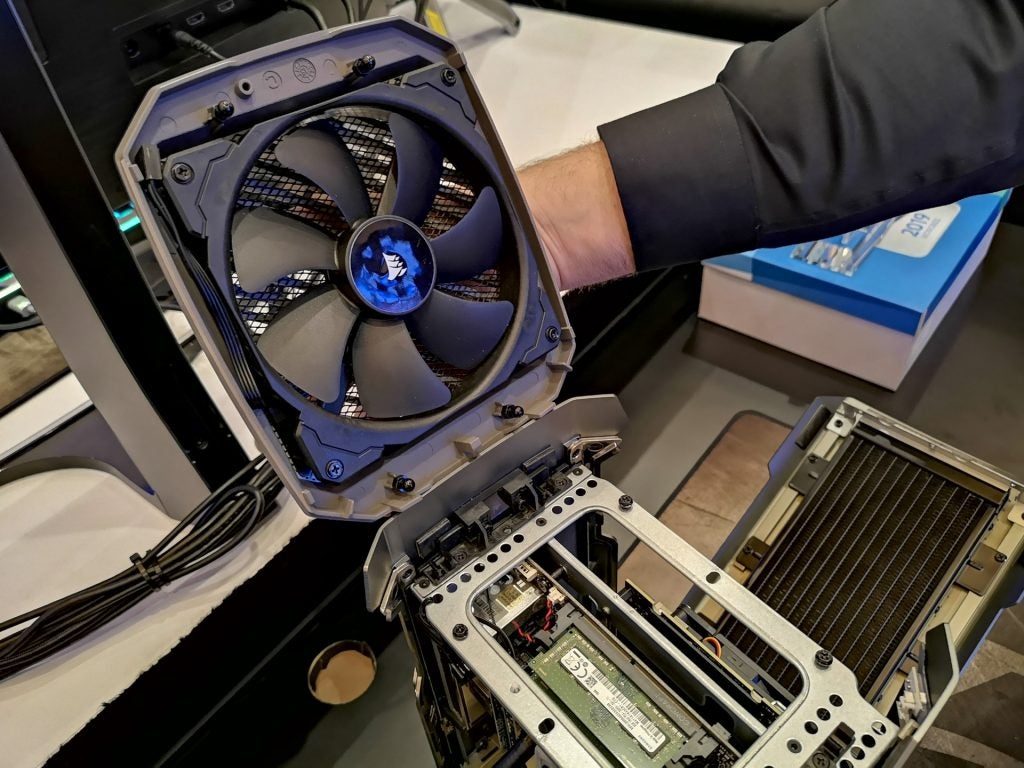 The big fan at the top is responsible for removing all air that’s been warmed by busy components up and out of the new Corsair One PCs.

The only flaw we can see with this design is that if you’ve got cats, they’re going to want to sit on top of your Corsair One. Maybe have some catnip close by to keep them away.

Given that I couldn’t actually play much more than Battlefield V on the i140 or see these monstrous-sounding gaming PCs running in action, I can’t really offer much of a first impression, other than, knowing how finicky and troublesome the Core i9-9900K can be when it gets too hot, I appreciate the thinking behind the design here and think that Corsair might have hit on an ideal solution. With the key components directly chilled by dedicated liquid coolers and three fans working in tandem to ensure that any warm air is expelled efficiently, I have no reason to doubt that its general performance will be anything but top rate.