The annual Computex show took place in Taipei earlier this week, with a number of high-profile launches joined by a raft of smaller technologies which could have a big impact on upcoming products.

The second largest computer expo in the world after Germany’s CeBIT, Computex is also the largest show of its type to take place in Asia. As such,

It’s where major Taiwanese companies such as Asus and Acer typically launch many of their major product lines for the year, and this year was no different. Japanese manufacturers such as Panasonic and Toshiba also make for a strong showing.

The presence of such heavy hitters naturally draws American chipset companies like Intel, AMD, and Nvidia, among others.

So if you’re remotely interested in the future of computer technology, Computex should be on your radar.

Still, we know that it can be difficult to follow all of the announcements and releases from this busy and far-removed two-day event. That’s why we thought we’d round-up some of the key news to emerge from Computex 2014.

Intel gets to the Core M of the issue

Perhaps the biggest and most far-reaching reveal of Computex 2014 came from international mega chip maker Intel, which took the wraps off its exciting new Core M processor.

This new standard is built using a tiny 14-nm production process, meaning it requires far less energy to power. The benefits for tablet and laptop devices are obvious, but no less impressive.

We’re talking better battery life, slimmer form factors, and quieter running, as there will no longer be any need for cooling fans.

To illustrate what kind of devices will be possible with these new Intel Core M processors, the company unveiled a 12.5-inch tablet-PC hybrid prototype with a ridiculously slim form factor. This reference device, called the Llama Mountain (we’re not sure either), is just 7.2mm thin, and weighs a relatively slight 670 grams (not including the clip-in keyboard).

It’s a tablet, essentially, but with sufficient performance to run the full Windows 8.1 OS. Even the Microsoft Surface Pro 3 couldn’t quite manage that feat.

We’ll probably start seeing the first Intel Core M-powered laptops and tablets at the turn of the year. 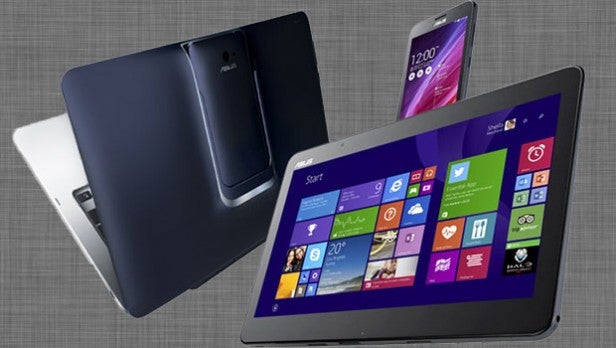 As we’ve already hinted at, no one takes Computex quite as seriously as Asus. This year’s event saw another stack of Asus devices announced, the most interesting of which was the crazy 5-in-1 Asus Transformer Book V.

Yes, you read that right. The Transformer Book V is a 12.5-inch laptop that runs both Windows 8.1 and Android (that’s two), which can also be converted into a tablet form factor for either OS (that’s four), and which also slots a 5-inch Android smartphone into the back (that’s five, and relax).

Asus wasn’t finished with the funky form factors either, as it unveiled the Asus Transformer Book Flip. This Windows 8.1 laptop comes in 15.6-inch and 13.3-inch models, and has the uncanny ability to flip its screen right the way around, turning it into a somewhat flabby tablet. A flablet, if you will.

It’s a similar concept to last year’s Lenovo IdeaPad Yoga 13, which we rather liked.

Asus also unveiled a new high-end 15.6-inch laptop called the Zenbook NX500. Yes, it comes with a 15.6-inch 4K display, an Intel Core i7 CPU, and a GeForce GTX 850M GPU – all in a premium 19mm-thick body. But that body only features the one form factor. They just weren’t trying with this one, were they?

The manufacturer also showed off the ‘world’s largest’ 32-inch curved monitor prototype. We’re not talking curved to the extent of some recent TV sets, like the Samsung UE55H8000, but rather a gentle concave effect suitable for close-up viewing.

With a 2560 x 1440 4K resolution and a 16:9 aspect ratio, this could be the ultimate monitor for media-heads, assuming it makes it to retail that is.

Meanwhile, connectivity fiends may be interested to learn of Asus’s new RT-AC3200 wireless router. Yes, we used the words “interested” and “wireless router” in the same sentence.

This bad boy looks pretty impressive though, sporting six antennae for speeds of up to 3,200 Mbps. That’s fast. It’ll even intelligently modify your wireless coverage when needed, too. 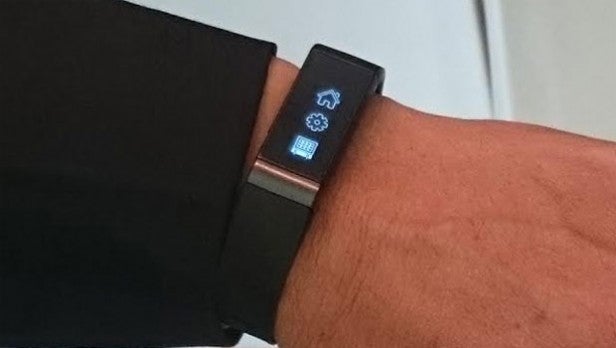 The other big native company at Computex 2014 was, of course, Acer. Wisely steering clear of a direct face-off with Asus, it spent much of the show focusing on more singular and small form factors.

The Acer Liquid Leap is the company’s new fitness tracker with a 1-inch elongated display. Think the Samsung Gear Fit, with a similar ability to take calls and receive SMS messages besides monitoring your running program.

Moving up the smart device food chain, Acer also used the show to unveil five new smartphones. Chief among these is the premium-specced Acer Liquid X1, with a 5.7-inch display, a 1.7GHz octa-core CPU, and a 13-megapixel rear camera.

Acer isn’t exactly an established name in smartphones, of course, but it does appear to be thinking of common problems in a relatively fresh way. For example, Acer Zoom Fit shrinks the UI to a corner of the display for single-handed usage, while Acer RAPID is a physical button on the back of the device that’s dedicated to quick-launching your most-used apps.

Elsewhere, Acer pushed the Liquid Jade forward as the world’s “most compact 5-inch smartphone.” With a slim body (6.8mm at its narrowest point) and a near edge-to-edge display, we can see why they might suggest that. Otherwise, it’s a pretty unremarkable mid-range phone headed for parts of Europe and Asia later this year.

All in the wrist 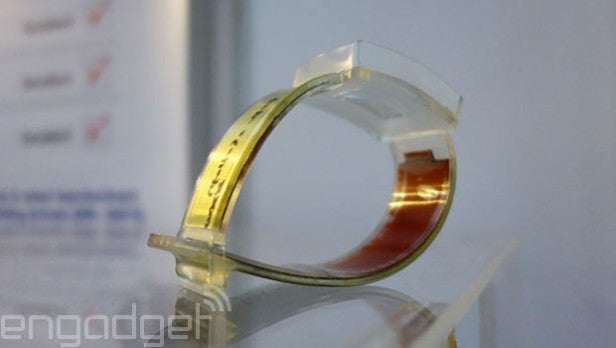 As we’ve just discussed, thanks to Acer, at least some of Computex 2014’s focus has been on the smartwatch format.

Of course, one of the biggest drawbacks with early smartwatch efforts has been battery life. We expect out wrist watches to last a great deal longer than our phones, and the likes of the Sony Smartwatch 2 and the Samsung Gear 2 just don’t.

Computex 2014 provided one possible solution to this. ProLogium was on hand to show off an intriguing product that sees flexible lithium-ceramic power cells built into a smartwatch strap.

Current iterations are good for an extra 300mAh of power, but ProLogium reckons it could extend that to 500mAh. That’s not a lot in smartphone terms, but it would be good enough to effectively double the battery life of a Pebble smartwatch.

They’re completely safe, too, so any tampering or damage won’t result in melted wrists. All very promising.

US computer giant also used Computex 2014 to launch a couple of new devices.

Following Asus’s lead with the Asus Transformer Book Flip, the Dell Inspiron 13 7000 is another laptop-tablet hybrid that can twist itself around in all sorts of funny positions.

The Dell Inspiron 20, meanwhile, drops the keyboard dock. But that’s not to say it’s a traditional tablet by any means. In fact, it’s a huge 19.5-inch all-in-one PC that’s designed to be carried between rooms rather than between coffee shops.

It runs Windows 8.1, and can be folded flat or propped up like a monitor.

So that’s it, the highlights of Computex 2014. The next major show on the tech calendar is E3 2014 and we will be on the show floor in LA to bring you all the latest so stay tuned to TrustedReviews for the gaming goings on.