The Samsung UE55H8000 is the second curved TV screen from Samsung’s 2014 LCD range. However, it’s only 55-inch in size versus the 65-inch screen found on the UE65HU8500, and as the missing ‘U’ from its name signifies, it’s an HD model rather than a full UHD one. As a consequence it’s around half the price of its 4K cousin, but that still puts it in and around £2,000 and that means it comes with every conceivable feature Samsung can offer. Is it enough? 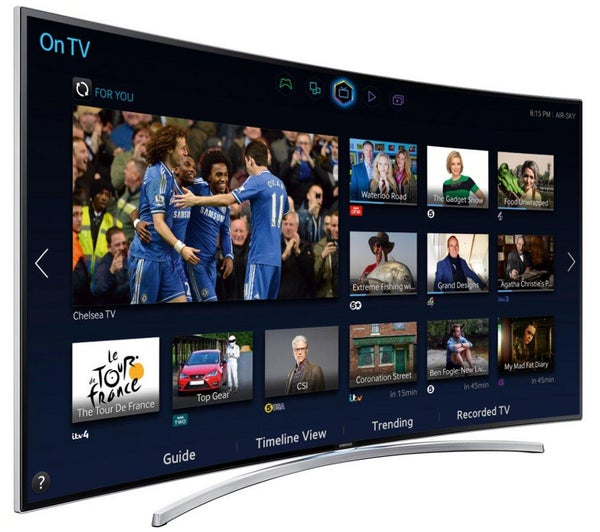 As with the UE65HU8500, the concave curve of the UE55H8000 makes for a striking looking TV. It just looks cool in that way things you don’t think should quite be scientifically possible always do.

The attraction fades a bit if you want to wall mount the set, as the way the curved edges bend away from the wall looks a bit awkward. But it certainly cuts a distinctive and enviable profile when mounted on its cross-style stand – even though this stand design doesn’t emphasise the curve as cutely as the better built stand you get with the UE65HU8500.

Build quality is generally pretty good though, and the frame around the TV is slim – as it needs to be, we feel, in order to stop the curve becoming too in your face.

We have a dedicated article in the works examining the full pros and cons of using a curved screen on a TV beyond the obvious aesthetic appeal, but we’ll still look briefly at the curve’s impact in the performance section of this review.

Connectivity on the UE55H8000 is strong – as you would expect of Samsung’s flagship full HD TV for 2014. Highlights comprise four HDMIs, three USBs, and both integrated Wi-Fi and LAN ports. The network options inevitably support both DLNA streaming from networked devices and access to Samsung’s online Smart TV service.

The connections are built into the TV rather than carried on an external connections box like they are with the HU8500 series. But brilliantly you can still benefit from Samsung’s unique upgrade feature by slotting one of next year’s Evolution Kit boxes – complete with the latest Samsung chipsets – into the provided space on the TV’s rear. 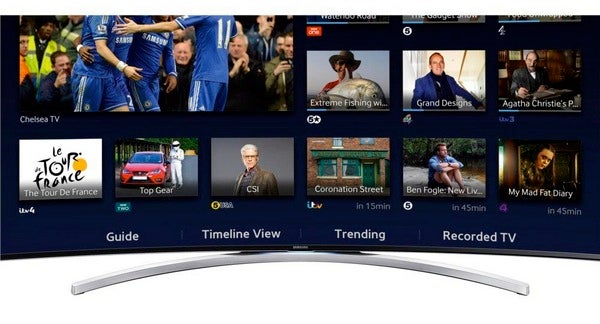 Samsung’s Smart TV functionality for 2014 is also soon going to be the subject of a dedicated feature, but we’ll cover it briefly here by saying that while it’s not quite such a whole-sale reinvention as we’ve become accustomed to seeing from Samsung year on year, it certainly adds enough – including finger gesture control, a point and click remote, a football mode, an excellent picture in picture feature, improved social networking features, and a new Game Hub screen – to improve on what was already a strong platform last year.

Samsung also continues for now to be the only manufacturer offering catchup TV apps for all four of the main UK terrestrial channels. However, this exclusive situation is, crucially, set to change with the imminent launch in the next couple of weeks of Panasonic’s new Freetime-equipped TVs.

Samsung has improved the iOS/Android app it offers for controlling its TVs this year so that you now only need one app to access all of its content-sharing and second-screen features rather than two separate apps like you did last year. It’s worth noting here, too, that the UE55H8000 is a twin-tuner model with Freeview HD and Freesat HD onboard, so it’s possible to watch one tuner on a smart device while another plays on the TV.

Perhaps indicative of a wish on Samsung’s part to push you towards its UHD TVs, the UE55H8000 doesn’t have as many picture-boosting features to its name as the UHD HU8500 models do. For starters it doesn’t get the local dimming functionality of the UHD models. Instead, aside from a Cinema Black feature that can separately control the light in the areas of the picture where black bars appear above and below 2.35/2.4:1-ratio pictures, you get the Micro Dimming Ultimate system, which divides the image into hundreds of segments for more accurate analysis by the TV’s ultra-powerful Quad Core Plus processing engine as it continually calculates the optimal picture settings.

While the lack of local dimming will undoubtedly be felt, it’s worth remembering that the top tier of micro dimming carried by the UE55H8000 has still consistently delivered some terrific results on previous Samsung TV generations.

The UE55H8000 also ‘only’ delivers a 1000Hz-like motion processing system compared with 1200 on the HU8500s (though both of these figures are very high by the standards of the industry as a whole). More significantly, the UE55H8000 also doesn’t benefit from the PurColor system that had such a huge impact on the vibrancy and accuracy of the UE65HU8500’s pictures. 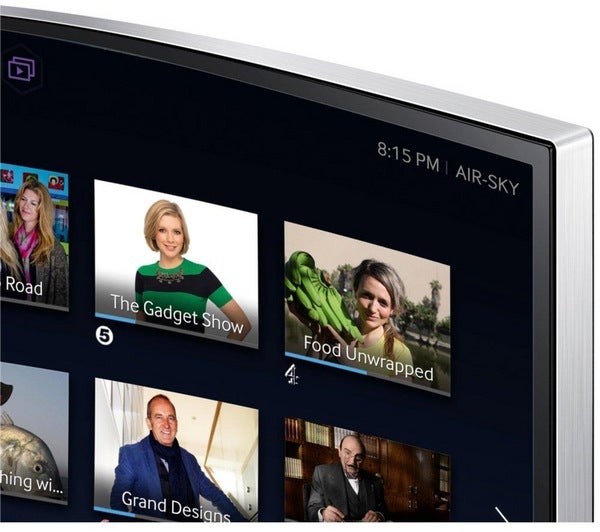 The UE55H8000 does a decent job of guiding you through the initial installation process, covering both tuning and the setting up of the Smart features. At this stage we were reminded that unlike the HU8500 models the UE55H8000 doesn’t have a built in camera, so you can’t use its gesture functionality or Skype features without adding an optional extra external camera.

The UE55H8000 offers excellent flexibility when it comes to calibrating pictures. The presets are a bit limited – there are only five if you include the Game one tucked away inside the TV’s System menu – and they all tend to push contrast and backlight settings too high. But the preset problems can fairly easily be sorted out via the set’s extensive picture menus. In particular we’d recommend reducing the backlight to as low as its ‘8’ level when watching in a dark room to both maximise black level potential and reduce (to the point that they almost disappear) the backlight clouding inconsistencies that become visible during dark scenes when the backlight is set higher.

We’d also suggest turning off noise reduction when watching HD, and reducing the sharpness a little – or quite a lot, actually, if you’re watching 3D.

Take care with Samsung’s motion processing system too. It’s more effective than ever before thanks to the introduction of the Quad Core Plus processing engine, but we’d still not recommend setting it to anything higher than its lowest level of processing power.

Finally, we’d suggest caution around the UE55H8000’s dynamic contrast system. For while it can marginally improve the image’s contrast, it can also make dark scenes look unstable thanks to the fluctuating brightness levels it causes. So given that the UE55H8000’s native contrast ratio is very good anyway, it’s probably best left turned off. At least when you’re watching a contrast-rich source like a typical film.