Bungie has been forced to take another overpowered weapon out of Destiny 2, at least on a temporary basis until things are patched up.

The developer has taken the Telesto Fusion Rifle out of the loot shooter after some players managed to turn the weapon into a sort of cheat.

Players were using the rifle to super charge their super abilities. As the video below shows, a player with the Ashes to Assets armour perk equipped could shoot the Telesto at the floor, before throwing a grenade at the energy field left behind by the rifle. Destroying the energy field, in these specific circumstances, counted as a kill and re-charged the ability.

We expect Bungie to fix this issue and re-instate the weapon, rather than permanently removing it from the game.

The burst-firing, tier six weapon was classed as ‘exotic’ in the rarity stakes. It fires projectiles that cling to enemies and any other surfaces they hit. The projectiles look like a sort of fizzing energy field.

Its stats are listed in the image below, as is its strange synopsis: “Vestiges of the Queen’s Harbinger yet linger among Saturn’s moons.” That odd little weapon bio is due to the fact that Telesto is, in fact, one of Saturn’s moons. 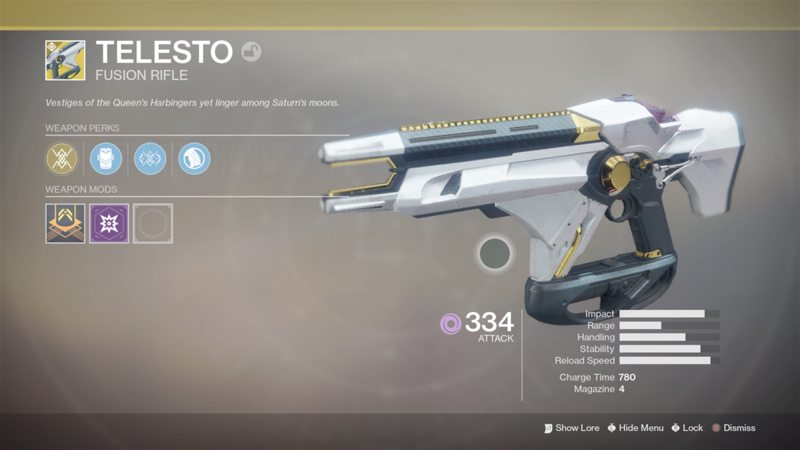 According to Destinypedia, the weapon may have another secret. They said: “The weapon’s perk, Harbinger’s Spark, bears the Cassoid insignia, possibly meaning that the weapon was manufactured by the foundry. The foundry currently does not make any more legendary or exotic weapons other than Telesto in Destiny 2.”

Players who had taken advantage of the in-game loophole might be annoyed to see Bungie correct it but, overall, it’s far better for players to see the game re-balanced. For those who were on the receiving end of this un-fair competitive advantage, the weapon correction will be a relief.

Destiny 2’s latest expansion, Shadowkeep, launched earlier this month and has been met with a positive reception from both fans and critics. Acting as the first major expansion since Bungie’s departure from Activision, it spells a bright future for the loot shooter.

“Shadowkeep is everything every player wanted from Destiny 2 and in true Bungie fashion it was delivered with a bang – which presumably emanated from the servers as they exploded on launch night,” reads our 4.5/5 review.