In June, Trusted Reviews put on its wellies and headed down to the Isle of Wight Festival for a behind-the-scenes look at Sky’s production in partnership with Dolby.

The event has become a proving ground for the British broadcaster following its delivery of the music festival in Atmos in 2018, while Sky began its 4K UHD service there the year before.

Despite the growing Atmos experience with football, the Isle of Wight Festival has proven to be a difficult beast to tame − a changeable environment with plenty of variables.

So with that in mind, how exactly is a music festival produced in Atmos? Sky’s Kevin McCue and Dolby’s Jason Power guide us through the process.

Having taken a fairly literal approach to the 2018 Isle of Wight Festival, lessons were learnt on how and where to make improvements this year.

Kevin McCue, head of Technical Innovation and Facilities at Sky, informed us that there are two approaches for producing a music festival in Atmos. “There’s live – which is what [Sky] is doing – or post-produced. They’re completely different in their approach and what you can get from them.” 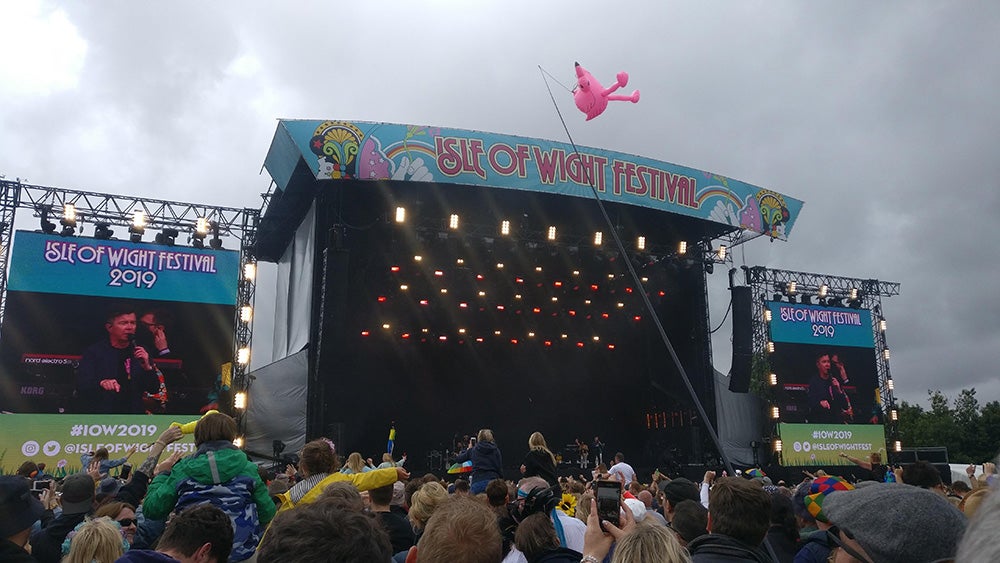 Rick Astley’s “Never Gonna Give You Up” (or say goodbye)

A post-produced effort yields more opportunities to tweak content. That’s less the case with live − or almost live − production. “If the crowd is dead, the crowd is dead, you can’t cheat that if it’s on camera. If it looks small, it is small”, McCue affirmed.

In that sense it’s similar to a sports event. However, putting this operation together isn’t as simple as turning up to a place such as Wembley and plugging in to the existing infrastructure.

“In general, it’s just people running around with their hair on fire”

This year’s Isle of Wight Festival took place over three days with over 50 acts performing. Sky covered the Main Stage outdoors alongside the Big Top, which is indoors.

As McCue says, “something like this, it looks the same every year. It isn’t that you’re encountering things that are different, it’s just a festival event is completely different. Bands are different. You might go from 180 lines all the way down to just a DJ on two lines, so that’s the swing of complexity between acts.”

“In general, it’s just people running around with their hair on fire! We’re trying to make television and that’s the nature of festivals.” 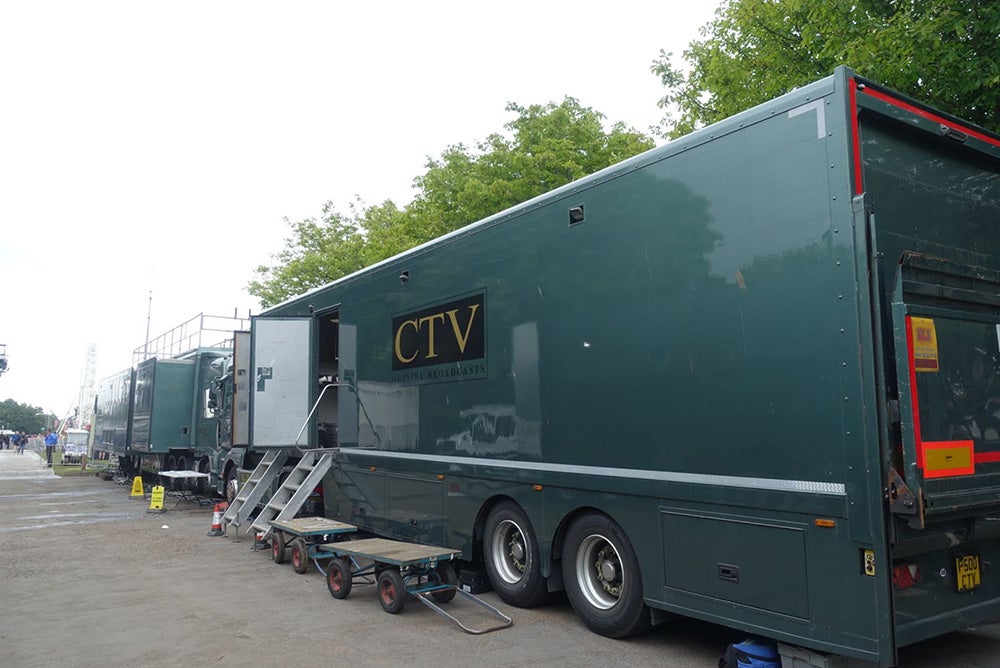 The huge outside broadcast trucks are full of expensive-looking equipment

But Sky, in concert with production house CC Labs, tries to bring that chaos under control with technicians/creatives monitoring every aspect of the production from the OB (outside broadcast) trucks parked behind the Main Stage.

These trucks − used across Europe and further beyond − aren’t cheap, functioning as production suites on wheels with connections spilling out all over the place.

They roll out on a Monday night, with preparation for the festival beginning in earnest on Wednesday. Microphones are rigged followed by a test on Thursday. In the Big Top, which looks like a circus tent and is filled with hay, a couple of bands perform live sets so the production can test its systems through to the set-top boxes at Sky MCR. 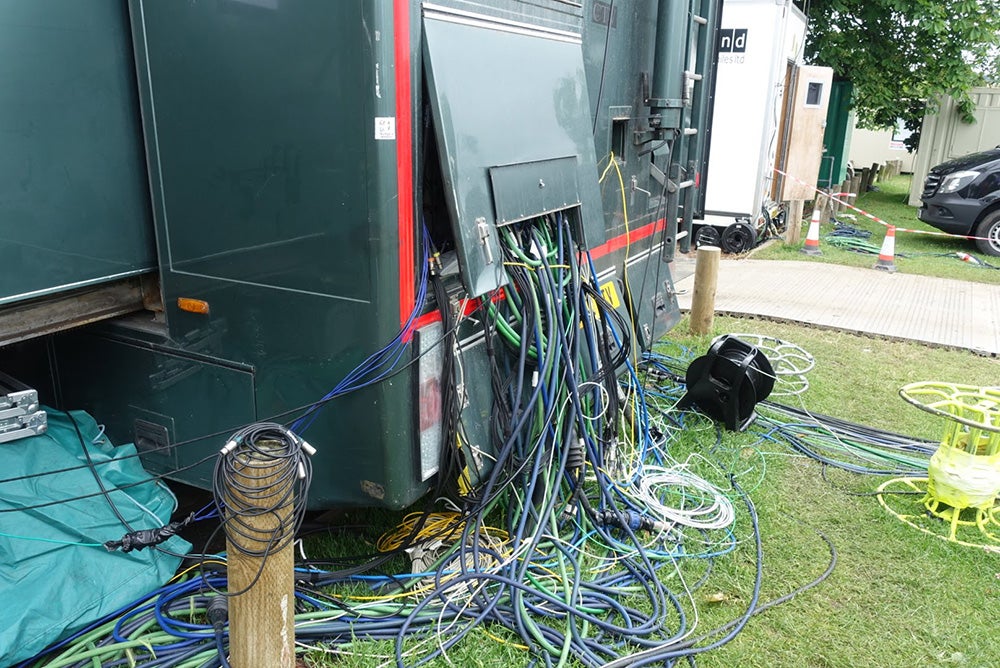 “It’s one mix truck per stage. So we have the Big Top and the Main Stage and they’re mixing the band as live and then their mixes, which is the 5.1 and heights, are pumped back to the main outside broadcast trucks.”

“[And] we’re getting completely different results in both [stages]. Both of them are working in entirely different ways.”

Last year’s festival gave Sky a rough idea of what to expect, laying down the foundations for this year’s broadcast.

As McCue explained, “what we learnt was the sound is everywhere, but it has to be different. So rather than just have this wash of crowd above, we’ve taken the approach of trying to point out little clusters of people in the crowd. So if someone claps hands, for instance, your brain goes “well that’s different” as opposed to it just sounding like there’s a load of band over your head.” 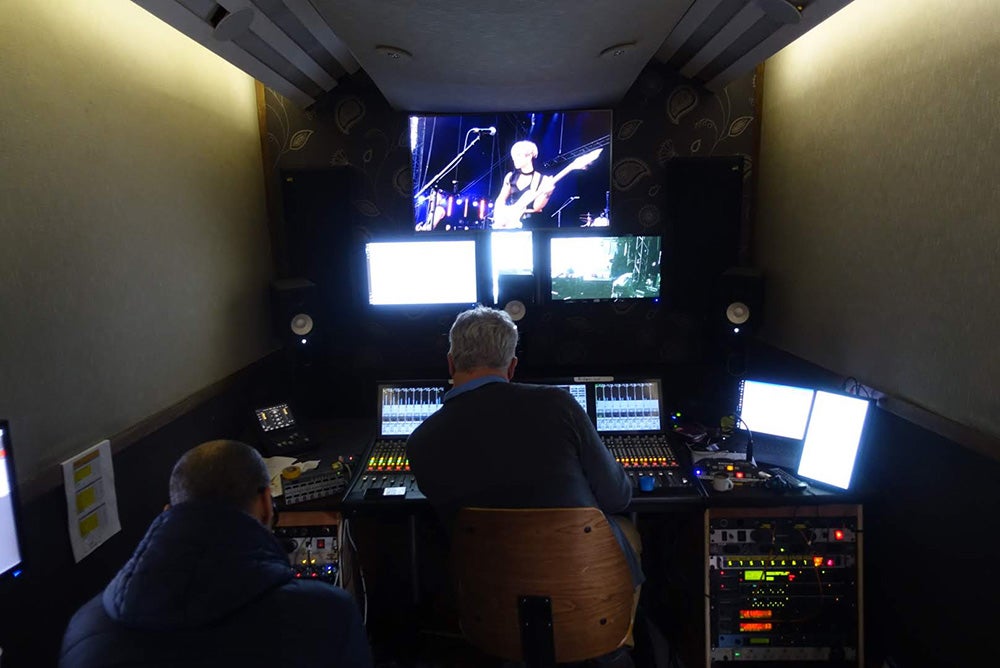 Technicians hard at work inside one of the mixing trucks

That means a different approach to capturing sound. Where in the past you could have covered the audience with three microphones placed on each side and one in the middle, Atmos requires around 16 in total. The production has to take in all the coverage from the audience as well as splice that with the music acts performing on stage for one seamless whole.

“Most sound consoles aren’t Atmos aware per se, so they don’t really understand objects, renders and heights; a lot of what consoles have done is some kind of bodge to make Atmos work,” said McCue. 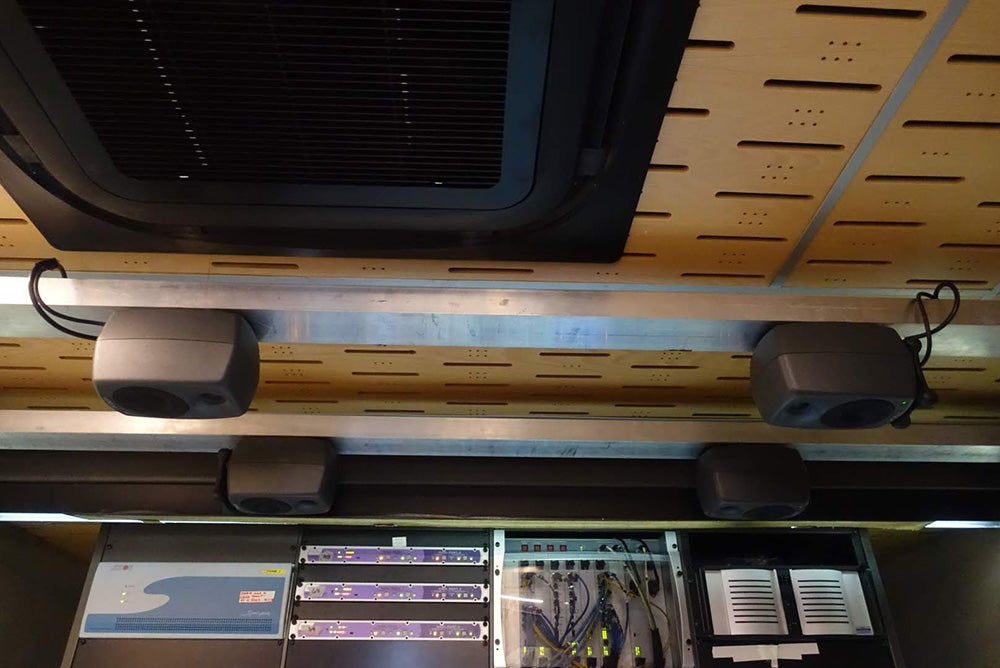 The Atmos speaker configuration in the main broadcast truck

“Typically, they’re taking a 5.1 main output of the console and then they’re linking to a four-channel independent main output that’s driving the height speakers [in a 5.1.4 configuration]. When you turn the volume up and down, they sort of move together. You’re independently bussing into the 5.1 or the heights. In effect they’re travelling in two separate parts, and in the consoles we create a blur boundary between the 5.1 and the heights so it doesn’t feel like two things that are caked into each other.”

“If you’ve got something in the 5.1 plane − an audience mic − then that absolutely doesn’t exist in the height plane. Nothing that’s in that plane is allowed to exist up there [in the heights] and nothing that exists up there is allowed to sit down there [in the 5.1 plane], because the minute you allow something to appear in both, your brain just goes “I know that’s that, that’s not immersive anymore, I believe that’s around me, not above”. So we’re trying to create unique feeds for all the speakers, and in trying to do that, it has that natural, staccato kind of feel about it.”

Related: Behind the scenes of Dolby Cinema at the Odeon LUXE Leicester Square

If the production of the festival sounds complex, the transmission of the broadcast is even more so.

“We transmit our picture in four quadrants, so it’s 4, 3G, SDI quadrants, where our picture exists and that’s stitched together to make a UHD image”, McCue conveys. 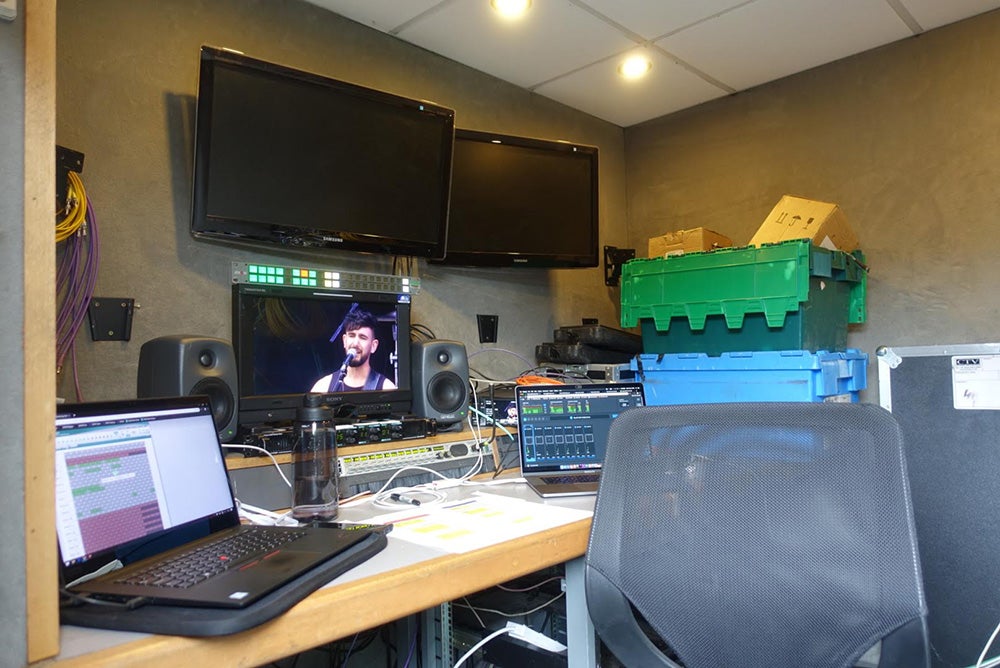 “So what we do for our 5.1 customers is create a Dolby Digital-based 5.1 mix that travels in one of those quadrants; for our Atmos customers we’re making a [to paraphrase] a Dolby Digital+ running in the other quadrant.”

“While they travel in tandem together, they go through the plant completely separated. What’s in the UHD is ultimately making the HD, so that has to be Dolby Digital-compliant all the way through to the [Sky Q] set-top box. That’s where you choose whether you want it to be Dolby Digital or Dolby Digital+ (i.e Atmos).” 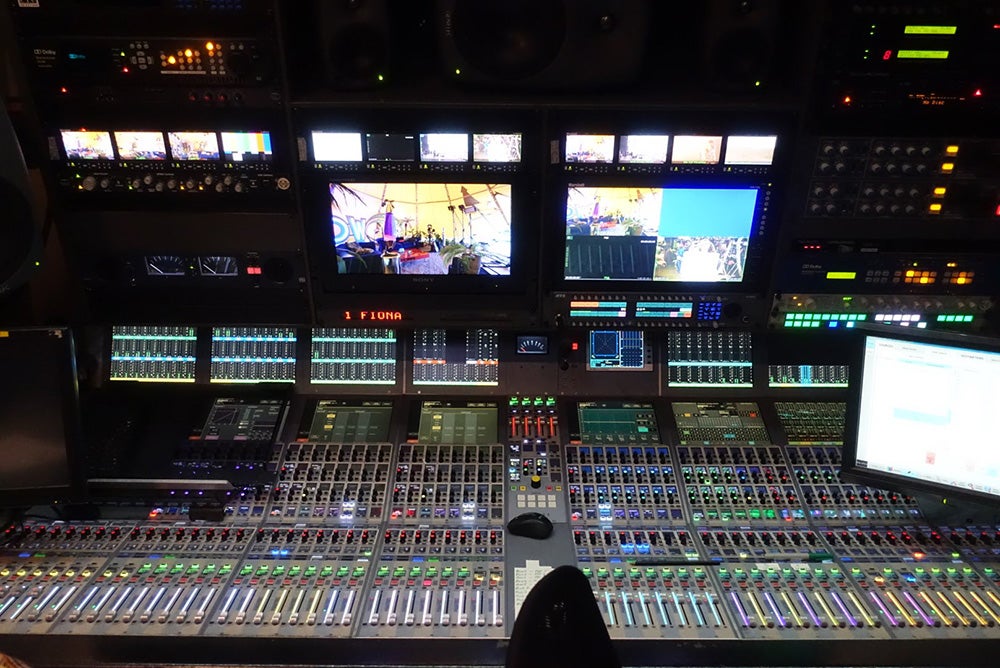 Ultimately, this is about capturing the experience of the festival in a way that works for the “the many”. The uptake of Atmos-compatible equipment is growing, with soundbars the likely pathway for getting Atmos into people’s living rooms.

Options are growing with Sony’s HT-ST5000, Samsung’s HW-N950 at the more expensive end and cheaper efforts from Vizio indicating there’s a demand for an experience more convenient than knocking holes in the ceiling or a speaker package with up-firing speakers that takes up space.

As a result, McCue said “what we’re trying to give a soundbar experience a fair crack at being immersive by making things a lot spikier and sharper, so it has a chance to bounce around the room.” 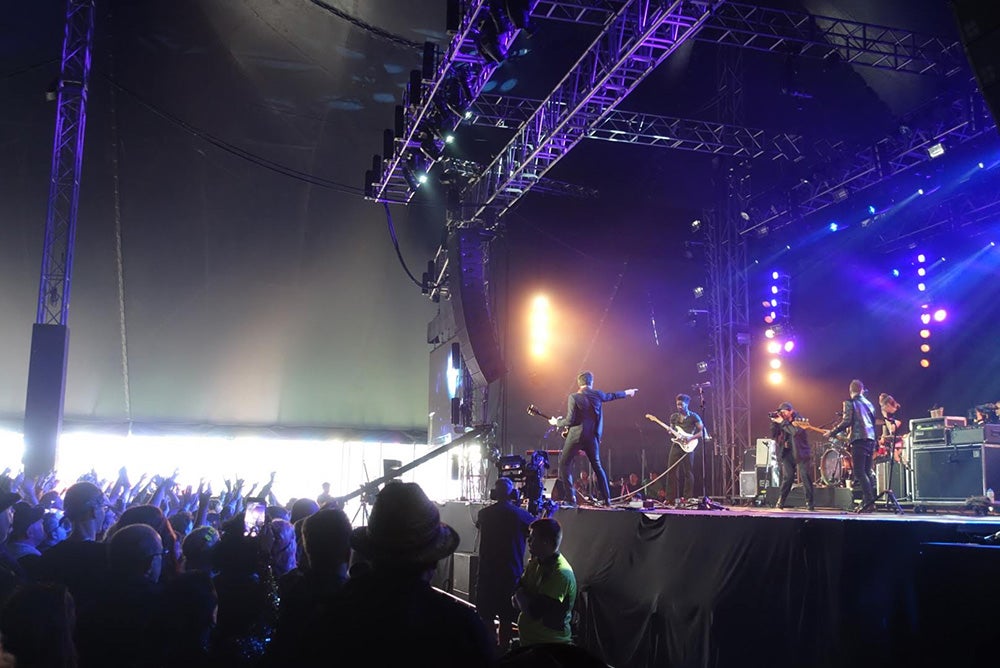 Miles Kane putting on a performance at the Big Top

That doesn’t mean AV receivers or speaker packages lose out. According to McCue, “they’d get the exact experience we’re monitoring in the trucks. We’re monitoring both the music truck and the main presentation truck and we’re saying we’re happy with it in this environment. What we’re aware of is that if we try to sharpen things up, sharpen objects up, they’ll have a better chance to get clear of the soundbar and match the wall of sound from a big rock band.”

“We’re fully committed to making better experiences for those customers who want those experiences. So it’s like, get it right for the most, but push for the rest.”

What does the future hold? 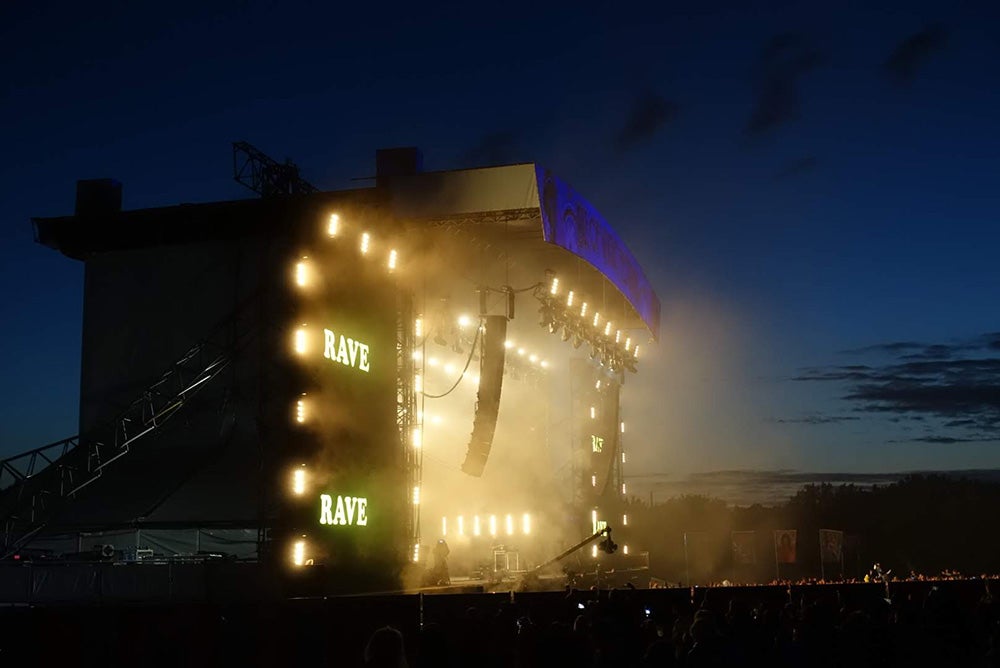 Looking forward to next year’s Isle of Wight Festival, McCue notes “there’s suspicions that we think we’d like to try. Again, there’s a lot of pressure for the sound mixers. In some cases, they’re trying to get a 40-channel band on air from a sound check of one song. And the expectation is that it sounds perfect on TV straight away.”

On the Dolby side Power reflected that “we’re seeing increased interest from the music industry in exploring Atmos,” in reference to the deal announced in May with Universal Music. Earlier this year, at the Bristol Hi-Fi Show, Trusted Reviews was treated to classic songs from artists such as Public Enemy, The Beach Boys and Elton John in the format.

With events, TV shows and films being presented in the format and music tracks in the offing, the presence of Atmos is growing. And with more options to get it in the home, the signs point towards Atmos being here to stay.