With the HT-ST5000, Sony has produced a sensational audio system. It asks little of its user, requiring next to no set-up and managing content – from 4K to DSD – automatically. If you listen to High-Res Audio, you’ll feel suitably rewarded, and movies and TV shows sound immense. The only real caveat is that sense of Dolby Atmos immersion, or rather lack of it (an observation that probably applies to any 2.1 Dolby Atmos implementation). All things considered, I could certainly live with the compromise.

Don’t bother with the HT-ST5000 is you’re nursing a budget 40-inch telly. This is a full-width (1.18m) flagship soundbar that’s unashamedly ostentatious.

Lavish and lush, it looks superb. The fabric cover is removable so that you can admire the drivers. A pair of gold-rimmed, high frequency tweeters sit left and right, while a tweeter flanked by mid-range squawkers takes centre stage. Top mounted, behind metal grilles, are upfiring Dolby-enabled speakers for Dolby Atmos and Surround duties. 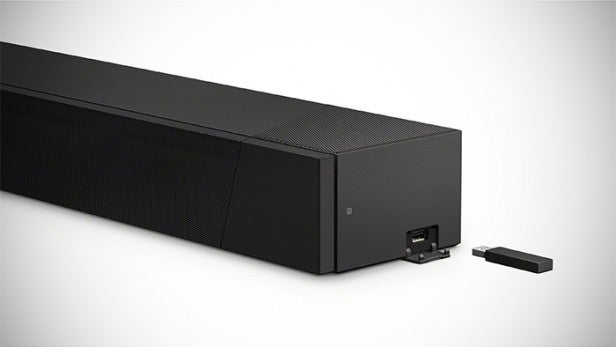 Even the wireless subwoofer, usually a cosmetic afterthought with 2.1 packages, is suitably premium. No mere MDF box, it features a forward-facing grille, matte lid and sits on a stylised plinth. Inside, there’s a forward-forward facing driver and large downwards-facing passive radiator. During setup it connects automatically with the soundbar, a green LED glowing in confirmation. 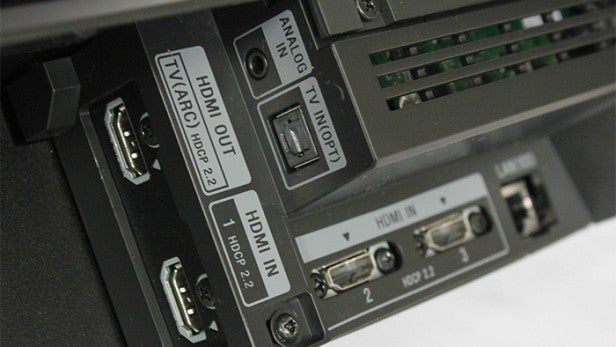 Connectivity is generous. Look to the rear and you’ll find four HDMIs, one ARC-enabled. All support HDCP 2.2 for 4K sources.

There’s also provision for an optical digital audio connection, stereo via minijack and ethernet. Wireless credentials include dual-band Wi-Fi, NFC, and Bluetooth with LDAC (Sony’s own high-bandwidth protocol). If you’re wondering where the USB port is, it’s hidden on the right edge of the bar.

While most users will plonk this beauty in front of a screen, there are keyholes on the rear for wall mounting if you prefer. 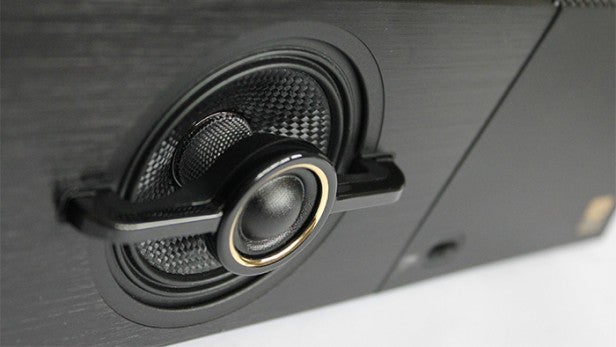 Functionality mimics that of an AV receiver. This is reflected by a tiled user interface which lists input options, plus connected home network devices. The Music Service List actually comprises just Spotify and Chromecast Built-in (formerly known as Google Cast).

Unlike the average AVR, though, the system doesn’t come with any calibration mic. There are some settings you can modify, such as Distance, Level and ceiling height, but it’s very much plug and play.

While the HT-ST5000 is clearly intended to be used with High-Res Audio content, you can upscale compressed audio using Sony’s mildly effective DSEE HX processor. There’s also a DRC (Dynamic range compression) control, but this should be left off. A range of rather well-designed audio presets can be applied to all sources.

Seismic. Sublime. Sort-of-surroundy. All these can be used for the HT-ST5000. It is, by and large, a beautiful-sounding audio system, able to create a wide, stereophonic soundfield.

It should be stressed that Dolby Atmos here is not directly comparable to that from an AV receiver running speakers in a 5.1.2 (or greater) configuration. Dolby itself refers to Atmos as an ‘experience’ that adapts to the hardware it plays on – and that’s what you get.

This is evidenced by a Dolby authored Atmos test disc which features an audio-only fly-over of a 747 jet. The HT-ST5000 reaches high, but doesn’t convincingly convey a sense of direction. Consequently, the plane doesn’t appear to travel, but ascends like a VTOL Harrier Jump Jet. 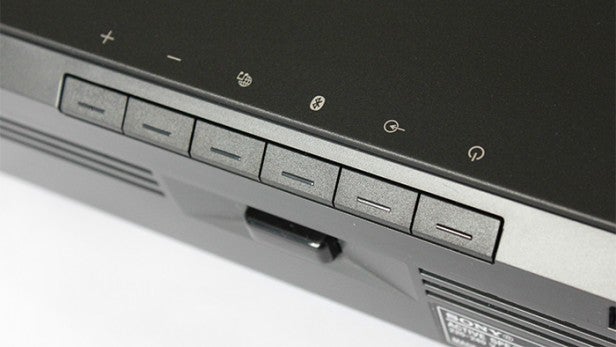 Sonic immersion is dependant on the listening position. Ideally, I found sitting around 1.5m from the soundbar, with a ceiling height of some 2m, gave the best results. At this point I enjoyed wide, high stereo, with Cinerama-style ear-tickling (back in the Sixties, Cinerama used three projectors to create an expansive curved viewing experience).

Spatial definition within this stage is outstanding. This is particularly effective on the opening to Mad Max Fury Road (Blu-ray). Those ‘Where are you?’ echoes clearly stand apart from Max’s narration. Run-of-the-mill soundbars just can’t delineate this well. However, when the War Boys roar in, they don’t jump from back to front, but enter from the wings. 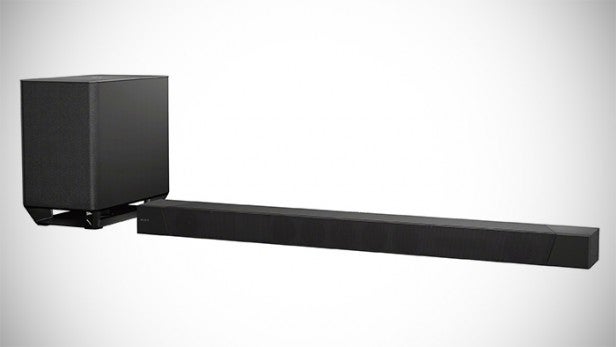 If you don’t own that much Atmos software, you’ll still benefit from the HT-ST5000’s speaker configuration. Height-scaling can be applied to all sources, so those upfiring speakers are always trying to add scale and depth.

Legends of Jazz, featuring Jane Monheit and John Pizzarelli, is a Dolby 7.1 mix, featuring a silky vocal, and a double bass that has the subwoofer dancing. The HT-ST5000 does a splendid job recreating the intimate concert ambience of the track, using its upfiring speakers to enhance the acoustic elements.

The HT-ST5000 is surprisingly accomplished with music sources, streamed, cast or from disc. A 24-bit 96kHz FLAC vinyl rip of Rust in Peace (Megadeth), filtered via the 3D Surround preset, becomes a delicious assault. By way of contrast, String Quartet No.16 in F major, by the Belcea Quart (FLAC 96kHz 24-bit) is an altogether more civilised affair. There’s a lightness to those high-res tweeters which is elegant in the extreme. 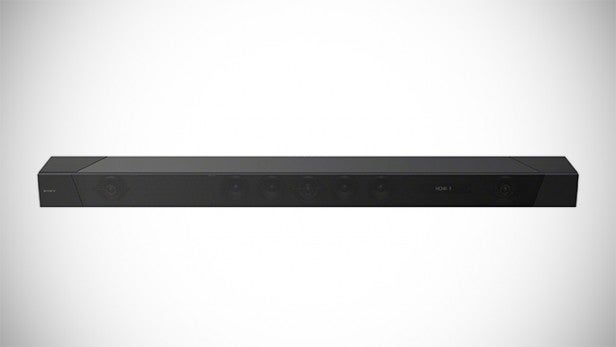 While some of Sony previous 2.1 packages have suffered from a lack of bass, that isn’t the case here. Alice Cooper’s School’s Out (FLAC 44.1kHz 16-bit) has the subwoofer vibrating my floor like a volleyball team in a high-school gym. The sub genuinely drops low, thrumming at 31.5kHz, and vibrating room fittings at 50 Hz. The soundbar crosses over at 100Hz. 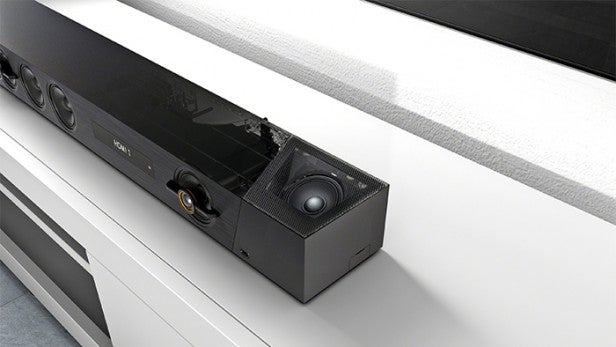 Unsurprisingly, the system is at home with DSD. Marianne Thorsen’s Mozart Violin Concerto in D Major sounds wonderful. There’s a definition to its presentation which goes a long way to justifying the system’s eye-watering price tag. The same track in FLAC 44.1kHz 24-bit lands a little heavier through the sub, but the clarity remains as entertaining.

If you’re after a no-compromise 2.1 sound system, few sound better or are as well equipped. This Sony boasts enormous clarity and the kind of dynamics you’ll want from your movie soundtracks. It goes loud but sounds smooth, and has a prodigious LFE performance. It’s also great with music – rock, classical, polkas, it’s refined enough to cope with all.