Full regional pricing for these models hasn’t yet been released. So far, just an indicative price for a specific configuration of the Asus ROG Zephyrus G GA502 (with a 512GB SSD and 16GB of RAM) has been given.

Currently, Asus isn’t saying anything more than “Q2 2019” for all models, so we can expect these to go on sale this summer.

What is the Asus ROG Zephyrus range?

Zephyrus is Asus’ range of slimline gaming laptops. They’re designed to serve those folk wanting to switch between PC gaming and photo and video editing on the go. As such, they weigh significantly less than most gaming laptops, while still offering a level of performance comparative to heavier gaming machines from the ROG Strix line.

Laptops in the forthcoming 502 range follow the usual Zephyrus standard of featuring a black and grey chassis with glowing lights, which can be set to glow and shine in tandem with the best gaming mice that use Asus’ Aura Sync software, such as the Asus ROG Gladius II.

To avoid attracting the wrong kind of attention in the office or at a meeting with clients, it’s possible to dial back the flashing lights on a ROG Zephyrus laptop to make it  look just like your standard black business laptop. Asus is certainly hoping that mobile workers who want to get in a bit of Metro Exodus in their spare time will flock to pick up a Zephyrus laptop – they certainly don’t weigh as much as your typical gaming laptop, that’s for sure. 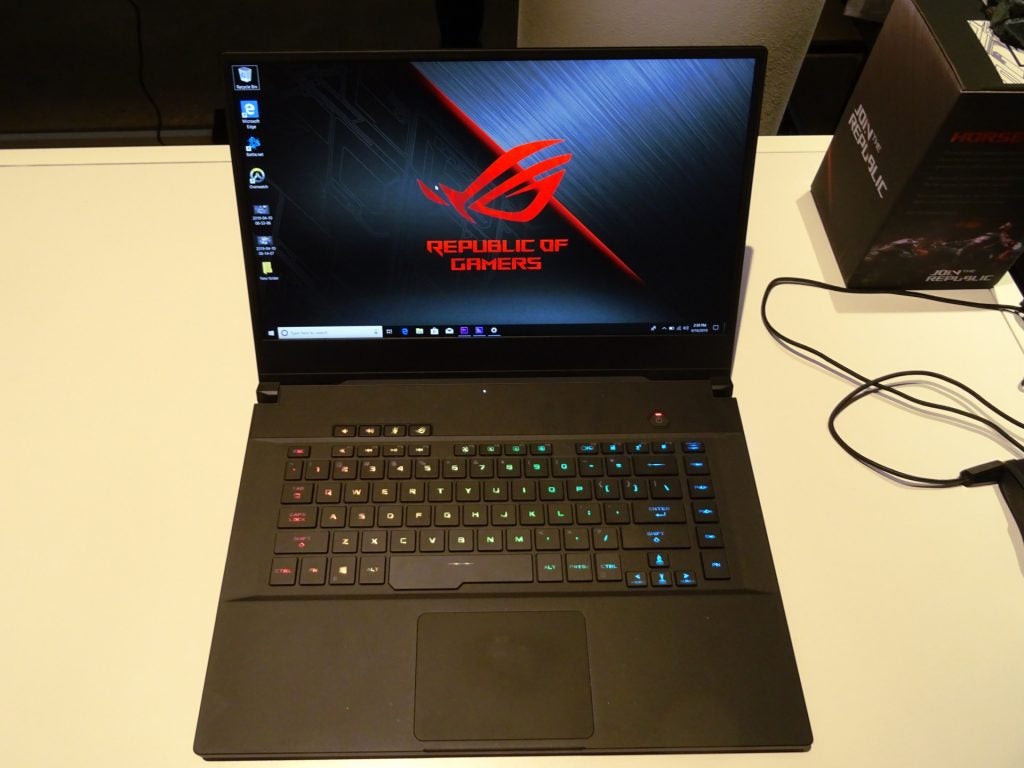 As with the ROG Zephyrus S GX501, you get an Asus ErgoLift-style hinge, which sees the rear end of the laptop raised up from the desk’s surface for better airflow. This complements a system of six heat pipes for the CPU, GPU and power circuitry, as well as dedicated heatsinks for each processor unit.

Two display options will be available – 144Hz and 240Hz – with both supporting Nvidia’s G-Sync technology, which aims to keep the screen’s refresh rates locked to the frame rates the GPU’s pushing, and an anti-glare coating. As with premium laptops such as the ZenBook Pro 15, the displays are Pantone rated, suggesting that the Zephyrus S GX502 will be great for photo and video work as well.

As with the GX501, Asus GPU switch feature returns, which means the device can be set up to automatically hop between using the dGPU when gaming and revert to integrated graphics for less intensive tasks. Asus says that this will give you up to eight hours of battery power – which, if true, is excellent for a gaming laptop. 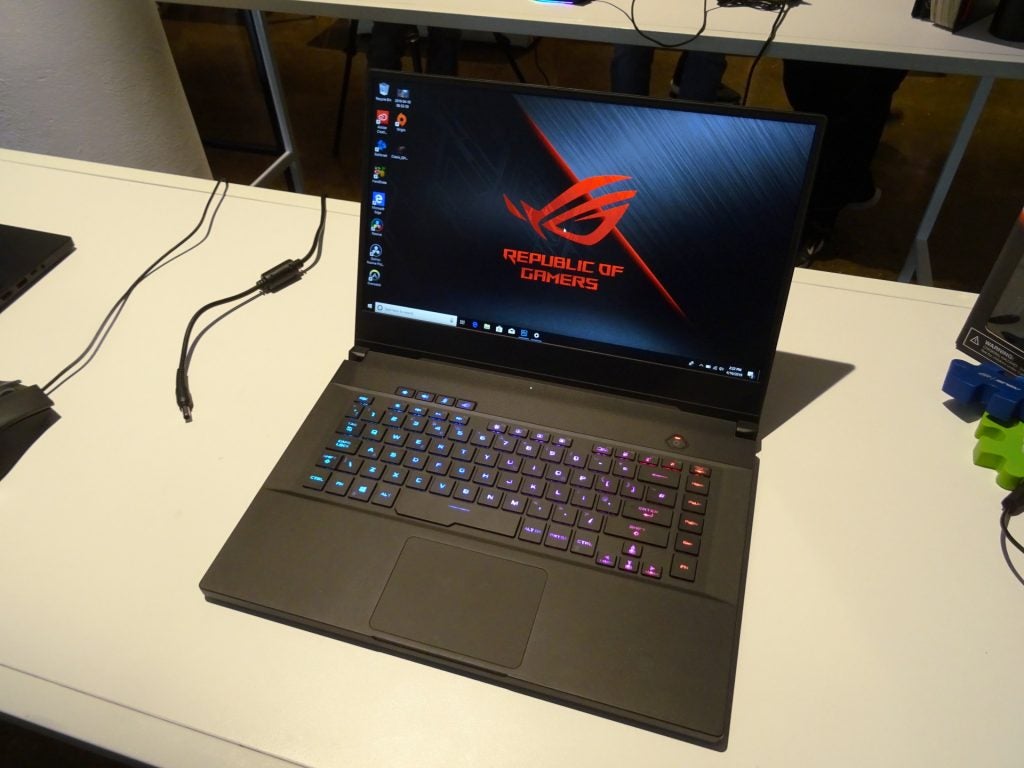 Following the Zephyrus S GX502 is the Asus ROG Zephyrus M GU502, the midfielder of this trio. This model features the same six-core Intel Core i7-9750H processor, storage and memory options as the GX502, and also an 15.6-inch Full HD display. In terms of dimensions it’s identical, so it won’t take up any more space in your bag – but it’s 100g lighter.

Key differences include graphics options, which see you able to pick from RTX 2060 and GTX 1660 Ti, as well as a slightly different design which, while featuring dedicated heatsinks and air pipes, doesn’t come with a hinged body for improved airflow.

The display is also Pantone-rated, which means if it’s anything like similarly rated Asus panels we’ve reviewed before, colour accuracy should be high, as will contrast and coverage of popular colour spaces. Asus is promising that 100% of the sRGB gamut will be covered here, which is a pretty bold claim. If true, this would put this screen on a par with the display that features in the 2018 Apple MacBook Pro 13-inch.

Asus is making no claims about the battery performance of the Zephryus M, but mentions that the same GPU switch feature is present here. In theory, then, you should get a similar performance to what you would with the GX502. 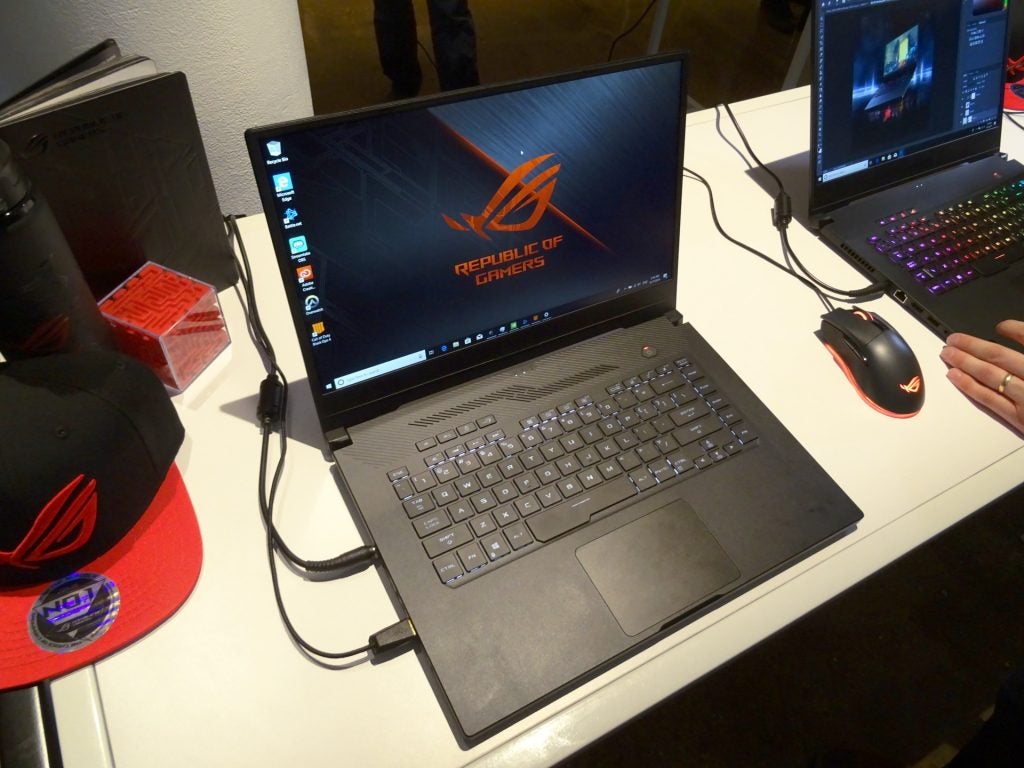 Last but not least is the Asus ROG Zephyrus G GA502, which is the more affordable entry-level option of the 502 range. As such, the specs here aren’t quite as eyebrow-raising. That’s not to say they’re not good – all signs indicate that the Zephyrus G will be an excellent value-for-money proposition.

Asus says that this power-efficient setup will give you close to nine hours of battery power – 8hrs 48mins, according to the official spec sheet. Proof, of course, will be in the benchmarking.

While this G unit isn’t quite as generous in terms of storage – it comes in 256GB and 512GB options only – the SSDs are M.2 NVMe PCIe types, so game and app launching times should still be minimal. You also get 32GB of DDR4 2400MHz RAM, so you shouldn’t get bogged down when multitasking or editing multiple photos on this laptop. Since the Zephyrus G GA502 is intended to double as a work and gaming device, the underkey lights are all-white, instead of the showy RGB lights of the other two devices in this range.

In terms of display quality, Asus is proud of the fact that it’s been able to cram a 15-inch Full HD IPS displays into the kind of chassis you’d normally see on 14-inch laptops. Display options are limited to 60Hz and 120Hz options, which, while not as out there as the 240Hz displays of the more powerful 502 laptops, will be plenty enough for the likes of Apex Legends.

While the ROG Zephyrus GA502 features a brushed metal finish, it isn’t fashioned from the same magnesium alloy of the Zephyrus S GX502 and Zephyrus M GU502 . It’s becoming increasingly common to see magnesium used in laptop design; magnesium carbon bodies, such as the one seen in the LG Gram 2 in 1, allow for a degree of flexibility, durability and lightness that isn’t possible from an all-aluminium body.

All three laptops are pretty light, skirting around the 2kg mark. By laptop standards this isn’t heavy; it’s very lightweight compared to gaming laptops that can typically weigh around 3-4kg.

The keyboards here are all set squarely at the centre of the laptop’s deck, with the trackpad bottom-centre – which will no doubt please anybody put off by the position of the keys on the GX501. 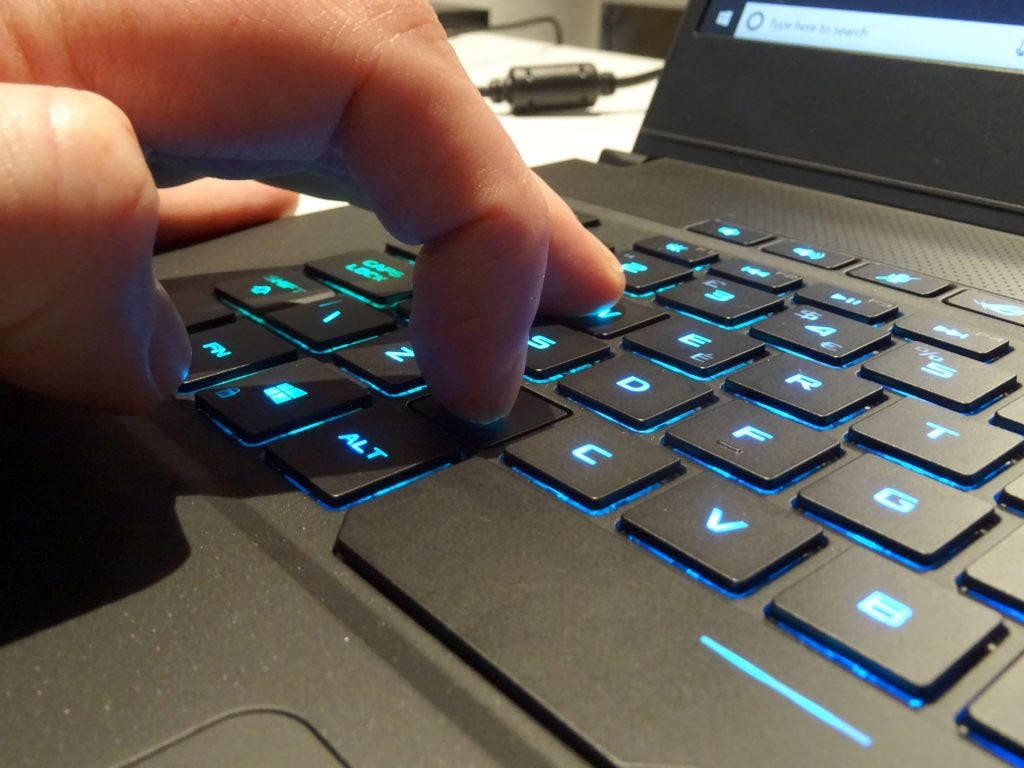 Here are all the specs for the Zephyrus S GX502, Zephyrus M GU502, and Zephyrus G GA502 features that Asus has released so far:

We will update this range guide as and when review samples become available and we’ve been able to test the new Asus ROG laptops.

What do you think about the new ROG Zephyrus range? Let us know on Twitter @TrustedReviews.