What is the Asus ROG Gladius II?

The ROG Gladius II is Asus’ high-end gaming mouse that includes some pretty hardcore extre features. It features RGB lighting that creates an underglow effect for added desk appeal, and can be customised to match personal taste.

Despite its strengths however, it is quite expensive; priced just shy of £80. Some may argue that the detachable cable is invaluable, and many will appreciate the swappable clicks under each mouse button. But I can’t help but feel that Asus could have reduced the number of niche features in exchange for a lower price point, and made a more attractive package as a result. 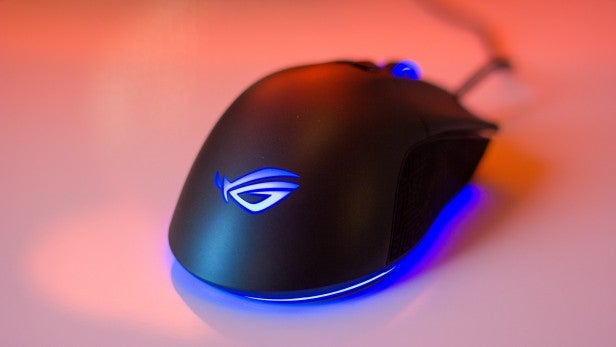 The Gladius II is a mid-sized mouse and comes equipped with a total of seven buttons. The design matches the rest of the Repuplic of Gamers’ premium peripherals, with a metallic finish on the top section of the mouse, and Mayan inspired etchings on the rubber grips on each side.

As you would expect from a gaming mouse in 2017, you’ll also find plenty of RGB lighting on the Gladius, with three zones of lighting. You’ll find the bottom of mouse fitted with an underglow effect similar to Neons in Need for Speed (thanks for the throwback, Asus), as well as the illuminated ROG logo and scroll wheel on top. I actually really like what Asus has done here, as it’s a great-looking piece of kit. 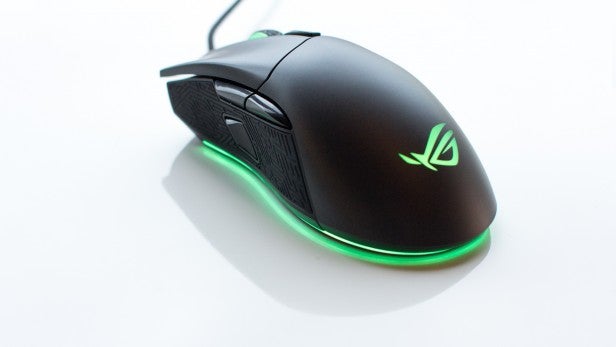 The materials used throughout the Gladius II provide everything you would expect from a luxury product, and feels great in the hand. It’s relatively small and lightweight, but is easy to manoeuvre as a result. I would prefer if it were a bit wider, though, as I found that I didn’t really have much anywhere to rest my pinky finger.

The left hand side of the mouse has a total of three buttons, with a sniper button sitting alongside the usual backwards and forwards buttons. I’ve always been a huge fan of this approach, as activating the sniper button lowers the DPI of the mouse, enabling a greater level of precision when required.

The top of the mouse houses the left and right clicks, which have an arched design that let your fingers rest naturally in place. The rubber scroll wheel also adopts the Mayan pattern, with a precise scrolling action that can be pressed to activate its click. The last button is the DPI switcher, and it’s located just below the scroll wheel. It’s built with a slight ridge, and is finished with a glossy plastic.

The underside of the mouse stars the 12,000 DPI optical sensor, four pads and a modification switch. Flip the switch and you can start taking the mouse apart, allowing for the swapping of the Omron switches underneath the left and right clicks.

Asus includes additional switches in the box and seems to be very proud of this feature. Its marketing blurb says it increases the longevity of the mouse, and allows for worry-free hammering in hectic games. I’m not personally convinced by the feature, however, as it adds extra cost for something that most users will likely never use. 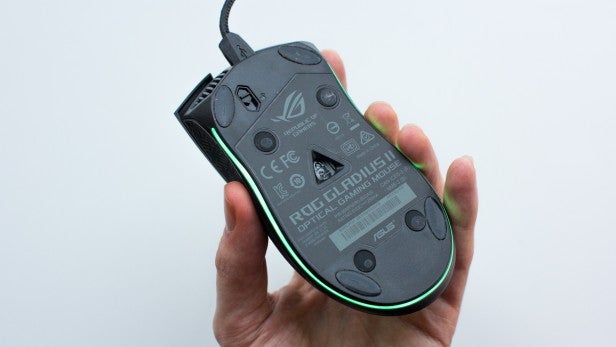 In my three weeks of testing, I’ve been very impressed with the Gladius II. The mouse glides easily over surfaces, and can be quickly flicked when required. The mouse packs a 12,000 DPI sensor with 50g of acceleration, and polls 1000 times per second. The combination of which provides a very pleasing in-game experience, with smooth scrolling and a snappy response time. Each mouse button is also satisfying to use, though it should be noted that I did occasionally knock the DPI switcher when in frantic firefights.

It normally takes at least a week to adjust to a new mouse, but I actually became comfortable with the Gladius almost immediately. Throwing 25 hours into Mass Effect Andromeda, I found the Gladius II coped well in all scenarios. Setting the general and sniper DPI to 1800 and 800 respectively, I was able to easily storm the Kett strongholds; carefully lining up ranged headshots before charging in with a shotgun. If you’re a shooter fan, you’ll likely to love this mouse. If you do require a lot of extra buttons however, you should look elsewhere. 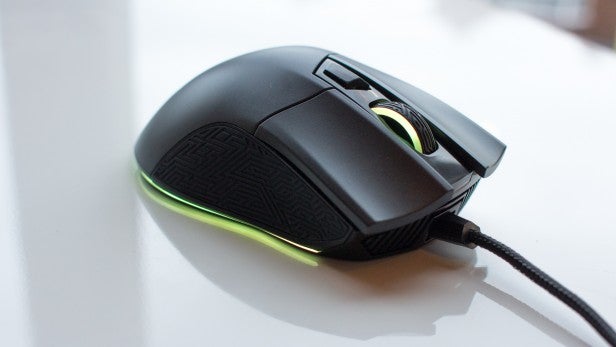 The software side of Asus’ peripherals is usually their Achilles heel, but the ROG Armoury suite is definitely getting better. It comes with a clean user interface that’s easy to use and relatively feature-rich, and is significantly less buggy than when it launched.

It’s here that you that you can customise performance, re-assign buttons and set various RGB lighting effects. The software did crash on me a couple of times, though. What’s weird is that its RGB features don’t hook into Asus’s Aura software as well as I’d like. If you have an Asus-centric RGB build, you can sync it all together from a single app, but you’ll need at least two pieces of software for precise control.  It’s quite frustrating (albeit a niche problem) as it stops Aura Sync from becoming the the best RGB solution on the market. Hopefully, as has already been proven, this will improve over time. 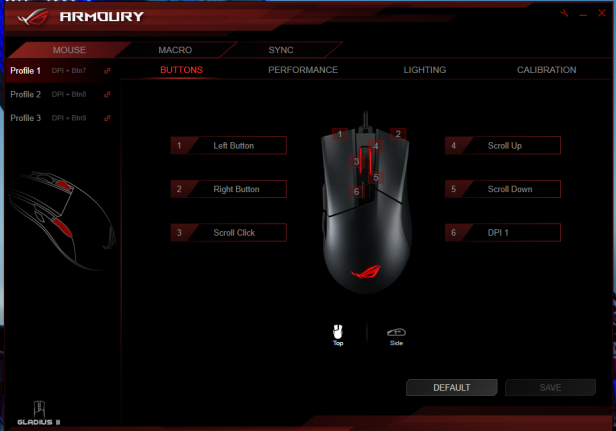 Should I buy the Asus ROG Gladius II?

The Gladius II is the best mouse Asus has made to date. It’s very well-crafted, looks great and performs exceptionally well. In fact, it’s a product that nails the ethos of the ROG brand – high-end performance with a luxury feature set. The closest competitor is the Corsair M65 Pro RGB, though that significantly undercuts the Gladius II at £60 RRP. The M65 also has adjustable weights and superior software, though it does lack the removable cable and switch replacement of the Gladius II.

Overall, it’s hard to fault Asus here. If you have a large sum to spend on a gaming mouse, and want something that will stand the test of time, then the Gladius II is a great choice. But if you want something similar at a lower price point, there’s some very strong competition.

One of the best wired gaming mice on the market, but you pay for it.