What is Assassin’s Creed Unity?

Assassin’s Creed Unity is a brand new entry in the series, coming exclusively to next-gen consoles and PC. We’ve been lucky enough to get see some hands-on preview footage at E3 2014, revealing the next-gen enhancements being brought to the series.

Following the success of Assassin’s Creed 4: Black Flag at the end of last year, Ubisoft has announced Unity as the first Assassin’s Creed game for 2014, with the game set in the French Revolution.

According to Ubisoft CEO Yves Guillemot, Assassin’s Creed Unity is a “major entry in the franchise’s history” and will introduce “great new innovations” to the well-established game series.

We’ll keep this page updated with all Assassin’s Creed Unity news, so keep it bookmarked if you want to stay in the loop for any new trailers, screenshots or other news. 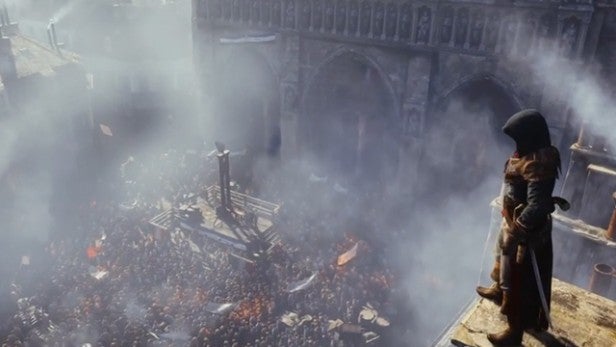 From our preview at E3 2014, the graphical improvements are clearly visible. Of course, Assassin’s Creed: Black Flag was already a beautiful game, but the billowing smoke, floating light particles and other small, but significant visual effects just put the icing on the cake, even at this stage. You can read our full first look Assassin’s Creed Unity review, but we were blown away by the game’s focus on realism.

“From everything we’ve seen so far, Assasin’s Creed Unity is the most immersive and realistic Assassin’s Creed game to date. Massive crowds with unique reactions help build the tension of the restless pre-French Revolution Parisian population, while the graphics and lack of loading screens aid realism.

The Assassin himself is more nimble than ever before and the reworking of the combat and free-running systems make for a very promising game.” 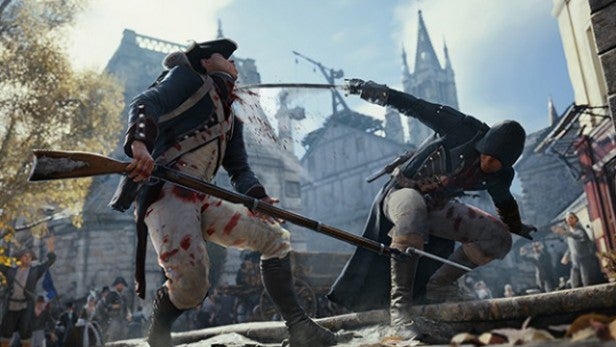 Assassin’s Creed Unity Release Date: When is it out?

The Assassin’s Creed Unity release date has been pencilled in for some time in ‘Holiday 2014’. This albeit loose launch window was revealed by the game’s first teaser trailer, which is embedded below.

The game will launch later this year for the Xbox One, PS4 and PC only, marking the series’ first “next-gen only” title.

“We have been working on the new Assassin’s Creed for more than three years and although we weren’t quite ready to show you our full vision for a next-gen only AC, it seems Abstergo are trying to force our hand!” read the Ubisoft statement when first announcing Unity. “Stay tuned – we’ll have many more exciting details for you in the months ahead.

This would fit with the usual Assassin’s Creed launch schedule, which has seen Ubisoft release each game in the autumn of each year like clockwork. However, the game could be pushed back if the developer thinks it isn’t up to scratch.

“If we think we’ve ended up with a 70 per cent Assassin’s Creed game, we’re not going to ship it. That damages the brand,” said Ubisoft North America president Laurent Detoc to IGN. “You bring something fresh, but you have to bring quality too.” 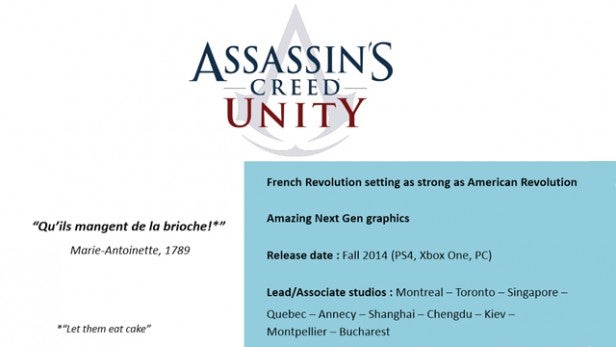 Has been in development for over three years
Helping to cement the game as a “major entry” to the Assassin’s Creed series, it looks like Ubisoft has been beavering away on AC Unity for quite some time. Over three years in fact.

“We have been working on the new Assassin’s Creed for more than three years, and wanted to find the perfect time to give you an early taste of the game,” said Ubisoft when launching the first AC Unity teaser trailer.

Not only has the game been in development for over three years, but Ubisoft also revealed the game is being worked on by 10 different subsidiaries across the globe. Ubisoft Montreal is taking lead, but nine other internal studios are providing assistance: Toronto, Singapore, Quebec, Annecy, Shanghai, Chengdu, Kiev, Montpellier and Bucharest. 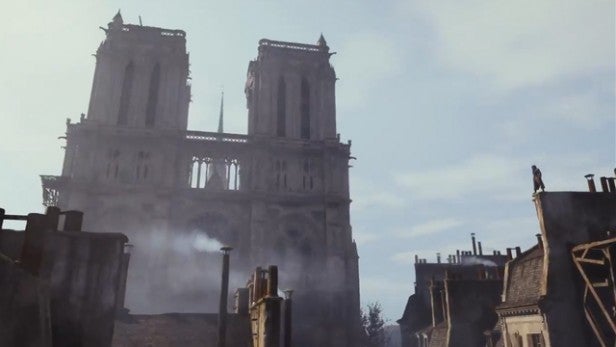 To begin with, Ubisoft released a teaser trailer for the game created using alpha footage of Assassin’s Creed Unity, revealing a little of the game’s setting, but not much actual gameplay.

As for actual gameplay footage, there was an extended trailer shown during the Ubisoft E3 press conference, revealing the graphic enhancements of the game and some of the new, more realistic, mission options.

Missions can be picked up and added to your Quest log whenever you discover them in the game, even during campaign missions. If you’re doing anything aside from storyline missions, you can drop what you’re doing and pick up a different side quest if you find a more interesting one.

As for the gameplay, Ubisoft has tweaked the control system to make it easier to traverse the Parisian landscape. Instead of only being able to swan dive from the top of buildings you can now hold right trigger and B (Xbox One) to skilfully descend buildings, swinging from poles and finding handholds with one swift movements until you reach ground level. Just as you can climb buildings.

The combat has also been mixed up quite a bit, mostly because Ubisoft has done away with the previous counter system. Instead you’ll be able to press B to push back enemies, giving you a bit of time to carry out attacks. Ubisoft claims the new fighting system will make combat more engaging and reactive than in previous Assassin’s Creed titles.

A huge new feature for Assassin’s Creed Unity is four-player co-op, where you’ll be able to team up with three of your mates to carry out attacks on enemy strongholds and even tackle missions.

All multiplayer missions will be accessible to play solo throughout the storyline, each given their own star ratings. Of course, Ubisoft advises you tackle the harder ones with your friends, especially as they’ve been specially designed to be played with multiple people. It will be interesting to see how this mixes up the Assassin’s Creed Unity gameplay.

Ubisoft has been quite quiet on the storyline and setting for Assassin’s Creed Unity. Well, apart from the fact the majority of the game will be set during the French Revolution.

During its annual earnings presentation, Ubisoft stated Unity’s “French Revolution setting [is] as strong as [the] American Revolution” setting of Assassin’s Creed 3.

The French Revolution setting can be clearly seen in the teaser trailer above, with Parisian landmark Notre Dame playing a pivotal role in the alpha footage.

Thanks to the game’s next-gen and PC exclusivity, Unity will also boast “amazing next-gen graphics”.

According to rumours, the Assassin’s Creed Unity Assassin will be a brand new character called Arno. Nothing has actually been confirmed yet, but there have been several sources that corroborate the Arno name. 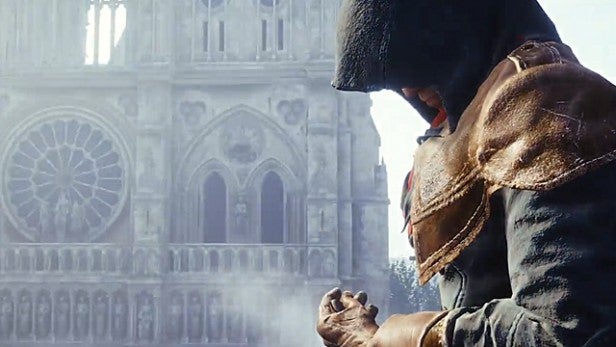 Although Ubisoft has only revealed one Assassin’s Creed game for 2014, rumour has it that Unity will be complimented by an Xbox 360 and PS3 game, currently codenamed Assassin’s Creed Comet.

Apparently, the game will take place in North America, feature the nautical exploration so key to Assassin’s Creed 4: Black Flag and star a playable Templar rather than the traditional Assassin.

This character will allegedly be called Shay, who is a sailor and a Templar, which has been leaked from several separate sources.

There are also rumours Assassin’s Creed Comet will take you at some point to 1758 New York, where Black Flag’s Adwale and Assassin’s Creed 3 Haytham Kenway, along with other notable AC characters, will play a role in the game.

The game will supposedly be a direct sequel to Assassin’s Creed Black Flag and launch sometime in 2014 like Unity.

“The title [Assassin’s Creed Unity] will be released this fall on Xbox One, PS4 and PC,” Ubisoft CEO Yves Guillemot said during the Ubisoft investor’s call. “We have not disclosed our plan yet for the Xbox 360 and PS3 SKUs, however we have made it clear as a company that we will expect to continue supporting both consoles for the foreseeable future.”