Apple has confirmed its is holding a ‘Hi, Speed’ event on October 13, where it is sure to reveal the iPhone 12 5G. However, speculation suggests we could see a bevy of additional announcements. Here’s what to expect…

The first ever iPhone 5G

Apple like to tagline its events with veiled hints over what to expect. Sometimes they’re obvious, sometimes less so. The ‘Hi, Speed’ monicker is as blatant as they come. It’s almost certainly a reference to the next-gen 5G connectivity that would be a first for the iPhone range – or any Apple product for that matter. 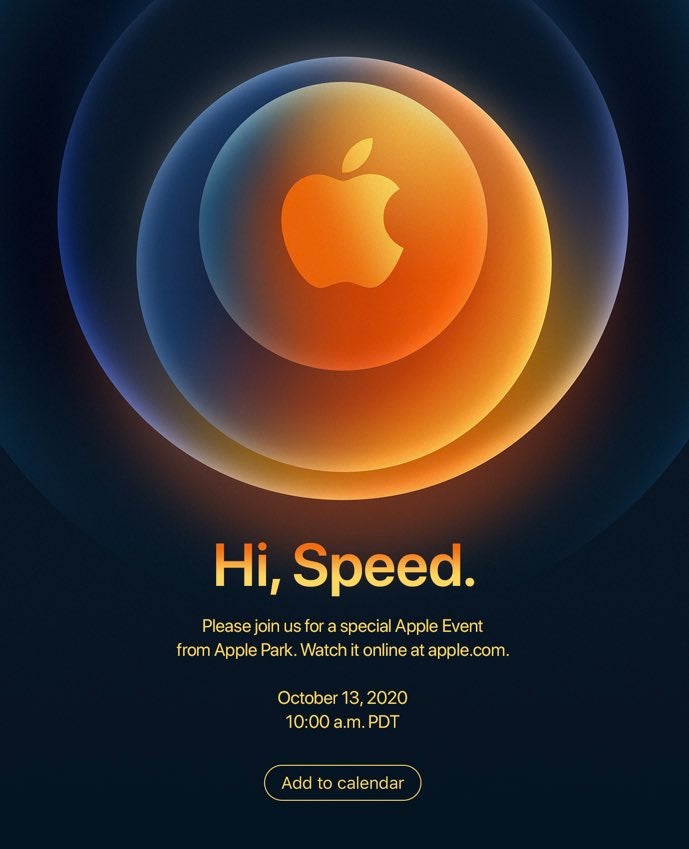 If the iPhone 12 doesn’t show up on October 13, it would be a gigantic surprise. The device has been delayed due to the coronavirus pandemic and was absent from an event last month when Apple refreshed its iPad and Apple Watch lines.

This year there’s expected to be four new iPhone, revealed at once for the first time in the history of the range. They are as follows:

Apple has already revealed its A14 Bionic processor, which will power the devices. It’s not clear yet whether all four models will pack 5G or whether LTE variants will be offered.

One of the hints provided by the invite (above) concerns iPhone 12 colours. Rumours of a midnight blue iPhone 12 may be further substantiated by the invite design. Whether the orange elements point to another new colourway remains to be seen. However, we’d consider that less likely.

It it finally time to tag in Apple AirTags? Apple’s long-awaited item trackers have been expected all year, so surely we’ll see them here? Expectations were heightened by the event invite, which features a circle with an Apple logo in the middle. The new Tile rivals are also expected to be circular.

The rings featured within the invite could potentially be construed as audio waves, meaning the rumoured smaller, more affordable Apple HomePod Mini speaker may be on the way. The firm has also been tipped to reveal AirPods Studio over-ear headphones.

At WWDC this summer, Apple announced plans to transition from Intel processors to its own ARM-based Apple Silicon processors. The company suggested the first of these could be out before the end of 2020. Will see see the rumoured return of the 12-inch MacBook powered by Apple Silicon here?

What else are you hoping Apple will unveil during the Hi, Speed event? Share your wishlist @trustedreviews on Twitter.