A refreshed lineup of Acer Swift 2018 laptops have been unveiled at IFA 2018 in Berlin. We cast an early eye over the Swift 7, Swift 5 and Swift 3 upgrades.

All three new Acer Swift 2018 laptops are ultra-portables and should find themselves positioned as some of the lightest laptops in the world when they launch this autumn. These are aimed at those don’t fancy lugging about a back-breaking rucksack around, but still need something that can handle the basics with aplomb.

Check out our full range guide below to find out which is best for you.

Called the “thinnest laptop in the world” by Acer at IFA, the new Swift 7 2018 will steal the mantle from the previous iteration of the Acer Swift 7, which wasn’t released all that long ago.

At just 10mm thin and weighing 1kg, the Swift 7 is as ultra-portable as they come and looks ideal for on-the-go working and long-distance travel.

Its bezels have been squashed down to a bare minimum, with the machine boasting a 92% screen-to-body ratio. There’s no word on the device’s exact screen size just yet, with Acer tight-lipped on its specs, but something similar to the existing Swift 7’s 14-inch Full HD IPS display seems logical.

In fact, the only specification that Acer has revealed so far is that the Swift 7 2018 will be toting an 8th-generation Intel Core i7 processor.

The price and release date are also yet to be announced, but we’ll be sure to update you once we receive further information. 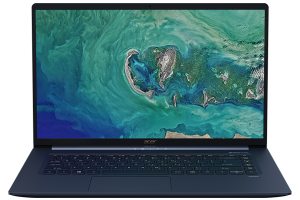 Acer seems to love breaking records, and so following the Swift 7’s lead, the company revealed that the Swift 5 2018 will likely become the world’s lightest 15-inch notebook when its wafer-thin bezels start hitting shelves later this year.

Weighing only 990g and measuring up at 14.9mm thin, it should be dead easy to fit this in almost any laptop bag, with the aforementioned 15-inch screen set to offer a Full HD resolution (1920 x 1080 pixels).

Despite its featherlight form, the Swift 5 still packs some power with the 8th-generation Intel Core i7-8565U and i5-8265U processors, and can reportedly keep chugging on for eight hours.

The 15-inch model of the Swift 5 will be available to buy in Europe this November at a base price of €1099, and in America on January 2019 from $1099.  The 14-inch model, meanwhile, will be made available sooner – the European launch is pegged for this September with a starting price of €999. 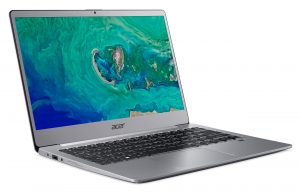 Also joining the new Acer Swift 2018 range is the Swift 3 laptop, with the new model boasting – you guessed it! – even slimmer bezels than before.

Both 13.3-inch and 14-inch models will be available, and you’ll have the option to grab the Swift 3 come with integrated 4G LTE connectivity, so you carry on browsing the web when you’ve left the comfort of your Wi-Fi-connected home. That should make it an ideal Netflix companion, with the 1920 x 1080 pixel display sounding perfectly serviceable on paper.

Bear in mind, though, that using 4G will deplete the Swift 3’s battery rather quickly, so you’ll want to have it hooked up to Wi-Fi to reach Acer’s claimed 13-hour battery life. The 8th-gen Intel Core processors and 8GB RAM should ensure the Swift 3 ticks along smoothly, too.

The Swift 3’s hardly a powerhouse, but the option of a NVIDIA MX150 graphics card at least gives you the option of casual gaming.

Both models of the Swift 3 will be launching in Europe this year, with the 13-inch version arriving in October for €799, and the 14-inch variant hitting stores in November for the same price.

Like the other Acer laptops here, there’s still no word on a UK price, but we’ll update this guide one we have more information.

Excited about the new Acer Swift 2018 range? Let us know on Twitter @TrustedReviews