The Best of IFA 2018: All the greatest gadgets from IFA Berlin this year

IFA, Europe’s biggest technology show, has come and gone for another year, with Trusted Reviews having now returned from the show floor after checking out all the latest consumer gadgets and innovations. Here’s everything you’ll really want to know about from Berlin this year, starting with our Best of IFA 2018 Awards.

It was a big year for both phones and TVs at this year’s IFA. Multiple companies showed off 8K TVs and we also saw big new handset announcements from the likes of Sony and Huawei.

Best of IFA 2018 Awards: This year’s best gadgets and innovations

It was tough to choose our Best of IFA 2018 Awards, but the following stood out from the crowd and represent our worthy winners across key categories like laptops, smartphones, TVs and more.

Read on for our complete coverage of IFA 2018 Berlin. Note that some content may now appear outdated, as the event has concluded.

Huawei has officially unveiled its latest phablet, the Huawei Mate 20 Lite. The phone sports a 6.3-inch FHD+ screen with a resolution of 2340 x 1080, a brand new Kirin 710 processor, and 4GB of RAM. The phone has a budget friendly £379 price tag and should see a release in October.

Alongside the Mate 20 Lite, Huawei also had a couple of more minor announcements. It announced its new Kirin 980 SoC, which is expected to power the Mate 20 Lite’s bigger brothers the Mate 20 and Mate 20 Pro, and an intriguingly named ‘AI Cube’ which combines an Alexa speaker with a 4G LTE Wi-Fi router.

Read all about the announcements in our guide to Huawei at IFA. 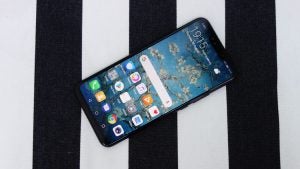 Sony launches Xperia XZ3, and a host of new headphones

Let’s jump straight to one of the week’s big reveal at IFA: Sony’s latest flagship, the Xperia XZ3. Check out our Xperia XZ3 hands-on review for our early impressions, see how it matches up to Sony’s early-2018 flagship in our Xperia XZ3 vs Xperia XZ2 comparison, or relive all the action as it happened by checking out our Sony Xperia XZ3 launch live stream guide.

Outside of phones, the Japanese giant also had a number of Sony headphones to show off, including the new noise-cancelling flagships, the WH-1000XM3, its SP900 true wireless sports earbuds and its ultra-premium IER-Z1R in-ear monitors. 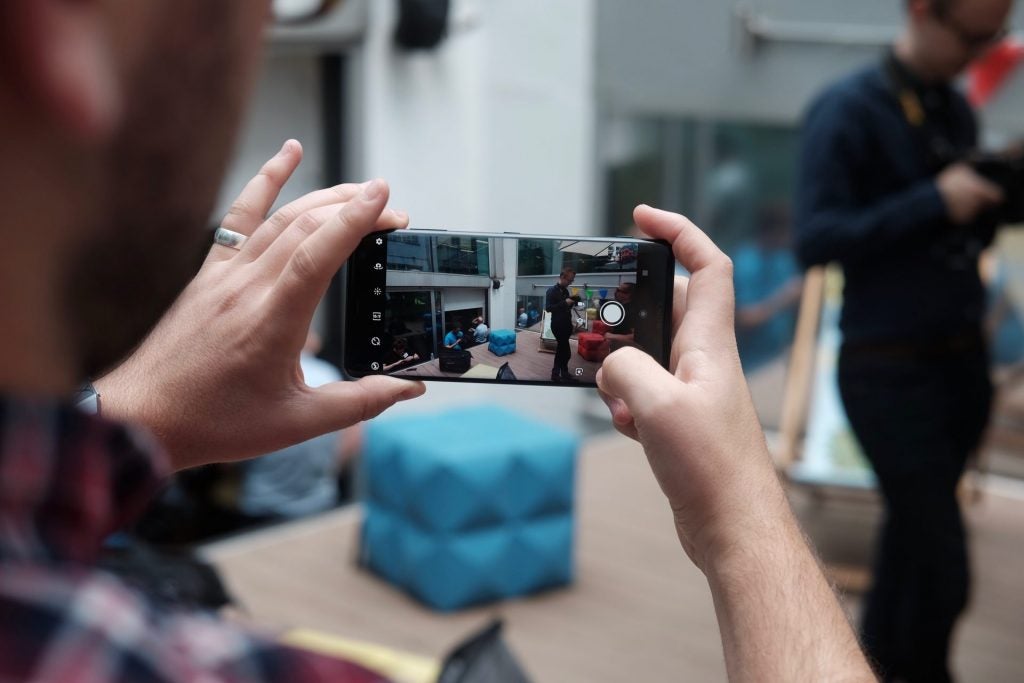 South Korean tech giant Samsung may have already stolen the show at IFA, revealing at 8K TV that will actually go on sale this year.

Yes, you read that right – this isn’t a working prototype, proof of concept , or anything else related to technological snake oil: you’re going to be able to buy the Samsung Q900R 8K TV, provided you’ve got deep enough pockets.

The future-facing set will start hitting shelves (including in the UK, we understand) as soon as September, and we’ll be getting more familiar with the set as the day progresses, so stay tuned for more! 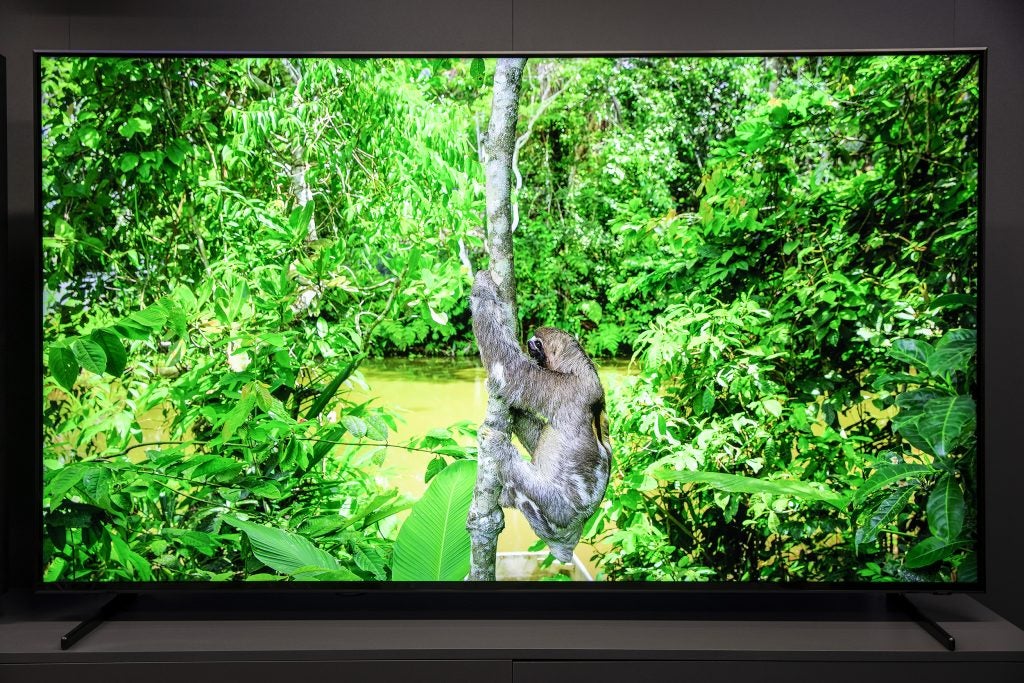 Acer has gotten off to a flyer at IFA this year, revealing a host of new products across it computing ranges.

The new Acer Swift laptops are probably the headline act so far, with the Taiwanese firm slimming down its  existing Swift 7, Swift 5 and Swift 3 notebooks even further as it bids to find a place in your heart (and rucksack) this year.

Then there’s the Acer OJO 500 Windows Mixed Reality headset. While partly aimed at businesses, we’re nevertheless intrigued by the promise of a modular VR device with a detachable head strap and headphone-free audio and can’t wait to try it on for size.

Elsewhere, there’s new gaming gear courtesy of the company’s Predator and Nitro ranges. There’s some new Acer gaming monitors, but the real highlight is – for maybe the first time in IFA history – a gaming chair.

Except it’s not just any ole’ gaming chair. It’s the Acer Predator Thronos, which more closely resembles (we imagine) the cockpit of a TIE fighter. Don’t just take out word for it though, have a good gawk at it for yourself. 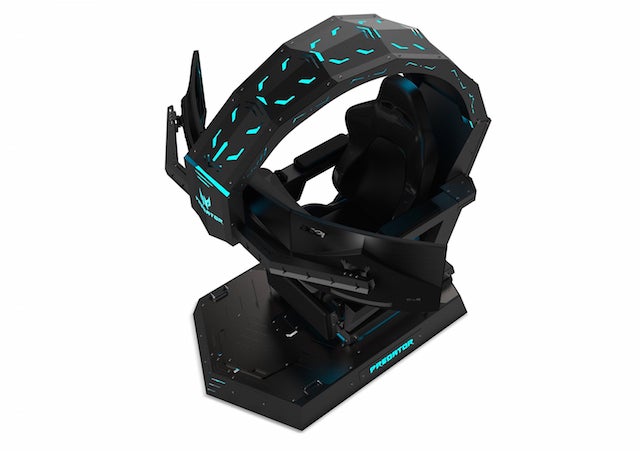 Or do we actually want to walk away with the Acer Predator Triton 900? The 4K 2-in-1 features the Taiwanese firm’s latest Aeroblade fans, which – get this – are inspired by owl feathers.

Sadly, we weren’t able to try it out properly (as you can see, it was drooling room-only in Berlin), but if ever there was a silver lining, it’s that this means it’ll likely pack Nvidia’s new Turning GPUs and Intel’s forthcoming 9th-Gen Core CPUs when it does launch. 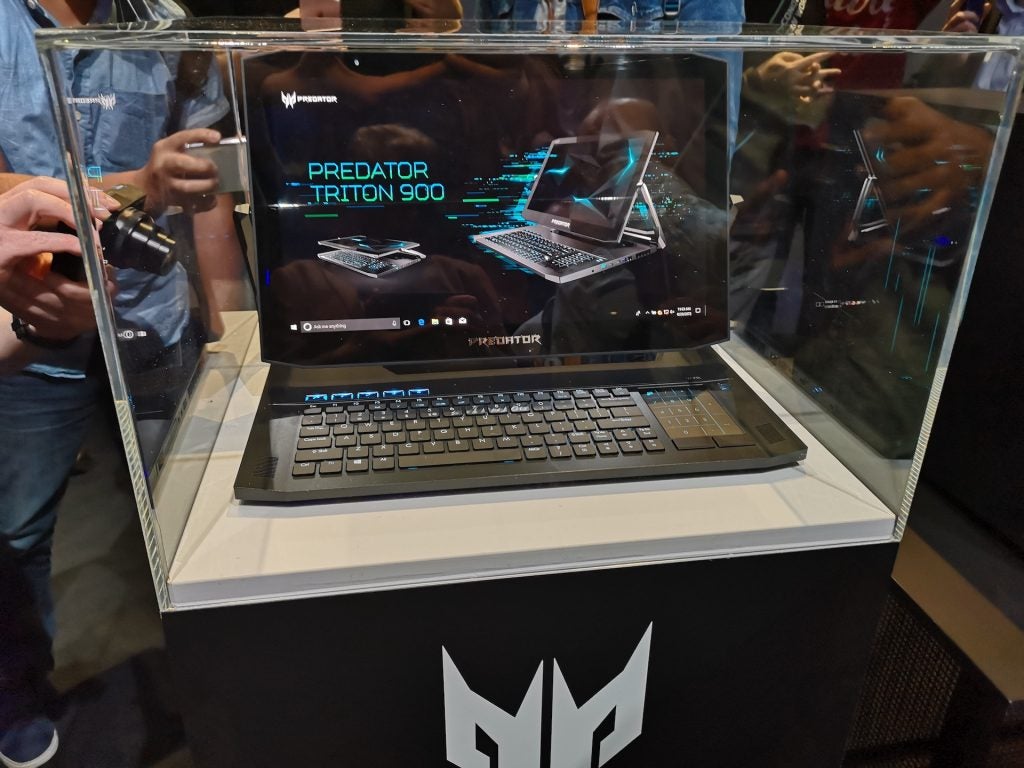 LG has kicked off IFA 2018 with a bang, unveiling an 8K OLED TV at the Berlin showcase. Boasting a whopping 7680 x 4320 resolution, it packs more than 33 million pixels into its 88-inch frame, with the South Korean chaebol hailing its new set as the “world’s first 8K OLED TV.”

To our eye, this  would appear to be an accurate claim. Though rival manufacturers like Panasonic and Samsung have shown off 8K TVs in the past, these tellies haven’t utilised the OLED display technology that LG has helped bring to prominence in the TV world by way of excellent efforts like the LG c8 OLED.

While an exciting development, what isn’t clear at this stage is if LG’s new 8K OLED will ever hit the consumer market. LG has said it expects the 8K market to start to really take off by 2022, but it hasn’t attached a price, release date, or even product name to the TV, so it could be that it’s little more than a prototype – we’ve reached out to LG for clarification and will report back as soon as we learn more. 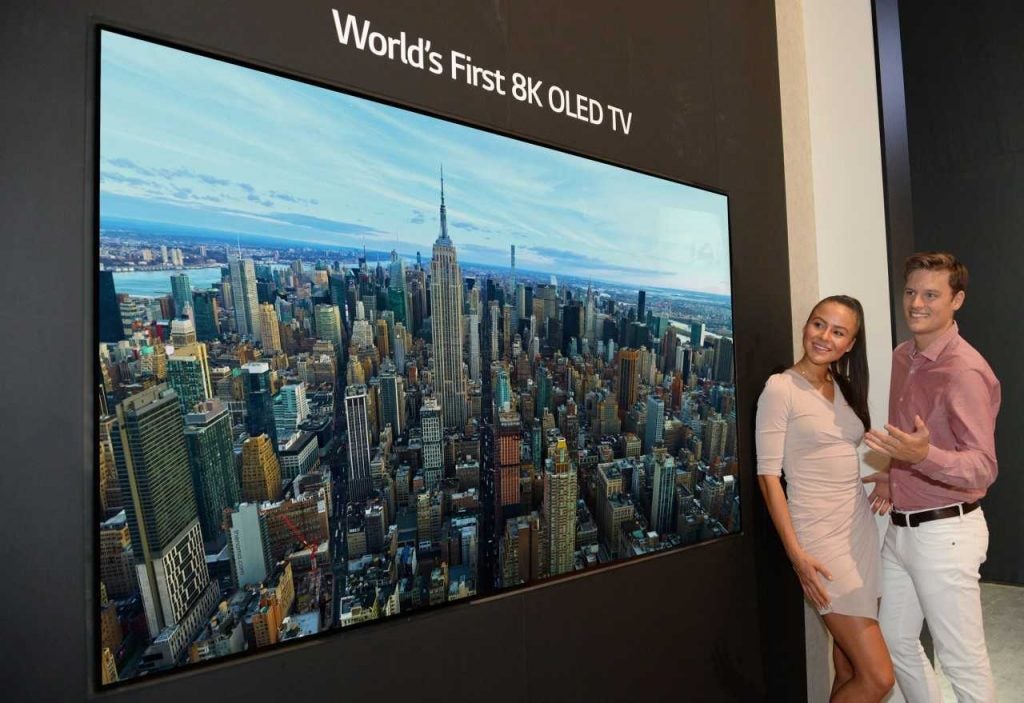 On the ground with us in Berlin? You can see LG’s 8K OLED for yourself at booth in Hall 18 of the Messe Berlin.

Developed in collaboration with noted designer Michael Anastassiades, it’s a £2900 aluminium beast that can either sit on the floor like a piece of furniture, or be hung on the wall as a piece of sound-emitting artwork.

Inspired by the shape of the classic pound coin, the Beosound Edge isn’t just breathtaking to ogle – its got some seriously nifty features worth writing home about, too.

The big talking point is that you can rock it back and forth to adjust the volume, or if you prefer more traditional controls, there’s a touch interface built-in to the frame. In terms of components, it’s no slouch, packing a 3/4-inch tweeter, two 4-inch midrange drivers for 360-degree sound, and a a 10-inch woofer on one side. B&O also claims the Beosound Edge offers the world’s ‘first active bass port’, which fuses two classic speaker design concepts – closed box and ported – into one, while wireless compatibility comes in the form of  Bluetooth, Airplay 2 and Chromecast support.

As you’d expect from a stunning B&O speaker that stands out from the crowd in pretty much every way imaginable, all this doesn’t come cheap, with the Beoedge Sound set to retail for £2900 when it releases in November 2018, or €3250 in continental coppers. 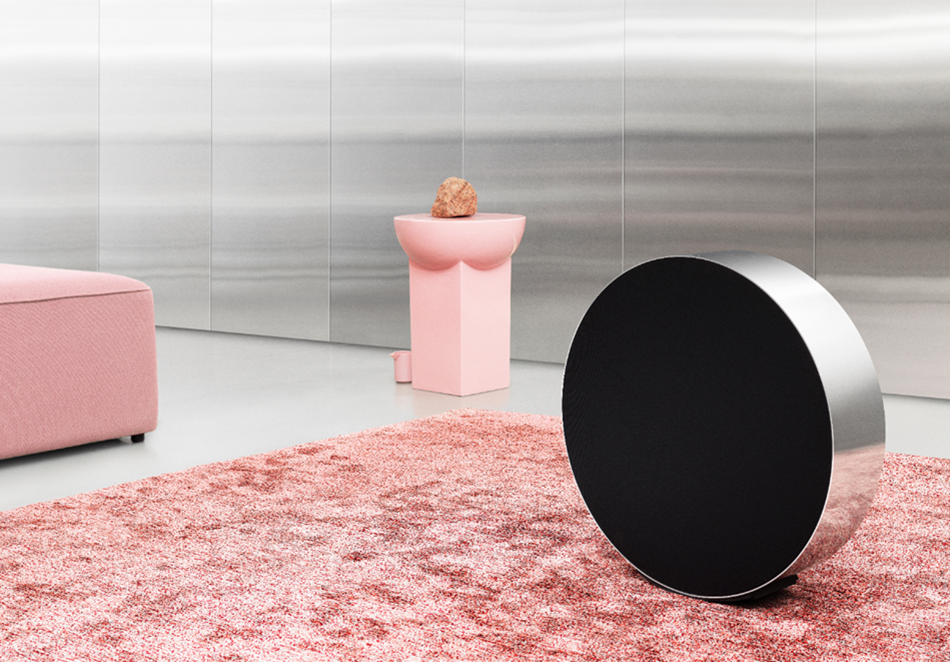 Those are just some of the early IFA 2018 highlights – there’s been loads more going on Berlin, and things are only just getting started!

The most noteworthy of these might be the updated Dell XPS 13. Already one of the best laptops of 2018 in the eyes of Reviews Editor Alastair Stevenson, the refresh adds the new chips to Dell’s already impressive PC package and should mean improved battery life and mobile performance. The Dell XPS 13 2-in-1 is getting a boost, too, and we’re looking forward to getting our hands on both devices in the very near future.

Not to be left out of the action, we’ve also seen a number of Acer laptop announcements at this year’s show, along with Lenovo‘s IFA laptop offerings (including the Yoga Book C930, the Yoga C930 and the Yoga C630). Lenovo also announced an update to its augmented reality Star Wars game which offers a Kylo Ren-inspired lightsaber.

If you want to get any of these laptops connected to the internet, then why not give Netgear‘s Orbi Voice a look? This addition to the Netgear Orbi lineup is also an Alexa speaker, so you can flood your home with Wi-Fi alongside the voice assistant.

If B&O’s gorgeous but pricey Beosound Edge doesn’t quite fit your budget, you’ll want to know about the latest smart wireless speakers from affordable Danish brand Libratone. The Zipp 2 and Zipp 2 Mini are Bluetooth bellowers with added Alexa smarts and, at a more modest £279/£229 (respectively), well worth checking out – we gave the first Libratone Zipp a strong 8/10 score in our review, so there’s pedigree here for the price point.

Speaking of Bluetooth, Qualcomm had a new aptX standard to announce, which should eventually make the process of connecting your audio devices that little bit less painless since AptX Adaptive will be able to intelligently adjust itself based on your surroundings and needs.

Finally, it just wouldn’t be IFA without some white goods and Sharp has delivered something pretty interesting, a washing machine that tracks your usage and is able to intelligently order cleaning supplies via Amazon Dash. Now you just need to remember to do your washing in the first place.

IFA 2018 Dates: When is IFA being held in Berlin this year?

IFA 2018 will run from August 31 through September 5, with most of the big announcements tipped to take place at media events held between August 29-31.

What’s your highlight of IFA 2018 in Berlin so far? Share your favourite new gadgets with us on Twitter @TrustedReviews.