With an aluminium unibody, the Acer Swift 3 promises to be lightweight, flexible and durable, something which every laptop maker seems to be striving for these days.

There’s also the possibility of extra connectivity via integrated 4G LTE, but as we don’t have any details from any UK networks on this just yet, how much of a benefit that’ll actually be to British buyers is debatable. 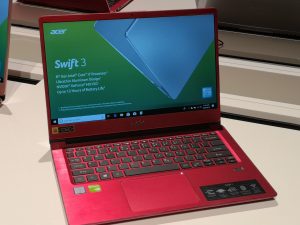 In my brief hands-on time with the Acer Swift 3, which weighs less than a kilogram, I was able to easily pick it up and hold it between my thumb and index finger. Gently grabbing a corner of the bezel, I put that flexibility to the test and it is pretty impressive. The device feels well made despite being light and should survive the average wear and tear expected of a laptop.

I’m not sure if it’s quite as durable as the magnesium-lithium alloy bodies of the new Swift 5 and Swift 7, so if you’re a little more prone to accidents than most, one of those might be worth investigating.

Being made from aluminium, the Swift 3 feels has a nice premium feel to it. Personally, I’m not sold on the metallic red of the particular model I got to play with. Luckily, more standard silver and rose gold versions will be available.

The keyboard feels nice to type on and while the overall size and layout is a little small for my liking, I liked that the Enter and Shift keys were nice and big. The layout feels sensible and there’s not a great deal of travel on the keys. I feel that most people would be comfortable writing essays, reports and articles on this. 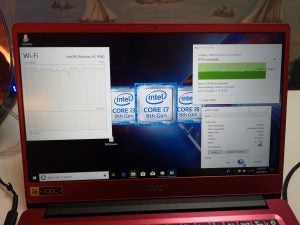 As I couldn’t connect to any Wi-Fi I wasn’t able to browse or stream anything at Acer’s booth. But, at a previous event, I was able to witness Intel’s Yuriy Kozachuk perform a 10GB data transfer between the new Swift 3 and a NAS drive via 1.7Gbps of wireless throughput. The transfer was done in just over a minute. Watching Netflix in HD on the Swift 3 will be no sweat.

It seems like Intel’s claims of gigabit Wi-Fi are true, though you’ll need a compatible router.

I should also point out that, the Swift 3 and the NAS were mere inches away from the router (a Netgear Nighthawk X10 R9000), so how that’ll hold up in the real world, with a few metres distance between the devices, not to mention radio frequency-impeding, walls, microwaves, human bodies and so on remains to be seen.

Here’s all the official specs we have to hand right now – note that these are incomplete and we’ll update this as soon as we can:

The Acer Swift3 SF314-56, in addition to having room for an HDD, will also apparently feature an extra-large touchpad typically found on a notebook with a 15.6-inch display. 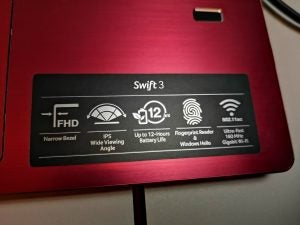 Prices for all versions of the 2018 Acer Swift 3 will start at €799, which converts to about £720 at the time of writing. No further pricing info is currently available.

Acer says that the new 2018 Acer Swift 3s will launch in Europe, the Middle East and Africa at some point in October. We’ve yet to hear any more from Acer about availability and note that the release date of the new Whiskey Lake Swift 5 has been pushed back for EMEA markets. Whether this happens to the 208 Swift 3 as well remains to be seen. 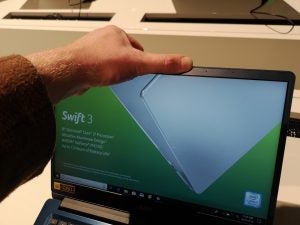 Seeing one of these effortlessly handle a 10GB file transfer was very impressive. For people who need to work on the go, particularly people who shoot and edit video, this will be a real plus. As for how the Acer Swift 3 handles the rest of that supply chain – i.e. actually handling the editing and rendering – remains to be seen, but Intel’s promised us a boost in this department, too. I’m a little less keen on the flexy metal body, but maybe that’s just me. It definitely doesn’t feel ‘cheap’ and I do love how lightweight the Swift 3 is.