Acer’s 2018 Swift 5s are incredibly light, but don’t be fooled by the skimpy exteriors. There’s the latest 8th gen Whiskey Lake Intel processors running everything and, unlike a lot of thin laptops, you get an HDMI along with three USB ports.

Fashioned from a magnesium-lithium and magnesium-aluminium alloys, the Acer Swift 5s should withstand a fair degree of punishment. We may well be in for a vogue of manufacturers fashioning flexible laptops from magnesium alloys soon – last week we got to see some newcomers to the LG Gram series, which are about to land in the UK, and these too are bendy, bashable magnesium laptops.

The Acer Swift 5 looks to be a solid competitor to the LG laptops. Originally due to go on sale in September, we’re now waiting on confirmation from Acer about availability of the new Whiskey Lake Swift range. 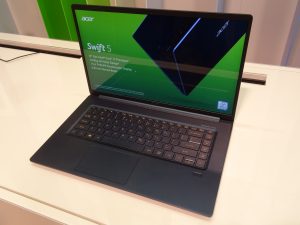 Acer’s proudly saying that the Swift 5 is the ‘world’s lightest notebook PC’ and, while I didn’t have a set of electronic scales with me to test that claim out, I think they may be right. The lightness of the Swift 5 is uncanny. When I first picked one up on Acer’s booth, I was convinced that it was a dummy model, until a few taps of the keys proved otherwise.

The Acer Swift 5 is spookily light, a lot lighter than its size would suggest. That lightness is apparently in part due to the magnesium-lithium alloy used for its chassis. This elemental blend apparently allows for a killer combination of lightness, flexibility and durability, one that’s been proven to be effective in the various stress tests Acer’s subjected the new Swift range to.

While I didn’t dare see how durable it was by knocking it off the desk or flexing it at the corners (Acer staff tutted when I tried), I was able to easily parade it around in one hand, as you can see in the pictures. It feels reassuringly solid, too. I felt as though if I did drop it, everything would be fine. 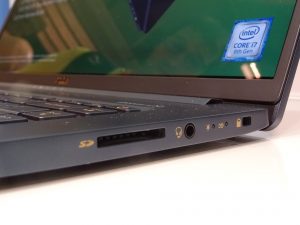 There’s going to be two versions hitting markets, with 14-inch (heading to Europe, the Middle East and Africa) and 15-inch screens (heading to North America and EMEA) respectively. 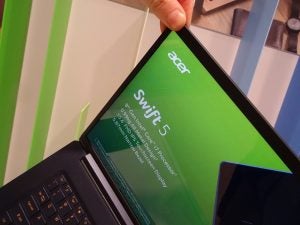 The 14-inch Acer Swift 5 (SF514-53T) was originally due to go on sale in September, but we’re now not expecting to see this until later in the year, if not early next year. The 15-inch Acer Swift 5 (SF515-51T) is, as far a we know, due to hit shelves in EMEA countries in November, while potential buyers in North America will have to wait until January 2019. 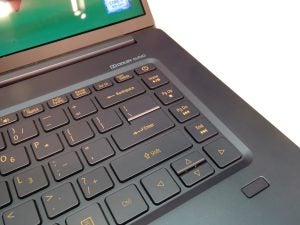 This is a really impressive feat of design and engineering. It’s hard to put into words how light the Acer Swift 5 is. It’s so effortless to pick up, if someone told you it was made of paper, you’d be forgiven for believing them. I can see people who need to work on the move flocking to this.

Looking at those battery numbers makes me think that maybe I’d personally prefer the more compact Swift 3, which promises a meatier 12 hours of power. I’d also be keen to see how the Acer Swift 5 benchmarks against laptops in a similar price range. If we’re talking about something that’s going to start at prices north of £800, it’s going to have to be decent.

I’m personally not fussed if my work devices are a bit on the heavier side, so I’d probably go for something with a bit more meat on the bones than this (on the basis that more ports, a bigger drive etc accounted for that extra weight), but if the Swift 5 can offer great performance and a lightweight build, then this could be something really special.