This is the ZyXEL’s flagship 802.11ac wireless router and the Taiwanese company’s latest attempt to burst into the premium router space. ZyXEL has been in the networking business for nearly 25 years and its pragmatic routers don’t always get the attention of they deserve.

The NBG6716 is an attempt to change that with a radical styling diversion from its predecessors (and ZyXEL’s only previous wireless AC router, the NBG6503). The company is also pushing the NBG6716’s eco-friendly and media prioritisation capabilities to further ingratiate it with power users. 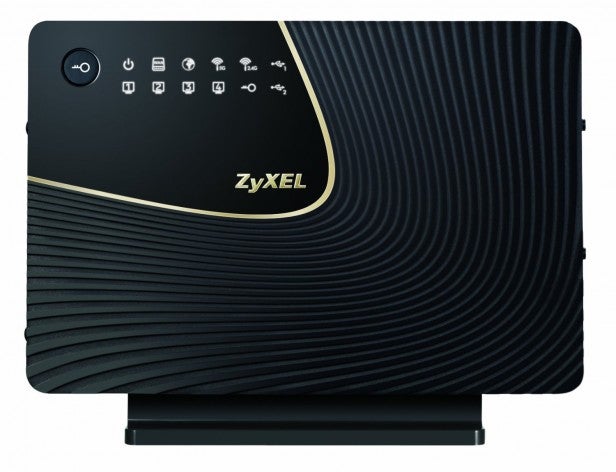 As mentioned, the ZyXEL NBG6716 marks a radical design shift from ZyXEL, but it is welcome. Apart from its direct predecessor, the NBG5715, this is the only router from the company to sit upright – an increasing trend amongst high-end wireless routers. Happily it can still be wall mounted.

At 214 x 74 x 16mm and 458g, the ZyXEL NBG6716 is significantly smaller than wireless ac headliners like the Asus AC68U and Netgear D6300 / R6300. This will be welcome to those who prefer their routers to fade into the background.

That said we’re in two minds about ZyXEL’s choices of finish. The sweeping gold accent seems a little tacky, as does the gold logo (normally it is white). While we didn’t have the NBG6716 long enough to see it gather dust we are also wary about its grooved front finish, which could become a pain to clean.

Elsewhere things are better. Buttons on each side let you disable the Wi-Fi, switch off the lights and safely eject USB devices. The front LEDs are also look great in white, choosing to light up the symbol for each function rather than the usual approach of blinking lights underneath printed symbols. We like it and it makes up for an otherwise inconsistent design. 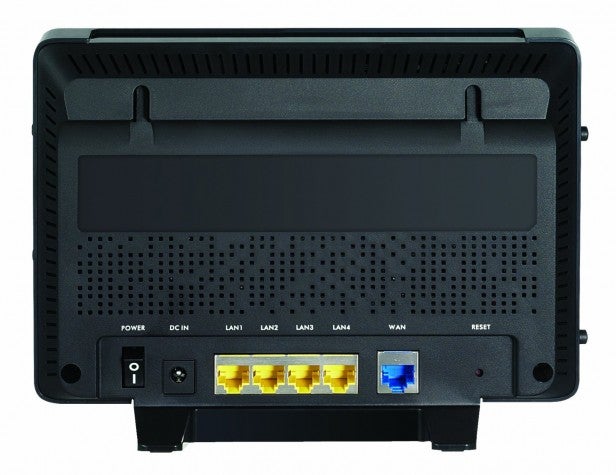 While the NBG6716’s design does a decent job of standing out from the pack, its feature set makes for more familiar reading. The key aspect is a full fat 3×3 antenna arrangement for combined 1,750Mbit theoretical performance (1,300Mbit 802.11ac; 450Mbit 802.11n). In addition to this you’ll find 4x Gigabit Ethernet, 2x USB 2.0 ports (though no USB 3.0) and support for DNLA, UPnP, Dynamic DNS and WPS and WPA/WPA2 security standards.

A nice differentiator is ZyXEL’s environmentally conscious nature with options to schedule power saving modes and automatically switch it on and off. The company also makes a song and dance about its media prioritisation technology, but this is standard in most wireless ac routers these days.

Where the ZyXEL NBG6716 does skimp, however, is its app support. Most router makers offer Android and iOS apps for streaming media and accessing settings (at least locally). ZyXEL does have a ‘zMedia’ app, but it hasn’t been updated since late 2011. It doesn’t officially support the ZyXEL NBG6716 and we couldn’t get it to work. 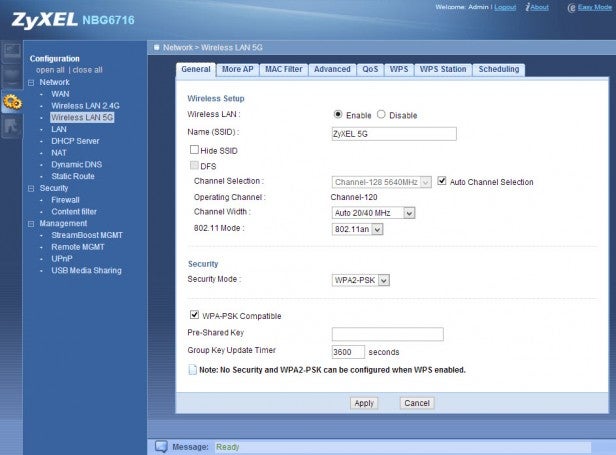 Setting up the ZyXEL NBG6716 is also a mixed bag. ZyXEL supplies the router with a setup CD (increasingly an old school option) but you don’t need it to get going. Instead, it is a simple matter of connecting the router to your modem, booting it and hitting the WPS button to connect wirelessly.

ZyXEL doesn’t get off that easily, though. Those without WPS support will find themselves typing in a needlessly complex default Wi-Fi password and once into the settings the UI is both simplistic in basic mode and a text fest in advanced. Experienced users won’t get lost, but it will certainly put off beginners.