This bijou wireless speaker forms part of Yamaha’s MusicCast multiroom system. With built-in Wi-Fi, you can stream music from phones, PCs, NAS drives and any of the music services available through Yamaha’s MusicCast smartphone app.

As the smallest of Yamaha’s MusicCast speakers, the WX-030 lets you add network functionality to parts of the home where space is tight, such as kitchens or small bedrooms. 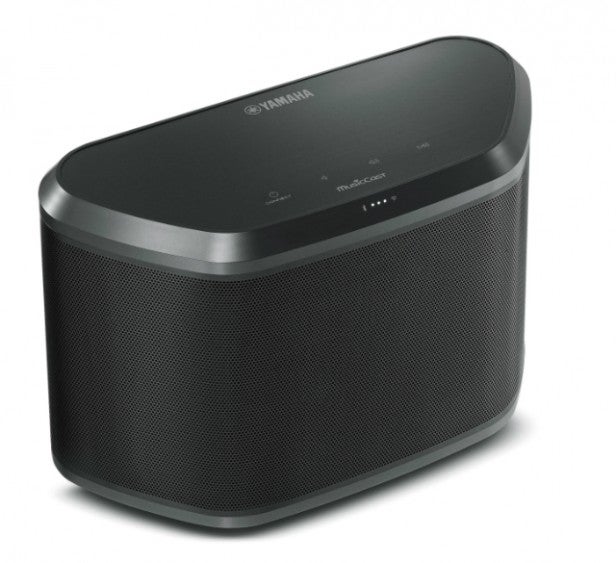 The WX-030 isn’t a particularly glamorous speaker – it’s a far cry from the lifestyle-led approach of the ISX-80 – but its clean, neutral black styling should work well in any room (it’s also available in a jazzier white finish).

It’s the epitome of compact, measuring 243mm wide by 156mm high, but it’s surprisingly heavy and robust. It’s perfect for placement on a bedside table or kitchen worktop, but you can also mount it on the wall using the three keyhole fixings on the rear of the device. 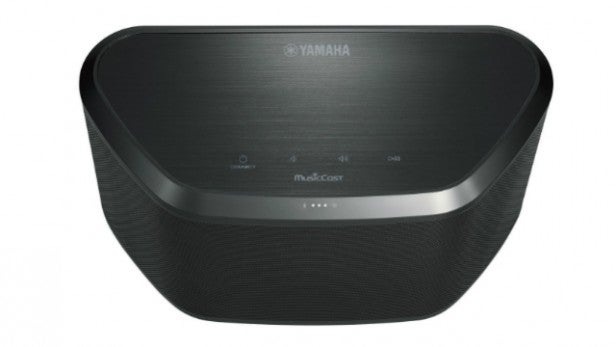 The three-sided front section is covered in sturdy aluminium mesh that curves elegantly at the sides, while the flat top panel is populated by discreet touch-sensitive controls – power/connect, volume and play/pause. The angled ridge on top sports a row of three tiny lights that indicate the Bluetooth, power and Wi-Fi status.

You won’t find any sockets on the back, apart from an Ethernet port for those who prefer a more reliable wired network connection.

It may be small but the WX-030 boasts the same generous feature list as its bigger MusicCast brothers. It’s compatible with MusicCast, which means you can stream music to it using Yamaha’s dedicated smartphone app. The same songs can be played on all speakers in the system, or you can stream different sources to each speaker. 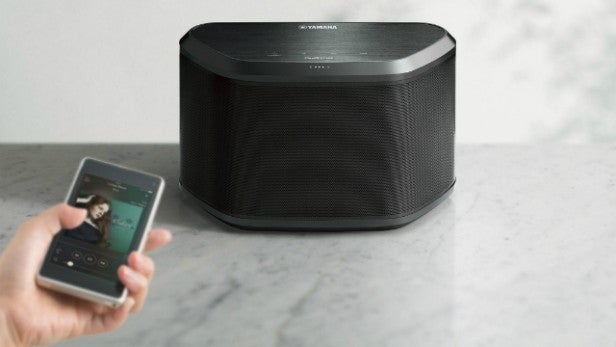 The Yamaha will play music from PCs, NAS drives and other devices on your home network, as well as Napster, Spotify, Juke and internet radio. It’s a decent selection, but users of Deezer, Qobuz or Tidal might be disappointed. The unit also supports Apple AirPlay and Bluetooth, which means pretty much any phone or tablet is catered for.

Another nifty feature is the ability to use two WX-030s as left and right channels in a stereo pair, giving you a wider musical soundstage. However, it isn’t compatible with AirPlay and setup is trickier than it probably should be, involving lots of button pressing on the unit – plus the instructions are only found in a supplementary leaflet on Yamaha’s website, not the main manual. It’s the sort of thing that should be carried out in the app.

The WX-030 is a mono speaker with a quoted power output of 30W. It packs a 40mm tweeter and a 90mm mid/bass driver into that compact enclosure, with a large passive radiator giving bass a helping hand.

The WX-030’s compact size allows you to place it pretty much anywhere, provided there’s a plug socket nearby. Just plonk it down and plug it in.

Connecting the WX-030 to your network is also remarkably easy – just fire up the MusicCast app on your phone and follow the instructions. You have to hold down the “Connect” button on top of the unit and wait for the app to find your device, but it doesn’t take long.

Once it’s on your network, the WX-030 should start appearing in the list of available devices in AirPlay or Spotify Connect. You can also start streaming music from phones, NAS drives, PCs and internet radio using the MusicCast app.

Unlike the ISX-80, the WX-030 doesn’t come with a remote, which means everything is controlled using the MusicCast smartphone app.

Yamaha’s MusicCast app takes a simple approach with its black backgrounds and simple white text. It may not be as eye-catching as rival apps but it’s no less intuitive. 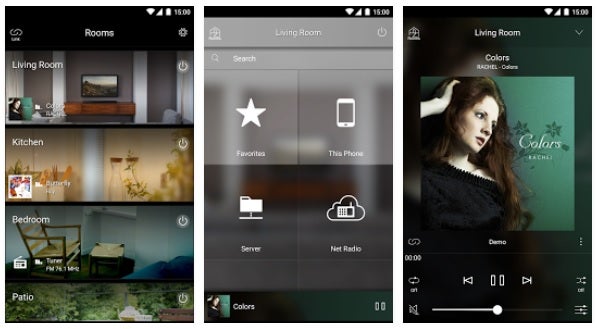 The Rooms menu lists all your connected speakers. They’re displayed with the name and cover art of the current track. You can change the speaker names to make them easier to identify.

The WX-030 works well as a single wireless speaker, streaming music via the app with no fuss, but it’s equally cooperative when used as part of a multiroom system. I tried it out with another speaker from the MusicCast range, the Restio ISX-80, and the two work seamlessly together.

To play the same music through both, tap the Link icon at the top of the screen, select the “master” speaker, and choose which speakers you want to link from the dropdown menu. It’s remarkably easy.

On the source selection screen, inputs are displayed in a grid of large tiles. A Favourites section lets you save up to 40 songs or 30 FM radio presets. There’s a search tool, but this looks for songs only on the phone itself, not external libraries.

I tapped the Server option and delved into my NAS drive. The black-and-white lists are basic but easy to navigate. Most impressively, the app scrolls through lengthy lists of tracks and albums quickly, unlike some rival apps that freeze after each swipe. Scroll too fast and it takes a few seconds to load the titles, but it’s an acceptable delay.

The Now Playing screen provides a volume slider and various controls at the bottom of the screen. From here you can group speakers, save favourites, share songs to social media and adjust the EQ. Just one minor gripe – to scan through a song you have to hold down the track skip key, since there’s no time slider.

Despite its compact size and limited driver arrangement, the WX-030 delivers a very enjoyable performance. Its sound is loud and lively, offering good treble clarity and more bass than expected. You can happily let it play during a dinner party and its smooth, well-balanced sound will provide an impressive backdrop.

Play “Good Intentions” by Ed Motta and the WX-030 attacks the snares and rimshots vigorously while lending a crisp, floating quality to the hi-hats and cymbals. It doesn’t over-stress the treble as some compact speakers are prone to do, which means the top-end doesn’t become too overbearing or hissy when you push up the volume. 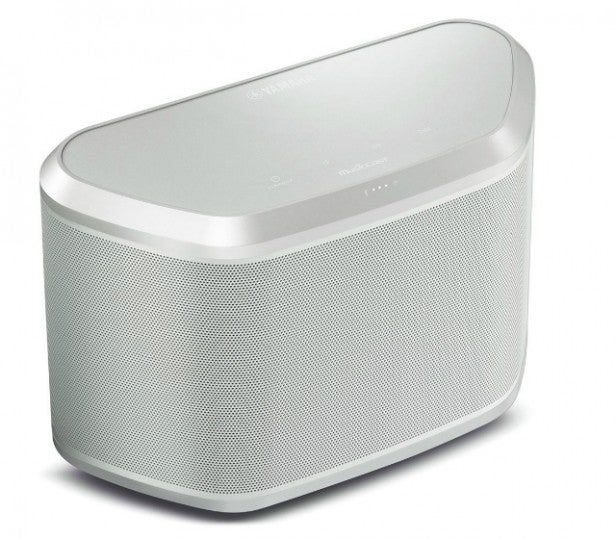 The piano solo that kicks in at 2.23 is suitably sprightly, each key press topped by a glassy twinkle. Rhodes chords have warmth and colour, while Motta’s clearly projected voice soars over the music with all its detail and dynamics intact. It’s underpinned by a solid, agile bassline, driven home on the beat by taut, firm kick-drums. The passive radiator does a good job of bolstering the bottom end.

It doesn’t have quite enough puff in its lungs to fill a large living room, but it has a jolly good go. Bass tails off significantly as you move away from the unit, but you still get a decent sense of depth and punch from the other side of the room. 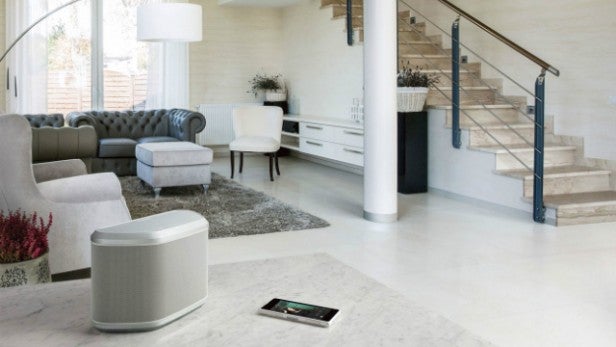 Weirdly, the WX-030 is a much more satisfying listen than the more larger and more expensive ISX-80. The overall sound is more solid and cohesive, with greater drive and solidity when tackling up-tempo dance tracks. I didn’t have a second WX-030 to hand, but the quality of the mono presentation suggests that pairing two in a stereo configuration could be worth the effort.

There are a few drawbacks, however. The sound becomes a little congested with particularly busy productions, losing many of the finer details of the recording, and the stage is understandably narrow given the limited scope of the drivers. It also loses composure fairly quickly when you push up the volume high – bass loosens up and the mid-range hardens. None of this is a disaster, but it serves to remind you that this isn’t a hi-fi experience.

On the whole, the Yamaha’s performance is hugely enjoyable and compares favourably with other similarly priced wireless speakers such as the Samsung R1 and Denon Heos 1. 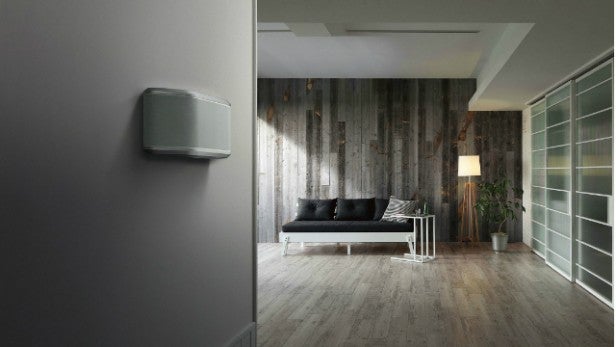 The WX-030 is an ideal way of expanding your audio system into rooms where a bigger speaker is impractical. If you’re already a MusicCast convert then the WX-030 is a no-brainer, but anyone looking for a great-sounding compact standalone speaker will be equally happy.

This terrific little unit delivers a surprisingly loud and lively sound with crisp treble and punchy bass – an impressive feat given the unit’s compact design. The narrow mono output and dislike of loud volumes are drawbacks of course, but its engaging, well-balanced presentation more than makes up for it.

What’s more, it’s easy to use and works seamlessly alongside other MusicCast speakers thanks to Yamaha’s excellent smartphone app, which offers a wide range of music sources.

Its performance is far from perfect but the WX-030 is an impressive member of the MusicCast range, offering a big sound in small rooms.