What is the Denon Heos 1?

Heos 1 is the entry-level model in Denon’s family of wireless multiroom speakers, sitting below the top-end Heos 7 (£499), Heos 5 (£349) and Heos 3 (£249). This compact, unobtrusive speaker can be placed anywhere in the house, including the bathroom thanks to its humidity-resistant enclosure.

What makes Heos 1 special is that you can make it completely portable by adding the optional Go Pack. This is available for £79, or £40 if you buy it with the Heos 1 from some online retailers. It offers six hours of battery life, Bluetooth functionality and a splash-proof cover for the rear sockets, which is ideal for outdoor parties when summer rolls around. 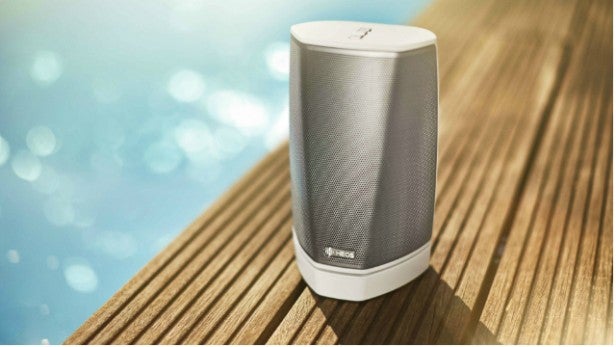 Heos 1 isn’t the prettiest wireless speaker I’ve clapped eyes on, but that’s probably because its firm, robust enclosure has been fashioned to withstand the rigours of day-to-day portable use – not to win beauty pageants.

The 189mm-high hexagonal enclosure is styled in a tasteful black and grey matte finish, with a heavy-duty metal grille fixed to the front. It’s also available in white if you prefer. Build quality is superb and perfectly commensurate with the asking price, feeling like a product that’ll be with you for years to come.

When attached, the battery pack takes the height to 222mm and adds 320g of weight, which doesn’t hinder your ability to cart it from room to room.

Denon has kept clutter to a minimum. A subtle light on the front glows blue, orange or green and blinks when booting up. On top you’ll find three sturdy buttons for volume and mute but no playback or input-selection keys, which means you have to delve into Denon’s Heos smartphone app just to pause a track or change inputs.

On the rear of the speaker is an Ethernet port, a 3.5mm mini-jack input and a USB port, which not only lets you play music directly from portable devices but also houses the Go Pack Bluetooth adapter. This tiny dongle sits in a rubber plug that covers the rear sockets, making it safe to use in the bathroom or kitchen. The recess also houses a Wi-Fi setup button labelled “Connect” and tiny light that aids Wi-Fi setup.

The battery pack clamps tightly to the bottom using a simple twisting mechanism. To charge it, connect it to the speaker and plug in the power lead – Denon says you’ll get six hours of playback time from a full charge. A row of four blue lights on the back of the battery tells you how much juice is left.

The Heos 1 comes with built-in dual-band Wi-Fi, but the lack of Bluetooth out the box is disappointing. Paying £79 for a feature that most rivals offer as standard feels wrong. But it’s definitely worth stumping up for the Go Pack: the ability to make the Heos 1 portable and splash-resistant is a killer feature, something that isn’t offered by any multiroom speaker rivals.

There’s a generous array of online-streaming services, including Spotify, Deezer, Napster, SoundCloud, Tidal, TuneIn and Rdio. That’s most of the main services covered. 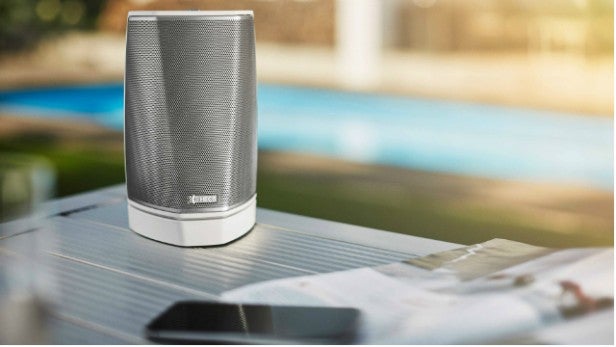 You can also stream music stored locally on the phone or from servers on your home network. It plays MP3, WMA, AAC, FLAC and WAV. Disappointingly, there’s no support for hi-res files – only 32kHz, 44.1kHz and 48kHz sampling rates are supported. This may encourage audiophiles to look elsewhere.

Multiroom functionality allows you to send music to Heos speakers dotted around the house, or use two Heos 1s as a stereo pair. You can play different sources on different speakers (Spotify on one and Tidal on another, for example) and it’s all orchestrated by Denon’s Heos app for Android and iOS, which I’ll discuss later.

Setup is quick and easy. Once you’ve pulled the unit out the box, there’s very little to do other than plug in the power lead or attach the Go Pack. It works through your existing Wi-Fi router, so you don’t need a hub or bridging device.

To connect Heos 1 to your Wi-Fi router, download the Heos smartphone app and follow the on-screen instructions. It’s a simple process, with eye-catching graphics that get the point across and inform you when to press the Connect button on the back. 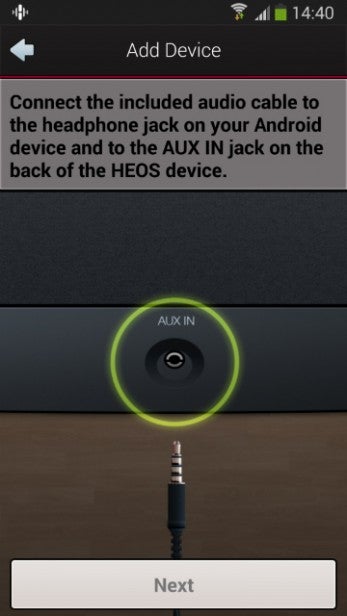 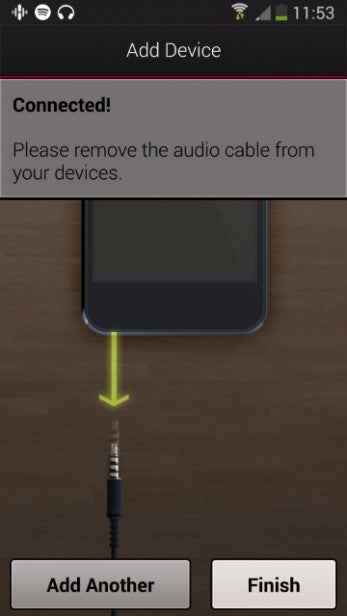 During the process you have to run a 3.5mm audio cable between your phone and the speaker, which is how it passes on the Wi-Fi data. It’s something I haven’t encountered before, and seems a somewhat clunky solution for such a cutting-edge product – other wireless speakers manage fine without it.

There were a couple of false-starts during installation, but by and large the setup process is hassle-free. Adding a new Heos speaker to the system is simple – just hit the “Add Device” option in the setup menu and run through the instructions as before. Denon sent two Heos 1s for the test and I had the second one up and running in minutes.

And after connecting the Go Pack Bluetooth adapter to one of the speakers, I also had no trouble streaming music. Just hold down the Connect button on the back, pair your device and start playing. You can even send Bluetooth music to multiple grouped speakers using the Heos app.

Just a couple of niggles to report. First, you can control Bluetooth playback only from the device itself, not through the Heos app (the transport buttons are blacked out as above). Second: when you skip tracks the Heos 1 takes a few seconds to react.

Denon has done a terrific job with the Heos app – the layout is clean and uncluttered, with logical descriptions and punchy graphics. It revolves around three tabs at the bottom of the screen – Rooms, Music and Now Playing.

The Rooms tab shows you all connected Heos speakers, allowing you to create a group by dragging and dropping the tiles onto each other. You can play music in stereo through two grouped speakers by tapping the pencil icon and selecting the relevant option in the menu. Adjust the master volume and both lights flash in unison to confirm that they’re grouped. 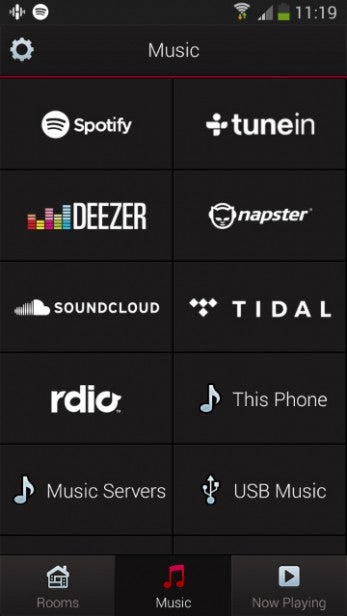 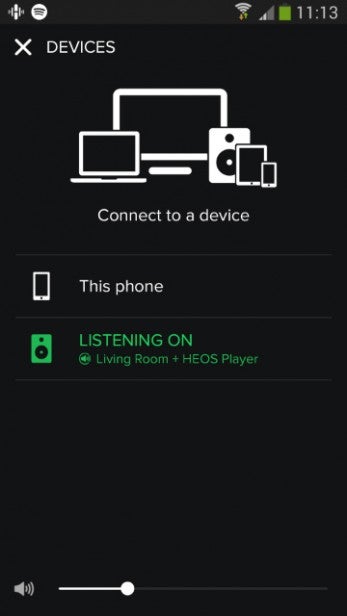 The Music tab displays all available streaming services, identified by their familiar logos. Towards the bottom of the page you’ll find other sources, the buttons for which are given sensible names such as “This Phone” and “Music Servers”. You can also access playlists, favourites, history and inputs. It’s all so straightforward I pretty much mastered it on my first go.

The Now Playing screen packs in all the info you need, such as track name, album and cover art, accompanied by transport controls, volume and track sliders.

The app did a couple of odd things, however. When I first started playing music, the playback queue was populated by a bunch of random tracks from various streaming sites (above right), which I had to delete manually. The app saves every track you play in a playlist, which can become confusing, but you can clear it quickly using the “Play Now & Replace” option when selecting a track.

You might look at the Heos 1’s size and spec and wonder why such a small speaker costs the best part of £200. Start playing some music and it all makes sense.

Played through a single Heos 1, its sound boasts a pleasing balance of power and refinement. It’s able to dig out the big, beefy bass notes of a tune while handling mids and highs with a smooth, silky touch. It’s a rewarding listen, sounding much bigger and authoritative than its dimensions suggest. 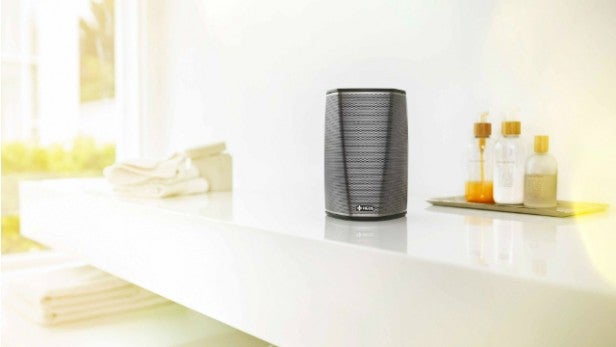 Play “Blow Your Mind” by Jamiroquai via Bluetooth and the kick drums are full and heavy, fusing tightly with the warm funk bassline. Meanwhile, hi-hats sizzle, snares slap and Jay Kay’s natural-sounding voice really soars. I couldn’t help but nod my head and sing along.

I’m impressed by the amount of bass produced by this compact unit and how cohesively it all hangs together. The mid-range is warm and full-bodied, resulting in a more engaging experience than the Sony SRS-X88, for example. It can sound a little thick with particularly bass-heavy tunes, which can become overpowering when you crank up the volume, but if so it’s worth tinkering with the Heos app’s tone controls.

Switch to subtler jazz material and the Denon continues to impress. Miles Davis’ “Blue In Green” streamed from Spotify sounds beautiful thanks to the rich piano chords and the lack of shrillness in Davis’ trumpet work. There’s detail aplenty, from the shuffling brush drums to John Coltrane’s breath as he drops science on the saxophone.

Step up to stereo and things get even better, with a more immersive soundstage and better sense of imaging.
The Denon’s detailed, full-bodied presentation comes closer to the hi-fi experience than I expected from portable speakers. Sure it isn’t in the same league as the more expensive Naim Mu-So or Geneva AeroSphère, but for its price and size the Heos 1 offers a terrific performance. 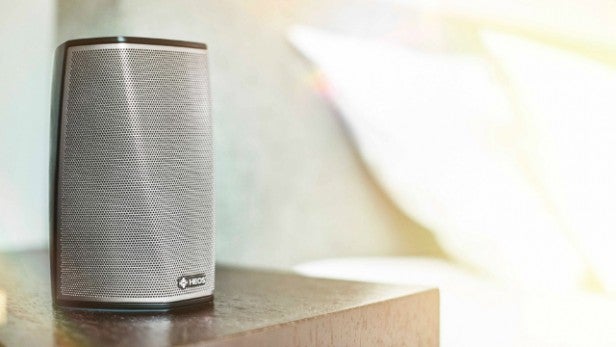 Should I buy the Denon Heos 1?

With myriad multiroom speaker systems on the market, your choice is becoming increasingly difficult – but Denon puts forward a convincing case with the Heos 1. It delivers a big, powerful sound from a small enclosure, with plenty of detail and dynamism in the music.

It’s also easy to set up and use with Denon’s Heos app, which provides seamless control over the multiroom system. But Heos 1 really comes into its own when you add the optional Go Pack battery and Bluetooth adapter, which makes it fully portable – a rarity among multiroom speakers. It really is worth the extra cash.

Sadly, a few drawbacks deny Heos 1 top marks. There’s no hi-res audio support, the lack of Bluetooth as standard sticks in the craw and a few niggles need ironing out. But otherwise, Heos 1 is an impressive product and worth investigating if you’re after a truly portable multiroom speaker.

The lack of Bluetooth out the box and hi-res support is a shame, but Heos 1 delivers impressive sound quality for such a small speaker, while the portable, splash-proof Go Pack is a killer upgrade.