What is the Samsung R1?

The R1 is the smallest and most affordable of Samsung’s new multiroom speakers, sitting below the R3, R5 and R7
in the range. It may be the cheapest of the new models, but Samsung
hasn’t skimped on features – it does all the same tricks as the more
expensive speakers but from a more compact enclosure. Aside from
multiroom functionality, the R1’s key feature is its omnidirectional
speaker tech, which delivers the same sound quality from anywhere in the
room.

The
R1 is a scaled-down version of the R5, measuring around 8cm shorter.
Its smaller size, upright enclosure and small footprint make it even
easier to place on desktops and furniture. The speaker itself is shaped
like a cylinder that flares at the top, with a gap between the base and
speaker that disperses sound from the woofer. 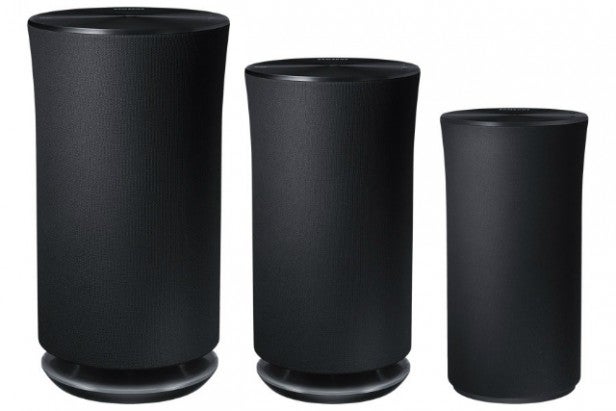 The minimal black finish lacks the glitz of the egg-shaped R7,
but it’s a memorable look. Build quality is excellent – the speaker
feels weighty in the hand and it’s solidly pieced together, plus the
black cloth wrapped around the edge is a classy touch.

The
pièce de résistance is the UV-coated top panel, the entire surface of
which is a touch-sensitive control pad. Swipe your finger to the left or
right and it skips back or forward a track, while a single tap pauses
playback. The R1 eschews the OLED display on the R5 for a basic LED in
the middle that blinks when it detects activity.

On
the outskirts of the panel are volume and Mode controls, also of the
touch-sensitive variety. The Mode button toggles through the inputs –
Bluetooth, TV SoundConnect and Wi-Fi. A female voice lets you know when
various inputs are “ready”. A long press on the panel puts the speaker
into standby, but it will shut down automatically after 15 minutes of
inactivity.

A recess beneath houses the power inlet, a micro-USB
for service use and a button that helps you connect the speaker to a
network. There’s no 3.5mm mini-jack for external sources – this is a
strictly wireless affair. A hole in the bottom edge keeps the power lead
nice and tidy.

The feature list is
the same as the R5 apart from the drivers – it uses a 3.6-inch woofer at
the bottom as opposed to the R5’s 5-inch driver, but the 1-inch tweeter
at the top remains the same. These drivers each disperse sound through
an Acoustic Lens, spreading the waves evenly in all directions. Samsung
calls this Ring Radiator technology.

Most people walk around
doing other things while listening to music, so the aim of this
technology is to deliver the same sound quality no matter where you are
in the room, eliminating the so-called “sweet spot”.

The
R1 also boasts dual-band Wi-Fi and Bluetooth 4.0. If you have several
Samsung speakers around the house you can create a multiroom system,
conducted by the Multiroom App 2.0. The app is now available for the
Samsung Gear S and Apple Watch, allowing you to access the song queue
list and speaker list, or control playback and volume.

Using the
app you can stream music from your smartphone, DLNA devices and a
generous array of online services, including Spotify, Deezer, Murfie,
Napster, Qobuz, 7digital, 8tracks, TuneIn and Rdio. The lack of Tidal is
a shame and there’s no SoundCloud either, which I’ve seen on other
multiroom systems. 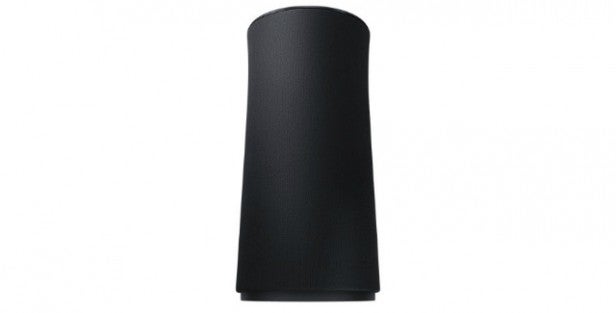 The
R1 plays hi-res audio, including FLAC, ALAC, AIFF and WAV files up to
192kHz/24-bit. Of course, you can also play lossy formats such as MP3,
WMA, AAC and OGG. Finally, TV SoundConnect beams sound from a compatible
Samsung TV to the speaker.

The first thing you need
to do is download the Multiroom App 2.0 onto your smartphone. Select the
“Add Speaker” option in the setup menu and the app searches for
available speakers. Once discovered, key in your Wi-Fi password and it
joins the R1 to your network. A female voice tells you that the
connection is complete.

Samsung’s
smartphone app is easy on the eye and even easier on the fingers. The
layout is simple and streamlined in a way Samsung’s previous multiroom
app never was, allowing you to dip in and out of various music sources
with consummate ease. Yes the sophisticated colour schemes and jazzy
backgrounds are pretty, but they don’t get in the way of usability. 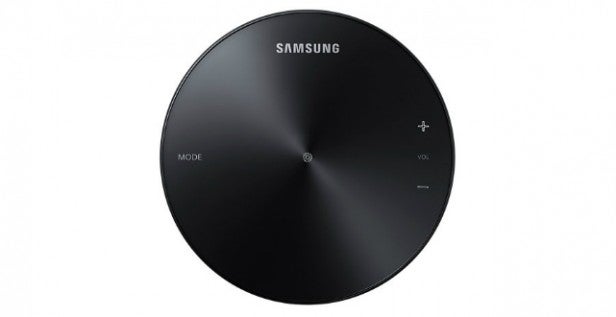 Everything
can be accessed from the app’s first screen. Tap the Music Source
banner at the top and a dropdown menu displays a list of music services
and available DLNA devices.

You
can browse songs using a sidebar on the right, or edit the playback
queue by tapping the track name. At the bottom of the screen are
playback controls and a volume slider, while the Options menu offers an
equalizer with Pop, Jazz and Classic presets. A virtual jog dial in the
middle of the screen lets you skip tracks simply by dragging your finger
round the edge.

Controlling
a multiroom system is easy. Each speaker in the system is displayed in a
box with individual volume sliders and EQ settings. You can send
different sources to each speaker, or group them together and play the
same thing through them all. To do that, simply drag the boxes on top of
each other.

The first thing to say
about the R1’s performance is how surprisingly powerful it is for such a
slender speaker. It fills the room easily, and thanks to the wonders of
Samsung’s Ring Radiator tech, the sound remains deep and detailed no
matter where you are in relation to the speaker. The R5 is slightly more
potent, but there isn’t much in it.

I placed the R1 at the other
end of the room – a good five or six metres away – and controlled the
music from the smartphone app. Even from that distance I could feel the
rhythms and basslines pulsating, while sparkling hi-hats and tambourines
give the music a wonderful sense of air and space.

Basslines
are deep, fulsome and tightly controlled by the impressive woofer. The
reggae-tinged bassline of “Know Who You Are” by Pharrell Williams
bounces along nimbly without an ounce of fat, making head-nodding
compulsory. Notes start and stop decisively and integrate well with the
kick drums and keyboards. There’s a chance that some listeners might
find the R1’s bass output a little too full-on, but if so, you can
reduce it using the app’s equalizer menu.

Elsewhere, the R1 makes
sense of intricate, multi-layered songs such as “Sleepwalkers” by
Jarrod Lawson, spreading its attention equally between the vocal
harmonies, drums, flutes, piano solos and basslines. There’s plenty
going on, but the R1 separates the elements clearly and offers an even
balance across the frequencies.

It’s an exciting listen too,
thanks to the characteristically crisp treble. Snare drums snap and
guitars have a textured twang, but the R1 stays just the right side of
brightness. Turn up the volume loud, though, and a touch of hardness
creeps in – particularly when playing certain EDM tracks and pop songs
from Spotify. Play “Sax” by Fleur East and the sharp claps and synths
test the limits of the tweeter, but on the whole the R1 copes well for
such a small speaker. 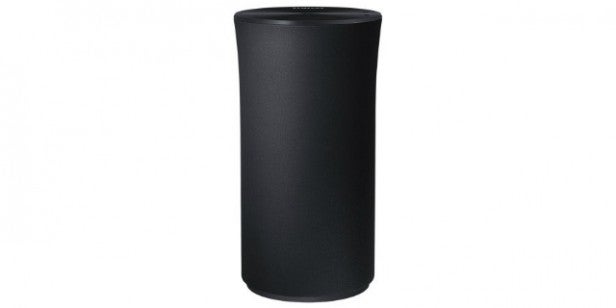 Should I buy the Samsung R1?

The
R1 might be the smallest of Samsung’s new multiroom speakers but it
gives the larger R5 a run for its money. You get the same extensive
feature set and living room-friendly design – but, most impressively, it
delivers more of the same powerful, punchy sound. There are some
sacrifices to be made, but on the whole it does a similar job at a lower
price.

This slender cylinder effortlessly fills the room with
omnidirectional sound, allowing you to walk around without any change in
tone or bass depth, while crisp treble makes for an exciting listen.
Its soundstage is slightly smaller than the R5, and it loses poise at
higher volumes, but it still holds its own sonically against price
rivals such as the Denon Heos 1.

What’s
more, the smart design and small footprint make it a welcome addition
to any room. Plus, thanks to Samsung’s excellent smartphone app, it’s
remarkably easy to control as part of a multiroom system.

Samsung’s
entry-level multiroom speaker is stylish, easy to use and bursting with
features, while clever Ring Radiator tech delivers powerful and
detailed sound wherever you are in the room.