Exceedingly simple to fit, the Yale Linus Smart Door Lock can upgrade most Euro Cylinder doors to be smart. Provided your door meets the specifications, you can retain standard key access from the outside, while also opening your door with your phone or optional keypad. Including support for Apple HomeKit and an optional gateway, it's possible to have remote control of your door, too. A keyfob option for unlocking would be nice, but even without it this is a great smart lock.

Yale has been one of the pioneers of smart locks, although its previous attempts have required the complete removal of your existing lock. Not so with the Yale Linus Smart Lock, which clips over your existing lock to provide old-fashioned key entry when you need it. Simple to install, easy to use and flexible, this could just be the smart lock enocurages you to make the switch.

While Yale has previously gone down the road of having full replacement locks, the Yale Linus Smart Lock is different. Similar to the Nuki Smart Lock, the Linus is designed to sit over your existing lock, turning a key.

The benefits are that you don’t have to modify your door, and that you retain standard key entry from the outside. The latter is of particular importance. Many smart locks, such as the Yale Conexis L1, don’t offer key access on the outside, so if the lock breaks then you have no way to unlock your door. In addition, replacement locks require a spare 9V battery for power should the internal batteries run out of juice, adding further hassle. There’s no doubt in my mind that retaining a traditional lock is the best route all-round.

Although the Yale Linus Smart Lock has been designed to work with doors with Euro Cylinder locks, there are some requirements. First, you need to have a door that has a lock on the inside (not a thumb turn). Second, it should be possible for the lock to be operated from the outside when a key is inserted on the inside.

If your door doesn’t meet these specifications, then Yale sells the Linus Adjustable Cylinder, which replaces your existing locking cylinder. This model has handy extensions in order for it to fit any door width, as well as a lock on the outside. Having to replace the cylinder potentially makes fitting the Linus slightly more difficult, so you may want to get in a professional installer.

For those who are able to meet the requirements so far, the last thing to check is clearance. Measuring 147 x 58 x 52mm, the lock isn’t particularly chunky, but it may not fit if you have a door that opens outwards.

Once all those boxes have been ticked, the Yale Access app takes you through installation. First, there’s a mounting plate that has to be fitted to the back of your door, around the keyhole. Ideally, you’ll have a flat surface of door to which you can attach this. I found that the plate will stick securely to a lift handle on a multi-point lock. 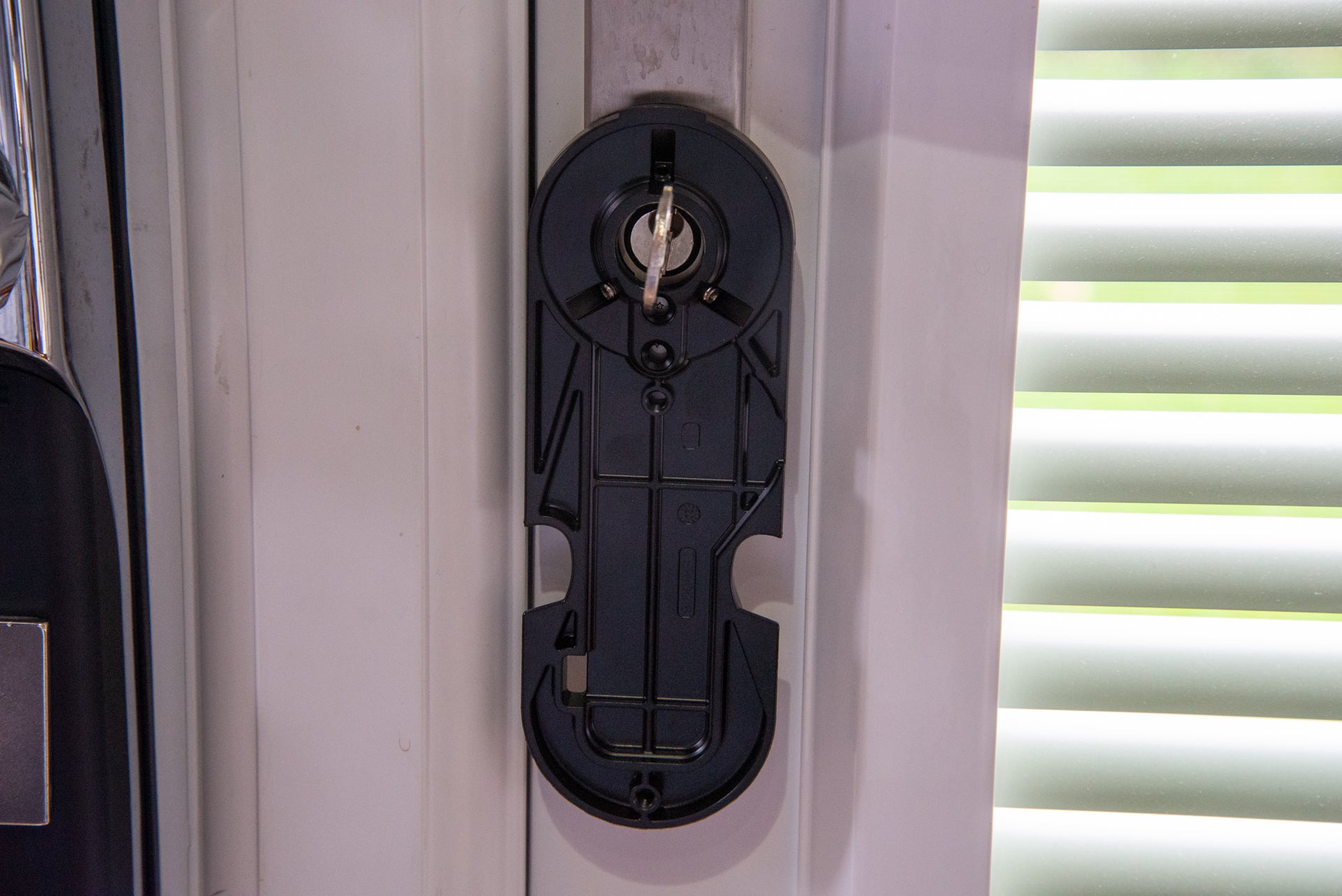 Next, you stick the key in, then push the lock over the top and clip it in with its wings – and you’re done. The lock slides over the key and turns this to lock or unlock. 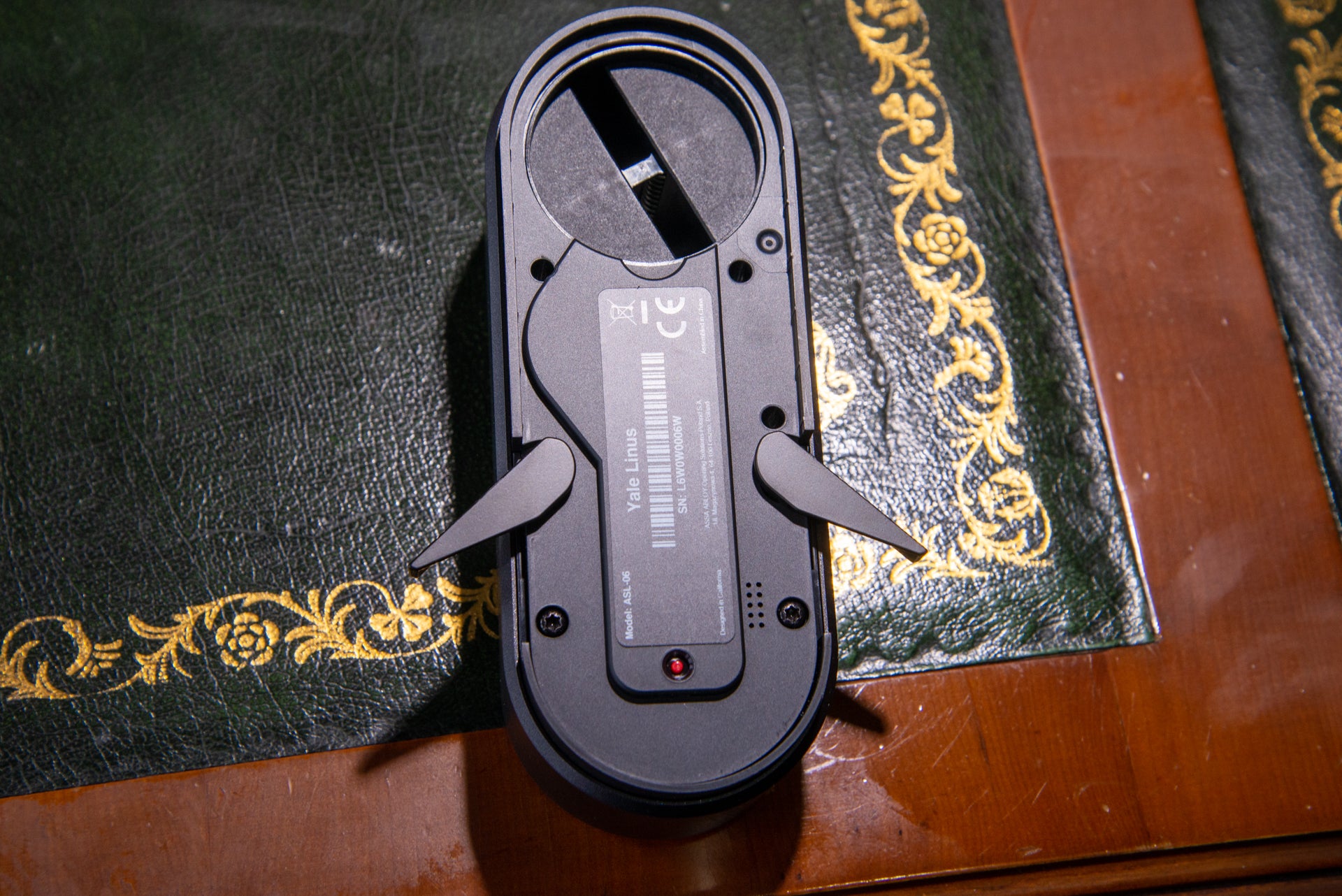 You get a thumb turn on the inside, which is great for safety; you can quickly unlock your door in the event of an emergency, such as a fire.

Four AA batteries slip into the front, and then it’s a simple matter of following the instructions on the Yale app to get the lock connected to your phone via Bluetooth and, if you’re on an Apple device, to HomeKit.

Finally, you’ll be asked if you want to install the DoorSense (a small, flat magnet), which can detect if your door is open or closed. The magnet is fairly powerful, so it doesn’t have to be placed too close to the smart lock. I put my magnet on the opposite door handle, with the Linus able to detect it just fine. 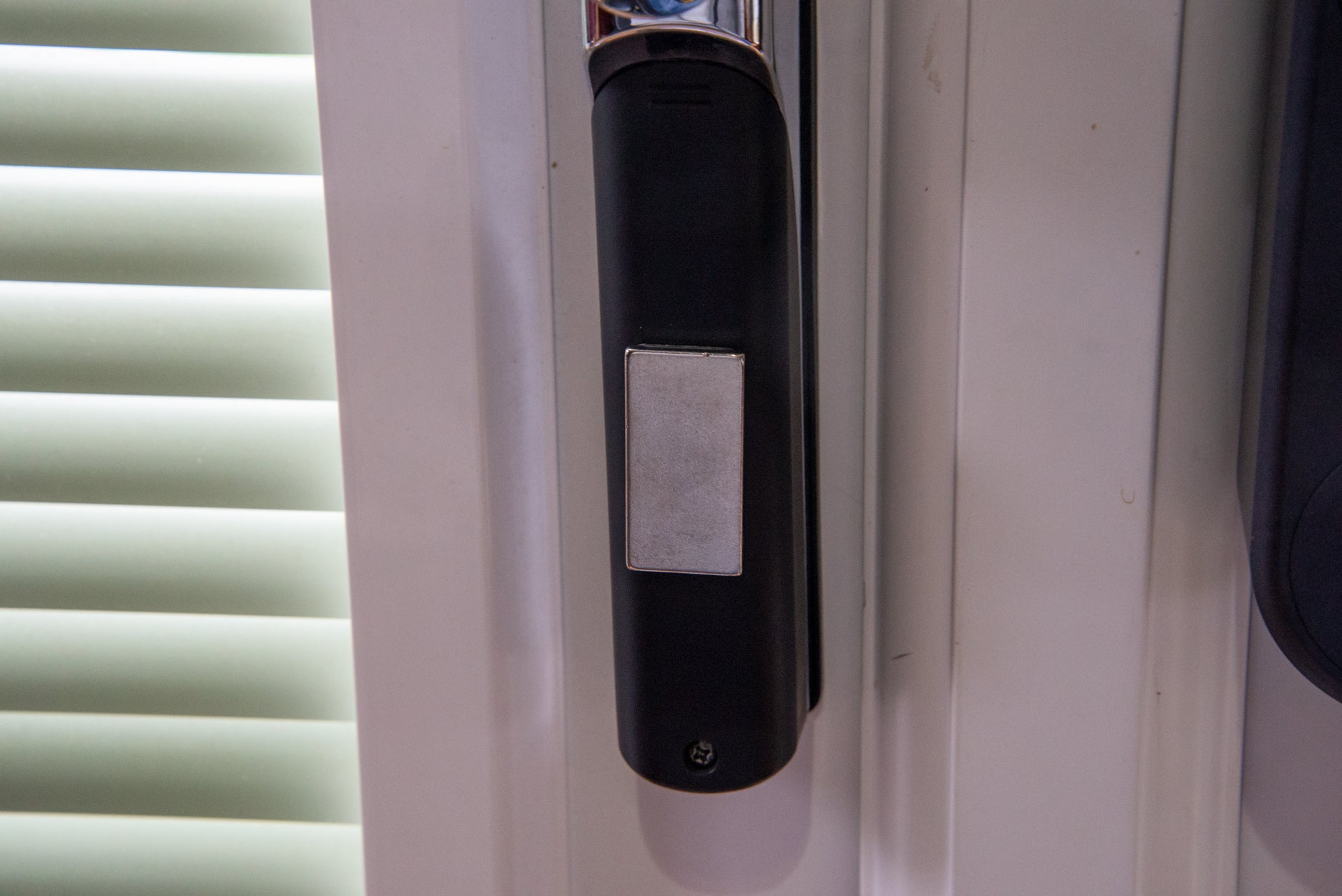 Before you can get started with the lock, there’s some configuration required. First, follow the instructions in the Yale Access app to calibrate the lock. You’ll need to lock and unlock it using the thumb turn, so that the Linus learns the positions for both. Thereafter, you’ll need to calibrate DoorSense, opening your door so it’s fully ajar. 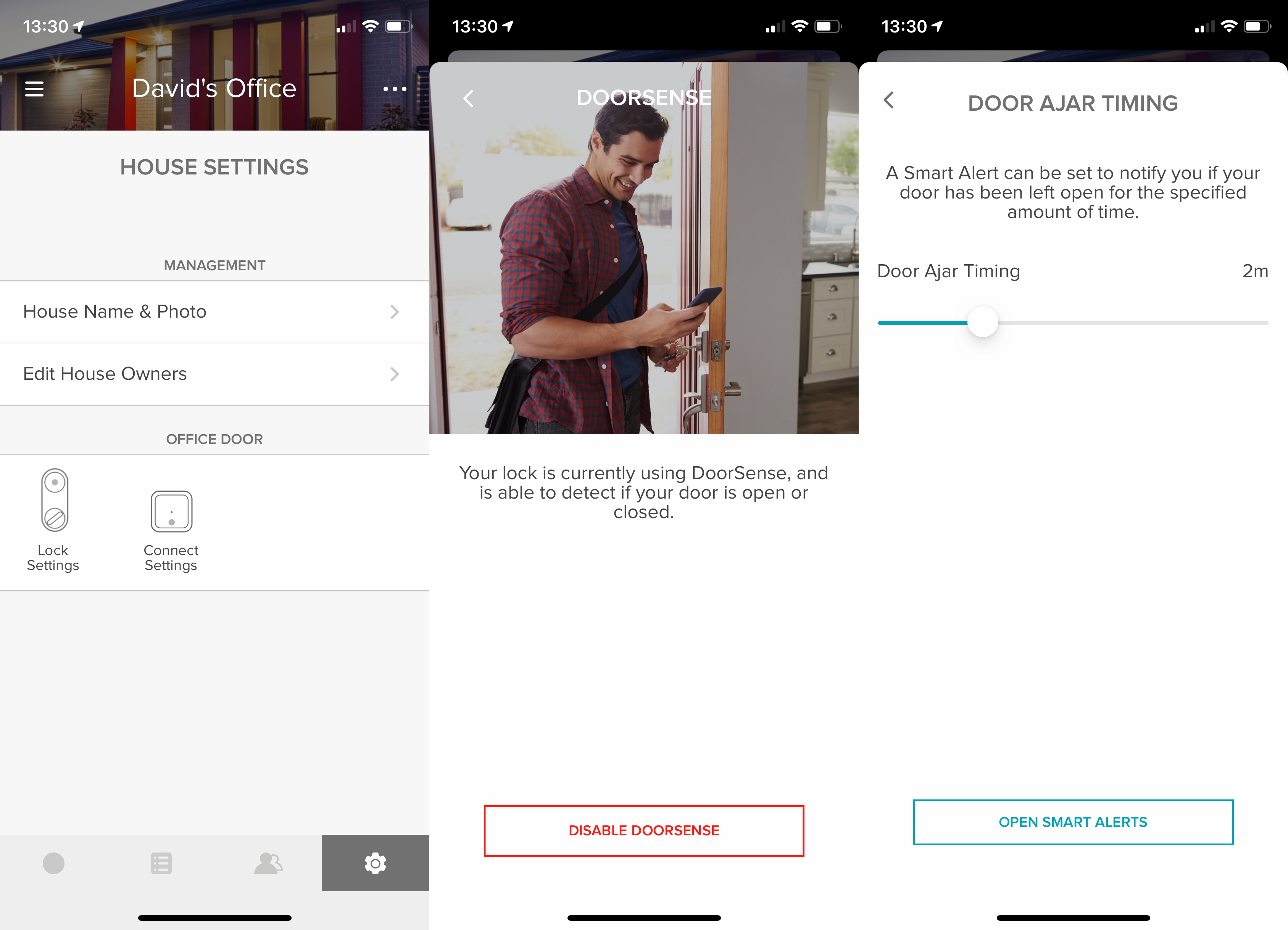 At its simplest, the door can be used via the app. You get a clear indicator that displays whether your door is locked or unlocked, opened or closed. A tap on the icon will lock or unlock your door, which happens quickly, smoothly and quietly. In fact, the Yale Linus is far quieter than the similar Nuki Smart Lock. To grant other people access, you invite them from the app. 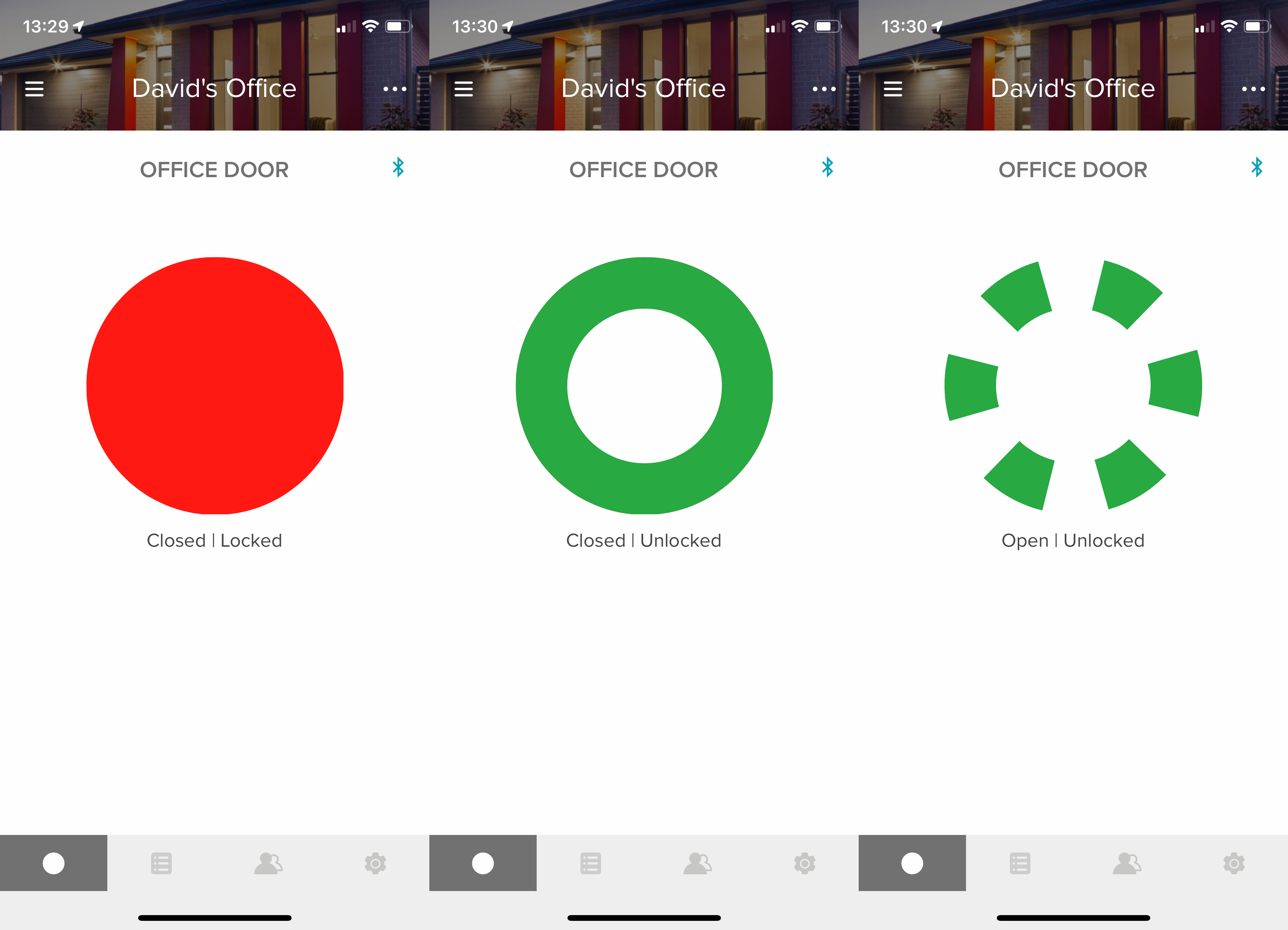 The experience of using a smart lock manually through an app isn’t great. Walking up to the door, pulling out your phone, locating the app, finding the lock and then tapping the button is a faff. There is an app for the Apple Watch, too – although finding it, opening it and using it to unlock your door isn’t much faster. In fact, the only time I ever use a smart lock’s app in this way is when I’ve either forgotten my keys or need to unlock remotely (more on this later).

To get around this issue, there are a few different options. First, the app supports geolocation, so you can have your door unlock once you get within range. To prevent any issues, such your door unlocking when you pop into the garden, the Auto-Unlock feature only turns on when you get more than 200m from your home, unlocking when you’re within a few feet of your lock. 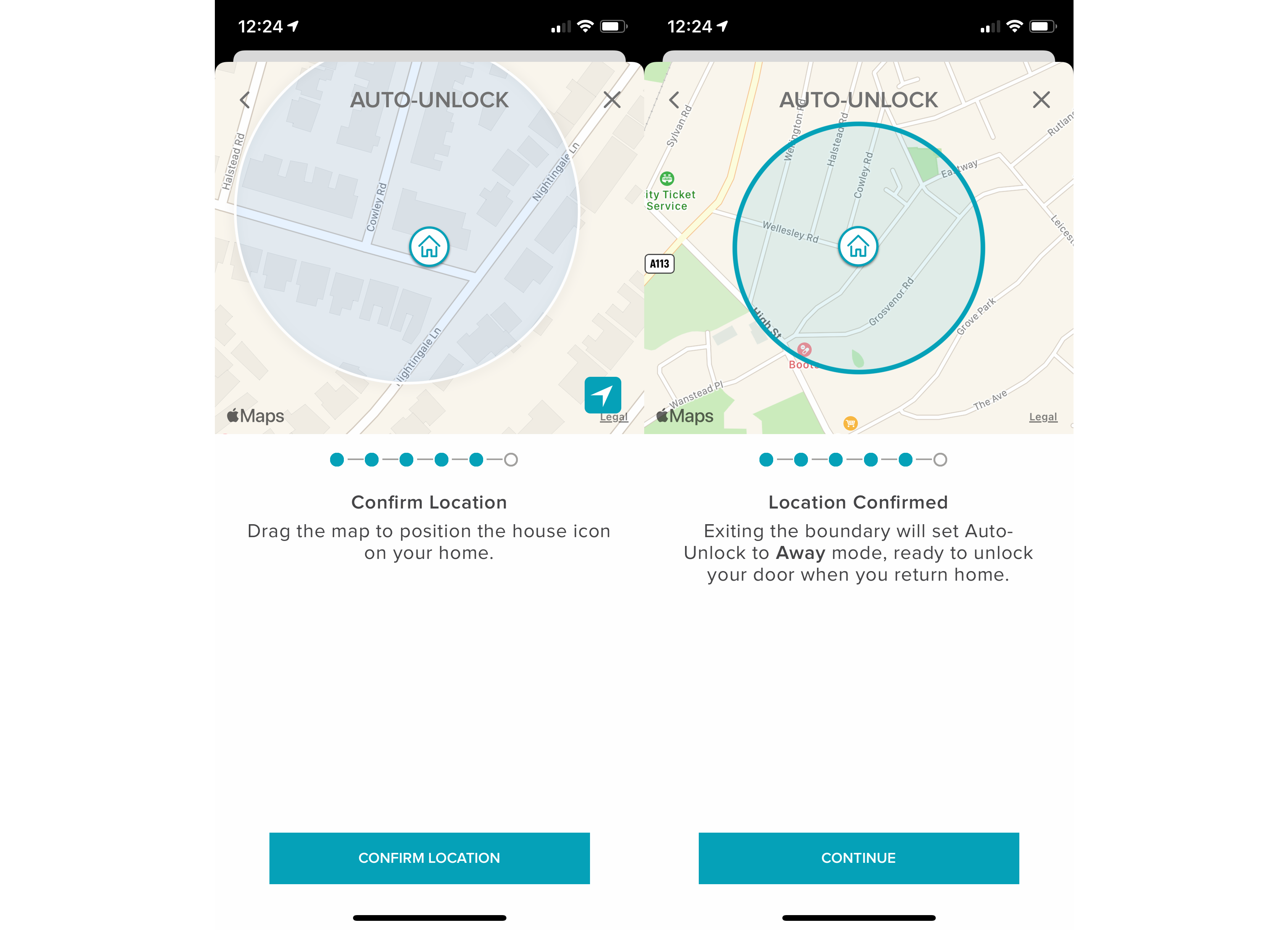 An auto-lock option is available, too, activating the lock when the door is closed; but this is only available if you’ve told the app that your door doesn’t require a handle to be lifted before it’s locked. 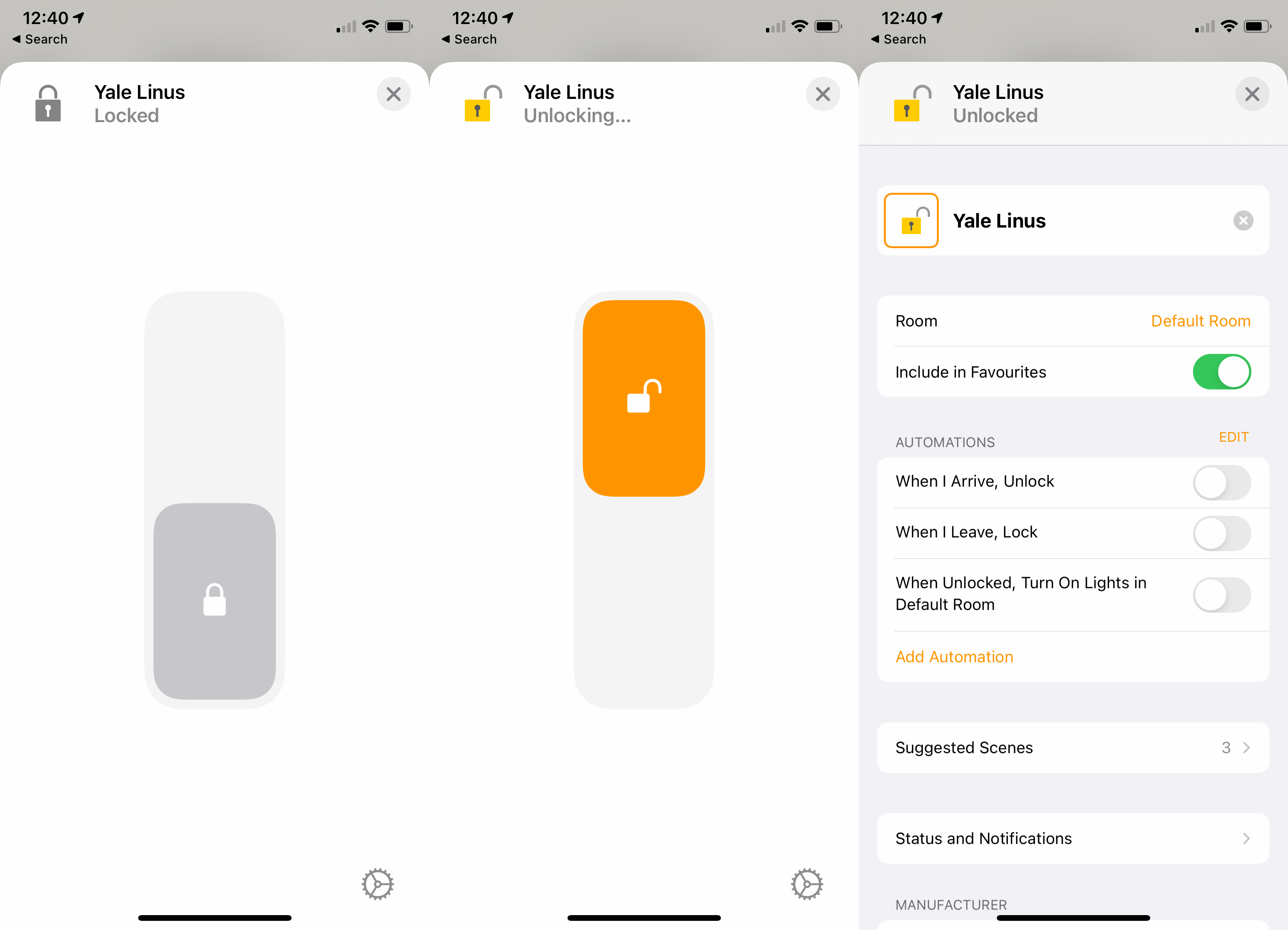 Those with a lift handle will have to manually lock the door, which means opening the app and going through the faff described above. As such, multi-point lock owners will be better off with the Conexis L1, which locks when you lift the handle.

If you prefer manual control, then there’s an optional Linus Smart Keypad (£59.99). This lets you add PINs to the door and provides a button for locking externally. This is also a decent option for those who want the integration with Airbnb for house guests.

It’s a shame that there’s no keyfob available, of the type available with the Nuki Smart Lock; I’d even settle for the RFID tags that accompany Yale’s other locks.

The majority are likely to find this lock will be used with a key from the outside, with the Linus an optional extra that provides access if you’ve lost your keys. Just be aware that the depth of your lock will define how easy this is to achieve. On my door, the cylinder is fairly narrow, so there isn’t enough space to have two keys inserted (one on the outside and one on the inside).

A sharp tap on the outside key pushes the inside one out a little, so you can unlock manually, but then I have to take the Linus lock off and re-sit the key. If using the Linus on an external office as a secondary lock, this isn’t a problem – but it could prove frustrating for some and those who regularly wish to use a physical key may need the Linus Adjustable Cylinder.

Linus can be integrated with HomeKit, with anyone you share your home able to access the lock. This means you can use the lock with Automations, too – say, turning your Tado heating on and your Abode alarm off on returning home.

If you have a HomeKit Hub (HomePod, HomePod Mini, Apple TV or iPad) within Bluetooth range, you also get remote control of your lock, saving you £69.98 on having to buy the Linus Connect Bridge.

However, for those who don’t have an iPhone – or if you want some additional features – the Linus Connect Bridge may well be worth the cash. This small plug needs to be placed within Bluetooth range of your lock and connects to your home network via Wi-Fi.

It provides remote access through the Yale Access app, plus it turns on a bunch of integrations, including IFTTT support. Note that IFTTT support is provided by the August service (Yale owns August).

Should you buy the Yale Linus Smart Door Lock?

The older Yale Conexis L1 is arguably a neater solution for locks where you have to lift the handle, since this locks the door automatically. However, there’s no keyhole on the outside, and you have to add a module – the Z-Wave, for example – for remote access via an alternative system such as SmartThings. Note that there should be a module available for this lock soon that lets you use it with the Yale Access app.

As it stands, then, the Yale Linus Smart Lock is a neater and easier solution than the Conexis L1, offering wider support for systems and better overall integrations. It’s also a step above the simple Nuki Smart Lock, which sports a chunkier design and is louder; Nuki’s only advantage is that it has an optional keyfob.

This leaves the main competition as the Brisant Secure Ultion Smart, which is an excellent lock, although you have to choose at the outset whether you want the Z-Wave-, Bluetooth- or HomeKit-compatible versions. You’ll also have to replace your existing lock and handle, although you do get an ultra-secure new cylinder as part of the process.

Ultimately, the Yale Linus Smart Lock is a simpler, easier-to-fit lock, and out-of-the-box it offers excellent integrations, from HomeKit to IFTTT. A keyfob option would have been welcome, but even without it, this is an excellent smart lock – although anyone with a lift-to-lock door will want the keypad for the dedicated lock button.