The Brisant Secure Ultion Smart has a secure cylinder lock at its heart, which is highly resistant to snapping. With a secure manual key providing peace of mind, this smart lock is a great option for those interested in switching to the smart option, but who are worried about what could go wrong. The only minor complexity is choosing which version to buy, with the HomeKit option sacrificing several features in order to work with Apple's ecosystem.

Smart locks are yet to take off in the UK, with the majority of folk holding off making the switch from keys to full-on keyless entry. The Brisant Secure Ultion Smart aims to make the transition smoother, offering full smartphone control of the lock combined with regular key entry for peace of mind.

The Brisant Secure Ultion Smart is based on the Danalock V3 smart lock, which is available in Denmark and the US. Rather than simply bringing the product over to the UK and rebadging it, Brisant Secure has built the smart lock around its own security.

Key to this product is the Brisant Secure cylinder lock, which replaces the one in your door. This is designed to be resistant to drilling and lock snapping, utilising a hidden lock that stops the cylinder from being broken or manipulated. Brisant offers a £1000 guarantee, claimable within 10 years of installation if you suffer a break-in due to the lock being snapped. This cylinder lock is operated by the 4mm-thick Ultion key, just like any regular door lock.

The standard Danalock V3 is a small cylinder that attaches to the inside of the door, and this version is available in the UK. However, most people will opt for the Ultion Smart that comes pre-fitted into a door handle for a neater finish. The handle sports a curved finish, which makes it more difficult for a thief to get a grip on it and snap it off. 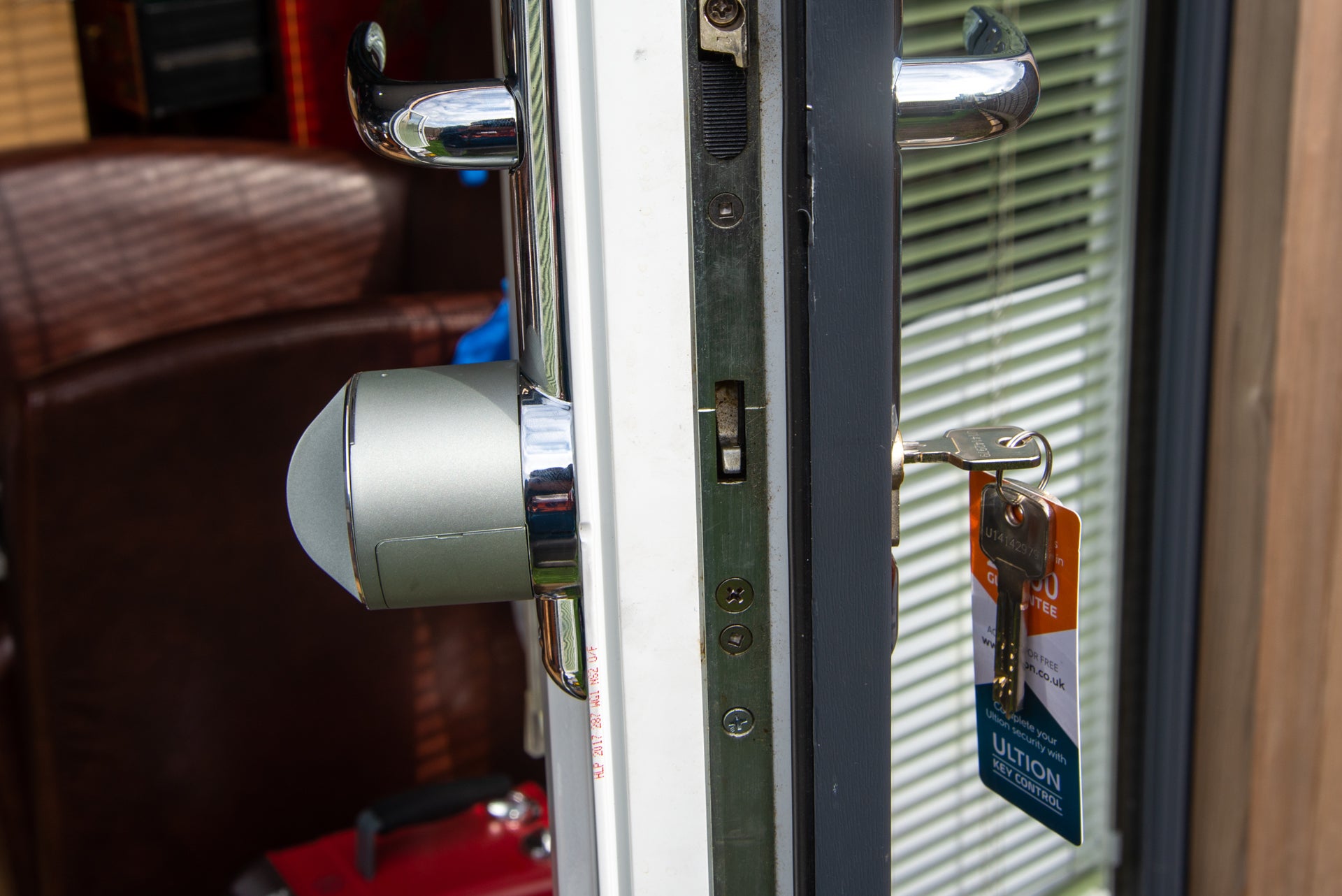 The finished product: key-operated and smart at the same time

There are two versions of the product available. The base model (£229) uses Bluetooth for phone communication, but it’s also compatible with Zigbee smart home systems for remote control, including the Amazon Echo Plus and Samsung SmartThings. There’s a more expensive Apple HomeKit version (£259), too, which I have on review. Both versions can be bought with professional installation for an additional £95.

How you operate the lock over the internet will depend on the version you opt for. For the HomeKit version, you need an Apple TV, HomePod or iPad within range, acting as a HomeKit bridge. The other version of the lock works through a smart home hub, although Brisant also sells its own dedicated bridge.

Installation in both cases is identical: simply remove the old lock and fit the new handle and cylinder lock in place. All-in, installation by a professional should take only a few minutes. A good DIYer shouldn’t take more than around 30 minutes to an hour.

The only instance that may prove tricky is an outwards opening door; the chunky internal mechanics can catch on some door frames. Check your door measurements and the advice on the website before you buy. However, such doors are the minority, so the Brisant Secure Ultion Smart will likely fit most UK doors with either a multi-point lock or Euro cylinder deadlocks. 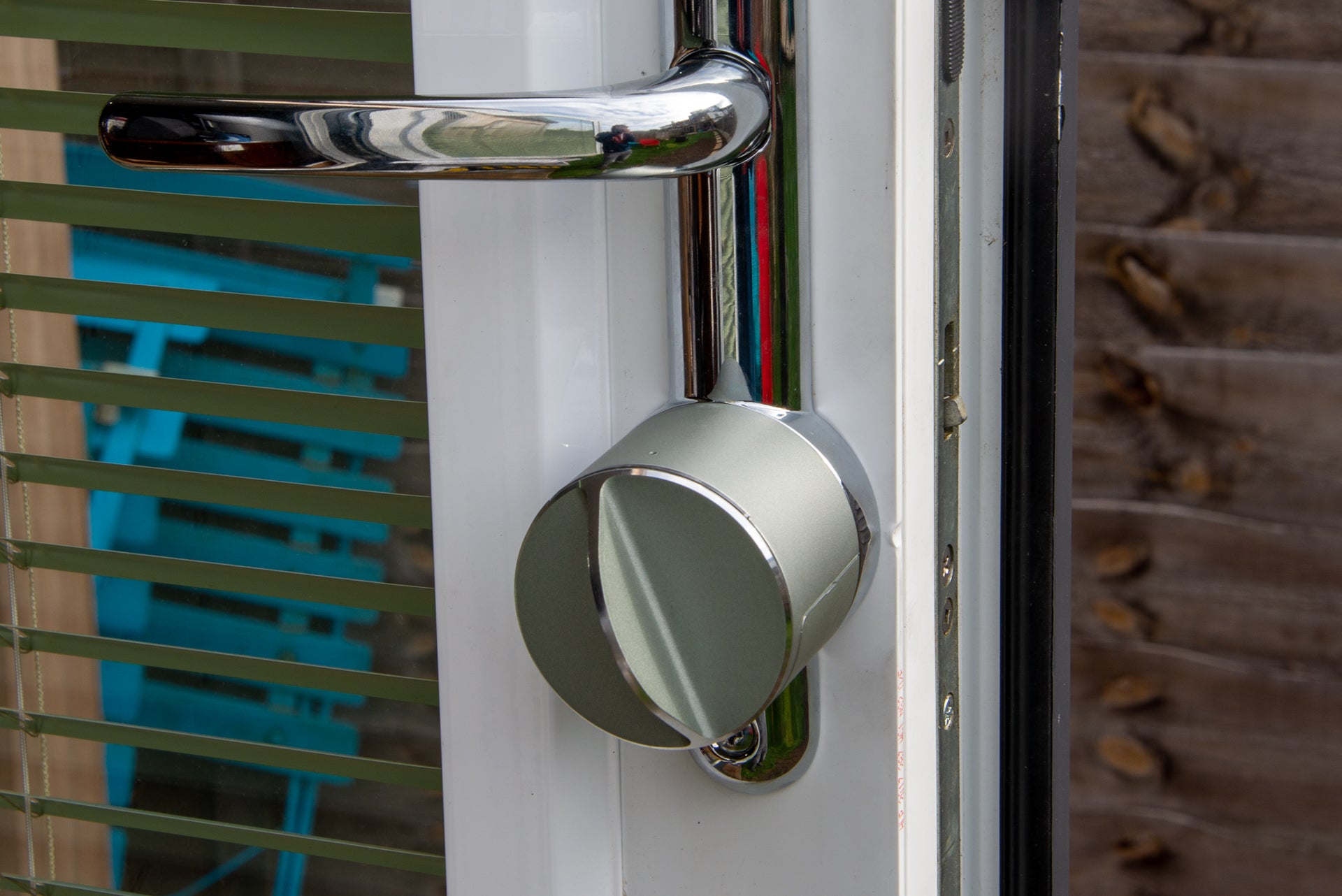 I installed the HomeKit version of the lock, with setup and configuration through the Apple Home app. This requires scanning of the HomeKit code, which is tucked away on a sticker located in the battery compartment. With my model, the sticker was folder in such a way that the code couldn’t be read by my phone’s camera; I had to enter it manually. Once in HomeKit, the lock can also be added to the Danalock app; Brisant Secure doesn’t have its own branded model.

It’s here where the two models diverge slightly, as the Bluetooth and Zigbee model is first added to the Danalock app, and then you connect it to a smart home system. There are some differences in the way the two locks work, too.

With the Bluetooth and Zigbee model, you can use the app to edit lock settings, add temporary users into the mix, and configure the auto-unlock feature. With auto-unlock, you set a radius around your home, and then when your phone enters the area in which it uses Bluetooth to hunt for your lock, unlocking your door as you reach it. Your lock is only unlocked once; you have to move out of the target radius and then back in for it to work again.

You can’t edit any setting for the HomeKit version through the app. Instead, you have to use click-commands: you stick a pin into the hole on top and tap a set number of times to access a feature. With HomeKit, there’s no way of temporarily sharing the lock with a guest (you can share your entire home), and the only way to enable auto-unlock is with an Apple Home Automation.

All versions of the lock have a few neat features. Twist assist is useful for those with arthritis in their hands: as soon as pressure is put on the thumb twist, the lock uses its motor to turn automatically.

Auto-lock is a handy feature, too. You can set the lock to automatically lock after the door being unlocked for 15 seconds or 30 seconds. It’s handy, as you can open the door, walk out and know that it will automatically lock again. Just remember: if you have a door that requires you to lift the handle first, you need to do this for the lock to operate. If you don’t want this automatic feature, there are two options: you can lock the door using the app or Apple Home, or you can put a key in the lock and turn it as normal. 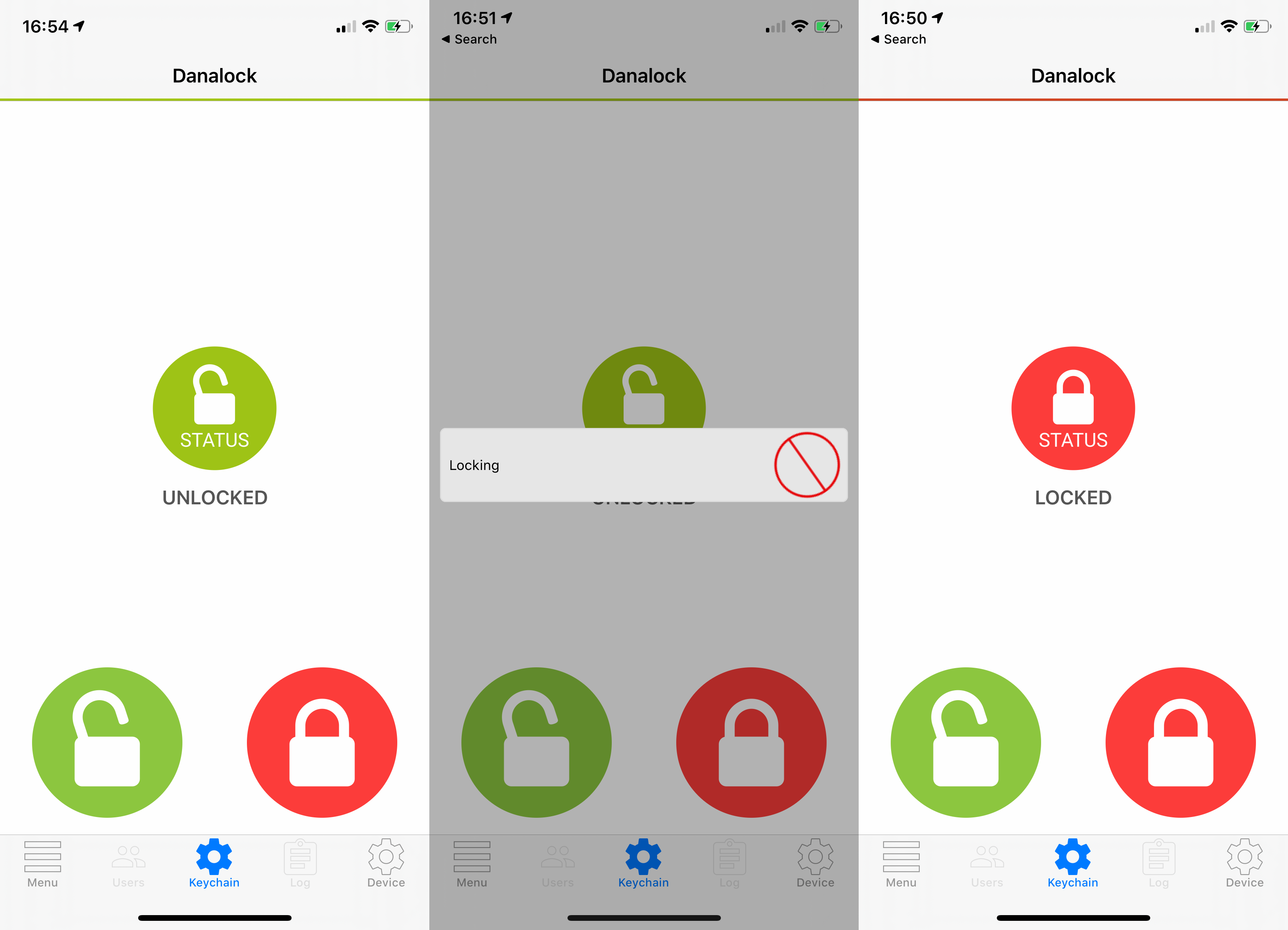 The app lets you lock and unlock the door

I marginally prefer the locking mechanism on the Yale Conexis L1, where you simply have to lift the handle to lock the door.

Performance – Works quickly and the key backup is handy for emergencies

I found that the Brisant Secure Ultion Smart was quick to respond to commands and that I much preferred using Apple Home to manually locking and unlocking it. I also set up an Automation to detect when I got home, with the Home app prompting me to unlock the lock when in range. 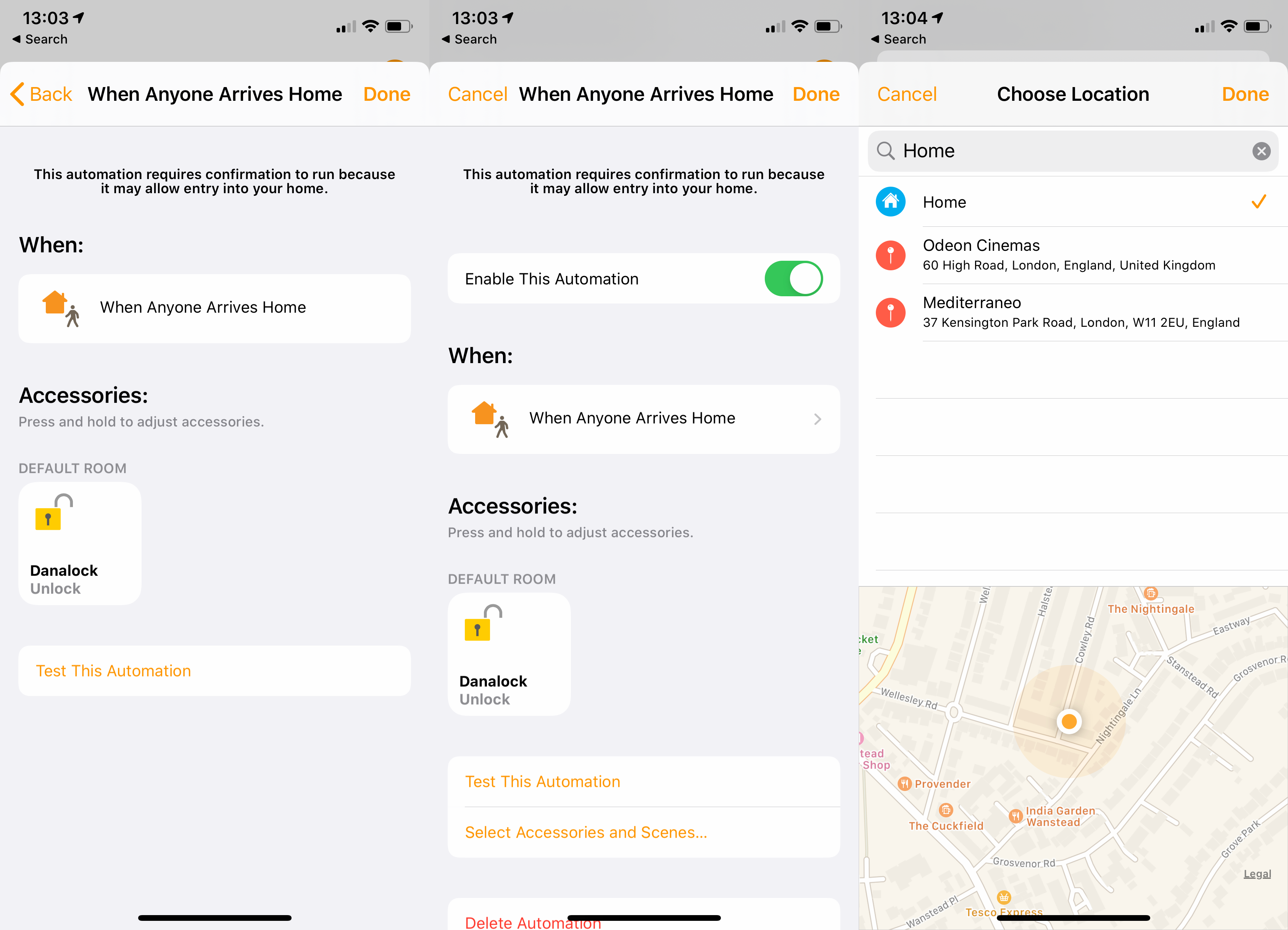 You can add the HomeKit one to Automations

However, as good as this is, it would be nice to have a simpler way to operate the lock. The Yale range of smart locks can also be operated via an RFID tag, just tapping to open: that’s typically quicker and easier to do than using either a key or an app.

Neatly, the lock’s operation can be set to control other automation, too. For example, you can set it so that when it unlocks, something else happens. In my case, installed in a home office, I set the lock to automatically turn off the Ring Alarm, using Homebridge running on a Raspberry Pi.

It’s great to have the backup of a physical key, too. If the Brisant Secure Ultion Smart runs out of power – no problem; simply stick in the key and turn the lock. This shouldn’t be too much of an issue, as batteries should last at least a year, depending on use. Just ensure you have a stash of CR123 batteries: the lock needs four to operate. Likewise, if there’s an issue with the lock – say, it breaks and won’t communicate – then there’s the physical key backup. 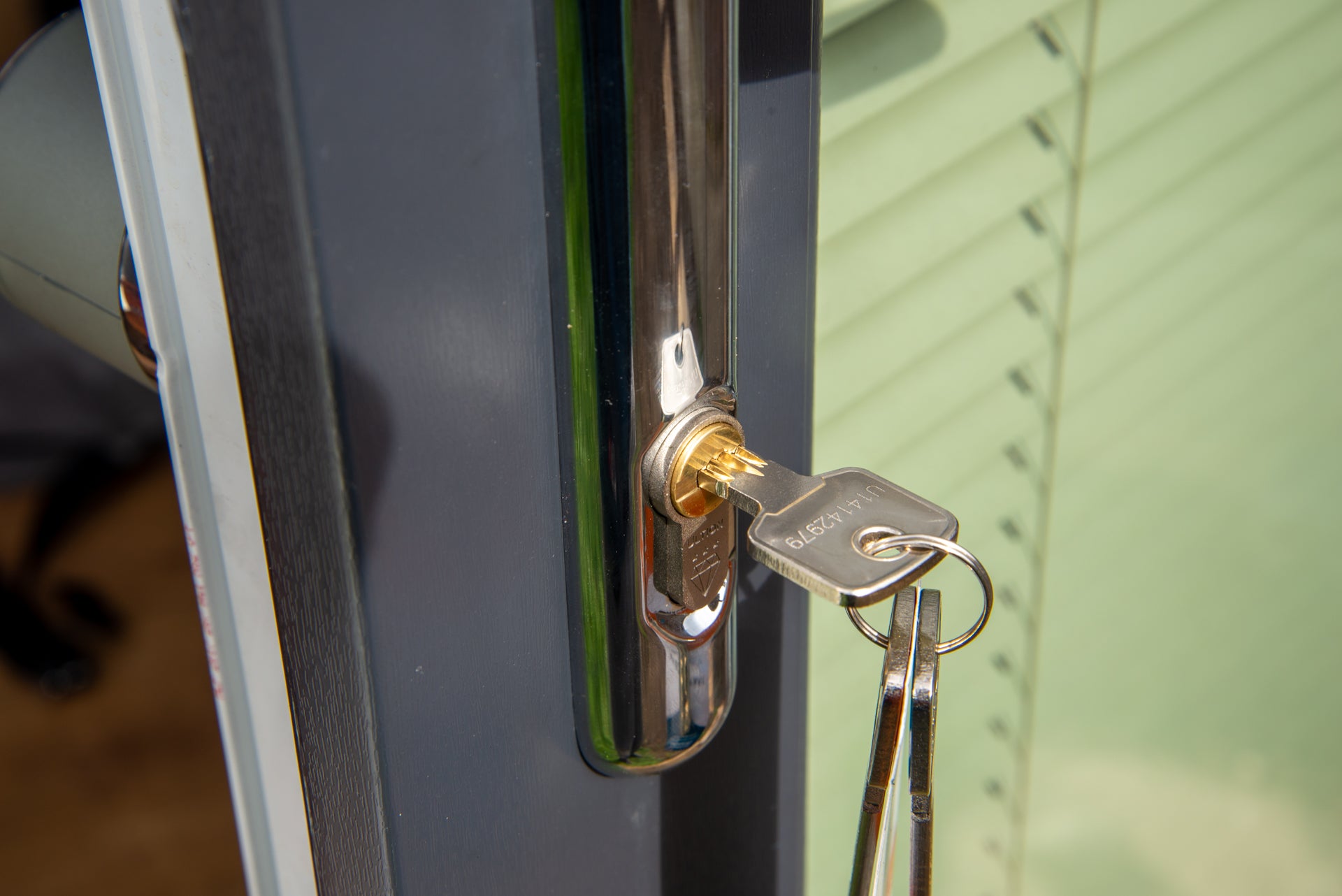 With the Yale Conexis L1, there’s no physical key on the outside, so any problems may result in you having to get a locksmith to take out the lock, damaging it in the process.

You’ll most likely want to carry a key around with you in any case (or have one stashed in a key safe) in case you lose your phone, or it runs out of battery when you’re out.

For those who want a second physical backup, there’s a remote keypad that you can buy (not compatible with the HomeKit version), which lets you unlock the door with a PIN. Plus, you can create up to 20 PINs for visitors, including temporary ones. It’s a shame this doesn’t work with the HomeKit version of the lock. The far more simple Nuki Smart Lock 2.0 works with HomeKit, and it lets you use a Bluetooth keypad, too.

Opt for the standard lock, and you can use it with IFTTT, setting up your own automation or adding voice control via Amazon Alexa. If you opt for the HomeKit version, you can use Siri on your phone to unlock; if you speak to a HomePod, you have to authenticate the action on your phone.

Should you buy the Brisant Secure Ultion Smart?

For those who have been considering a smart lock, but have been apprehensive about going entirely keyless, the Brisant Secure Ultion Smart should ease their fears. With its key operation as primary or backup, you have a smart lock that you can use in the same way you would a regular lock. Why bother then, we hear you say? Because of the benefits that come with a smart lock. Even if you don’t regularly use the app, there are several advantages including using the device to start home automation, plus you have a way to unlock the door when you’re not there – which is handy to let in a friend or family member who’s locked out.

In the UK, the main competition comes from the Yale Conexis L1. I prefer the locking mechanism on this model and love the RFID key tags. However, the lock is fiddly to install, it doesn’t have a regular keyhole as a backup, and it only works with multi-point locks with a lift-handle.

On balance, then, the Brisant Secure Ultion Smart is the better overall lock, particularly with its extra-secure cylinder lock. It’s just a matter of picking the right version. The HomeKit model is useful if you’re tied into Apple’s ecosystem, although it means you need iPhones in your home to make it work – and you lose out on quite a few features. Overall, the regular version is the more flexible unit for most people, providing the benefits of smart with the capability of a high-security standard lock.