If Yakuza 0’s open-world rendition is accurate, walking through the streets of Tokyo’s Kamurocho district and Osaka, Japan, must be a proper ball-ache. If someone’s not trying to pass you some complimentary pocket tissues, a group of street thugs will be trying to shake you down or some random passer-by will rope you into solving their life problems. I just want to pick up a gift for a squatter so I can trigger the next bit of this main quest.

Yakuza 0 is full of moments like this. It’s the gaming equivalent of being at work and tabbing out to Twitter every few minutes. Outside of procrastination, it’s like Twitter in another way, too – if you’ve ever witnessed the juxtaposition of world-weary politics stacked on a cute animal gif, you’ll know what I mean. The tone is all over the place. This isn’t a criticism, though – it makes it feel like anything could happen at any time. 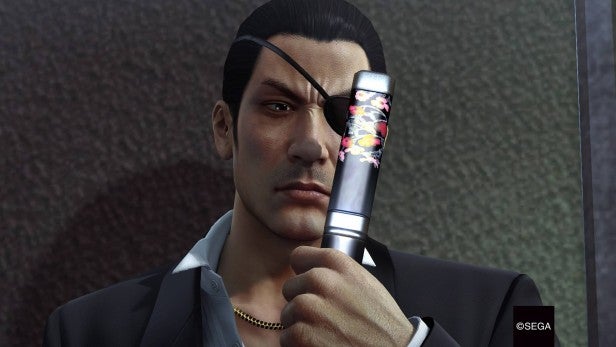 The two main stories – based around low-level Yakuza heavy, Kazuma Kiryu, and ex-Yakuza-turned cabaret manager, Goro Majima – both cover serious topics, as you’d expect from a game about mobsters who cut off their own pinkie fingers. But almost all of the optional stuff is whacky, fun or just plain weird. The main story sees you wrapped up in a plot involving a woman who’s gone blind from psychological trauma, yet minutes later you can be on a karaoke date, interjecting (shouting like an idiot) as someone else sings, like an absolute dad.

Yakuza veterans will probably be used to these tonal shifts, and relative Yakuza newcomers such as myself will appreciate the levity. Speaking of being a newcomer, Yakuza 0 is a perfect jumping-on point, thanks to the story taking us back to the dual protagonists’ formative years in 1988. Because it’s a prequel, there’s not much need for lengthy exposition and you’re free to get to know the main characters for the first time. Both – at least at this point in time – are gangsters with hearts of gold. Kazuma and Majima are also equally amazing at battering massive groups of people. Their styles are distinct, however, and each has their own upgrade tree and specialities.

Kazuma adopts a Brawler style that lets him power through enemies with crunchy counters and allows him to pick up weapons in the environment – knocking someone out with a bicycle is as excellent as it sounds. He also uses a style called Rush, which is built around fast punches and kicks, with a focus on speedy steps, dodging and weaving. Lastly, there’s the Beast style, where Kazuma rips and tears at enemies, automatically picking up objects mid-combo and flailing them around – this one’s great for groups.

Meanwhile, Majima has a balanced Thug style, functionally similar to Kazuma’s Brawler but with its own set of animations. Then there’s his Slugger style, in which he wields a metallic baseball bat for satisfying head donks. Last up, his Breaker style – picked up from a group of kids having a dance-off on an Osaka bridge – sees Majima channeling capoeira, a Brazilian breakdancing fighting style filled with unpredictable movements. Both characters also have a weapon style, which lets you equip weapons that can be purchased, found, or even procured through a minigame. 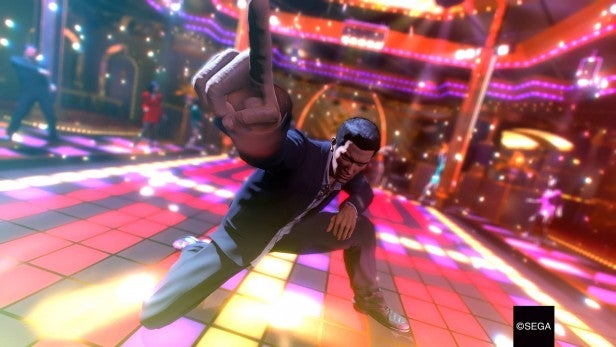 All four styles can be switched between during combat with a tap of the D-pad, so you’re free to mix it up as the battles dictate. There’s not a whole lot of nuance to the combat, as what style you opt for is usually dictated by the environment – Majima’s baseball bat isn’t so useful when it’s constantly bouncing off a wall, for example, while Kazuma’s Beast style is perfect for taking down groups, especially when grabbing an enemy and triggering its Heat action, a charged-up special where he swings an enemy around, using them as a battering ram on their friends before dumping them on the floor. Heat actions are context-sensitive, so you only need to know the conditions in which they will activate, watch out for the icon, and tap a button to watch the scene unfold.

When you’re not fighting, you’ll be wandering the streets and chatting to people – some of the dialogue is brilliant and Sega has done an incredible localisation job – as well as entertaining yourself in various minigames, or running your businesses. Yakuza 0’s list of things to do is as dense as Tokyo’s Shibuya Crossing. Some of them are brilliant, some are average, and some are pretty questionable, though it’s clearly a cultural difference. I’m talking wank dens. Little grotty places where you can go to watch softcore (like, really softcore) videos of Japanese women rubbing bubbles over their bikini-clad bodies. There’s even a box of tissues for you to clean up afterwards. I watched one, for science, and I cringed myself to death. I’m writing this review from the afterlife.

Fortunately, these activities are optional, though you’re constantly reminded that it’s a thing when you stumble across collectible cards of these real women, which unlocks another video. There’s a similar one where you chat up women on a phone, though at least the interaction goes both ways here, and the minigame – a strange shooter where you have to pick responses from some floating text bobbing around the screen – is actually rather fun. Elsewhere, there are Sega arcades filled with playable claw machines and Space Harrier cabinets. There’s rhythm-action in the form of disco dancing and karaoke. There’s Shogi, which is essentially Japanese chess. There are underground women’s wrestling leagues you can bet on. You can fish. There are pub games such as pool and darts. It’s absolutely packed. 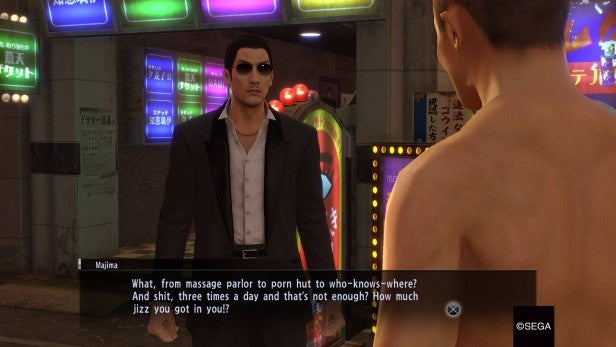 At one point, playing as Majima, I got completely absorbed in running my hostess bar and taking over fans from across Osaka. I dominated each territory in turn, dressed my best girls up in different attire, did their make-up, set staff for shifts, recruited, and ran each night’s shift, wrapped up in a game inside a game. I was at it for an entire day almost, and then I remembered I had the actual game to review and needed to press on. That’s the Yakuza 0 experience wrapped up in a single anecdote.

Despite the shallowness of the combat, you’re always being pulled towards something new, and you can’t help but be carried along by it. Whenever you tire of one thing, the next distraction or big set-piece is just a few minutes away – just be prepared to be offered pocket tissues, have a few scraps, and become someone’s agony aunt.

If you want to laugh, be surprised, and punch the air, you can’t get much better than this.