Kinect is many things. It’s an advanced motion sensor, a revolutionary add-on, and Microsoft’s best hope of socking it to Sony and Nintendo. Most of all, however, it’s a reinvention. The clues were already there in last week’s autumn dashboard update with its cheerful, family-friendly quick start guide, but what strikes you most about Kinect is that it’s an all-out attempt to transform the Xbox 360 from a hardcore gamer’s console into what’s effectively the logical next step forward from the Wii. If you don’t look at Kinect in this spirit – if you’re going to get antsy about response times, accuracy or how in hell you’re going to play an FPS on the thing, then you’re missing the point. Kinect wasn’t made for you.


Take it for what it is, however, and – with some pretty hefty caveats – Kinect is an incredible piece of tech.

Setup is a lot slicker and more trouble-free than you might expect. The sensor bar, which sits on it’s own, integral motorised stand, is placed above or below your TV. It plugs into your Xbox 360 via a USB cable, while drawing power from a separate wall-wart PSU (though owners of the latest slimline models will find that the USB cable provides enough power on its own). Hook it up, switch your Xbox 360 on, and the console will download a new update. Once that’s installed, the system runs you through a series of basic calibration tests to work out the noise levels and rough dimensions of the space you’re playing in. There’s not much more to it than that.


Well, there is a bit more. To get some of the more advanced features working properly, like automatic face-recognition sign-in, each player needs to go through a quick scan followed by a brief series of additional tests which, actually, are reasonably good fun. Parents of small children might note that they’ll struggle to complete these, both for technical reasons (Kinect seems to struggle with small dimensions) and practical (try getting a four-year-old to stand still for a few seconds, then move from spot to spot and strike a specific pose). Going through this process, however, seems to help tune the system for each player, and it’s something we’d recommend for any older child or adult.


Otherwise, the magic of Kinect is that, most of the time, it just works. The sensor angles and readjusts itself, so there’s no need to worry about that, and while you might experience minor issues with lighting, Kinect seems more forgiving on this count than PlayStation Move. The worst we’ve had is poor exposure in a photo in a game, and by retuning Kinect to work in different conditions you can help the hard-working sensor do its job.

That doesn’t mean that there aren’t some serious disappointments. Firstly, while the voice and gesture recognition works brilliantly, the integration into the dashboard isn’t as profound or as effective as it first appears. Saying “Xbox” gives you immediate access to a context-sensitive bar of speech commands, but within the Dashboard all you can do is launch the new Kinect Hub.

Within this, you can handle profiles, add and modify avatars, launch games, tune the sensor and access the Zune, Sky Player and Last.fm services. However, while you can look for a movie to rent, browse for music and watch Sky TV using voice commands and gestures, you probably won’t want to. Despite a beautiful, intuitive interface, it’s a slow and unwieldy way to do things, particularly if you want to search for an album or browse through Zune’s library of films.


More importantly, there’s no getting around the fact that Kinect is very tetchy about space. You really need a minimum of five feet of space between you and the sensor to make a game worth playing, and a further two or three feet behind you to play in. If you want to play with two players simultaneously in many games, including the bundled ”Kinect Adventures”, then you’ll need to stand even further back and have several feet to either side as well. Use the hub’s Kinect Tuner utility or stick to less demanding games, like the kart-style racer, ”Joyride”, and you can get away with slightly less, but only slightly. This rather makes all those smug comments made about the price of two-player Move setup sound a bit rich; if you want to play Kinect as Microsoft intended, you might have to buy a bigger house!

This is Kinect’s single biggest problem – and a bigger problem in the UK than it will be in areas of mainland Europe or the US. The fact is that where Wii works in just about every living room, and Move will work in most, Kinect needs space in which to work. If you have it, however, and you’re willing and able to move furniture around, then it’s worth it. Kinect really is something new, different and amazing.


The feeling starts when it first scans your face as you start a new game and places your avatar on screen, and carries on when you wiggle an arm or shake a leg and realise that your avatar is copying you exactly. There is lag, and you can see this in the efforts that some games have made to get around this. However, in the sorts of game that Kinect does well, it’s really not that much of an issue. It’s not the technical limitations that will stay with you, but that all-important sense of fun. 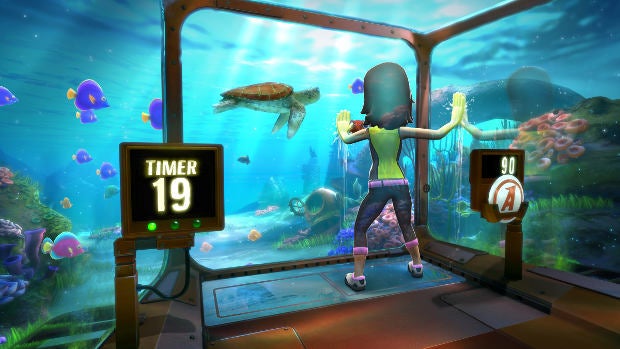 Take the bundled game, ”Kinect Adventures”, for example. While there’s nothing particularly clever or sophisticated about this mini-game collection, whacking balls at boxes using your head, body hands and feet not only makes you look stupid, it also puts a big smile on your face. The river rafting activity takes getting used to, but with two of you in the boat together, frantically scrambling left and right and trying to synchronize your jumps, it’s a blast. Ditto plugging holes with hands and feet in an underwater tank being attacked by psychotic fish. Ditto flapping your arms to float up and burst bubbles in the low gravity of an orbiting space station. To experience it is to love it.

The use of avatars is a key part of the appeal. When first introduced, the Xbox 360 avatars were all a bit pointless and “me too” (if not “Mii too”). Kinect has made them an essential part of the experience, just as they are on Wii. At the end of the day, we’d all rather see a cartoon version of ourselves playing table tennis than some muscle-bound goon designed to appeal to some adolescent demographic. 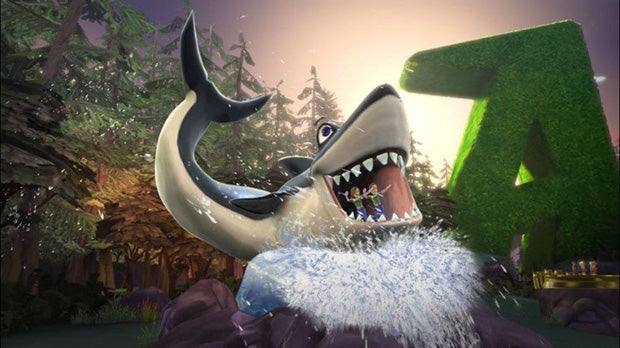 But Microsoft also has a few ideas of its own about how to add fun. For instance, in ”Kinect Adventures” completing a set of events unlocks a living statue, which will follow a pose and lip-synch a boast or a song. You can then save this or upload it to share with friends. Sure, it’s silly and pointless, but that doesn’t mean it’s not a laugh. Other games go big on humiliating photo highlights captured from Kinect’s RGB camera or even more embarrassingly, video footage. You’ll cringe, you’ll cheer, you’ll point and chuckle – and that’s what Kinect is all about.

Of course, some of these early Kinect titles share that classic Wii problem; they’re huge on novelty value, but lacking in long-term appeal. That’s the case with ”Kinect Adventures” and ”Joyride”, and we suspect it will be true of others too. However, the system already has a handful of serious system sellers, with the power to do what Wii Sports did for Nintendo. We’re talking about the sort of games that people will try, think wow, and want for themselves. On this count, Kinect does pretty well. 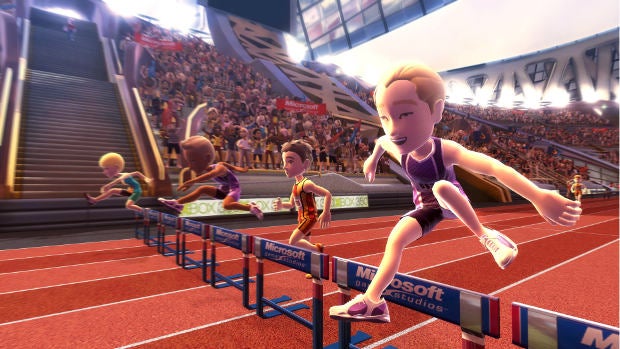 One is certainly ”Kinect Sports”. Sure, the track and field events are affected by lag and the table tennis shows up the fact that Kinect can’t match Move or Wii MotionPlus for snappy response and accuracy. All the same, there’s a decent amount of variety and gameplay in there, and every event is simple to pick up, great fun to play and entertaining to watch. 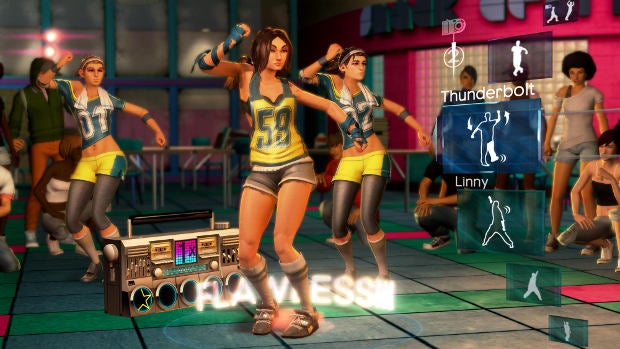 ”Dance Central”, meanwhile, will be eagerly picked up by the teenage girl/post-pub party crowds. For the first time we have a dance game that – amazingly – relies entirely on your ability to, you know, dance. It’s forgiving enough to be fun for the inept or inebriated (or both), but challenging enough to keep those blessed with natural rhythm coming back to show off. It’s not quite ”Rock Band” in depth, but it’s a very good start.

The other picks of the launch line-up would be ”Kinectimals” and ”Your Shape: Fitness Evolved”. We all knew the first would be irresistible for kids – what game that involved training cuddly tiger cubs wouldn’t be? – but it also has a fantastic sense of exploration and adventure, constantly rewarding you with new challenges that have you kicking, throwing and driving with a fiercely competitive zeal. It’s hugely absorbing. 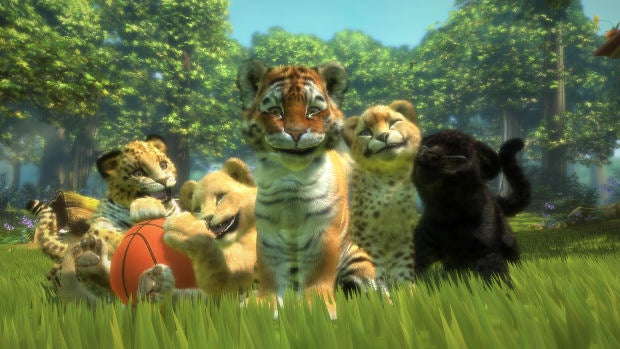 And while we suspect ”Your Shape” will fall from the old Wii Fit problem – you’ll obsessively play it for two weeks then guiltily neglect it for months on end – it’s also hugely impressive. Like real exercise, it’s exhausting, ache-inducing and ultimately rewarding, but like a game, it’s compelling and ingeniously goal-based. The killer is that it knows when you’re slacking, falling out of time or cheating, and it does its best to pull you back on track. It’s not as cute or instantly appealing as Wii Fit, but it’s probably going to prove a lot more effective. 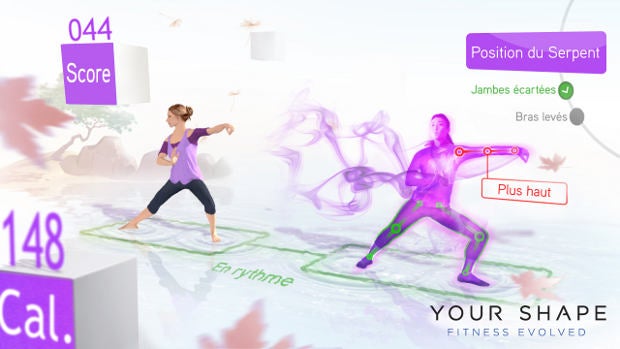 We know that some of you will have read about those games and sneered in disgust. You’ll moan about Wii-style shovelware and games for people who aren’t gamers. That’s fine. As we said, Kinect is not for you. The fact is, however, that Kinect delivers on Microsoft’s promise of turning you into a controller, and in a way that will leave those with enough space to play it in flabbergasted, gobsmacked, thrilled and entertained. Big questions remain over Kinect. Can the software be improved to reduce lag times or work better in a smaller space? Can Microsoft deliver a stream of great and innovative games? Maybe, maybe not. Whatever happens, this is an impressive start. 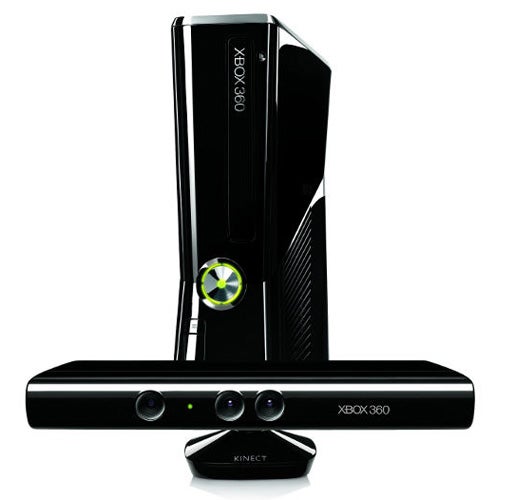 
Kinect has issues with space and size, and its games won’t appeal to the hardcore market. Yet it effortlessly transforms the Xbox 360 into a family games console, and one with more ‘wow’ factor than anything since the Wii. With several strong launch titles, there’s no reason not to dive in.