Silly now to think that we ever had any doubts about whether the Wii would be a success or not. Around 25 million of the things have now been sold, and the demand for the biggest games is such that your humble reviewer actually spent two days trying to buy – yes buy! – a copy of Mario Kart Wii some two weeks ago. Frankly, the machine doesn’t need any more coverage in the mainstream media or any more hype, but that’s exactly what it’s getting. Wii Fit is going to make the Wii as heavily-exposed this summer as it was when it launched. If one hasn’t already appeared on Richard and Judy, it’s only a matter of time. 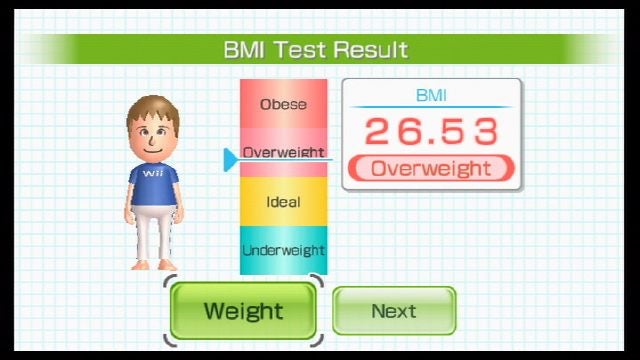 If you’re reading it on the day it’s published, this review is practically a pointless exercise. Either you pre-ordered Wii Fit several weeks ago, or your chances of getting it are practically zero. The balance board and Wii Fit bundle is already appearing on eBay at crazily inflated prices, and I suspect that you’ll have more luck finding hen’s teeth than you will grabbing a copy from your local Woolworths. All the same, you may already have pre-ordered, or you may be planning to order when the heat dies down. In either case, you’ve made an excellent decision.


To be honest, I’m not a keep-fit crazy kind of guy. If my body is a temple, it’s one where the priest demands regular offerings of burgers, beer, ice cream and Chicken Jalfrezi. I walk quite a bit, and I’ve gone through occasional phases of jogging or swimming, but I’d rather take a sharp kick to the family jewels than enrol with a gym or join a yoga class. All the same, Wii Fit has me well and truly hooked. 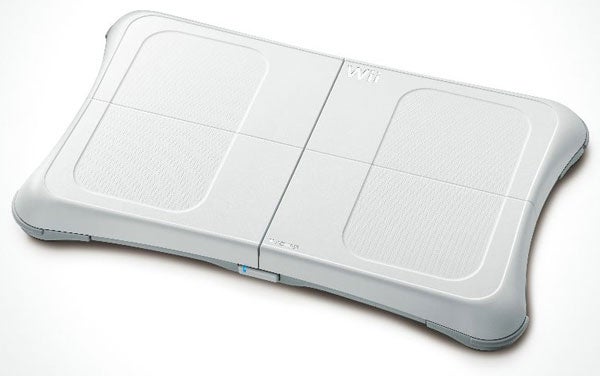 This is partly because Nintendo has taken cues from Brain Training and Big Brain Academy on the Wii and made Wii Fit a sort of Brain Training for the body. Having booted the game and switched on the balance board, the first thing you’ll do is register your profile, which is intelligently centred on your already created Mii persona. Having registered, the game takes you through a basic body test, working out your Body Mass Index from your stated height and measured weight, then putting you through two simple exercises that give it some idea of your posture and your balance. After that, it’s time for humiliation. Wii Fit generously hides your weight from prying eyes unless you are silly enough to ask for it, but your body age will be there for all to see. Mine kicked off at a mildly horrifying 49. As with Brain Training, you should really repeat this test every day, while engaging in exercises that will help you drag that dreaded age downwards. What’s more, the game also asks you to pick a particular objective, which could be as simple as maintaining your BMI over a two week period.

The balance board itself is a lovely bit of kit; roughly the size and shape of a luxurious set of bathroom scales, extremely solid, and connecting wirelessly to the Wii. It runs on four AA batteries, and mine is still going strong after a good week of use. The board seems able to read where and how much pressure you’re putting on it across the whole surface, enabling Wii Fit to work out whether you’re leaning in one direction or another, whether your heel or toe is taking the most weight and even your current centre of gravity. It might not look like much, but it’s a more sophisticated and sensitive peripheral than you might expect. What’s more, Nintendo has imbued it with extra personality by making it a character in the game itself, acting as a host throughout Wii Fit’s option menus, and even pleading with you not to stand on it during its short calibration routines. 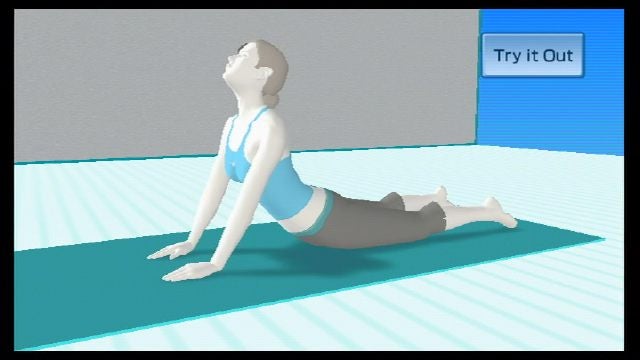 With registration over, we’re onto the good stuff, though it must be said that Wii Fit is a slightly schizophrenic affair. On the one hand, it has all the worthy stuff, comprising a series of Yoga exercises and a selection of workouts designed to improve your posture and build muscle tone. You stand on the balance board (or in some cases, squat or rest your hands on it) then follow a stylised instructor as he/she takes you through moves then repeats them while you copy. It’s all very nice, thoughtfully done and unthreatening, and you can choose whether you’d rather work with the guy or girl instructor (I suspect gender and sexual preference will make this decision for you). At the end of each exercise you’re rated depending on your movements and your balance (to the extent that the balance board detects them) giving you an idea whether Wii Fit thinks you are coordinated or a clutz. 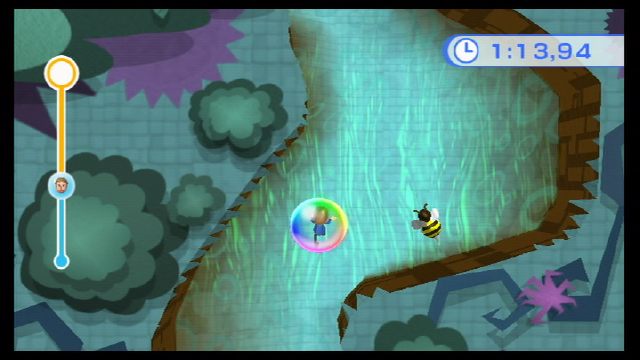 After a week or so you probably will feel some results from these exercises, but if this was all there was to Wii Fit then I’d have probably packed it off to the novelty cupboard by now. The sugar coating that makes the medicine go down comes in the assortment of balance and aerobic games that put the balance board to more entertaining use. With your Mii now centre stage, you can take part in slalom skiing, ski-jumping and football heading activities, not to mention hula hoop spinning and step classes, all powered by various combinations of walking and leaning. Suddenly you’re a human joystick, frantically stretching left and right to catch wide balls or get through the next gate. I don’t even want to talk about the gyrations involved in the hula hoop games, except to say that if a video ever ends up on YouTube then I might not be responsible for my actions. All in all, it’s the sort of simple stuff that made Wii Sports and Wii Play so instantly engaging, yet the fact that you’re still thinking about balance or that you’re still involved in a physical activity means that the game is still doing you a little good.

And here’s where things get clever. For one thing, Wii Fit logs every minute you spend in a game, exercise or workout in a sort of piggy bank. The more minutes you accrue in different activities, the more additional workouts, exercises and games you unlock. On top of that, each activity has its own high score chart. As with Brain Training, Wii Fit works best when you get other members of your family or household involved. Just as competition made maths tests a compelling challenge, so it also makes ski-jumping and hula-hooping addictive pursuits. Can you sit down and take it when your wife rules the roost in the slalom? Then get your sorry behind back off the sofa, and get those feet back on the board. 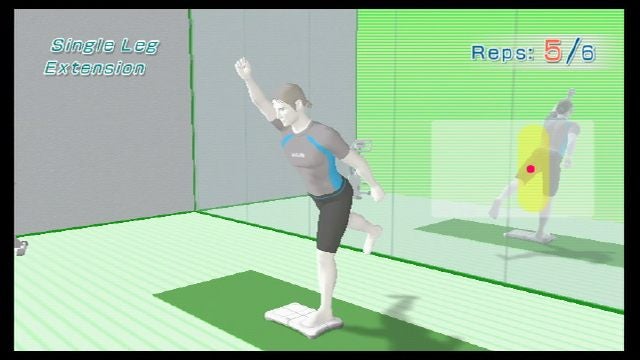 As time goes by you’ll unlock whole new games – for instance snowboarding, boxercise, tightrope walking, a simple marble rolling game and a particularly cool one where you navigate a bubble along a treacherous canyon river. You’ll also open trickier versions of the old ones. High-score will replace high-score, and new grounds for competition will emerge. Yet Wii Fit doesn’t need to rely on this alone – it can also coast on just sheer charm. Once again, the Mii concept seems like a masterstroke. It’s one thing to see your Mii on the screen playing out a step class on stage to a packed theatre full of Miis. It’s another to find yourself joined on the boards by your mates, relations and gaming rivals (including one guy I swear I’ve only played a couple of times in Mario Kart). 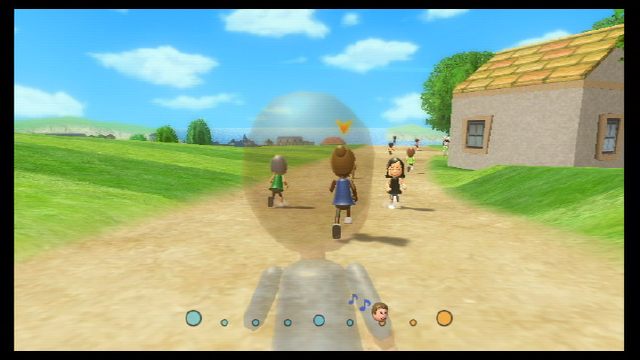 The Miis are simply everywhere; kicking footballs and miscellaneous objects at you in the heading test, throwing hoops at you to hula, or cheering you on as you tread gingerly along the tightrope. Wii Fit even manages to make virtual jogging fun. Hop off the balance board, stick a remote in your pocket and while you run on the spot your Mii takes a tour around a charming little island. The scenery is nice, and you might even spot the odd secret on your way. And didn’t your father-in-law just pass you? Was that your brother falling over? Isn’t it time you upped your pace? 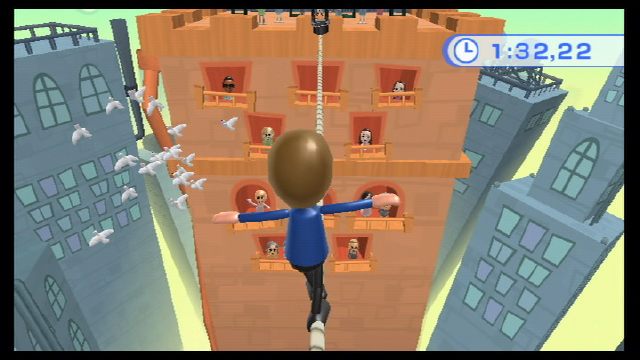 Let’s not get too excited. Sure, the novelty will wear off after a few weeks have gone by, and it isn’t always easy to take the ten minutes or so that Wii Fit requires of you at minimum every day. Without competition from friends or family, it’s easy to slide out of the habit fairly soon. There will also be times – particularly in the Yoga bits – where you realise that, rather than getting better at the posing and the breathing, you’ve actually just got better at the balancing that actually makes up the majority of your score. It’s no replacement for a gym membership or yoga classes, but then did you really expect it to be? 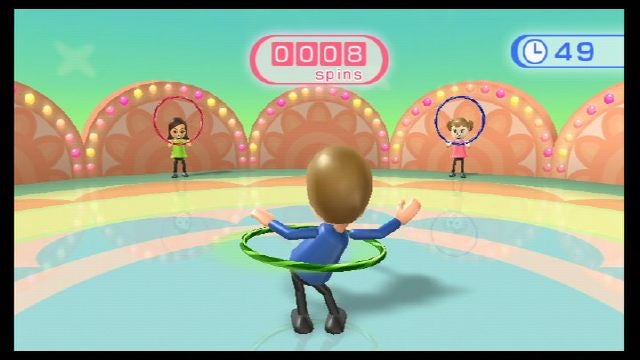 Once again we have an example of Nintendo taking gaming into brave new territories and making it work like you wouldn’t believe. As ever, you could argue that Sony got there first with EyeToy Play and EyeToy Kinetic, but Wii Fit does it in a more effective, accessible and involving way. And just as Wii Sports opened your eyes as to what Nintendo might do with the remote in future, so Wii Fit shows the potential of the balance board. I doubt this will be the last we’ll see of it. In conclusion, Wii Fit is another Wii must-have for those with a house full of family or friends, and if that includes you and you don’t already have a Wii, it’s another sure sign that you really, really ought to get one. That is, if you can.


Another crazy Nintendo idea that works. You’ll need time and dedication if you want to reap any real benefits to your health, but even if you fail you’ll have some fun along the way.