Compared to Microsoft’s much-hyped Xbox 360 Kinect, Sony’s PlayStation Move motion controller has always had a slightly low-tech feel. Instead of an advanced 3D camera and full-body motion control, Move harnesses the existing PlayStation Eye, a bundle of motion sensors and two glowing plastic bulbs to do the job. Perhaps that’s why some people out there have dismissed it as a sort of high-definition Wii, which is kind-of missing the point. For one thing, since when is that such a bad thing? For another, there’s so much more that Move can do. 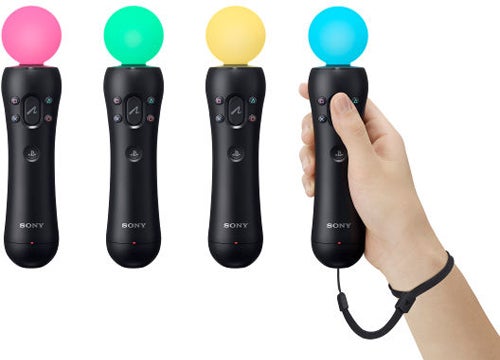 As far as the hardware goes, the news is mostly good. The Move controller itself is a great bit of work. Made from the same tough, matt-black plastic as the Dual Shock 3, it’s a solid, sculpted cylinder, with the glowing plastic bulb – which can rapidly and seamlessly change colours – at the top. The unit has a satisfying weight and balance, and it generally feels better in the hand than the Wii’s remote. It’s also powered by built-in Lithium Ion batteries, which last for around seven to eight hours of use.


Beneath the thumb you’ll find the new Move button surrounded by four small buttons, decorated with the classic cross, circle, triangle and square icons, and underneath the index finger, an analogue trigger. As the Move controller never has to double up as a joypad, it improves on the less-than intuitive layout of the Wii remote, and most of the early games seem to focus on the Move and trigger buttons in any case. 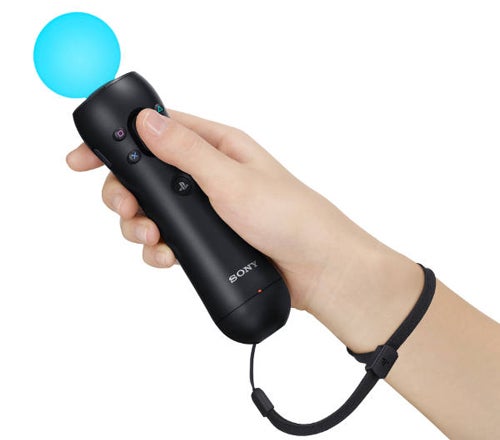 In general terms, setup and use is simple. Connect the mini-USB port at the base of the Move with a USB port on the PS3, and the battery charges. Press the PlayStation button while the controller is connected, and it pairs with your PS3. You can then use Move to navigate the XMB interface, holding down the trigger and moving the controller left and right or up and down to make selections, then pressing the Move button to activate the current item. It takes getting used to, but with practice it’s very slick indeed.

However, there are some problems. For Move to work, you also need to plug-in the PlayStation Eye and position it on or under your TV, pointing the lens where you’re going to stand or sit. As the Eye’s thick USB cable has a nasty habit of pulling the camera out of position, this isn’t as easy as it sounds, and you may have to find ways of securing it in place. What’s more, the Eye – at least in some games – seems to limit who can play them. 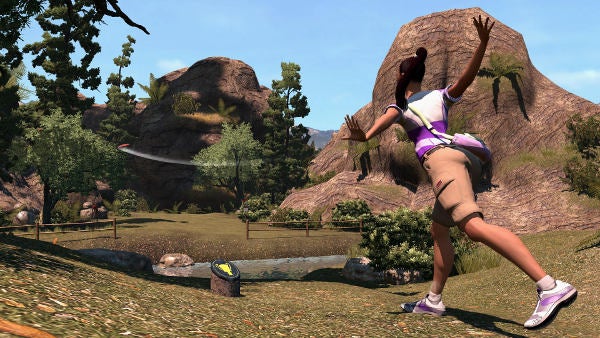 Even with the camera set to its wide-angle mode, it’s difficult to get adults and smaller children in the frame at the same time in an average sized room; something that won’t matter to the hardcore gamer, but might affect families with younger kids. There are also issues with lighting. Some games seem more sensitive than others, but to play, say, Sports Champions, we had to close curtains or switch off certain wall lights. These issues don’t crop up with the infra-red based Wii.


Still, one good thing about Move is its sheer flexibility. You can play most games with just the one controller, but some support two for added realism, and shooters and action games will support a nunchuck-style Navigation controller (which we’ve yet to receive samples of) to handle movement. If you don’t want to invest in this, however, you don’t have to: Move will also partner with a standard Dual Shock 3 controller if need be. 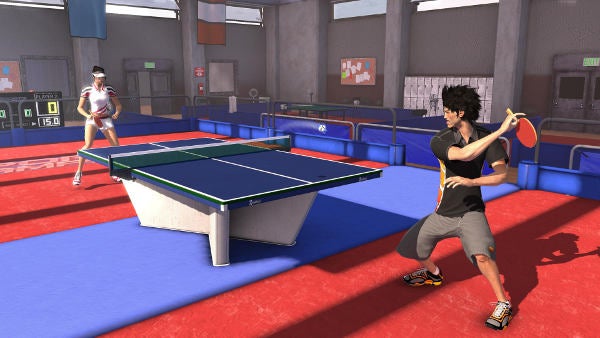 Calibration differs from game to game. In Sports Champions, for example, you calibrate the controller(s) before each event, holding the glowing bulb at your side, your shoulder and your belt buckle in turn. Other titles, like Start the Party and Kung-Fu Rider, ask you just to point the controller at the screen and press Move. In either case it’s not difficult, and Move seems to need less frequent recalibrating than the MotionPlus-enhanced Wii.

So, how does it perform? Well, there’s no question of the Move’s potential. Having played a wide range of titles at E3 and seen technical demonstrations performed live by the design team, it is already clear that there are ways in which Move takes motion control further than even the Wii with MotionPlus could. 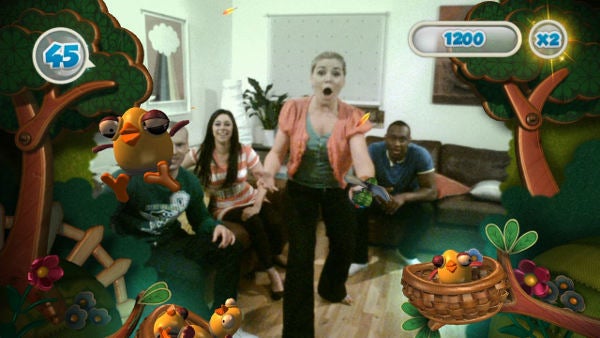 In titles, like Start the Party, where virtual objects are superimposed on top of the Move controller in a live video feed from the camera, you can see exactly how accurate and practically lag-free the controller is, and the skill with which the camera can track the glowing bulbs in 3D space offers up all sorts of possibilities when it comes to gesture recognition or manipulating objects on the screen. It’s also abundantly clear that Sony will move heaven and earth to make Move work with hardcore gaming titles.


Much of this potential is visible in the launch games we’ve been playing. Play Start the Party – a slightly twisted multiplayer-focused, mini-games compilation – and the speed and finesse with which the game can track your movements is consistently impressive, Sports Champions’ renderings of golf, table tennis, volleyball, gladiatorial duels, archery and petanque (a variant of boules) prove how sensitive the controller is to the details, whether the angle and position at which you hold the Move to the distance and velocity with which you move it. 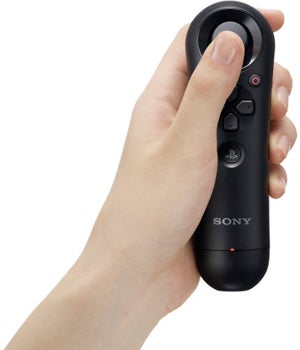 If the table tennis in Wii Sports Resort was good, then the Sports Champions version is uncanny; capturing the rapid snap of the stroke, the way stepping forward or backwards affects the shot, and allowing you to add all kinds of spin. From archery through to the sword-and-shield action of the gladiator duels, there’s no question that Move takes motion controls to a new layer of realism.


Playing other titles adds to the positive impression. Kung-Fu Riders – an oddity where you race office-chairs through the streets of Hong Kong – could have more precise controls, but Ubisoft’s excellent war-game, RUSE, proves that Move has the precision to work as a mouse replacement when it needs to.

Meanwhile, the Move-enabled Tiger Woods 11 is even more authentic than the superb Wii version. Watching the club move as you move the Move controller in real-time, the fidelity between controller and virtual club is superb, to the point where rotating the controller visibly opens or closes the face of the club to draw and fade the shot. If anything, it’s too realistic; without the real visual feedback of being able to see the ball between your feet and the club head swinging towards it, it’s very difficult to hit shots accurately and well. 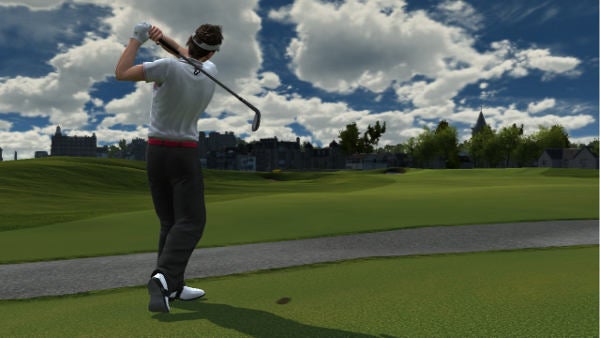 Still, it certainly bodes well for other Move sports titles, even if EA Sports has some work to do in making Move control easier to set up – unlike every other title it took some configuration on the PS3 and some work with options screens in-game to make it work.


All this is great, but at the moment Move desperately needs a ‘killer app.’ Nobody bought a Wii because they fancied the appeal of motion control and thought it might work well for future games – they bought it for Wii Sports. Alas, Move currently falls flat. The obvious contender – Sports Champions – is spoilt by its use of unlikable, meat-head characters instead of personalized Mii-style avatars, not to mention the fact that it isn’t actually that easy to pick up and play. Again, these things won’t matter to the hardcore gamer, but they’re not going to help Sony broaden its audience across the home.

Sony needs to sort this out because, while questions remain about the software, there’s no doubt that the hardware works extremely well. With such a reasonably entry price – just £30 per controller if you already have an Eye – all that stands against Move being a day one purchase is the lack of one amazing game. What’s there is good enough for early adopters to be getting on with, and there’s a lot more on the way, but we eagerly await a second wave of games to make Move feel an essential part of the PS3 experience, and not just an optional add-on.


Move ups the ante for motion controls with greater accuracy, flexibility and finesse than any rival. That said, the launch games lack the charm and ease-of-play that made the Wii such a blockbuster hit. Move deserves to be a must-have, but it needs stronger games to make that happen.