As with most sport franchises, the biggest hurdle that faces WWE 2K17 is what it can do to justify another annual purchase. Sometimes in such cases developers are forced to iterate as opposed to completely change the foundations. This is exactly what 2K has been doing for the last few years, and 2K17 is, arguably, the best of these miniature jumps.

While there may be some people who are disappointed by which modes have been included this time around – and we’ll get to that in due course – what matters most is how it plays. In that regard, 2K17 is the best version released by the company to date.

Since every move in a wrestling match should feel like it hurts, the pace of the game has been slowed right down – and it’s all the better for it. The impact of a bodyslam as someone is hurled into the mat is instantly apparent, and that goes for all manner of moves as well. Somewhat wonderfully, wrestlers actually sell these manoeuvrers, too, which is a far cry from when they’d leap back up to their feet regardless of what punishment had just been dealt out. 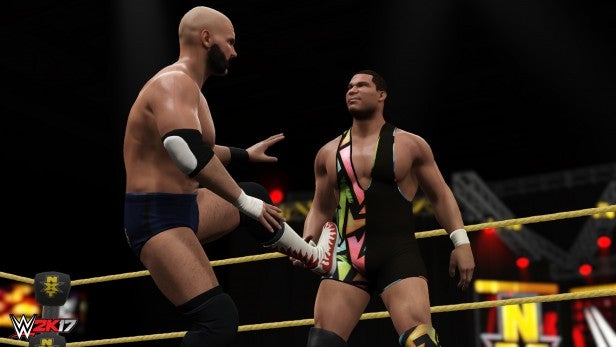 It’s obvious that 2K realises such small touches are important, hence why a “roll out” mechanic has been included this time around. It allows you to – surprise, surprise – roll out of the ring following a beating, and you have to be patient before you can get back involved. You can choose to shorten this period and return with less stamina, but that could very well be your undoing, given that you’re in a weakened state. In the past, wrestling games have been guilty of ignoring the idea of strategy or tactics. It’s nice that’s not the case here.

Such additions also tie in to certain match types. Multi-person encounters have always been messy in WWE. AI opponents would be far too eager to break up a pin – meaning it would go on forever – and if you were playing with friends it seemed impossible to win. It was just too easy to interrupt what would be a winning cover. That’s pretty much been eradicated now because of how both you and your opponents react to moves. They all take a physical toll on your digital fighter’s body. It’s the smartest way to make wrestling feel like wrestling.

Ultimately, then, WWE 2K17 is a success when it comes to in-ring action. Outside of it, however, is a different story.

Personally I think what’s here works and works well, but I can understand why there have been some raised eyebrows about the lack of a Showcase mode. Serving as the game’s single-player over the last few years, 2K made the decision to scrap it this time around in order to concentrate on other areas.

That was undoubtedly the right choice – the core experience is always key – but it’s fair to say that MyCareer and MyUniverse don’t really fill that void. If you’re someone who just wants to be hurled into the thick of things, neither will suffice; they both ask for a lot of time and effort. The fact that you have to create a wrestler with MyCareer may already be too much of a grind for some. A pre-prepared concept where you jump into someone else’s shoes is just a lot more accessible. 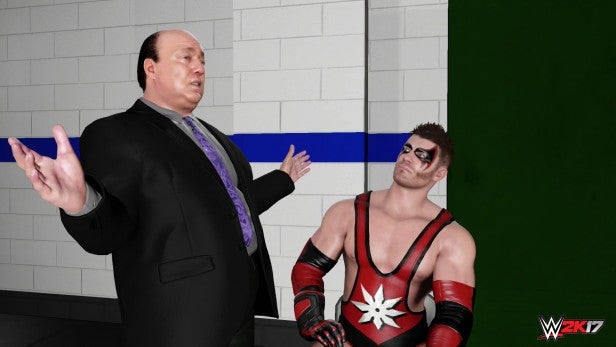 If you’re not of that mindset, however, WWE 2K17 will be a delight. The creator options remain some of the best in all of gaming, allowing you to create all kinds of abominations, and, of course, wrestlers who haven’t officially made it into the game. It’s almost baffling how accurate you can get.

Outside of this, the biggest arrival is that of 2K17’s promo mode. Anyone with even a passing interest in the sport of kings knows how crucial interviews are in the world of pro wrestling, and it’s a credit to 2K that it’s finally worked them in.

While extremely basic – you’re essentially presented with a list of dialogue options and have to pick the right one that matches up to your character’s personality – it’s a decent first effort. It’s a shame it’s all text at this point, and there’s not exactly a huge layer of depth here, but as a work in progress for the franchise – or one that will find its feet as the developer continues to tweak it – it’s a solid debut.

That may seem like a disappointment given that we’re talking about 2K17 here, but it’s a solid first step and one that had to be included sooner or later. A good promo can be as entertaining as a good match. If 2K is able to capture that in the future, then we’re all going to benefit. 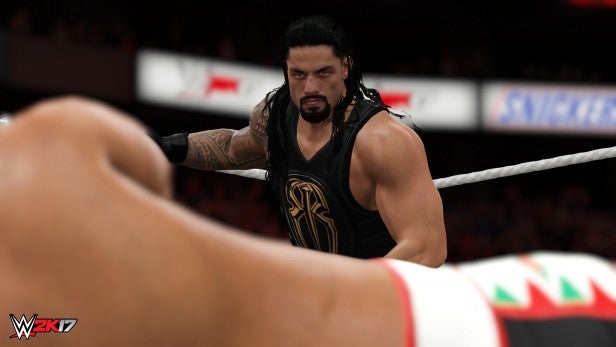 Otherwise it’s business as usual for WWE, with welcome returns such as the backstage brawls fitting in as if they’d never gone away, plus the biggest roster in the franchise’s history. It really is nice to be able to scroll through such a huge list of wrestlers, and it makes the number of potential match-ups unreal.

It’ll be interesting to see what the centrepiece is when 2K18 arrives, but at the very least, 2K17 will keep you busy for that 12-month period. It’s the best wrestling game in a long time.

WWE 2K17 is the best wrestling game in years and also introduces some new features that should become highlights over time. A complete overhaul at some point in the future wouldn’t go amiss, just to see what 2K is capable of with a fresh slate, but what’s been added here is all very welcome and well executed.

Sure, the lack of a showcase mode is disappointing, but the pros far outweigh the cons. 2K17 gets it right in the most important area, and that’s between the ropes.