Available on PC (version tested), PS4 and Xbox One

Like its much-loved predecessor, Shadow Warrior 2 seems to take us to an alternative universe where Halo and Call of Duty never happened and the FPS developed along the lines of late-’90s PC shooters. It looks bang up to date, but the core gameplay feels rooted in the glory days of Duke Nukem, Quake 2, Half-Life, Serious Sam and No-One Lives Forever. This is, in many ways, a wonderful thing. With its ludicrously intense, ultra-violent combat, daft one-liners and insatiable appetite for gore, this game from developer Flying Wild Hog is a great reminder of everything that once made the shooter so much fun. It’s just a shame that the appeal begins to wane after the first few hours.

Fans of the 2013 reboot or the 1997 original will already be comfortable with the basics. You play Lo Wang, a smart-mouthed ninja assassin in a world where pseudo-Oriental fantasy meets Chinese triad dramas meets Western sci-fi. The plot kicks off when the daughter of a crime boss, undercover in a sinister corporation’s lab, becomes possessed. A powerful magician extracts her soul from her body and places it in Wang’s, and the two join forces on a range of missions in the hope of stopping the corporation’s plans and restoring the girl to her normal state.

At least, I think that’s it – after a few hours, I found the plot so utterly baffling and the missions so devoid of meaning that I’d lost all sense of what was actually going on. 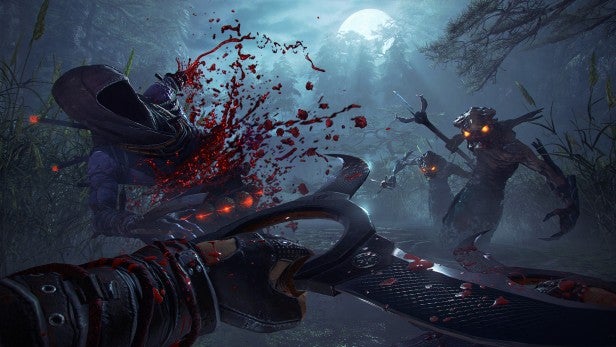 Still, this isn’t a game of narrative but a game of action. Wang begins with his trusty katana and a magnum, then goes on collecting weapons at a furious rate, giving you a ridiculous arsenal of guns, blades, monster claws, chainsaws and handheld artillery after just a few hours into the game. Now, Wang can wield a shotgun, grenade launcher or SMG with the best of them, but what always distinguished Shadow Warrior was its obsession with melee combat.

Holding back is not an option. Rush in, slash away, strafe left and right to dodge incoming blows. Watch as limbs divide from torsos and heads spin off into the distance. Hold and release your Alt-attack button to drive forwards through the enemy, splattering blood and gore, then use your magical powers to freeze your foes in place or knock them off their feet. Kinetic doesn’t even begin to cover it; Shadow Warrior 2 is one of the most blood-crazed, battle-mad, brawling-barmy games ever I’ve ever played. 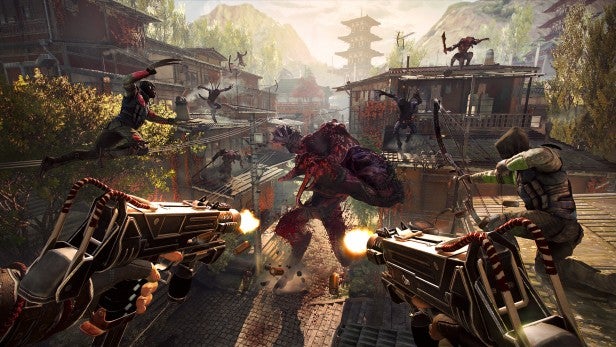 There’s also more to it than you might expect. Because of the sheer, stupid number of weapons available, simply deciding which to give a place on your quick-selection wheel can be a challenge. Beyond that, you can treat each and every one to a range of upgrades, giving them extra ammo or damage, faster reload times or a range of cool elemental effects. On top of this, Wang himself levels up, and you can spend skill points on upgrading his health, his powers of recovery and the whole gamut of melee, ranged and magical attacks.

Variety is also the watchword with the enemies, with each level seeming to introduce some new form of demon, ogre, monstrous beast or vengeful creature, not to mention the spandex-clad ninjas, drones, mechs and weaponised sex dolls that populate the sci-fi areas. Different foes demand different weapons and occasionally different strategies, though you can’t really accuse Shadow Warrior 2 of ever going too big on anything that requires a functioning brain. 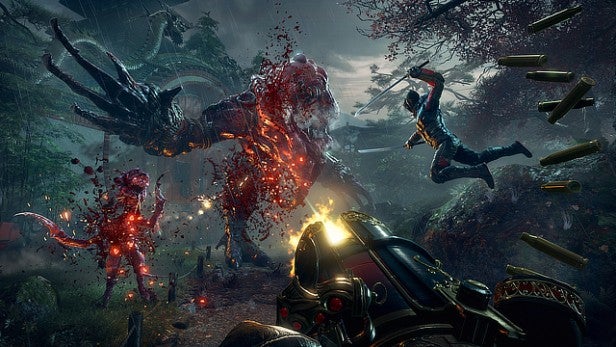 Up to a point, it’s irresistible. Despite excessive use of haze effects, Flying Wild Hog’s engine pulls off consistently impressive visuals that compare pretty well to what you’d get from a triple-A game. The music’s cool in a retro, ’90s-game-soundtrack kind of way, and Wang’s quips are occasionally funny, though a little wearing after a couple of hours.

While you might wish for a few more movement options beyond Wang’s double-jumps and forward rushes, he’s a nimble and responsive ninja warrior and the combat just feels right. Even several hours in, the action can be exhilarating and breathless, as you tackle vast hordes of goons and monsters, surviving just by the skin of your teeth. At one point Wang warns his spectral hitchhiker to prepare for a “tsunami of stupid”. He’s not kidding, but then stupid rarely feels so right.

However, it’s just not the kind of game you can play for hour after hour without finding it all just a teensy bit repetitive and exhausting. After a while, one rush of monsters feels like another. Many of the missions seem to blur, with the scenery and the enemies changing, but the actual nature of the gameplay staying much the same.

I suspect that some of this comes down to Flying Wild Hog’s decision to have procedurally generated levels. It’s a nice idea that means you’ll never play the same thing twice, but also prevents the kind of pacing, flow and build-up that makes a great FPS level so exciting. And when the game does depart from the formula, say, by putting you on a scavenger hunt to retrieve three missing notebooks, you can find that just getting from one to the next is a real pain. 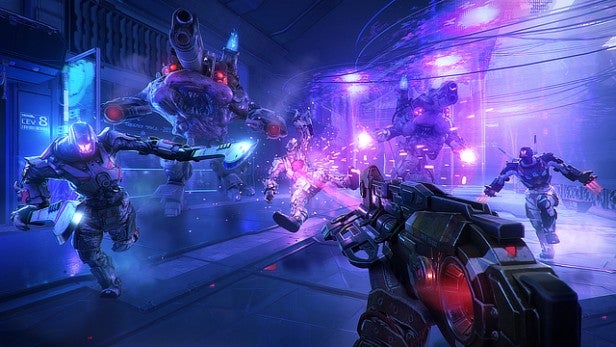 There are two solutions to this. One is just to play Shadow Warrior 2 in smaller chunks. The other is to play it in the way its developers have hinted: as a Kung-Fu Borderlands with extra blood and gore. Shadow Warrior 2 is the kind of game that could suit some co-op action, but its more Diablo-like mechanics aren’t as smooth or as smart as those in the Borderlands games. Managing your armoury and switching upgrades feels like hard work, while many of the ranged weapons aren’t that much fun to actually wield. Borderlands partly works because of the balance between its snipers, tanks, assassins, gunslingers and brawlers. Shadow Warrior 2 can’t give you the same variety of play styles.

And Shadow Warrior has one other problem. In a way, the 2013 reboot worked because it brought back the retro shooter style at a time when the modern, cinematic shooter was the only game in town. After years of Call of Duty, Battlefield and Halo, it felt like a breath of fresh air. This year, however, things are different, with Doom doing the retro shooter thing with more invention, imagination, polish and style. That doesn’t make Shadow Warrior 2 any less lovable, but compare the two and it’s just not in the same class.

Brilliant in hour-long doses, Shadow Warrior 2 doesn’t have the depth or variety in its core gameplay to hold your interest for hours at a time. The procedurally generated levels affect the flow and pacing of the missions, while all those ultra-violent battles become samey after a while.

It still has potential as a Borderlands-style co-op shooter, while those who like the sound of a modern-looking Blood or No-One Lives Forever will find a lot to love. Yet in a year where Doom has shown how you can bring an old classic back with inventive game mechanics, Shadow Warrior 2 seems content to keep doing what it’s doing and not a whole lot more.