One year on, the Nintendo Switch‘s novelty still hasn’t worn off. This is because, as well as offering player’s classic Mario and Zelda gaming on the go, Nintendo’s also managed to extend the experience to true AAA titles. Wolfenstein 2: The New Colossus (Switch edition) continues this trend. and is a fantastic example why the Switch is so great.

The real joy here is that — surprise, surprise — the World War 2 themed FPS is now available in handheld form. It doesn’t look as good as it does on the PS4 or Xbox One and it’s not as smooth, especially during particularly busy scenes. But the fact you can now play it on your morning commute more than makes up for this.

This is because, frame rate issues aside, the core game play is as good as it was in 2017. A proper old-school, over the top first-person shooter that presents an alternate reality where the Nazis are in control, you step into the shoes of William “B.J.” Blazkowicz and shoot at anything that dares to move. 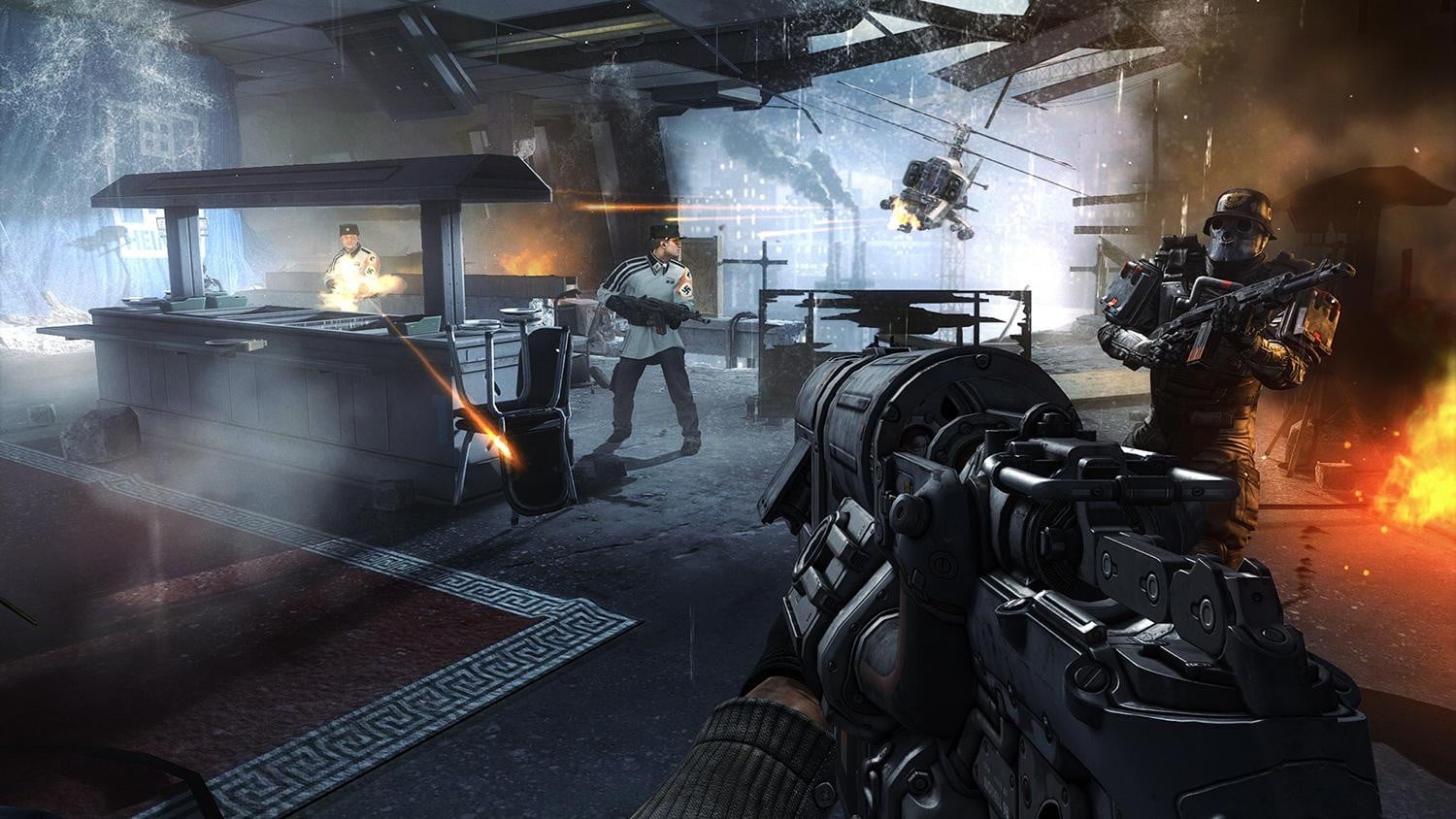 Developer MachineGames revels in the idea, offering you gun-after-gun until the options for how to do away with your opponent are through the roof. It’s possible to tweak and tinker with all of these as well to suit your play-style, and some of the carnage you’ll get involved in is utterly bonkers which is great – there isn’t much invention in terms of shooting enemies in the face in the modern day. Wolfenstein bucks that trend.

It’s also genuinely tough, even on the lower difficulty levels, which is yet another step in the right direction when we’re talking about the Switch. For years Nintendo has been criticised in certain circles for not having this type of game for its audience and now that argument can vanish.

If nothing else it’s a proper FPS on a Nintendo machine which is not a regular occurrence, and the fact it’s a truly great one is something to celebrate. It is important to note that you should not turn on the Switch’s motion controls. Trying to fire bullets in a chosen direction is more difficult than it needs to be when you’re hurling your arms around the place. As a five-minute gimmick it’s fun enough, but outside of that, there’s no reason to even think about them. They don’t add anything. 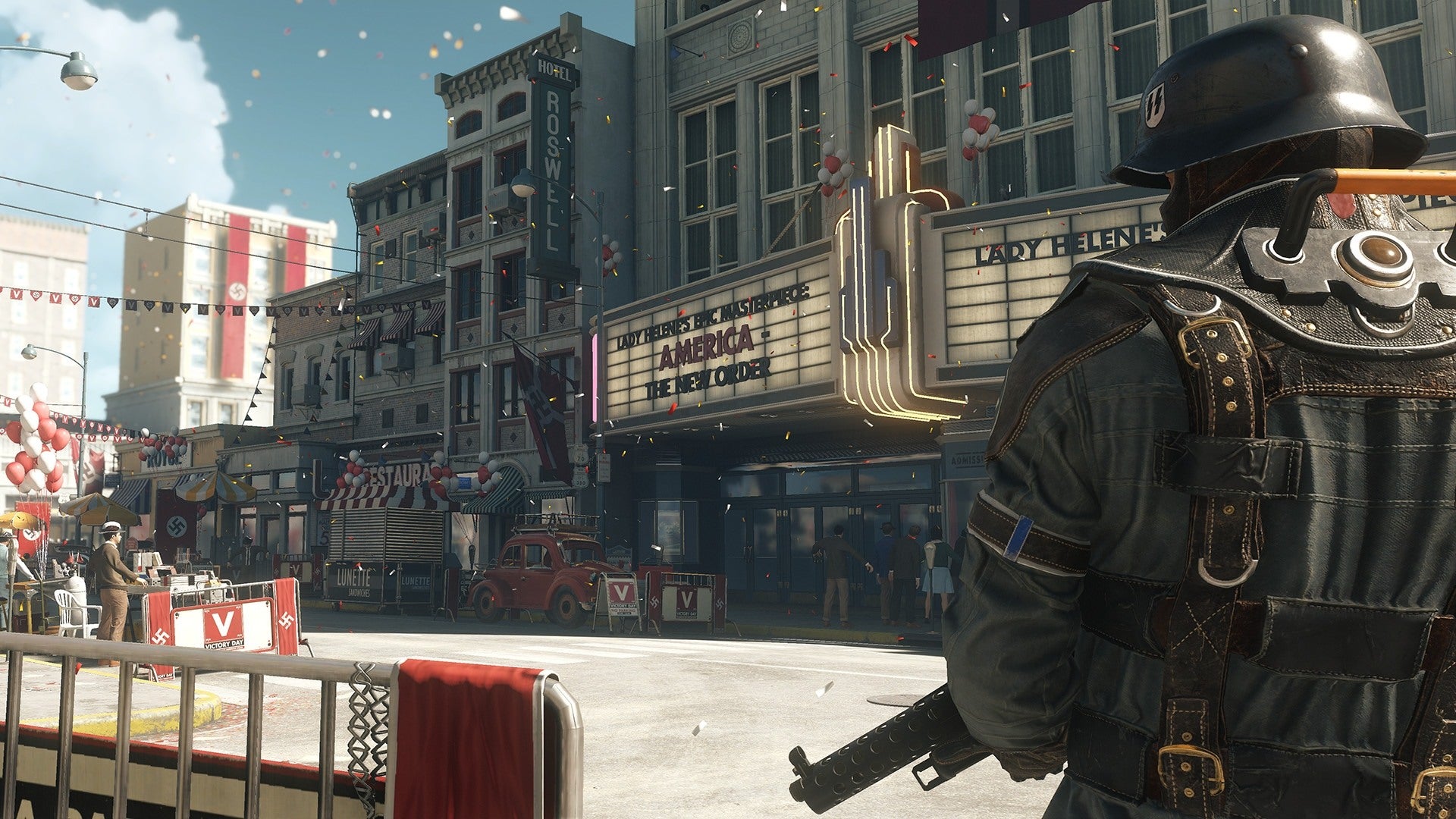 Without wanting to state the obvious, this really is Wolfenstein 2 on the Switch with few negatives to focus on. There’s no point going back to it if you had your fill last year, but for anyone in desperate need of a mature FPS on a Nintendo machine, all your dreams have been answered. Admittedly The New Colossus is a tiny bit all over the place in terms of tone – it veers from wanting to be taken seriously to having some of the most ridiculous cutscenes you’re ever likely to see – but such a shift seems to please as many as it annoys. It’s a stylistic choice and, ultimately, doesn’t hurt the core of the game.

If you want to get really picky it’s also a shame MachineGames didn’t include a multiplayer mode, simply because the gameplay would lend itself so well to person vs person warfare. Again, though, it’s not something Wolfenstein 2 is necessarily missing. It just would’ve been a welcome treat for Nintendo fans who had to wait an extra eight months before having the chance to get involved.

Either way, if you’re looking for a way to fly through your commute while trying to bring freedom back to planet Earth, this is the title for you. The Switch’s library continues to do no wrong and signs show it’ll only get stronger as time goes past.

Wolfenstein 2: The New Colossus is a fantastic Switch port courtesy of Bethesda and Panic Button which takes last year’s awesome FPS and ensures it continues that legacy even when you’re playing it on the move. Another great addition to the ever-growing Nintendo library.