Available on PC
Out now

The trouble with massively multiplayer online RPGs (MMORPGs) is that, once the initial excitement over their launch has died down, they can mutate, grow and generally improve on a regular basis – but the world beyond those people who play them on a regular basis remains blissfully unaware. So it makes sense for the developers and publishers of MMORPGs to confine themselves to tweaking on a daily basis, while working on major updates about which they can create a fuss. That is the exact strategy publisher NCSoft and developer Carbine have employed with WildStar, their successful sci-fi MMORPG.

WildStar has already had one post-launch moment in the spotlight, when it went free-to-play at the end of September 2015. But it is poised to benefit from a massive injection of new content over the next few months, in the form of a major update entitled Destination Arcterra. 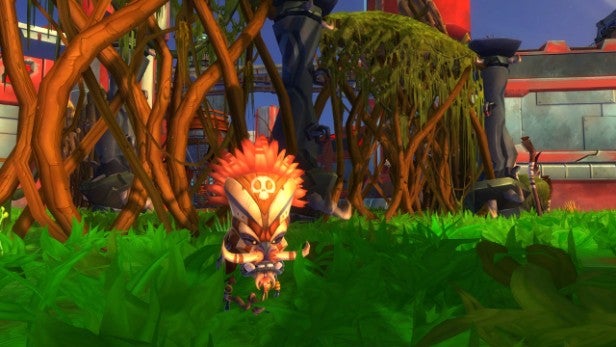 Before we drill down into the detail behind Destination Arcterra, it’s worth a recap on WildStar, for those who haven’t yet discovered its charms. It’s one of the more action-oriented MMORPGs out there, with a more sci-fi-influenced theme than we’re accustomed to encountering in fantasy MMOs. It takes place on the newly discovered planet Nexus, which has been mysteriously abandoned by a race called the Eldan, who left all manner of technology (including vehicles that can be raced, known as “mounts”) behind. The early stages of its storyline explain the disappearance of the Eldan and the emergence of two factions, the Dominion and the Exiles. Other notable aspects of the game include a housing system which enables players to create their own, thoroughly individualised, spaces and stylised, comic-book-influenced graphics. 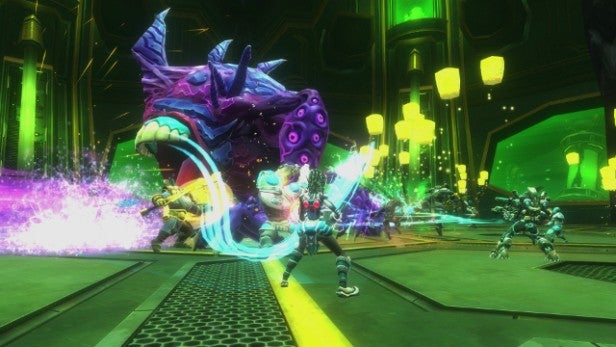 Carbine’s Creative Director, Chad Moore, talked us through how WildStar will be mutating and expanding over the next couple of months: “Destination Arcterra is the first major update since WildStar went free-to-play. It has three major components. The first is Arcterra itself, a new maximum-level zone with unique quests and bosses, and lots of new zone mechanics. The second element is Vault of the Archon, which is chapter two of the Nexus Saga, the main story quest. And the third component is a new item-upgrade system, which will allow players to level up their gear, and covers items, weapons, armour and runes.”

Arcterra is Nexus’s frozen wasteland – and Moore is proud of its visuals, pointing out that its look was designed by a new Art Director who Carbine engaged last year, and that it takes advantage of new lighting and shaders which haven’t yet reached the rest of Nexus. Moore describes a new mechanic unique to the zone: “It has “snowballing” boss encounters – at first, two-man bosses are spawned, and as you kill them, a meter which tracks zone-wide kills fills up. As players cross a certain point, 5-man bosses start appearing, and eventually 20-man ones.”

“Then there is a dynamic blizzard event, which brings a new set of 20-man bosses, each of which drops a key when you kill it. The first faction to collect enough keys will get exclusive access to a new dungeon that appears for the next 24 hours. And Arcterra has unique zone loot, with its own reward track; the more of the new content they do, the faster they will fill up that reward track, bringing things such as a unique mount and costume.” 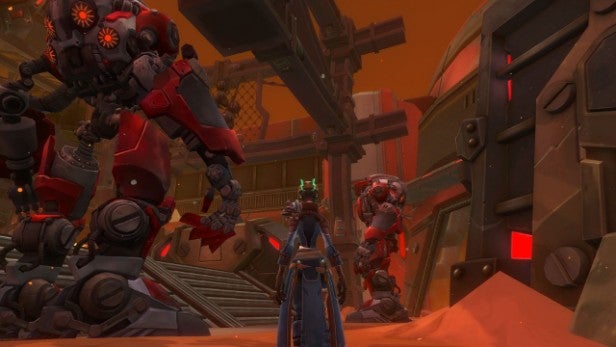 Moore explained that traversing Arcterra will lead players to the Vault of the Archon, where the second chapter in WildStar’s main storyline will unfold. Moore said: “One of the different aspects of Vault of the Archon is that it is multiplayer, whereas the first chapter, Journey into OMNICore-1, was single-player only. You can still play Vault of the Archon solo, but it accommodates up to five players. And there are two iconic characters who serve as guides for each faction: Dorian Walker for the Exiles and Artemis Zin for the Dominion. Overall, Vault of the Archon is something of an Indiana Jones-like adventure.”

A while after the arrival of Arcterra and Vault of the Archon, but still in the first half of 2016, NCSoft and Carbine plan to bring several other things to WildStar. Chief among which is the new item upgrade system, which Moore explained: “This will allow players to take any weapon, armour or rune and increase that item’s power up to five levels, through collecting upgrade components. And you will get those upgrade components by salvaging gear. When you salvage an item, you can choose from one of three component types: runecrafting, trade-skills or item-upgrade. This enhances the economy around items, and means that any item you receive can be used to make what you already have more effective.” 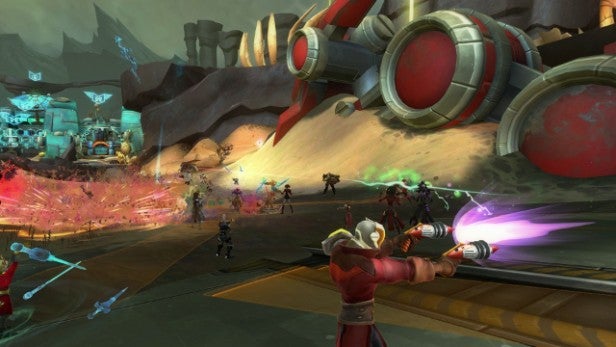 Also in the first half of the year, WildStar will finally become available via Steam, and Carbine and NCSoft will add a 20-player Raid called Redmoon Terror. This should create some excitement among seasoned WildStar campaigners, since it will be the first major Raid since a few months after WildStar first went live. The Redmoon Terror is a ship drifting in space, housing the characters Mordechai Redmoon and Laveka the Dark-Hearted, who will muster vast numbers of zombie pirates that players will take on. Its bosses, we’re promised, will feature a completely new spell mechanic and, unusually, players will be able to choose the difficulty of each boss before engaging them. Redmoon Terror will debut on WildStar’s Public Test Realm (PTR) – Moore said that it will first appear in “spring”.

First Impressions
As MMORPG updates go, what Carbine and NCSoft have planned for WildStar in the near future sounds pretty comprehensive, and it’s very encouraging that those plans include tweaking gameplay mechanics and the game’s visuals. Existing WildStar players will undoubtedly be itching to explore Arcterra as soon as it comes online (alas, we don’t yet have an exact date for when that happens, although it should be a matter of weeks rather than months), and those who are seeking an MMORPG that exists outside the World of Warcraft Tolkienesque norm would do well to check it out when the new content goes on-stream – the joy of free-to-play MMOs is that you can try them out without expending a solitary penny.