Wasteland 3 is a solid tactical RPG that will keep fans of the genre entertained for hours upon hours. But it doesn't do enough to bring the genre forward to a mainstream audience.

Wasteland 3 is Divinity Original Sin in post-apocalypse America. That’s the short version and if you know what that means and like the idea there’s no need to keep reading this review. Just go and buy it.

But, if you’re still on the fence, or confused about what that means, here are the specifics. Wasteland 3 is a new isometric, turn-based tactical RPG in the same vein as the popular Pillars of Eternity, Divinity and Shadowrun series of games.

It tasks you to step into the shoes of a fictional hero, build a crew of ramshackle soldiers and survive amidst a hostile landscape. Outside of tweaks to the character creation and development mechanics the only big difference between it and other titles in the genre is its setting.

The game puts you in the shoes of a Ranger. These are a group of elite soldiers looking to restore order in a post-apocalyptic America suffering in the aftermath of a nuclear war. The game follows on from the events of the first two games, seeing you travel to Colorado at the behest of the region’s self appointed leader, “the Patriarch”, who needs help quelling a slew of potential rebellions against him. 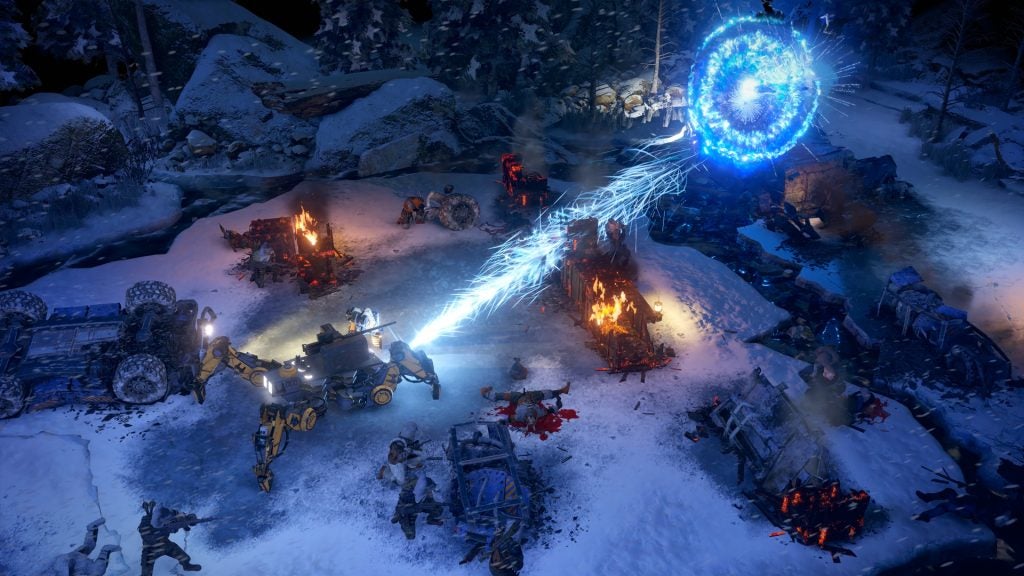 If this sounds similar to the plot of a Fallout game, it should. Wasteland and Fallout are two series with very similar histories. Before Bethesda bought Fallout and turned it into an open-world, first-person RPG the franchise was also an isometric, turn-based RPG. This may make Wasteland 3 not terribly original, but, despite the gameplay and settings feeling very similar to other franchises, it still manages to be fun because it gets nearly all the basics right.

For anyone that’s played a Divinity, Pillars or Shadowrun game the mechanics will feel instantly familiar. Once the opening cutscene finishes you’re tasked to either pick from a selection of prebuilt characters or create your own custom hero, again exactly like Divinity Original Sin. In multiplayer each player takes control of a single protagonist, while in single player you manage two.

If you don’t want to build a character you can pick between a selection of pre-built squads, each of which come with a unique specialisation, look and backstory. Specifically, you can pick between the combat-focused Young Rangers, melee-driven Punk Lovers, stealthy Father Daughter, science-led Mentor and Student and A-team-esque Tech Heads. 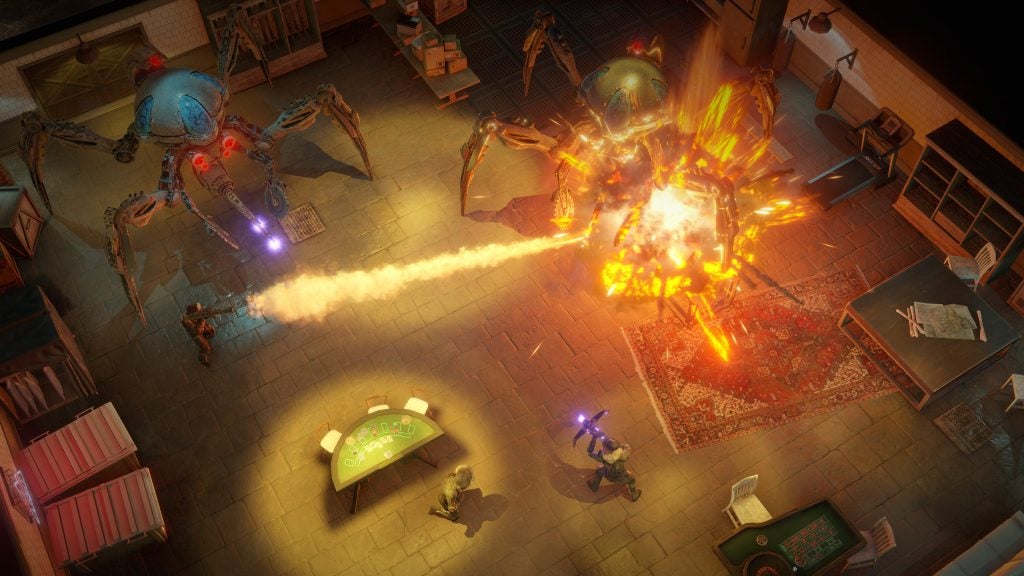 The stock characters offer a decent selection for those in a hurry and stick fairly closely to the traditional model/tropes seen in most modern post-apocalypse TVs, movies and games. For those looking to carve their own path from the get-go, character creation is par for the course in the genre. You get to make basic changes to your characters’ appearance, picking their face, hair, height, voice and clothes.

From there you go on to pick a basic backstory, starting weapons, attributes, skills and quirks. Like a lot of modern games the character creation and development mechanics are class free, letting you free wheel the progression trees to create your own unique build.

This may sound intimidating but Wasteland 3 does a good job explaining what each metric does and guides you away from poor choices early on. For example, picking a sub-machine gun as my opening weapon, the game threw up a handy dialogue reminding me that this class of gun required a different set of stats from the ones I’d picked to be effective.

It also helps that all the options include all the tropes you’d expect including metrics for stealth, combat, medicine, engineering, dialogue and survival. The only difference being that they have weird names, such as “kissass” referring to the diplomacy skill that can be used to resolve potentially hostile encounters peacefully. 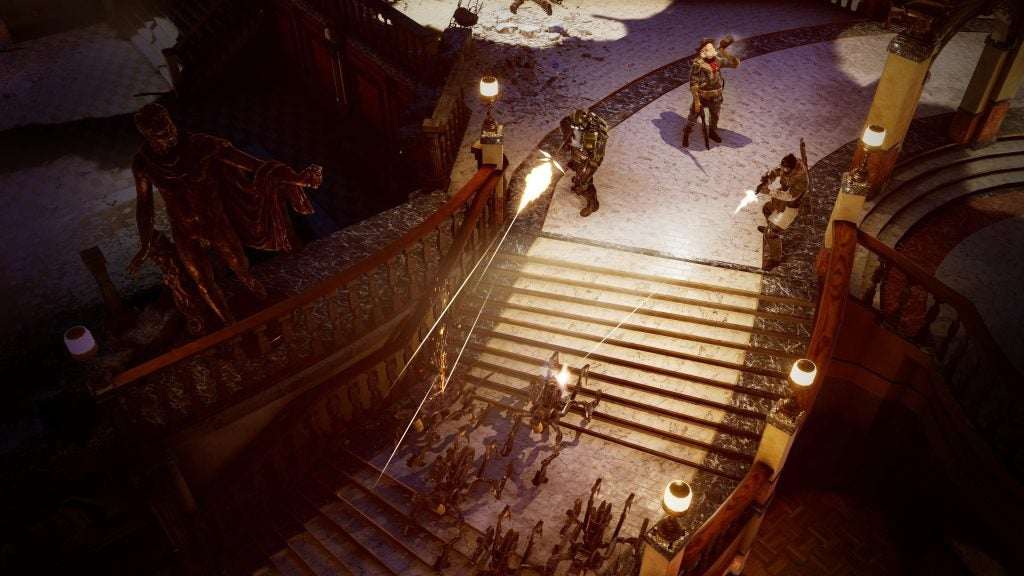 From there, things move fairly quickly to get you into familiar Wasteland territory. After fighting through a quick opening scripted section you’ll be dropped into an abandoned base, which you need to rebuild and set up as the Rangers’ new command centre in Colorado. It then gives you the keys to a giant armoured truck, a smidgeon of opening secondary and primary missions and sets you off on your merry way to explore the frozen nuclear wastes of Colorado.

This sounds basic, but the game’s tone, solid combat and dialogue mechanics do a good enough job to keep you entertained. The world offers a wonderful amount of variety and some genuinely challenging decisions. It’s split into settlement hubs that you can explore as a squad, and a larger main world map using a giant, customisable army SUV.

Quests on offer work well enough especially as the cast of characters is as diverse and entertaining as you’d expect from a title with Wasteland’s historic pedigree.

One second you’ll be exploring the Patriarch’s capital – a dystopian paradise split into two sections, one held by the uber rich “100 families” and the second a slum full of destitute refugees and mafia-style gangsters eager to take advantage of them. The next you’ll be fighting Mad Max-style raiders or attempting diplomacy with a cult dedicated to former US President Reagan. 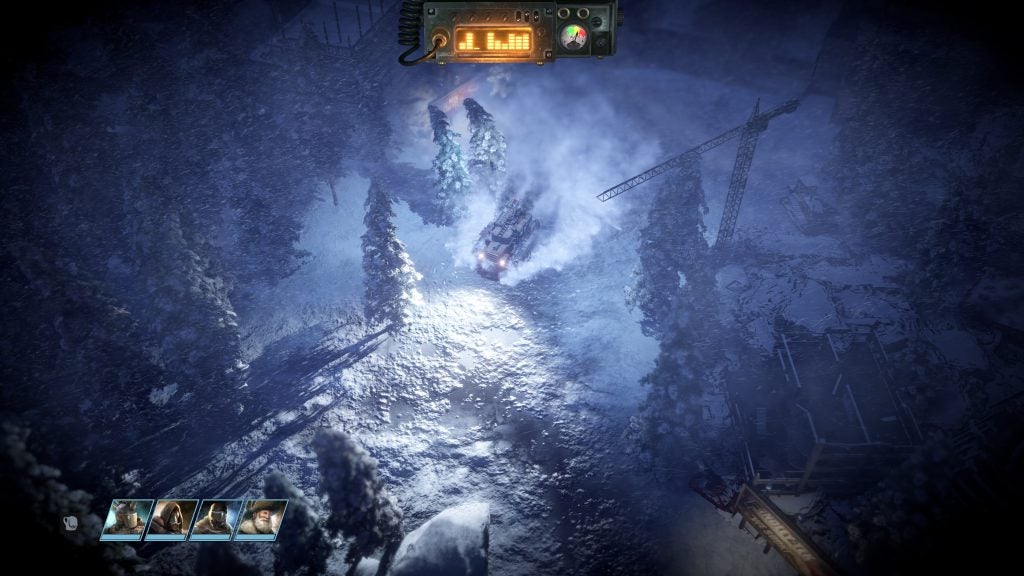 The latter is a particularly important mechanic as the game’s factions are all interconnected and, like most modern RPGs, how you act and who you help will affect how each interacts with you. Annoy one too much and they’ll turn hostile and shoot you on site, or refuse to offer you any aid, closing off potential quest lines and plot options. This mechanic is put front and centre in both the game’s dialogue, base building and mission mechanics.

For example, while exploring the world the game will often throw up curve balls that put you in between a rock and a hard place. During my first venture into the wastes I was given a choice; abandon a family I was attempting to save from raiders to help one of the Patriarch’s trade convoys, or risk losing my good reputation with his faction by plowing on with my original goal.

Decisions you make are doubly important as the staff you pick to man your homebase and NPCs you recruit to your party all have backstories and their own allegiances. Anger one faction too much and you risk losing your bases’ quartermaster, leaving you unable to buy or mod weapons there, or have your favourite sniper quit the Rangers out of frustration for your choices, leaving your squad a person short.

Combat and character development mechanics also do a reasonable job keeping you entertained early on. The combat works exactly like most previous Wasteland games’. At the start of an encounter each character has a certain number of action points they can use to move, enact skills, use items or fire their weapon. 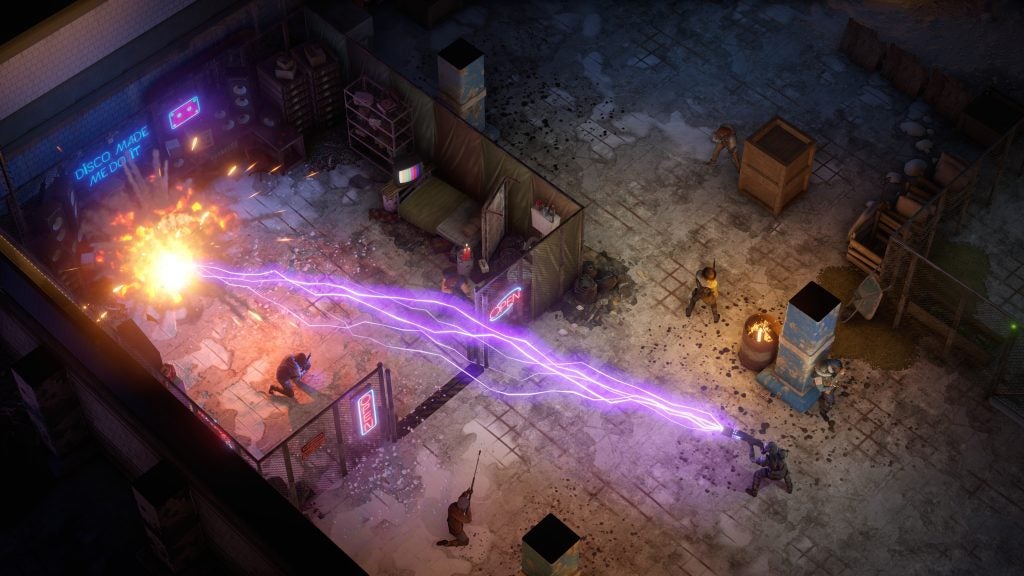 The pecking order of who moves first and how many action points they have is determined by their stats and gear. From there you and your enemies take turns duking it out until one side is dead. As ever making effective use of cover, the environment around you and the game’s overwatch (Ambush) mechanics are super important when playing at higher difficulty levels.

Weapons on offer include everything from basic assault rifles, pistols and shotguns to over the top sci-fi lasers and rocket launchers, each with their own mechanics and stats. Firing them feels suitably weighty and the over-the-top death animations of some enemies is more than enough of a reason to keep blasting away early on.

There’s also decent modding mechanics, similar to XCOM or Gears Tactics’, that let you load your favourite weapons with things like custom barrels, ammunition, sights and grips, making them truly feel like your own.

Character development is similarly fun, albeit a little too familiar. Each level you get to upgrade one of your characters’ core attributes using skill points. From there you can upgrade a core skill. The skill points not only make them more effective at certain actions, they also open up specific development trees that let you earn new combat abilities. 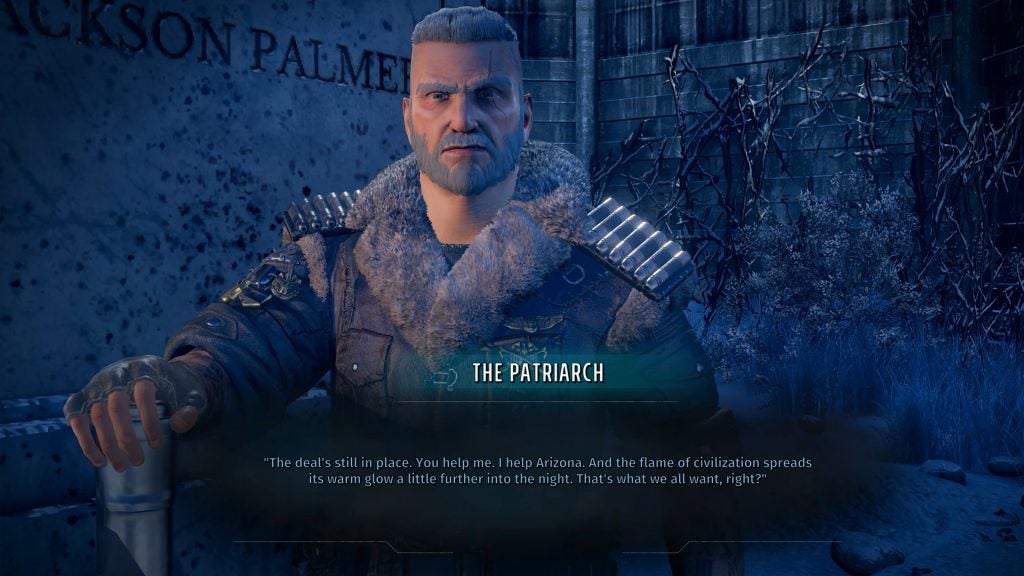 For example, levelling up the “nerd stuff” specialisation will open up a skill tree to let you hack robots or knock turrets offline mid-fight. Developing leadership will let you activate abilities that boost squad members stats or let them start turns with more action points.

Customisation options feel suitably varied and familiar to keep things fun and intuitive throughout the start of the game. But they also highlight the one big flaw with Wasteland 3 – it all feels a little too familiar.

Wasteland 3 is a fun game, and the story hits all the right notes. But the fact is, any established tactical RPG player will have heard them before. The gameplay is fun, but all the new additions to the franchise have already been done, sometimes to better effect, by competing titles.

The multiplayer element is gloriously fun, with Wasteland’s making it all too easy for a less scrupulous player to screw over his teammate in glorious fashion through clandestine private conversations with the game’s NPCs. But, Divinity beat it to the punch on multiplayer many moons ago. 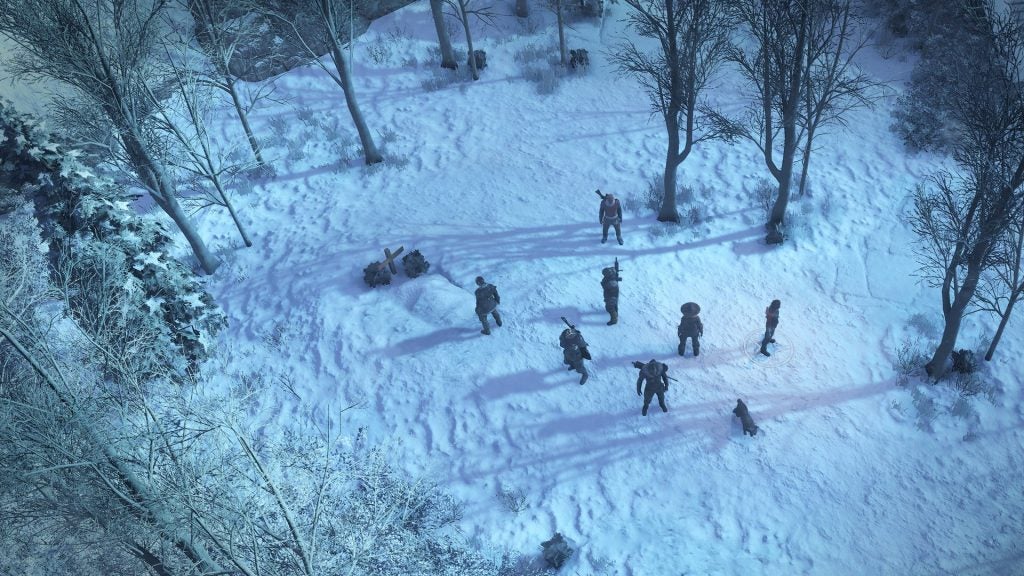 An unpleasant scene where you listen to a client’s first “session” with a goat prostitute is a particularly cringe-worthy experience. With Fallout already doing the hammy humour more and more I can’t help but think Wasteland could have differentiated itself by going a little higher, like Pillars did with its fantasy setting.

These small things don’t stop Wasteland 3 being a fantastic game any fan of tactical RPGs will enjoy, they just stop it standing tall as a pinnacle of the genre the same way past entries into the franchise did. Which is a shame, given how well it does the basics.

If you’re a fan of tactical RPGs then you’ll love Wasteland 3. It ticks all the right boxes and notes expected of a modern isometric, turn-based roleplaying game and wraps them up in a solid and thoughtful nuclear apocalypse setting. The only downside is that it doesn’t do a terrible amount to bring the genre forward, meaning it can feel a little too familiar on occasion.