Wargroove is a solid update of a classic strategy series, and despite some difficulty and user interface issues, will keep hardcore strategy fans amused.

After the assassination of her father and an all out assault on her kingdom, Mercia is having a pretty bad week. This is the jumping in point for Wargroove, showing the newly crowned queen of the realm trying to overcome a desperate situation with the help of her long-term trainer and her sometimes-pet dog, sometimes-battle ally Caesar.

That’s about as much exposition as Wargroove ever offers. From here, there’s cheery dialogue and a series of comedic misunderstandings that could be easily cleaned up with a simple conversation, but instead take the form of long-winded battles.

At first glance, Wargroove apes Intelligent Systems’ classic strategy franchise Advance Wars. It’s not shy about it, and it’s visible in every chunky brightly coloured sprite, every breezy line of dialogue and even the identical way the characters approach each other for combat, crossing the diagonal swish in the middle of the screen to dish out pain. 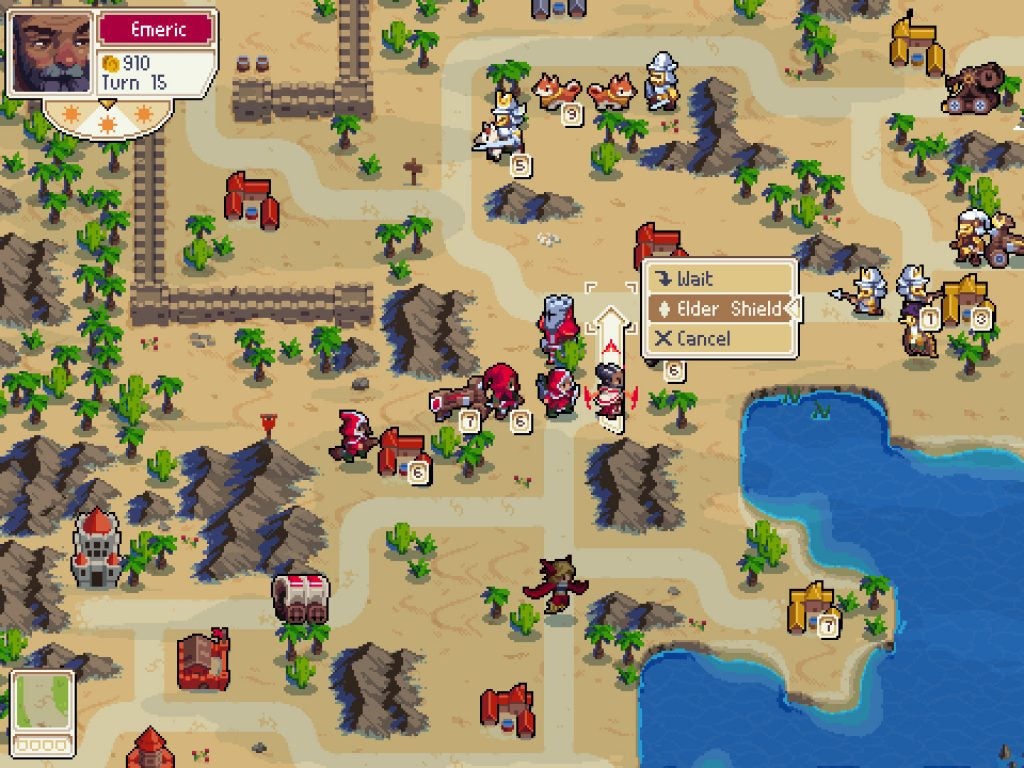 Numbers next to sprites indicate unit strength, which is crucial for lining up attacks on weakened enemy flanks.

Both the best compliment and most damning condemnation of Wargroove is that, ultimately, it’s no more than a medieval fantasy spin on Advance Wars.

This is what developers Chucklefish set out to do with Wargroove, and they have achieved this lofty ambition. Wargroove is a stripped back and engaging strategy game that does a good job of abstracting the chaos of warfare into a cutesy palatable form. Never has a colossal dragon blowing down the door of a fortress with a gout of flame been so family friendly.

Several of the design choices here are smart ones, too. Smaller ones like capturing buildings in one turn instead of two, or paying gold to reinforce troops, are elegant but not huge game changers. Meanwhile, each character has a special ‘groove’ move which can be unleashed with powerful effect. This could involve planting trees that only allied units can pass to block off a route, or, in the case of Caesar the commander dog, inspiring units nearby to immediately take another turn to let you push deep on an attack. When your characters get into their ‘groove’, they can be tremendously useful, but also it gives you access to some more tactical depth, which the game otherwise misses moment to moment. 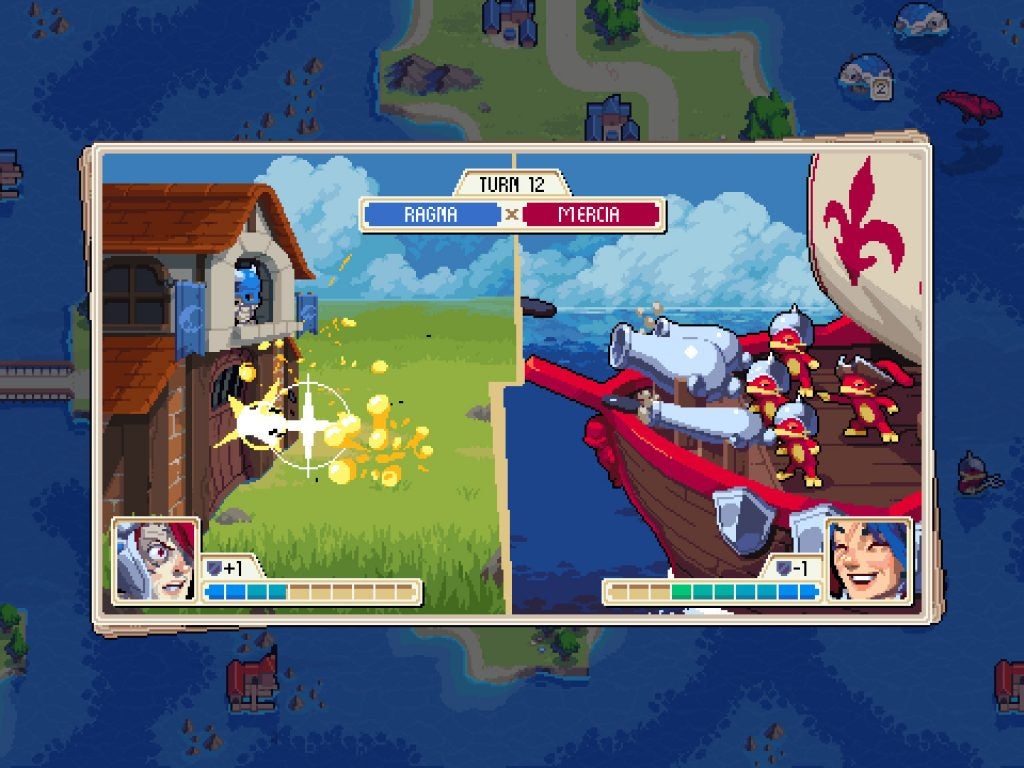 Just like in Advance Wars, Wargroove’s cutesy characters chuckle cheerfully when they dish out the pain.

However, my favourite change, critical hits, go a long way to fight back these problems. Critical hits are special states that a character can be in that causes their attacks to do extra damage. A knight, a powerful cavalry unit for pushing into enemy ranks, will do critical damage after moving six squares in a turn. Meanwhile, pikemen can form up shoulder to shoulder, dishing out critical damage as long as they’re standing next to a similarly-armed pal.

Every unit has its own critical state and the conditions to trigger it mean that for players looking to put a little thought into unit positioning, it could reap rewards.

This way of thinking becomes essential, because as soon as the campaign stops offering up sage advice and hints at key points, Wargroove becomes crushingly difficult, especially with no in-mission checkpoints to offer a salve after you fail a 30-minute long defence mission due to a misclick.

The missions, largely, can feel like fights of attrition because you’re playing an economy game. Capturing houses gives you cash every turn, and you’ll slowly try to rob the enemy of their structures while keeping your own reserves high so you can slowly choke out their forces via superior numbers. This might sound difficult, but it means tiny bits of heroism come thick and fast as you push through small enemy lines or use a hulking trebuchet to snipe out occupied buildings. 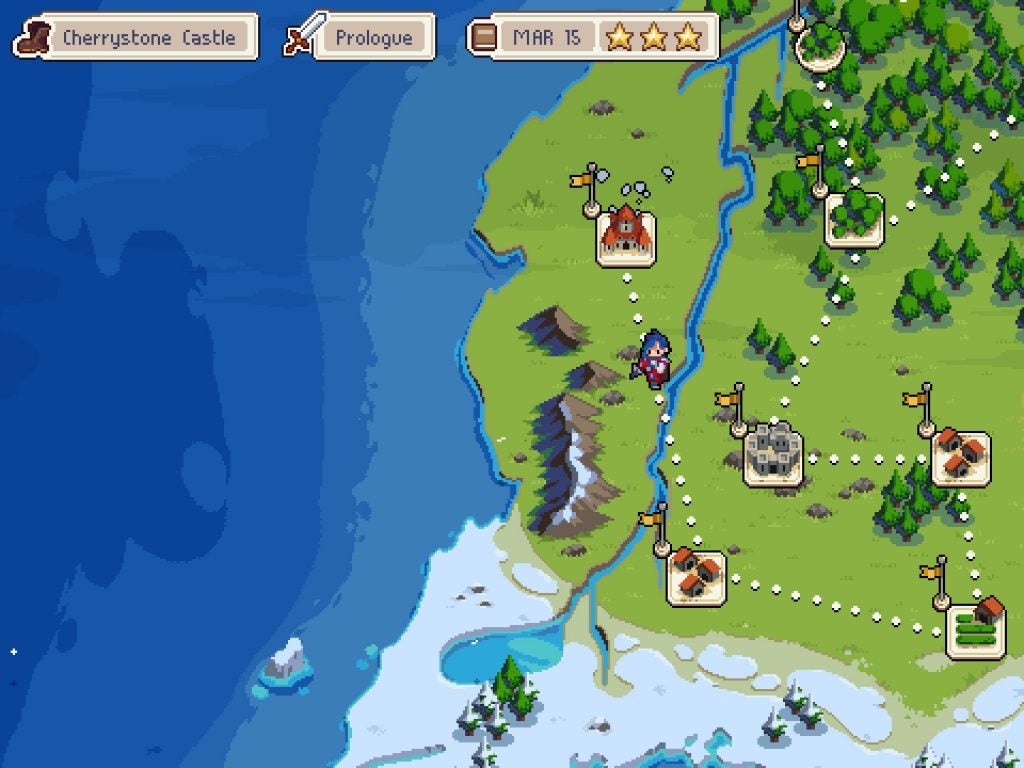 Wargroove’s campaign map in all its retro majesty.

And misclicks will happen. In fact, the user interface in general leaves a little to be desired. It’s surprisingly easy while trying to interact with your troops to accidentally end up skipping your turn, on the Switch edition, at least. This ended up with me failing a fairly punishing mission after I accidentally skipped my entire turn while things were on a knife edge, leading to my commander getting bundled. This wasn’t as much of an issue on the PC, but that one small menu issue constantly tossed a spanner in the works on the Nintendo version.

There’s a wealth of content across the board here, with the extensive campaign, an arcade mode which lets you play as any commander for a series of battles, and some very light story-work. Then there’s the multiplayer, which I played without problems with another Switch player, although PC and Xbox One crossplay is also a feature. If that doesn’t work for you, you can also create your own campaigns for people to take a swing at, including dialogue editing.

It’s a brilliant wedge of content, and a great option for people sorely missing Intelligent Systems’ brand of cut back strategy, but it’s hard to come up with a reason to firmly recommend this if you haven’t played the original. 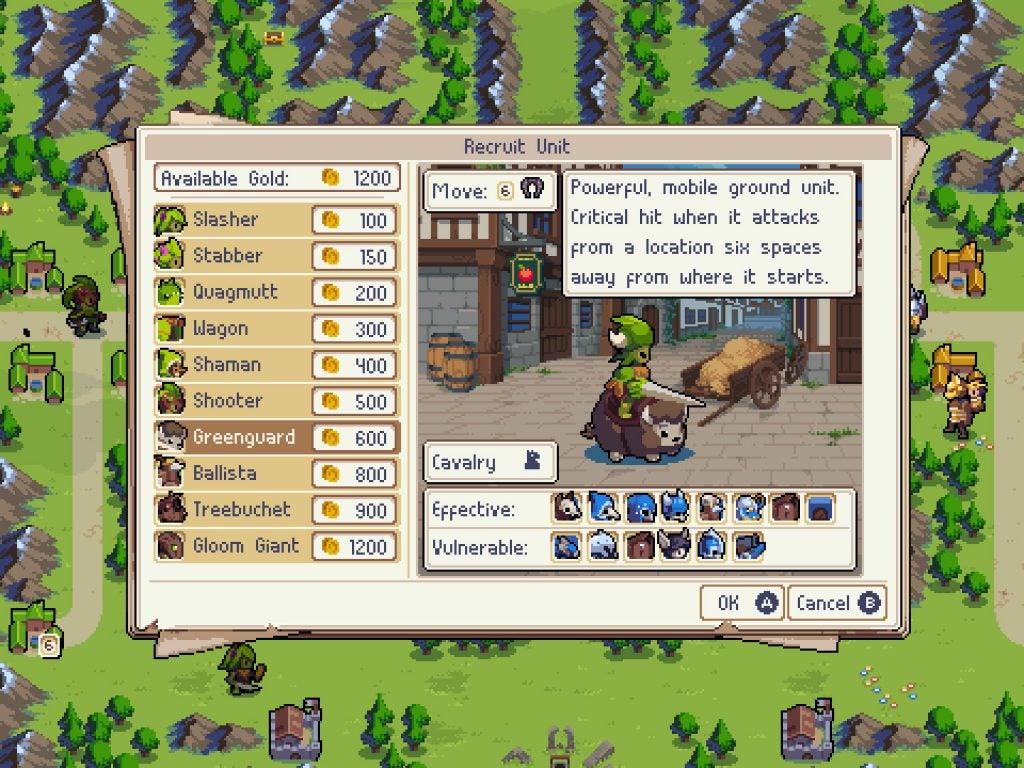 Figuring out the conditions for unleashing your troops’ critical hits – and what they’re vulnerable to – is essential for success in Wargroove.

I there are a lot of dogs, I suppose. Four legged friends are a big part of the arrangement here, with fluffy armoured dogs of war being your best scouts and some of your most mobile infantry. If I were a cynic, I’d suggest this addition of cute dogs is to capture the social media generation. This is perhaps confirmed by the fact that dogs never actually die in the game. When they run out of health they merely scarper instead of perishing.

They’re definitely cute, but it feels like they’re targeted specifically to make me think they’re cute, which makes me roll my eyes a bit. But also, they’re real good dogs. Whatever else Wargroove has going on, there’s no denying that that the art and animation gives every unit great characterisation.

Wargroove is a faithful update of a classic strategy series and, despite some smart additions, never really achieves more than that. The competence is commendable, and this is a solid game that will keep strategy fans amused for a while.

Unfortunately, the final third of the campaign suffers from huge difficulty issues, which are exacerbated by UI and UX problems. Broadly, I like Wargroove, but without the rosy tinge of nostalgia it’s hard to see why you would those desperate for cut-back strategy wouldn’t just opt for Into The Breach, instead.