The original Vodafone Smart cost just £60 but had a few quirky features that helped it stand out from the pack. For example, you could buy additional back plates that had been customised with your own images and text. That said, we weren’t hugely impressed by it when we reviewed it in June 2011. Now Vodafone is back for a second try with the Smart II and, as you’d expect, the spec has been beefed up a bit. However, Vodafone has ditched the idea of the customised back plates and also upped the price by a tenner. There’s plenty of competition at the budget end of the Android smartphone market at the moment, so just how well does the Smart II stack up against rivals like the Huawei G300 and Orange San Francisco II? 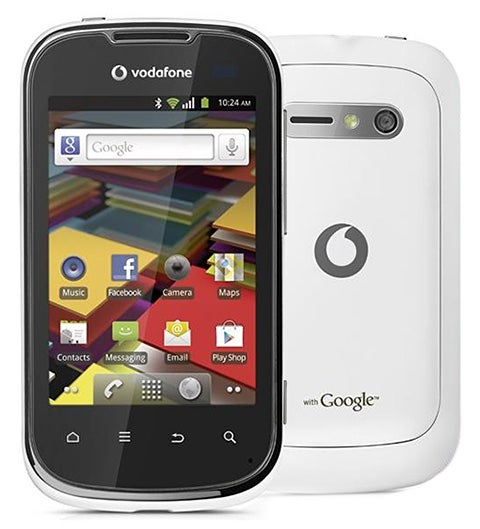 First impressions aren’t all that inspiring. Whereas some other recent budget Android phones have managed to look more expensive than their price would suggest, the Smart II feels, well, cheap. Apart from a small lip on the back of the phone that helps to anchor it in your hand when you’re holding it, the rest of the phone’s design is quite boring and the finish looks pretty plasticky. That said, it does actually feel fairly solid and its small size makes it look rather cute. Weirdly the rear of the phone is actually split into two parts. There’s a sort of removable shoulder area that hugs all four sides of the phone and inside this sits a secondary clip in battery cover. It’s not clear why the designers have gone down this route, but perhaps it harks back to the customisable covers of the original handset. 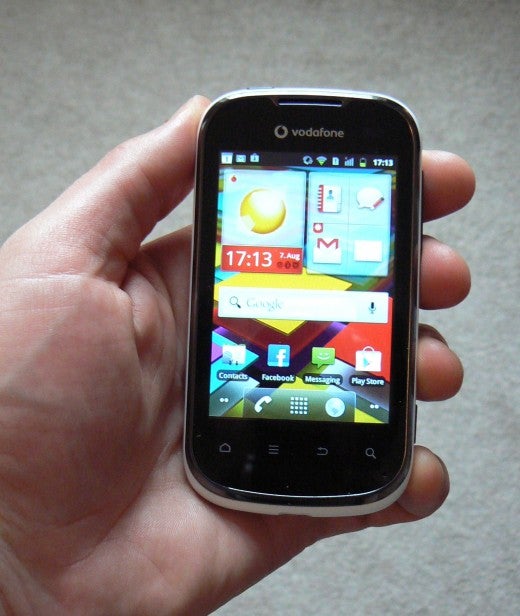 We like the fact that the Smart II has a dedicated hardware camera button, and this is joined by a volume rocker switch on the left hand side and a power/lock button at the top. The latter is actually a bit fiddly as it doesn’t have enough travel. As a result you often have to press it a couple of times to wake the phone from standby. Beneath the screen there’s the usual four Android touch buttons for home, menu, back and search functions, while the microUSB port is positioned on the bottom and the headphone jack at the top of the phone, which is just where they should be in our humble opinion. The Smart II does have a removable battery, but annoyingly the microSD card slot has been placed beneath this so you have to power down the phone to swap SD cards. 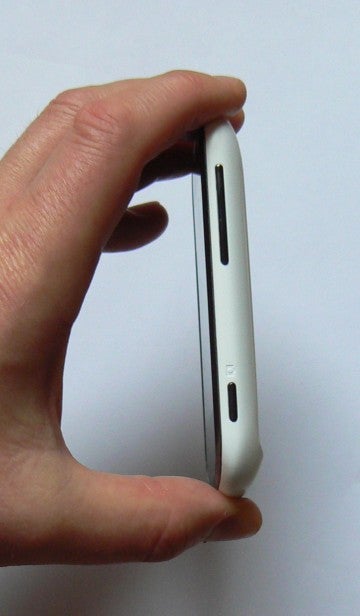 Screens on smartphones seem to be getting ever bigger – a trend that we’re also seeing on budget Android models such as the 4.0inch touting Huawei G300. However, Vodafone has stuck to a much smaller 3.2inch display on this model. It’s resolution of 320×480 pixels puts it ahead of rivals like the similarly priced LG Optimus L3, but it’s still a long way behind the excellent display of the Huawei G300. The screen is a little bit better to use than the Optimus L3 when it comes to browsing, simply because the pixel density is higher so you don’t have to do quite as much zooming to get text to a readable size. However, it’s still far from ideal and text and icons still tend to look a tad blocky. Its small size makes the onscreen keyboard tricky to use and colours tend to look a bit washed out. The screen’s lack of brightness can make it difficult to read outdoors in direct sunlight, too. On the plus side it does feel very responsive to touch — something that’s not always the case on budget phones.

As you would expect on a budget handset, the Vodafone Smart II uses a single-core chip rather than the dual- or quad-core power houses found on the latest mid and high-end Android handsets. The chip runs at a fairly modest 832Mhz and is twinned with 512MB of Ram.

The Smart II also has around 150Mb of storage space for apps with about 125Mb of this available for your own apps. This isn’t a huge amount of space, so you’re likely to use it up pretty fast. Vodafone has included a 2GB microSD card as part of the package and you can move some app data onto this, but not all. The phone accepts cards of up to 32GB in size, so at least you will be able to use larger cards for storing lots of music, photo and video files, if you want. 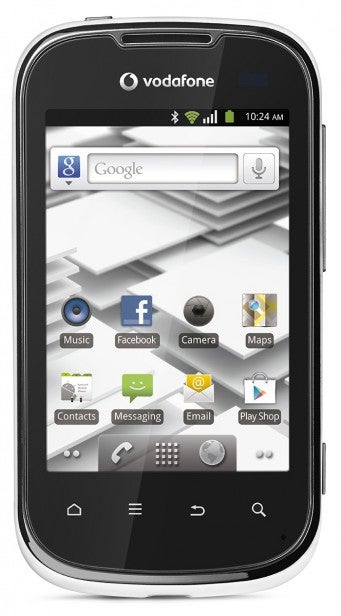 When it comes to the OS, this model runs Android v2.3, also known as Gingerbread, and thankfully Vodafone hasn’t messed around with it too much, so essentially what you get is the normal, plain vanilla Android interface with a few added Vodafone widgets. These include a handy Weather and Time widget along with one that shows notifications for new mail, SMS and Gmail messages.

Overall performance is a little bit lacking though. The browser can be sluggish to render pages – probably due to a combination of its slower processor and lack of Ram – and you’ll experience slow downs and pauses on a relatively frequent basis. This was born out in our benchmark test. In BroswerMark it scored a lowly 18184, while in SunSpider it managed to post a result of just 12129ms. Its LinPack result of 8.17 seconds on the single thread run shows that its processor is no speed demon. It  struggles a bit for 3D gaming performance too and unfortunately refused to run the Egyptian test in the GL Benchmark. 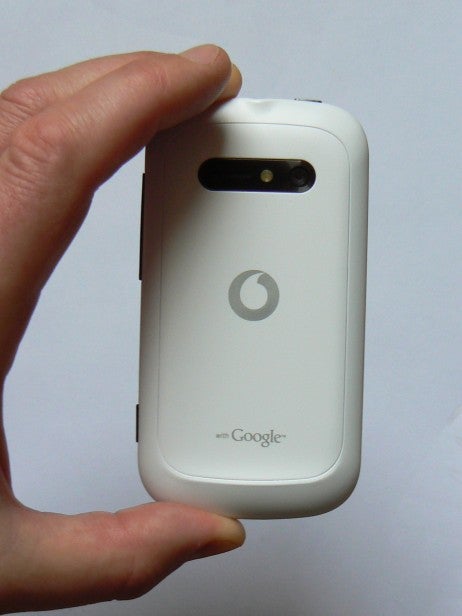 The phone’s camera is merely passable in terms of the shots it produces. It really needs ideal lighting conditions to produce good shots, so if you’re outdoors on a sunny day your photos will be honky dory, although lacking a fair bit of crispness, but if it’s overcast, or you’re trying to take photos indoors, you’ll find the results tend to look very grainy and noisy. There is an LED Flash to help out in low light conditions, but it’s not really strong enough to be effective and its overly blue-ish hue makes the resulting photos look quite cold. The video mode isn’t great either. It can capture video at a maximum resolution of 640 x 480 pixels, but the quality is poor with things becoming very pixelated when there’s even a modest amount of movement in the frame. 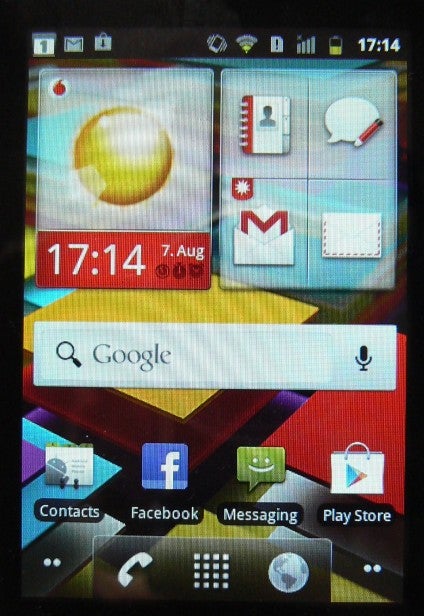 Unfortunately battery life isn’t one of this handset’s strong points. Vodafone has used a fairly small 1,200mAh battery, but despite the fact that the phone has a smaller screen and modest processor, it doesn’t seem quite sufficient as the phone struggled to get through a days usage without needing a top up of juice in the evening.  Call quality was on the whole pretty good, though, with both the mic and earpiece delivering crisp and clean audio.

Verdict
The Smart II has ended up stranded ion something of an Android no-man’s land. It’s not cheap enough and doesn’t have good enough battery life to compete right at the bottom end of the Android market but also lacks the features and screen quality to make it worth considering over slightly more expensive options such as the Orange San Francisco II and Huawei G300.  Our advice would be to save up a few more pennies and opt for either of those two models instead, especially as the latter is also available on Vodafone. 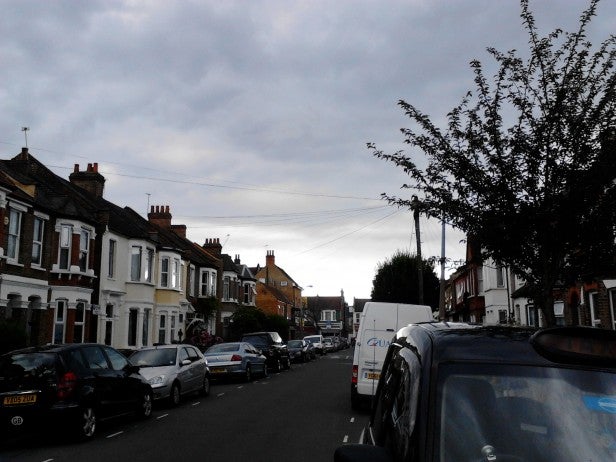 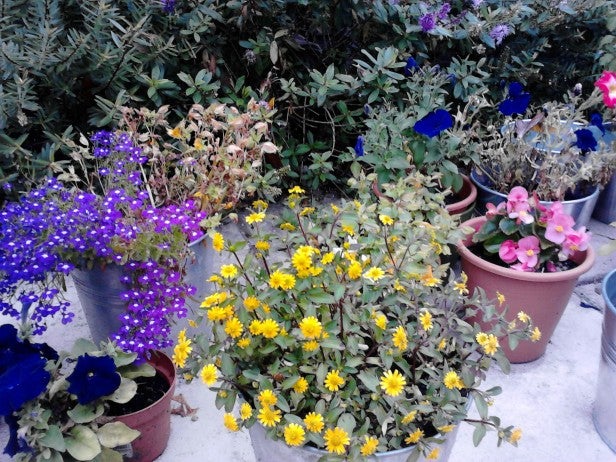 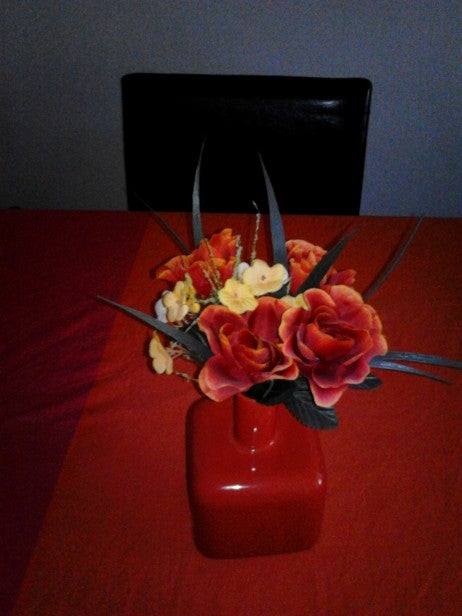