Available for £70 on Pay as you go, the Optimus L3 E400 is by far the cheapest phone in LG’s current line up of Optimus Android handsets. A year ago this price point would have seemed astonishing, but price erosion on entry level Android handset has been shocking and recently Alcatel told us it’s going to soon launch its Alcatel OT-903 phone for just £40 on PAYG, which almost makes the L3’s asking price seem mid-range by comparison. But we digress, the real question is whether the L3 is actually worth £70 of your hard earned cash. 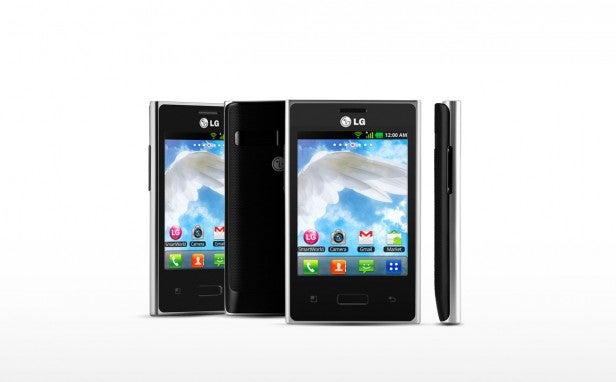 The L3 may be a budget model, but thankfully its design doesn’t look low rent. It feels reasonably solid and the combination of the smoky chrome and glossy black used on the front helps it avoid the cheap and nasty look of a lot of low priced Android devices. That said, the screen does appear somewhat awkwardly placed, as it sits between two big expanses of glossy black at the top and bottom — something that makes the phone’s styling look a touch unbalanced when viewed from the front. 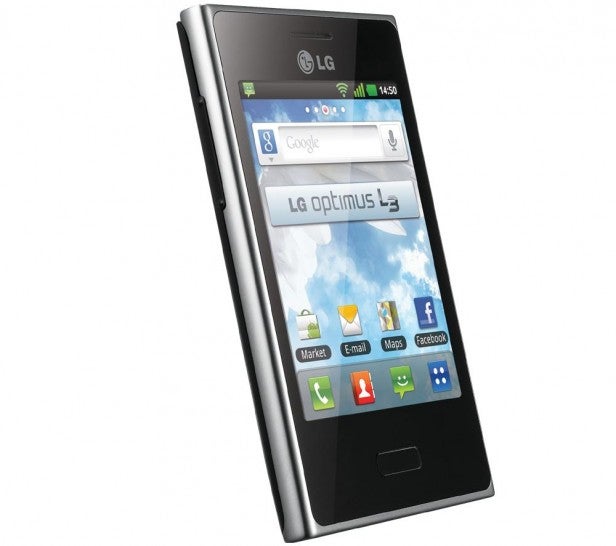 The plastic battery cover on the rear has a slightly strange textured surface that feels a little like corrugated cardboard. This actually looks and feels better than it sounds, especially as it’s quite grippy. However, the texture does make the rear of the phone hard to keep clean as dust tends to gather within the pits on the surface. The battery cover is easily removed by pulling on a slight indent at the top and once it’s off you can access the microSD card slot on the left hand side without having to remove the battery. There are only two ports on the L3 — the standard headphone jack on the top and the micro USB socket at the bottom. There are physical buttons for the volume controls on the left hand side, as well as a power/lock button at the top and a home button beneath the screen. The home button is flanked by two touch buttons for the menu and back keys and these light up once the screen is on, but blend seamlessly into the black bezel when the display’s off. 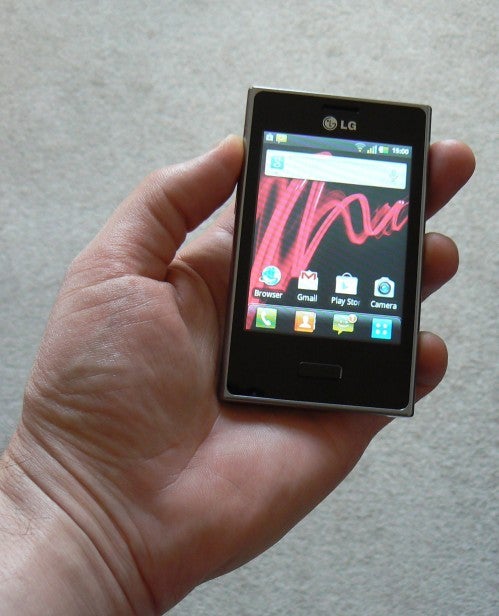 Perhaps unsurprisingly the L3 doesn’t run the latest version of Android, but instead uses V2.3.6 – also known as Gingerbread. However, LG has added its own skin over the top of this, which it calls Optimus UI 2.0 Lite. As the name suggests this is a cut down version of the skin used on LG’s pricier L5 and L7 handsets and lacks most of the graphical effects that are the signature of the full version. Nevertheless, it does have a slide up screen to unlock the handset and in the app drawer you can sort apps into different sub sections that you can quickly access via simple headers. There are also music playback controls permanently docked in the notification pull down tab, but other than that it’s not much different to plain vanilla Android. You may think that’s no bad thing, as it saves the phone from being weighed down by bloatware, but it also makes us wonder why LG bothered putting the Optimus UI on the phone at all.

The LG Optimus L3 E400 is built around a single core Qualcomm Snapdragon 800Mhz processor, which has around 300MB of Ram at its disposal. There’s only 1GB of storage space onboard for apps and the like, but you can beef this up by adding cheap microSD cards of up to 32GB in size. Despite the processor’s modest specs the L3 is actually fairly quick to use by budget phone standards. Apps are speedy to load and it’s even pretty fast at rendering web pages. In the Sunspider browser test it posted a score of 4387, which is fairly quick for an entry level phone. It played a standard definition Xvid video file via the built-in video player without any problems and the Netflix app we downloaded worked smoothly too. However, the BBC iPlayer app sadly isn’t compatible with the phone. On the graphics front it’s capable of producing a decent frame rate in 3D games, posting a score of 21fps in the GLBenchmark 2.1 Egypt Standard test. This compares well against the more expensive Huawei Ascend G300, which scores about 19fps in the same test, although it’s not a direct comparison as the G300 is working at a higher resolution of 480×800 pixels. 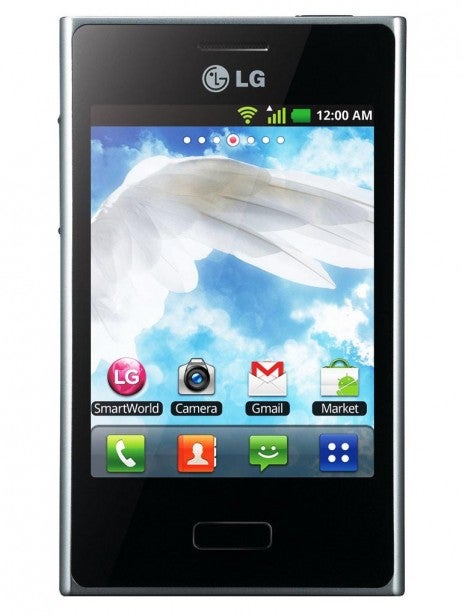 Undoubtedly the most disappointing aspect of the L3 is its screen. Its size isn’t too bad at 3.2inches, but it’s the low resolution that’s the killer issue. The resolution only stretches to
320×240 pixels. The result is that icons and text looks quite blurry and indistinct, especially around their edges. It also means you have to do an awful lot of scrolling and zooming when you’re reading webpages, which quickly becomes frustrating. Colours look a bit dark and murky too, and its viewing angles aren’t great either. In fact, overall, it’s one of the poorer screens we’ve seen on a budget phone for quite a while.

Unfortunately the camera isn’t much better. It’s a 3.0megapxiel shooter, but it suffers from a lot of shutter lag when it’s taking photos. It also lacks a flash to help it out when it’s working in low light, so you’ll be lucky to be able to make out much detail at all in pictures that have been taken in dimly lit rooms. Working outdoors its performance is a bit better, but shots still look a tad smudgy and colours can be a little wayward. Cameras on budget phones are never great, but we’ve still used ones on cheap phones that gave better results than what you get from this one. 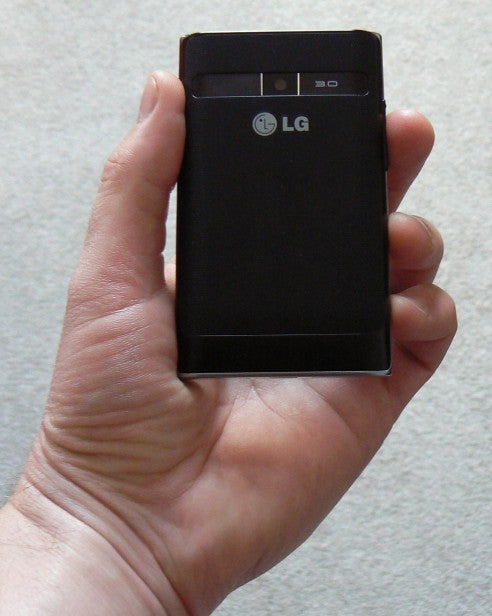 The phone relies on a 1540 mAh battery for its power. This is quite a large capacity battery for such a small phone and this, combined with the smallish screen and modest processor actually help it to put in a pretty good performance in terms of overall battery life. We found we could squeeze a day and a half to two days out of it before it needed a recharge, which is good compared to most similarly priced competitors. Call quality was also a cut above the norm. The earpiece was reasonably loud and delivered good quality speech.

Verdict
The Optimus L3 has its plus points – it’s got good battery life and feels quite speedy to use for such a modestly priced handset. However, it’s let down badly by its poor quality and low resolution screen, which really does significantly hamper its usability. We’d recommend you spend a bit more to get an Android phone with a larger and higher resolution screen, such as the excellent Orange San Francisco II or Huawei Ascend G300.