Introduction
We’re not sure if it’s just our age, but for some reason whenever we hear the word ‘laser’ we feel a rush of childish excitement. Maybe it’s those games of LaserQuest with our school mates, or maybe it’s the those amazing laser effects at the posh fireworks shows we used to go to at Alton Towers. Whatever the reason for our curious laser obsession, it apparently still holds good today as we take receipt of the new ViewSonic Pro9000: the first specialist home theatre projector we’ve tested that uses Laser Hybrid LED technology.

The advantages of using a laser to illuminate the pictures of the £1,600 ViewSonic Pro9000 rather than a traditional lamp are five-fold, so far as we can tell. From a picture quality point of view, probably the chief advantage is that there’s no need to use a colour wheel – a fact which should result in the end of single-chip DLP’s rainbow noise and motion fizzing problems. 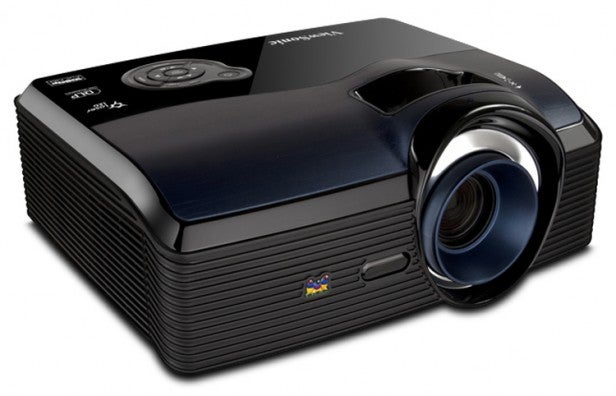 On top of this there are the practical benefits of laser lighting. For instance, ViewSonic claims a 20,000-hour lifetime for its solid-state lasers – between five and 10 times as long as you’ll get from a typical projection lamp. With replacement lamps for normal projectors costing £150 and beyond, the ViewSonic Pro9000 could thus present heavy users with a considerable long-term saving – a fact which makes the £1,600 price look a little more potentially reasonable than it was already for a projector using ground-breaking tech.

ViewSonic also contends that the Pro9000 doesn’t need to use fans to keep the lighting system cool. You can thus unplug the projector as soon as you’ve switched it off rather than having to wait for the lamp to cool down. Plus, of course, no fans means no fan noise. Or it would do if the ViewSonic Pro9000 sadly didn’t require a (thankfully not too noisy) fan to prevent other parts of the projector’s innards from overheating.

At this point we should quickly explain how laser LED technology – used in conjunction with a DLP optical system – actually works. It essentially employs a combination of blue and red LEDs, blue lasers and green phosphors, with the blue laser passing through a clear segment to excite green phosphors on the other side. The primary light colours are then consolidated, before being reflected from a typical DLP’s digital mirror device (DMD) into the lens. 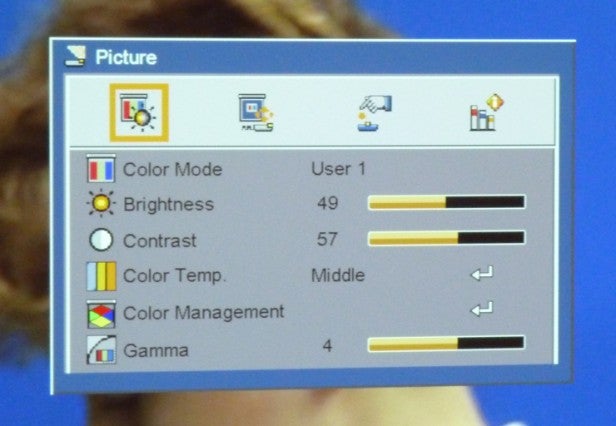 If you’re wondering why this approach can deliver an enhanced colour gamut, the main reason is the way it allows for an enriched delivery of the green primary colour. Green is responsible for around 60 per cent of colour composition, yet conventional lamp technologies struggle to recreate this green dominance effectively, leading to pictures that can look either too red/warm or too blue/cool. Especially at the relatively cheap end of the projection market.

Moving away from the laser system in search of other key features, the ViewSonic Pro9000 is a full HD model that accompanies its 100,000:1 contrast ratio claim with a surprisingly high 1,600 Lumens of claimed peak brightness. This is exciting because the only other laser-based projector we’ve ever seen, the Microvision ShowWX ‘Pico’ model, was let down by a pretty fundamental lack of brightness. Hopefully the ViewSonic Pro9000 will also prove immune to the aggravating speckling problem exhibited by the Microvision effort.

Before we get too excited by the ViewSonic Pro9000’s apparent brightness, though, the spec sheet also only recommends a maximum image size of 150-inches diagonal, while truly bright projectors tend to work comfortably at 200-inches and beyond.

Setting up the ViewSonic Pro9000 is a rather disappointing experience. For starters, there’s no vertical image shifting. While we can tolerate this – just – on sub-£1000 projectors such as the BenQ W1060, not being able to optically move pictures up and down is a real blow on a £1,600 model. After all, it means that the vast majority of people will have to resort to using keystone correction  to get the edges of their pictures straight – and as we’ve pointed out many times before, whenever you use keystone correction you’re essentially distorting the image from its original pixel-mapped state.

We were also saddened to find only a 1.2x optical zoom, making the ViewSonic Pro9000 relatively hard to position correctly in your projection room. 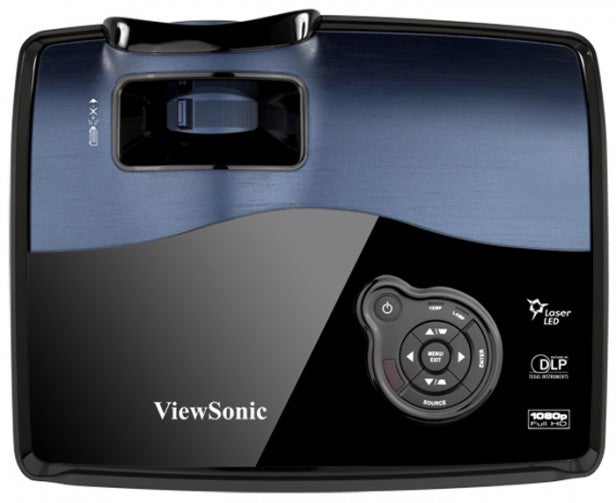 The ViewSonic Pro9000’s remote control is nothing to write home about either. It’s backlit, thankfully, but its layout is cluttered and its finish cheap and plasticky.

On the upside, the ViewSonic Pro9000 connectivity options are decent, with highlights of two v1.3 HDMIs, a D-Sub PC port, and a component video input. The onscreen menus are reasonably appealing too, albeit perhaps a touch smaller than they could be.

Features within these menus are passably plentiful, including the facilities to adjust the red, green and blue gain of the colour temperature; the hue, saturation and gain balance of each of the six main colour elements; and the projector’s fundamental gamma settings.

The ViewSonic Pro9000’s design is best described as… unusual. Its grilled sides and reasonably compact size could belong to any number of other projectors, but its disproportionately large lens and cowling certainly makes it stand out from the crowd, as does the unusual 50-50 split of glossy and ‘brushed’ finish on the projector’s top edge. The slight blue tinge to the brushed section isn’t something you see every day, either.

Overall the ViewSonic Pro9000 design is a bit too busy for our tastes, but you probably won’t be looking at it much anyway once you’ve dimmed the lights and settled down to watch a film. Which is exactly what we’re about to do…

With both Prometheus and our tried and tested Harry Potter and The Deathly Hallows Pt II on Blu-ray, the ViewSonic Pro9000 proves a very interesting watch. Not an entirely satisfactory one, it must be said, but certainly interesting.

The first thing that struck us was just how diverse a range of base colour temperatures the ViewSonic Pro9000 delivers via its Gamma settings. We found ourselves jumping between at least five of the seven provided modes numerous times before eventually settling on number four. And even then we found ourselves tinkering at some length with the projector’s colour management features before we felt we’d nailed the best movie colour performance the projector can deliver.

What we’re getting at here is that the colour range possible from the laser technology really does seem extreme. This is in most ways good news, but it does also mean you have to put in more effort with the ViewSonic Pro9000 than you do with many rival projectors to get colours looking their best.

Once you’ve got over this setup hurdle, though, you grow to greatly appreciate the ViewSonic Pro9000’s colour efforts. It really does deliver not just a range but also a subtlety of tone that’s not hitherto been seen on such an affordable single-chip DLP projector.

This is especially apparent while studying skin tones. Both Prometheus and Harry Potter present real challenges for any video display in this respect, but the ViewSonic Pro9000 reproduces not only the diversity of flesh tones but also every little subtlety within each different facial close-up with impressive colour accuracy.

Another example of the ViewSonic Pro9000’s colour performance in action is the scene where Harry, Hermione and Ron change clothes on a moor after jumping off a dragon (as you do). The projector produces a more tonally rich representation of the grassland backdrop than any affordable projector we’ve seen before.

The ViewSonic Pro9000 also impresses with its motion reproduction. Both camera pans and motion within a frame are handled with aplomb, looking free of judder, blur and the sort of fizzing artefacts you commonly get with normal single-chip/colour wheel DLP projectors. Excellent.

Also very good is the ViewSonic Pro9000’s handling of detail. HD pictures look extremely sharp and polished, yet crucially this sharpness doesn’t look forced or over-cooked. Furthermore, as usual with DLP technology there’s no sense of the grid-like structure of pixels that you can sometimes see with rival-tech projectors. 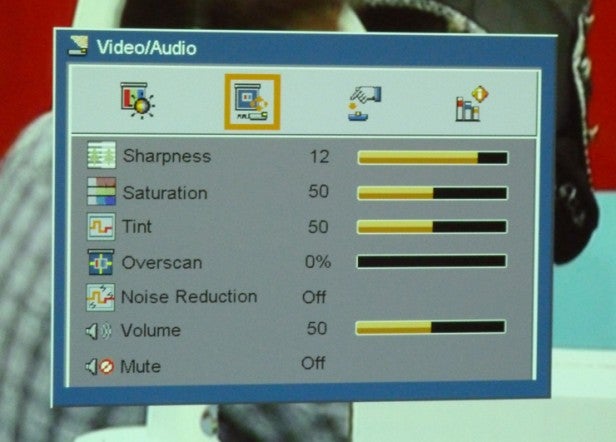 It’s also a great relief to be able to watch a single-chip DLP projection image that, true to ViewSonic’s promise, isn’t troubled at all by the rainbow effect that’s so commonly an irritant with normal UHP lamp/colour wheel models.

In many ways, then, it really isn’t a stretch to describe the ViewSonic Pro9000’s pictures as genuinely filmic, at least at times. However, aside from the aforementioned difficulties in settling on the best colour settings, there are a few other significant flaws to report.

The most disappointing of these concerns the ViewSonic Pro9000’s black level response. Both the films we used predominantly for our tests feature lots of very dark content, and the laser tech struggled to handle this convincingly, despite the 100,000:1 contrast claims and despite the fact that pictures aren’t as bright as we’d hoped they might be from the 1,600 ANSI Lumens brightness claim.

There’s that all-too familiar grey (or bluish or greenish, depending on your gamma choice) wash over parts of the picture that should be black. This leaves dark scenes looking rather flat, low on shadow detail, and just not totally convincing. Especially as the inability to render a true-looking black also damages the projector’s colour capabilities when showing dark shades.

Another problem that’s also at its most noticeable during dark scenes is a sort of greenish speckling noise. This is readily visible over dark and mid tones if you get quite close to your screen, but it’s also visible in a more ‘general’ way as a vague fizzing effect from normal viewing distances.

Our final complaint about the ViewSonic Pro9000 picture quality is that occasionally the very lightest parts of pictures can look ‘flared out’. In other words, a loss of subtle shading in these light areas can leave them looking like empty white holes ripped from the picture.

Given the extreme contrast demands placed on projectors by many of our favourite Blu-rays, the ViewSonic Pro9000’s difficulties handling dark scenes represent a major hurdle to us taking the company’s bold new projector technology to our hearts just yet.

That said, the ViewSonic Pro9000 also gets enough things right in both performance and practical terms to convince us that it’s a technology worth pursuing. File under ‘one to watch’, then…