Introduction
At first glance, the BenQ W1060 projector seems to have arrived at a very unfortunate moment. For this feature-lite DLP model follows hot on the heels of the hugely impressive Panasonic PT-AT6000E projector, and is shortly to be followed in turn by the hugely promising Sony VPL-HW50ES, JVC’s DLA-X35, and the highly tipped Epson TW6100 and Epson EH-TW9100.

However, the reality is that the BenQ W1060 can’t sensibly be measured against those other models, for one simple reason: it only costs £700 – a fraction of the cost of the mid-range maestros we mentioned.

The BenQ W1060 price immediately puts much less of a burden of expectation on the DLP projector, in fact, from past experience with other similarly priced models, we’d suggest that anything better than outright averageness will be good enough to impress us. 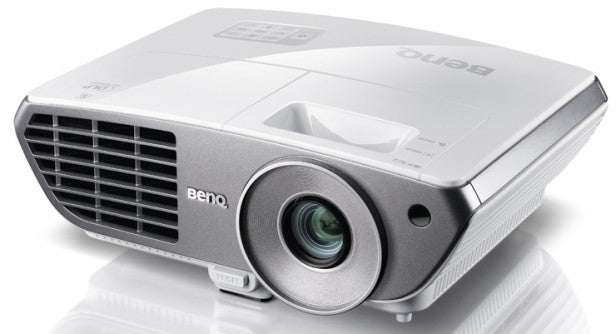 The two most immediately interesting things about the BenQ W1060 beside its price are the company’s claim that it’s definitely created for home cinema use (rather than being a data model masquerading as a movie machine), and its design.

The BenQ W1060 really does look far cuter than most projectors, with steeply angled-out sides, a high-gloss white top, a slick metallic silver font panel, and curves and angles galore. Yet somehow BenQ has made all these elements work harmoniously, delivering a finished look that’s right at home in a typical living room.

The BenQ W1060 spec sheet makes for some interesting reading too. For starters, it’s a full HD model rather than just enjoying the 720p native resolution DLP system we might have expected. It’s also very bright for its price point, claiming 2,000 ANSI Lumens of light output.

On a budget projector this sort of brightness can often actually be a red flag, pointing towards some serious contrast problems. Yet while the 5,000:1 claimed contrast ratio for the BenQ W1060 is hardly earth-shattering, it’s also just about high enough to raise hopes of some at least respectably contrast-rich movie action.

Another interesting number on the BenQ W1060’s spec sheet is an unusually high claimed lamp life of 6,000 hours. This is achieved by using ‘special’ cooling technology that helps prevent the lamp from overheating. Use the projector’s Eco Mode all the time, moreover, and you should get even more lamp life out of the BenQ W1060 – as much as 9.6 years, in fact (based on four hours of use a day for 52 weeks a year).

This is significant because it reduces your total cost of ownership, as you won’t have to replace the lamp as often. You also won’t need to replace or clean the BenQ W1060’s filters, for the simple reason that it doesn’t use any.

The cooling technology found on the BenQ W1060 additionally helps it cool down faster when you switch it off than most high brightness DLP projectors – handy if you want to unplug it quickly to whisk it away in its surprisingly well-designed and included carry case.

The W1060’s use of DLP technology should also mean that its colours hardly decay at all over the projector’s lifetime, avoiding the yellow or green tints that can creep in with LCD projectors over time.

For such a cheap projector, the BenQ W1060 is well connected. Two v1.3 HDMIs will be the most important jacks for most home cinema users, but there’s also a D-Sub input for simple PC connection, as well as a component video input and a Mini B USB input with download and page up/down functionality.

Setting the BenQ W1060 up isn’t a particularly pleasant experience. For starters, it’s got an extremely limited amount of zoom; just 1.20:1 – something that caused us a few positioning headaches during our tests. It also doesn’t enjoy any vertical image shifting, meaning you’ll have to use the provided front and rear legs to try and angle the picture up (or in our case, down) to your screen.

As well as being fiddly, the lack of vertical image shifting means you’ll almost certainly have to use digital keystone correction to get the sides of your image straight. Which isn’t good news, since as soon as you use keystone correction, you’re essentially distorting the image. 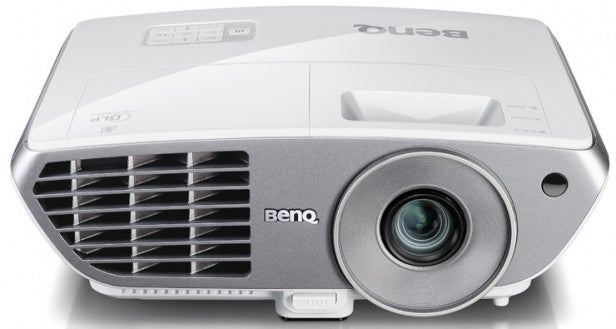 Before we get too upset by this, though, it’s time to remind you of the BenQ W1060’s sub-£700 price. For having limited zoom and no vertical image shifting is the norm at this level of the projector market.

Picking up the bland but backlit and functional remote control to explore the BenQ W1060’s onscreen menus, we discovered more features than we might have expected. Among the most ‘high-brow’ stuff are a flesh tone adjustment; a selection of gamma presets including the video-friendly 2.2 setting; a Clarity Control system that comprises noise reduction, detail enhancement, luma and chroma transmission tweaks; and a colour management system that lets you adjust the hue, saturation and gain of the six main colour elements.

First impressions of the BenQ W1060 in action are surprisingly positive. We first fired the projector up with some of our test room lights still on and were immediately struck by just how watchable the W1060’s images were despite having ambient light to work through. This is mostly down, of course, to the BenQ W1060’s brightness, but it’s not just that. We also felt impressed by how well-saturated and natural colours still looked despite the influence of our spotlights. 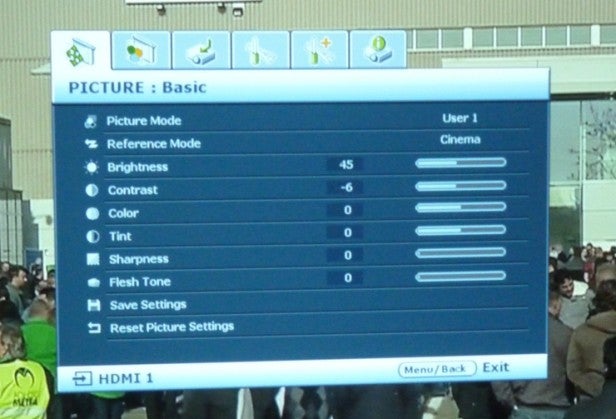 This is important, of course, because there’s more chance that a budget projector will end up being used at least some of the time in a fairly casual environment – as in, one with ambient light – than a much more expensive, ostensibly ‘serious’ projector.

Not surprisingly the brightness and colour punch of the BenQ W1060 pictures become more spectacularly evident with our lights down and black-out blinds in play. In fact, the BenQ W1060’s pictures are a bit too full-on in this room configuration, quickly causing us to head into the onscreen menus to tone things down a bit.

With this done, the BenQ W1060 serves up a rather mixed picture quality bag. Starting with the negatives, the projector’s black level response really isn’t very special at all.

When you’re watching scenes with a strong mixture of bright and dark material the BenQ W1060 projector’s brightness can hide the black level weaknesses to some extent. But whenever a picture is predominantly dark it’s impossible to ignore the distinct grey pall that hangs over everything that should look black.

This lack of black level – although not as bad as on some other mega-cheap projectors we’ve seen – causes a couple of other issues too. Namely some slightly odd-looking colour tones at times, and a fairly severe shortage of shadow detail, which can leave dark scenes looking flat and hollow.

Also troublesome with the lights down is that old DLP problem of the rainbow effect. Bright parts of the picture – especially if they’re surrounded by darkness – can be blighted by fleeting but distinct stripes of red, green and blue over them. The same sort of RGB striping can also be seen if you flit your eyes around the image.

A smaller issue – possibly though not definitely related to the rainbow effect – is that small, bright details of the picture tend to flicker, drawing undue attention to themselves. We also felt that HD pictures maybe didn’t look quite as sharp as we’d ideally like them too. Though at the same time we prefer the gently soft finish of the BenQ W1060’s HD pictures to the over-forensic look some rival projectors prefer.

The W1060’s black level and rainbow effect issues are ultimately difficult for us to see past, given that they commit the cardinal sin of regularly distracting us from the film we’re watching. But to fair to the BenQ W1060, there are some surprising positives to report too.

Motion is better handled than we would have expected too, with precious little judder beyond what feels natural to a film or TV show. There’s also pretty much no sign at all of the fizzing noise caused by the colour wheels of lesser DLP projectors. 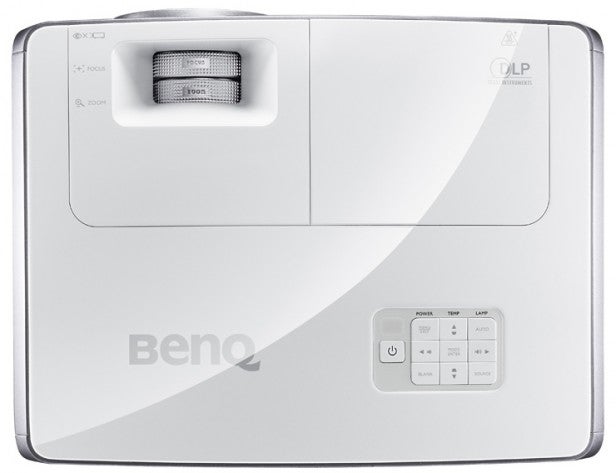 The BenQ W1060 also works decently well as a gaming display, especially if your gaming tends to take place in a fairly ‘social’ environment where achieving total darkness is difficult. And finally we were pleasantly surprised by how quietly the BenQ W1060 runs, especially when you take into account how bright it is.

In the end we’re torn about the BenQ W1060. As a serious movie machine it doesn’t quite pass muster thanks to the distracting impact of its rainbow effect and some wishy washy black levels. But in other areas its pictures have quite a bit more quality and a greater cinematic sensibility than might have been expected at the sub-£700 price point. It’s certainly surprisingly watchable if there’s ambient light in your room.

Probably the best way to sum up our feelings about the BenQ W1060 is to say that while home cinema enthusiasts should probably try and save £300 more to step up to significantly less compromised home cinema machines, if you’re after a fun/casual living room projector that’s better than most similarly priced rivals, the BenQ W1060 is worth a look.