The Microvision SHOWWX is a laser pico projector designed with iPads and iPhones in mind. This second-gen device from Microvision claims to improve brightness by 50 per cent, but is it enough to get rid of the dimness that’s long been associated with pocket pico projectors?

The primary benefit of any pico projector is that it is small and light – and therefore extremely portable. At 122g and just 14mm thick, the Microvision SHOWWX fits the bill. It’s a small black box that slips easily into a coat pocket. 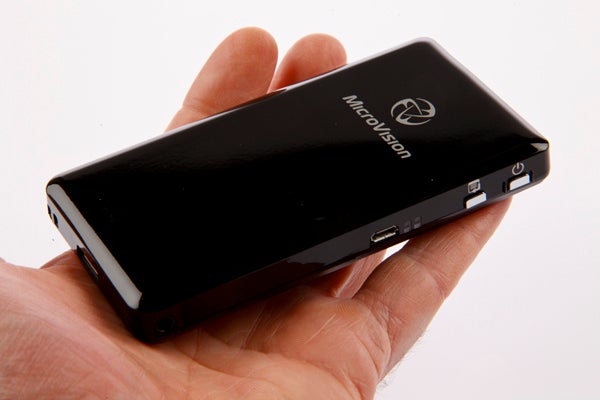 It manages to be so small through the use of lasers. It uses red, green and blue class 2 lasers to make up its image, which according to Microvision can extend to 100in. The idea of a 100in TV in your pocket is an attractive one, isn’t it? There are, of course, plenty of limitations to consider, which we’ll cover later.

All the buttons needed to operate the thing are on its body, and there are just four of the them – up and down, menu/select and the power button. It offers an iPhone-connector socket, a microUSB socket to charge the internal battery, a microHDMI to let you plug into non-Apple gadgets and a 3.5mm audio output. There’s no built-in speaker here, so you’ll have to rely either on the inbuilt speakers of the source – if there are any – or other powered speakers. 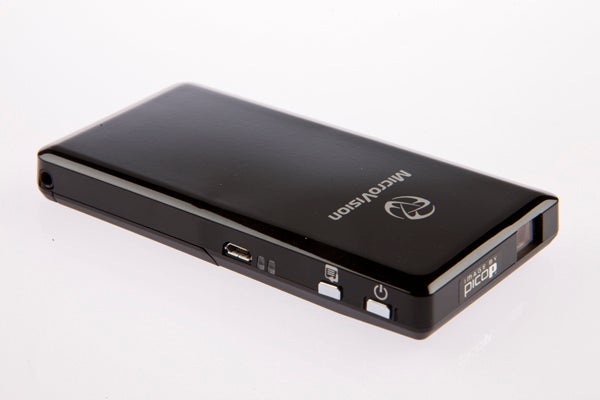 A chunky iPhone cable is included, as areEU/US international plug adaptors and a strap that attaches to the SHOWWX ‘s end. As long as you plan on plugging into an iPhone, iPad or iPod touch, you have everything you need.

However, the Microvision SHOWWX relies on iPhone/iPad apps that have the video out function built-into them. This laser projector doesn’t simply mirror what’s on the iOS device’s screen, cutting-down its usefulness if you want to play games on a large screen, rather than movies. Several relevant apps already offer this function, though, including Netflix, Keynote and – naturally – the inbuilt media player. 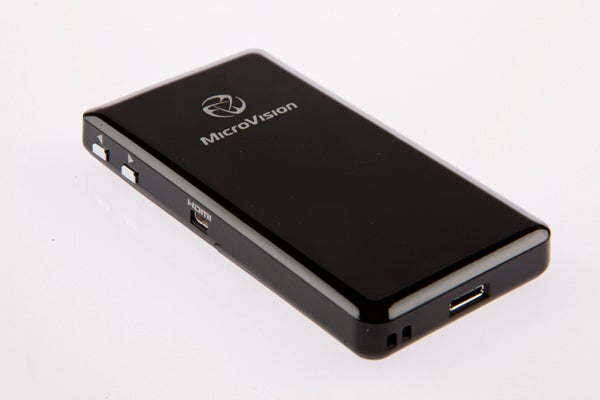 Battery life is another limitation. At top brightness, it lasts less than two hours from a full charge – short enough to cut out before the credits of many films. The specs of its picture are not also particularly impressive by projector and TV standards. With a weedy 15-lumen brightness (161 nits), 5,000:1 contrast ratio and 480 x 800 pixel resolution, it is not going to impress spec-hounds. 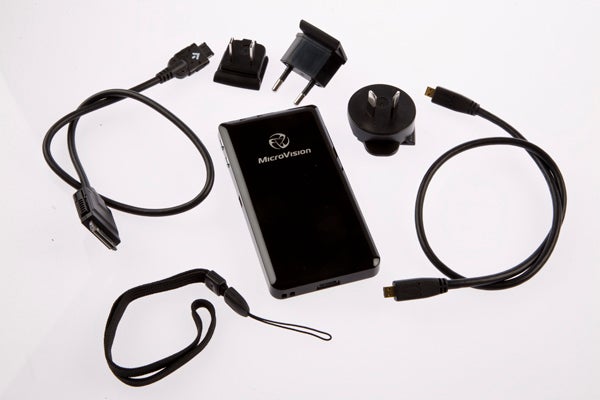 Using LED lighting rather than the lamps generally used in larger projectors has one significant benefit, though – it’s rated for 20,000 hours of use rather than the 1,000-2,000 you’d get from a traditional lamp.

Getting on with the Microvision SHOWWX laser projector is about learning to appreciate its various convenient factors, over its limitations.

The Microvision SHOWWX is a short-throw projector that works best when projecting on surfaces just a couple of feet away. Up this close, two problems with the device’s limited power are minimised. When made to project a roughly 24in-32in image, the 15-lumen brightness is enough to create a watchable picture in dimmed lighting, and the low 848 x 480 resolution is not too apparent.

Try and stretch the image beyond TV-size and picture quality quickly falls apart. Without the power to offer strong brightness, the picture becomes very weak even in a dimmed or dark environment. Stretch the SHOWWX ‘s image to anything approaching Microvision’s claimed maximum of 100in and the image becomes entirely unwatchable. The 848 x 480 resolution looks very soft at large size, and the lack of brightness removes all punch – watching a film at this size is like having a story whispered at you from across a room. 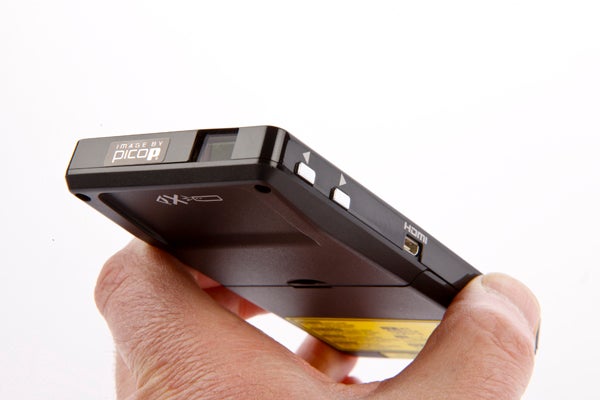 It’s unrealistic to expect an affordable pico projector to offer anything approaching the thousands of lumens offered by mid-level home projectors, but other small projectors do offer more. The Optoma Pico PK301 claims to offer 50 ANSI Lumens, for example. However, attempting to get a truly large image out of any current battery-powered pico projector will have a similar effect – it’s just not going to work.

Keep your image small and picture quality is reasonable. Areas of block white tend to look a little mottled, the RGB lasers seemingly unable to create a convincingly flat tone, but there’s no need to spend any time on focusing – the image stays in focus regardless of positioning. There’s also no keystone adjustment, demanding some careful thought about the angle of the projector in relation to the surface being cast upon, if you care about distortion of the image’s geometry. 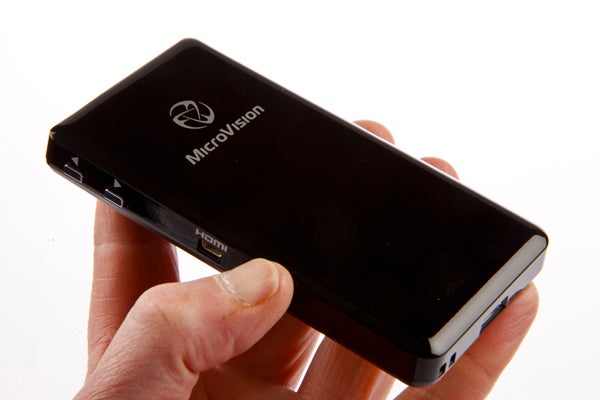 Prospective buyers of the Microvision SHOWWX need to manage their expectations. It’s no replacement for a television, not a satisfying halfway house between a projector and a portable device, and doesn’t have the brightness to deliver presentations at boardroom size.

Where it excels is in environments where picture quality can take a backseat. Microvision’s website sports a picture of a couple camping projecting onto their tent. The image is distorted and clearly lacking in contrast, but when grasping a mug of cocoa out in the wilderness (or the south of France), such problems don’t seem so bad. 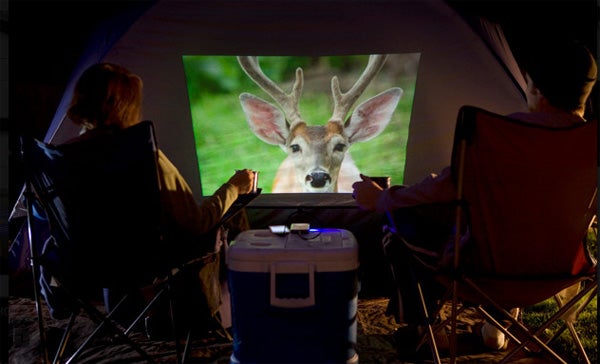 For any less compromised situation, an ultra-portable – rather than pico – projector is a much better idea. Viewsonic’s PLED-W500 costs £200 more and is not battery-powered but offers far better image quality and brightness, while being small enough to stash in a bag for far-away business presentations and trips to movie nights at friends’ houses. For the time being, pico projectors make more sense as tacked-on extras, as in the 3M CP45.

The Microvision SHOWWX laser pico projector is the full package. It’s a battery-powered projector that can be plugged directly into an iPad, iPhone or iPod touch with the help of an included cable. However, it illustrates the problem with almost all current pico projectors – it’s just not bright enough to produce a satisfying image large enough to make projection worthwhile.