The UA Band is only able to track walking and running on its own, and note that there’s no altimeter for tracking stairs climbed. It is possible to log other kinds of workouts, such as weightlifting or cycling for example. The UA Band can be used with the heart rate monitor to great effect, providing details on exertion levels during your workout and approximate calorie burn. I also found it useful to monitor my recovery level during weight training sets.

Using the UA Record app, you can also add other activity types for easy access on the UA Band. It remains disappointing that the UA Band can’t be used for swimming, especially since so many athletes use swimming as their main discipline or for low-impact cardio conditioning.

For tracking runs, chances are you’ll still want to have your smartphone with you for GPS information; otherwise, you’ll have to make do with approximate distance based on the accelerometer. Running without a smartphone garnered reasonably close distance results, at least.

A 5km lunchtime run route measured out at 5.07km for one run but then 5.02km for the next. Unfortunately, no wrist-worn trackers that use accelerometers to estimate distance will ever be completely accurate. You can at least calibrate the distance calculation for more accurate tracking, however.

As for step counting, on a day when I wore it simultaneously with the Garmin Vivomove, there was a 260 step difference between the two trackers – not the end of the world. There’s also an idle alert that vibrates to remind you to get up and take a walk. Annoyingly, you can’t change the duration – it’s an hour or not at all. 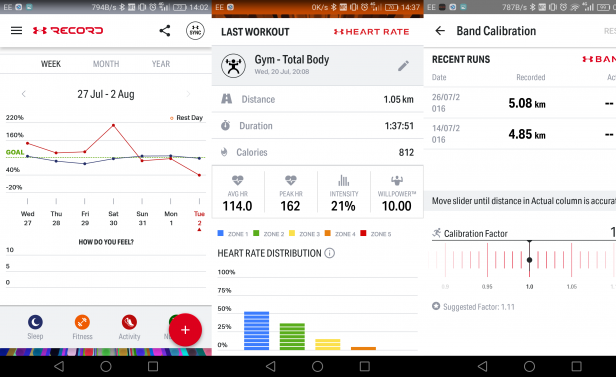 The UA Band has an optical heart rate monitor on its underside, which might leave you questioning why a separate HRM is needed. Optical heart rate monitors aren’t the most accurate when taking readings during intense activity, and Under Armour is the first to admit this. So during actual workouts, you’re supposed to wear the UA Heart Rate.

Instead, the optical HRM on the UA Band is used for monitoring resting heart rate data while you sleep. This means it isn’t susceptible to external factors affecting the reading, giving you a better gauge of your current fitness, recovery level and general well-being.

The advantage of the UA Band is that sleep-tracking is fully automated. The band will detect when you nod off by analysing your movement and the band’s angle on your wrist using the accelerometer. You’ll receive data on the duration of your sleep and how long you spent in the various stages of sleep including light, deep and time awake.

Looking back over the data, the sleep tracking was incredibly accurate. My recorded down and uptime was completely spot on, as well as any bathroom breaks during the night. I’d have liked graph data to show actual movement levels, similar to the Garmin Vivomove, but you do at least receive graph trends over a weekly period that show duration and resting heart rate.

A silent alarm function uses the vibration motor inside the UA Band to try to wake you up while you’re in a light sleep period, so that waking up isn’t quite so jarring. Disappointingly, there’s no smart alarm.

The UA Band is able to store seven days of activity and 10 workouts internally without syncing to the app. It will start overwriting older data if you don’t sync to UA Record.

The UA Scale was by far the most underwhelming part of the entire package. Body-weight measurements were inconsistent, fluctuating by as much as 300g between readings taken only minutes apart.

Since you’re able to set your goal weight, the scale will tell you how far away from your target you are – which would be useful if you could consistently trust the readouts. I tested the UA Scale alongside standard scales that I had at home; the latter proved far more consistent, only occasionally deviating by 100g if I adjusted my posture awkwardly.

The body-fat analysis fared even worse, it was prone to massive fluctuations. Throughout testing, there was as much as a 4% deviation in the results. This may not sound substantial, but with regards to body fat percentage this is a significant difference.

Even at its lowest measurement, the UA Scale put me at 12.5% one day, but more consistently at above 15% and as high as 16.4% on other days. Putting aside what I believe my body fat percentage to be for one second, this level of fluctuation isn’t ideal, even when factoring in the generally less accurate method of using bio-electrical impedence to generate a reading. 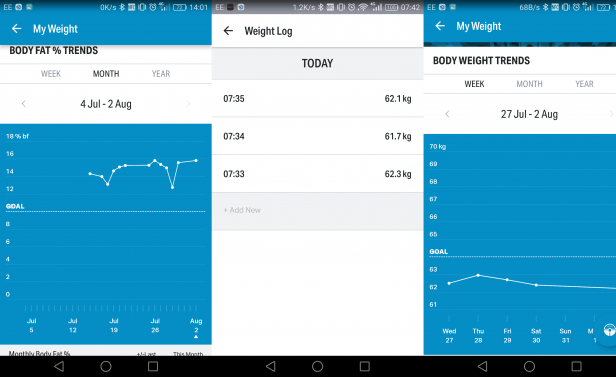 While body-fat scales are known for being inaccurate, they’re typically consistently inaccurate so you can at least track progress. Trying to plot any logical progress against the rollercoaster-like graph here would basically be impossible.

There’s an “Athlete” mode setting in the UA Record app, which is meant to calibrate readings to those at a low body-fat level, which is what I had the scale set to. Turn it to “Regular” mode and you can add another 2-3% on average to each reading.

I also encountered a strange bug where I had to set the unit type to the opposite of what I wanted to appear on the scales through the UA Record app. So if I set the scale to display in pounds in the app, it would show as kilograms on the scale.

The UA Record app is at the heart of pulling together all of the data. That includes activity and sleep from the UA Band, heart-rate readings from the UA Heart Rate, and weight and body fat percentage from the UA Scale. Considering the multitude of information, the app is surprisingly clean and easy to navigate.

A four-quadrant status indicator sits front and centre, which draws parallels with the design of the UA Scale. It gives you an instant overview of all of the data points and is broken up into Activity, Nutrition, Fitness and Sleep. The quadrant will update to display your progress level when the corresponding device syncs with the app. Tapping each quadrant takes you to the separate sections, where you can view further information or log more data manually. 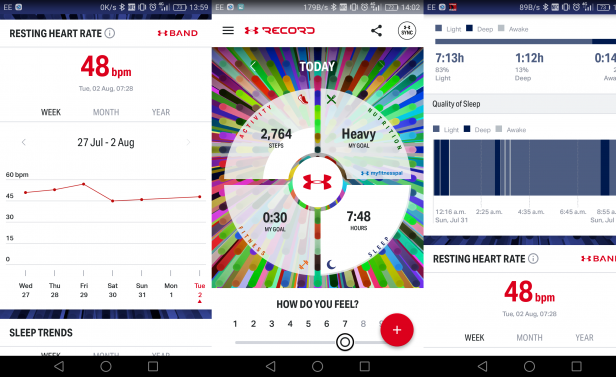 The Nutrition quadrant, for example, lets you either log your diet at a very basic level (either light, medium or heavy calorie intake), or at a more granular level by integrating with Under Armour’s MyFitnessPal app, which you need to download separately. This will let you log every item of food and drink you consume, but it’s a little annoying that you have to access a separate app, however.

Diving into one of your fitness activities, you’ll receive an Under Armour Willpower measurement if you’re wearing the HRM. This gives you a score out of 10 to show how hard you worked out and is a surprisingly good incentive to push yourself. You can also view how long you were in different heart rate zones.

Scroll down the main screen and there’s a “How do you feel?” section, where you can rate yourself out of 10. This is supposed to be for determining whether there’s any correlation between all of the data points, but I didn’t find it particularly useful; more often than not, I forgot to make a selection each day. Scroll further and you’ll see more graphs that chart your daily progress relating to the four quadrants plus your resting heart-rate information.

Considering the wealth of data, Under Armour should be commended for the fact that the presentation of all that info in the app never once feels overwhelming.

It’s worth noting that I tested using the Android app, which at the time of writing doesn’t have IBM Watson integration – it’s set to be updated later in the year.

The iOS version uses IBM’s data-processing technology to compare your data and provide better advice and observations – called Insights – such as the time of day and the weather conditions in which you perform best.