From a digital drill sergeant to advice from living, breathing nutritionists – we recommend the best Android and iOS apps for keeping track of how much food you’re putting away.

Aside from ‘Dr’ Gillian McKeith’s puzzling faecal fascination, the grossest part of her weight-loss show was that week’s victim confronting all the food they got through in seven days, piled up on a trestle table in all its glory.

Ignoring the fact that even a week’s worth of healthy food would look grim all smooshed up like that, this extreme way of confronting food intake definitely does do the trick where it comes to accountability. Those calories simply have nowhere to hide.

Thankfully, in this day and age, being shamed on national TV is no longer necessary for us to take a step back and analyse our eating habits. Yes, there’s an app for that. Well, plenty actually.

Calorie counter apps come in a variety of flavours, but their methodology is the same: tell the app your current weight and how much you want to weigh. The app then sets a calorie intake to hit that ideal weight and estimates how long it will take to achieve. From then on, you record everything you eat and drink in the app, and the better ones will even let you scan the barcodes on your grub and grab the details from a food database.

They’re basically a food diary with far less hassle, and though the difficult business of weight loss is a bit more nuanced than a simple calories-in-versus-calories-burned equation, using one is a smart first step on the path to getting in better shape.

Read on for our pick of the five best calorie counter apps for Android and iOS. 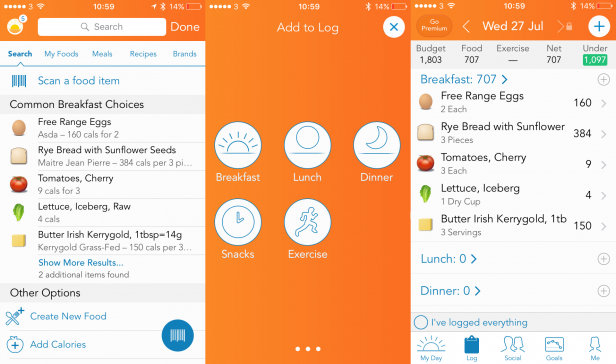 Calorie counter apps have barcode scanners to make inputting meals as effortless as possible. Unfortunately, most have limited databases – or at least US-centric ones – so many products aren’t recognised. Lose It! happily scanned in nearly everything I threw its way, from big brands to the supermarket’s own products.

With food and quantity logged, it displays the calories you’ve had and how many are left before hitting that day’s target. Do some exercise and you’ll offset them. You can manually input workouts, but it also communicates with your phone to automatically retrieve activity info.

Macronutrient data shows fat, carbs and protein intake. Head to the companion website and you get even more ways of viewing and analysing your data. Going premium (£2.50/month, £29.99/year) gets you group challenges and access to meal plans and fitness articles, but with the free version offering such a complete, streamlined package, you don’t need to spend a penny to start losing weight – no matter how much the frequent prompts to upgrade might make it seem otherwise. 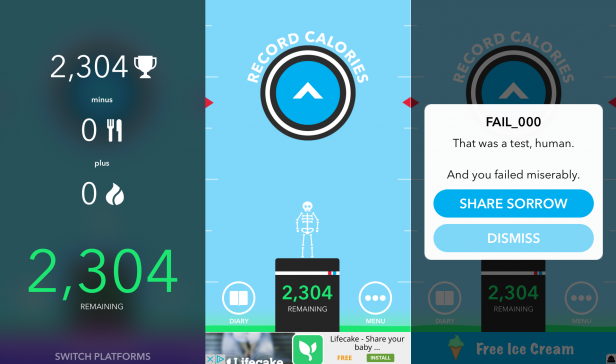 ‘I, CARROT, am your new ARBITER OF FOOD INTAKE,’ is the greeting for new users of this app that, despite its name, definitely goes for the stick approach. In that sense, CARROT’s digital coach is a bit like the aforementioned Gillian McKeith. Although unlike the television personality, it’s also hilarious. While most apps simply request your birth date, CARROT asks, ‘On what date did you get pushed screaming out of your mother’s womb?’ It even has snarky descriptions for different age ranges, changing from ‘Optimistic Adult’ at 29 to ‘Pessimistic Adult’ as you switch it to 30. Thanks, CARROT.

The mild bullying extends to its notifications. There’s nothing like being reminded to ‘Stop stuffing your face and log your lunch, meatbag’ to get you to fall in line. It can even extend to the physical world. Put an iBeacon sensor in your fridge and not only will it remind you to log foods whenever you open it, but an alarm will go off if you’ve already hit your calorie goal.

Unfortunately, the barcode reader rarely works (in the UK, at least). If you scan something it doesn’t have, however, you can enter the name and nutritional information to save it for next time. Don’t let that put you off using this funny and – more importantly – genuinely motivating calorie counter app. Laughing out loud while being goaded to eat less is a strange, wonderful thing. 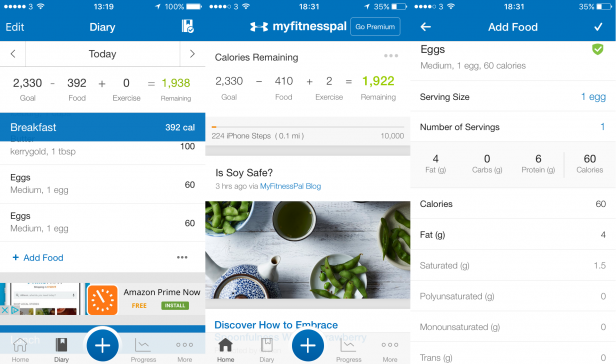 The world’s most downloaded calorie tracking app is also the most comprehensive in terms of nutritional information. Log something and MyFitnessPal doesn’t just tell you how much of the big three (fat, carbs, protein) that food contains, but it lists everything from cholesterol to vitamins. It also lets you tailor your goals not just around weight loss, but macronutrient targets. A useful feature if you’re trying to pack on muscle, are on a low-carb diet or trying to cut out sugar entirely.

The barcode scanner is hit and miss, recognising some fairly obscure products yet claiming ignorance when it comes to a few massive brands, but overall adding foods is quick and simple. There’s even a step-by-step tutorial so you won’t have to act as 24/7 tech support if you recommend it to a parent or anyone else of the technophobic persuasion. As well as remembering recently and frequently added foods, you can store any meal you make in the database, saving the hassle of entering every ingredient next time it’s on the menu.

Owned by US fitness brand Under Armour, the app can be a bit pushy about pairing it up with one of their trackers, but it still gets activity data from your phone, and manually entered workouts are saved to make it quicker to add them in future. Like Lose It!, MyFitnessPal also has a companion website with even more ways of poring over your data. MyFitnessPal Premium (£7.99/month, £39.99/year) removes the ads and gives you extra functions, including more granular targets such as macronutrients by gram as well as different goals for days of the week (hello, ‘cheat day’). 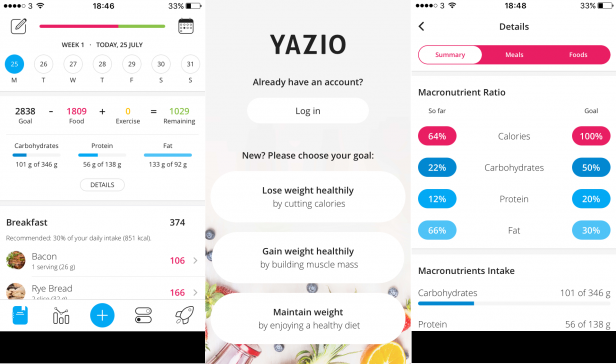 YAZIO is the only app I’ve found that caters not just for people wanting to lose the pounds, but those who want to maintain their current weight and even anyone wanting to gain weight. After asking your goal and getting your vital statistics, it tells you how long it will take to achieve your aim. A sliding scale lets you adjust the amount you want to lose or gain each week, but it’ll warn you off opting for anything unrealistic or unhealthy.

Your goal, intake, exercise and calories remaining, along with carbs, protein and fat, are clearly displayed at the top of the home screen. You can get a more detailed macronutrient breakdown, but only if you get the Pro version ($2.49/month, $29.99/year). So, why choose this over MyFitnessPal? It has unique features, such as suggested calorie, fat, carbs and protein intake for each meal, that adjust on the fly to take into account meals already logged for that day. It also has more British brands, making inputting foods easier and more accurate.

It syncs with other apps such as Apple Health and Google Fit, but it didn’t automatically pull in my activity data on a couple of days for some reason. Going some way to making up for that, the exercise list is the most exhaustive I’ve seen – bungee jumpers rejoice! – so letting YAZIO know what you’ve been up to takes no time at all, making it more than just a food diary. 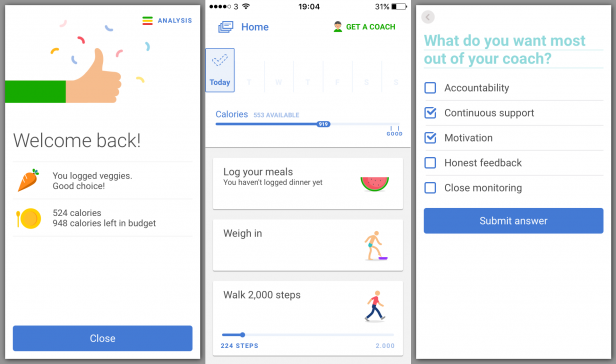 The free version of Noom Coach is an uncluttered calorie counter app with a unique feature in its colour-coded flags (green, yellow and red) for foods based on their glycemic index – how long they take to affect blood glucose level. It also suggests foods to pair with others, such as rice with curry, making inputting meals a tad quicker. But this is one app that really benefits from parting with your hard-earned cash.

Research shows starting your war against the wobble is more effective as a group rather than going it alone. Upgrading to the paid version groups you with users with similar goals. You then have access to chat areas where you can discuss how bloody hungry you are. Or use it to motivate yourself and encourage others, which is probably best. You also get assigned a ‘personal’ coach to help you fit into that suit, lose your gut, reduce diabetes risk, lower blood pressure or whatever you have in mind. In reality, your coach will also be working with up to 200 other users who share your goals, and most of the messages you get are generic to that group. You can, however, chat one-on-one to ask your own questions and get instant answers.

The catch? The premium service costs £45 per month. It’s expensive, but if you’ve got the cash to spare it’s a snip compared to the price of even one session with a nutritionist in person. The relatively high asking price also has the effect of weeding out anyone not serious about losing weight, resulting in a highly vocal and active community that really does help you put down that doughnut, reach for the greens and finally get rid of that gut.

Do you keep a food diary? Let us know in the comments below.