What is the Under Armour HealthBox?

The Under Armour HealthBox aims to be an all-encompassing package that can track and record every aspect of your fitness and health. The product is designed for people looking to improve their overall fitness, or hit new personal bests by being able to monitor the multiple facets of their training regime and seeing how this correlates with performance. However, issues with its basic design and tracking accuracy make it a poor choice for people in its target market.

The box includes the UA Band wrist-worn activity tracker, the chest-worn UA Heart Rate HRM and the smart body-fat-reading UA Scale. All the data gathered is synced with Under Armour’s Record app to provide an overview of your health.

The HealthBox’s components are actually made by HTC in partnership with Under Armour, so you’ll find flashes of HTC branding in places. The devices all come well presented in the box, so kudos to Under Armour for the packaging. The large scale takes centre stage, flanked by the heart rate band and activity tracker. 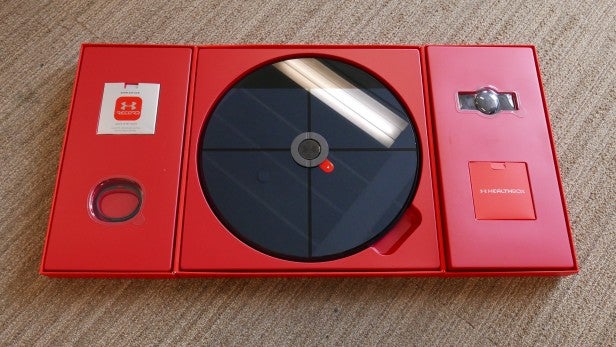 It’s worth looking into each device independently, so this review can essentially be considered three rolled into one.

The cuff-shaped wrist-worn tracker is a pretty standard affair, and not a huge design departure from the likes of the Microsoft Band 2 or Garmin Vivosmart HR Plus. The main difference being those devices have far superior displays. 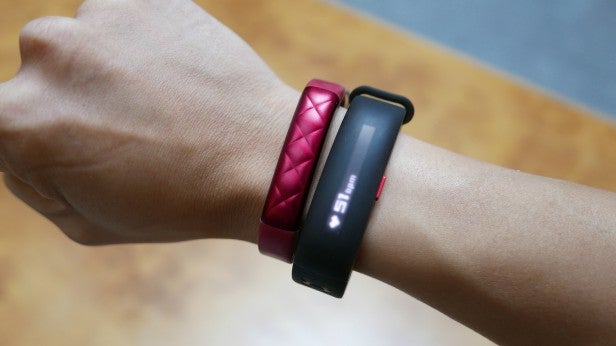 While the UA Band has a width of around 17mm, the display is only a fraction of this, leaving you with a rather large and drab bezel. It’s a thin touch-sensitive strip that you navigate by tapping and swiping. The quality isn’t particularly great, either. It’s a low-resolution POLED (Plastic OLED) display behind a matte coating that can be difficult to view outdoors in sunlight, even when set to its maximum brightness.

The UA Band can display basic notifications, such as who’s calling, but since the screen is so small it isn’t particularly useful. You can also use the band to control your music playback on your connected smartphone, but this requires too many taps to access the remote control to make it convenient.

Along the edge of the UA Band you’ll find a small red button that contrasts against the rest of the band’s black design. It’s used to turn on the display, and it means that doing something as simple as checking the time becomes a  laborious process. 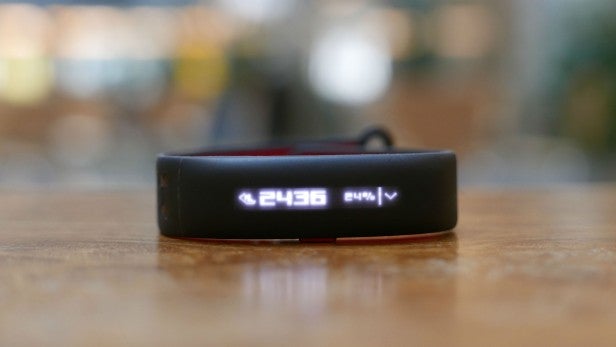 Along the edge you’ll find a small multi-coloured LED (more on this in the UA Heart Rate section); and on the rear of the UA Band sits an optical heart rate monitor.

The strap is fastened using a double-button clasp, which I found held well; the band never once became dislodged or popped off my wrist in the month of testing. In the box you’ll find two bands of different sizes to accommodate different-sized wrists. Unfortunately, the smaller band wouldn’t stay attached to the UA Band I tested. Wrapping the band around my wrist would cause the band to pop off at the point it joined the tracker. As a result, I had to use the large band on its smallest size instead. 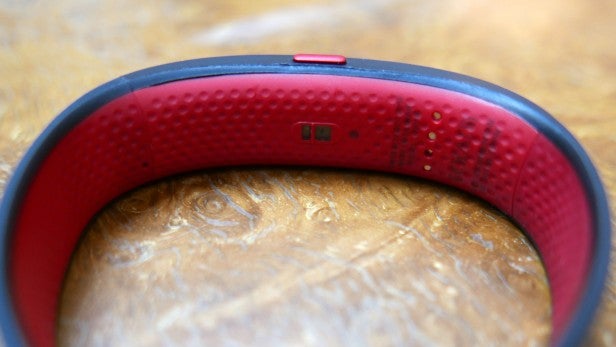 While its design is rather uninspiring, I experienced no issues with comfort and rarely took the device off during the month of testing. It’s rated as 2ATM, so splash- and sweat-proof, and wearing the device while taking a shower didn’t result in any issues – although it isn’t designed to be worn whilst swimming. Since sleep tracking is a vital aspect of the HealthBox system, I was pleased to find it wasn’t uncomfortable to wear in bed, either.

Much like the UA Band, the UA Heart Rate isn’t massively different to heart rate monitors that have come before it. In its favour, the circular Bluetooth transmitting component is smaller than that of the MyZone MZ-3. I also found it marginally more comfortable. You can remove the transmitter when you want to give the strap a wash. As you’d expect, the UA Heart Rate is sweat-resistant. 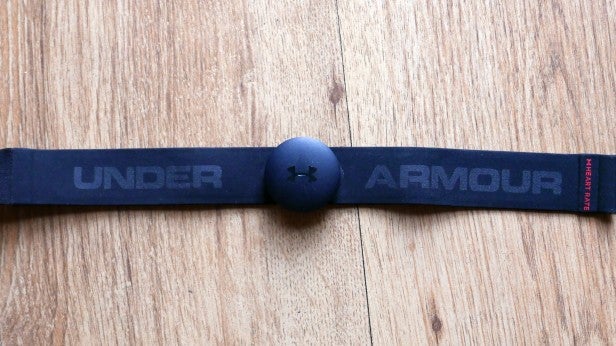 The UA logo lights up with a blue light to show that the heart rate monitor is working; not only does this make you feel like Iron Man, but makes it obvious that the device is detecting your heart rate, which was a complaint I levelled at the MyZone MZ-3. The UA Heart Rate turns on only when the sensors on the rear of the strap detect contact with skin. In comparison to other heart rate monitors I’ve tested, it was one of the fastest to turn on.

On its own, the UA Heart Rate isn’t particularly exciting, but when used alongside the UA Band, the small LED light on the side of the band will light up to show you which heart rate zone you’re currently in. It provides an at-a-glance view of how hard you’re pushing yourself, which is great for interval training, or if you’re suitably recovered before you begin the next weightlifting set.

While the UA Band and UA Heart Rate are both rather hum-drum in the design stakes, the UA Scale is a far more premium, exciting-looking device. It’s still just a scale, but it looks rather lovely.

A perfect circle with a glossy glass top, it’s finished in black. But while this looks classy, it’s a magnet for dust and smudges – not something you’ll be able to avoid when you need to be barefoot when weighing yourself to get a body fat percentage reading. 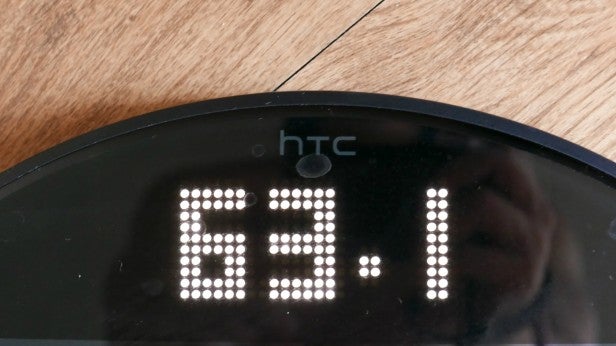 In this instance, the camera literally adds 400g

An LED display sits in the top portion of the scale, and below that it’s split into four quadrants. This can be used for navigating the basic menu and is also where the scale applies its bio-electrical impedance current to take body fat readings.

The UA Scale recognises users based on their weight, but it will misidentify if you have multiple users that are around the same weight. With the navigation you can change profiles manually, with the scale able to manage up to eight different users. The display is clear, bright and easy to read. The scale can also play a chime when recordings are taken.

Each device that makes up the Under Armour HealthBox needs to be set up individually, and this is done via the UA Record app, which is available on iOS or Android. I used the Android app during testing. The process is well explained throughout, but some devices still proved trickier than others.

The UA Band will automatically be in pairing mode out of the box and communicates with UA Record through Bluetooth. This worked without a hitch and the two were paired and ready after a minute or so. The UA Heart Rate proved more difficult, successful only after several attempts.

Setup was even trickier with the UA Scales. At first the two wouldn’t pair at all; in the end I had to delve into Android’s Bluetooth menu to try to pair the devices via that method instead. Once connected over Bluetooth, the scales will then need to be connected to your Wi-Fi network. This will then automatically synchronise your weight and body fat percentage whenever the scales are used.

Thankfully, you only need to go through this rigamarole once. Thereafter, the UA Band always synced with the app automatically and the UA Heart Rate connected to the UA Band whenever a new activity was started.