TVonics dinky MDR-240 is an impressive Freeview receiver, but now we’ve got the chance to see how well that quality holds up when they chuck hard-disk recording into the mix. As the name suggests, the DTR-HV250 comes equipped with a sizeable 250GB hard-disk, which equates to around 125 hours of recordings, and like all products from the TVonics stable ease-of-use is a top priority.

A hands-on inspection reveals the DTR-HV250 to be an exceptionally well-made piece of kit. This is not a lightweight and plasticky box like the MDR-240 – this time the casing has been fashioned from sturdy metal and is reassuringly heavy as a result. Aesthetically the unit is very interesting, taking its cue from previous TVonics PVRs like the DTR-Z250. It’s always good to see a company trying something a little bit different, and here the curved sides, glossy black finish and compact dimensions (just 185mm wide) create a distinctive looking unit, the likes of which are all too rare in the PVR market.


TVonics has introduced an excellent LED display that shows the full name of the current channel, plus the programme name scrolls across when you first turn over. On the right is one of two USB ports, which allow you to connect card readers and flash drives and view JPEG photos on your TV, as well as upload software updates downloaded from the TVonics website.

The rear panel is equally impressive. This is the first TVonics product with an HDMI output, which sends 576i/p, 720p and 1080i video to your TV (selectable in the setup menu). But even more pleasing is the inclusion of two HDMI v1.3a inputs, turning this receiver into a smart little HDMI switchbox for those with only one input on their TV. These will pass through 1080/24p and HD audio signals too, so your Blu-ray player is in safe hands, but the pass-through function doesn’t work when the unit is in standby. These HDMI ports are joined by an RGB-capable SCART output, optical digital audio output, RF in/out sockets and the second USB port.


The inclusion of twin tuners means you can record one channel and watch another, or record two programmes at the same time. When recording two programmes you can’t watch a third as you can on some PVRs, which you might find restrictive – the programme change keys simply flip between the two channels being recorded.

Being a Freeview+ branded product, it’s teeming with clever recording features, the most important of which is series link. It’s effortless to use – enter the eight-day onscreen EPG, select the programme you want, press record and a dialogue box gives you the option of recording the whole series. No unnecessary submenus, no pidgin English, just a quick, easy process. 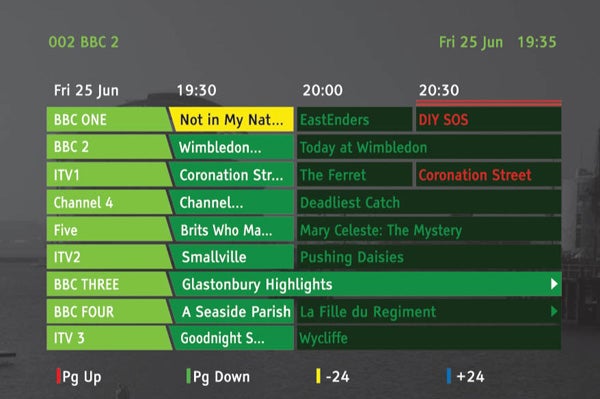 If the programmed recording clashes with others, a different box offers ‘Resolve Conflict’ and ‘Cancel Timer’ options. Select the former and you get a stripped-down EPG listing the channels in question – simply pick the one you want to delete. Furthermore, when cancelling a timer, it asks if you want to delete just the event in question or the entire series. This use of plain English to describe each function is what we love most about the DTR-HV250.


That said, TVonics takes a fairly no-frills approach to its onscreen menu design, with bog-standard boxes and icon-free lists, but everything is so easy to read, articulately described and sensibly structured that the lack of pizzazz is utterly forgiveable. In any case, most users would put simplicity over flash graphics any day of the week. 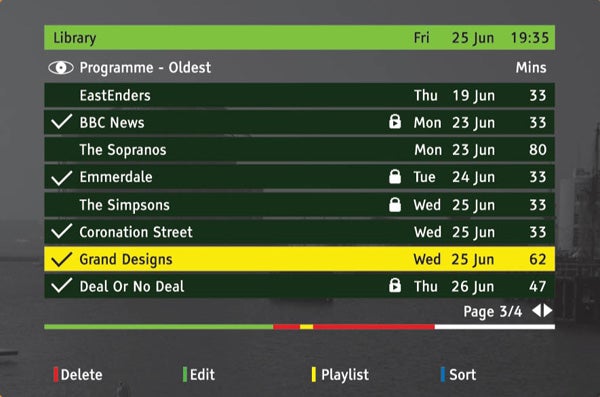 Other things we like include the no-nonsense EPG, which shows nine channels at a time, and the onscreen info banner, which lets you search through the entire schedules without limiting you to now & next details as some PVRs do.


By default, the recording library lists stored programmes from newest down to oldest, although you can re-sort it by name or duration to make things easy to find. Select something to watch and you’re given the choice of resuming, playing from the start or manually entering a start point, just like Sky+. You can also compile playlists, which comes in handy when backing up a batch of recordings on an external recorder. 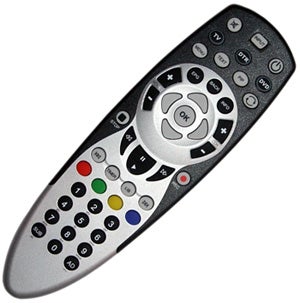 For the remote, TVonics has shrewdly chosen to mimic the Sky+ zapper. It’s not quite as intuitive, but has all the right elements – menu, playback and volume/channel change controls conveniently clustered in the centre, with the important EPG, Back and Info buttons fanned out above them. Everything else is easy to find and clearly labelled, making it a dream to use – good news given that it’ll be a big part of your everyday life.

Just a few other features to round up – you can pause and rewind live TV with a buffer memory that can be set between 10 minutes and 2 hours, access digital text, subtitles and audio description, plus there’s a useful picture-in-picture mode that lets you keep an eye on two channels at the same time. You can move the box to any corner of the screen or swap it with the main picture. Overall the DTR-HV250 offers a wonderful array of functionality that won’t fail to impress those with even the most demanding recording requirements. 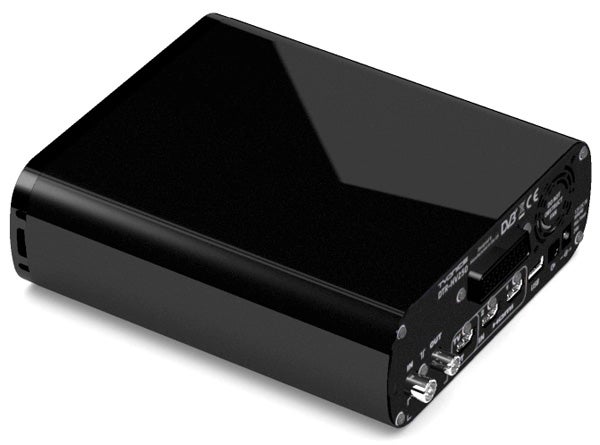 Performance-wise the DTR-HV250 posed no problems whatsoever. It tuned in the 63 TV, 23 radio and 11 data channels in under a minute and provided consistently robust picture quality (even when the weather took a turn for the worse). What’s more, channels change instantaneously, digital text loads up in the blink of an eye and pause live TV works flawlessly. And because the unit tracks start and end times provided by the broadcasters, it never truncated any recordings during the test.

Freeview channels look as good as they possibly can, and the use of an HDMI port and 1080i upscaling gives the image a crisp, punchy look. You can’t escape the inherent block noise that plagues areas of intense, moving detail (the ”X-Factor” winner’s ticker tape celebrations are a shimmering mess) but we haven’t seen a Freeview product yet that tames this completely. Recordings play back from the hard-disk without a hitch too, and look identical to live broadcasts. Sonically, speech is clear and audible, and the ability to output the sound digitally is a real bonus if you own a good quality sound system.


The DTR-HV250 is a class act through and through. The combination of rock-solid build quality, generous features, glitch-free pictures and a straightforward operating system makes it the perfect PVR for newcomers and old hands alike. It’s also exceptionally good value for money, especially when you consider that you’re also getting a decent HDMI switcher into the bargain. In fact it’s so good it even gives the Humax PVR-9300T a run for its money, and that really is saying something.