What is the Turtle Beach Ear Force Stealth 450?

Wireless gaming headsets often come at a hefty price. Cutting the cord will usually cost you upwards of £150 or even £200. So it’s always tempting when a headset like Turtle Beach’s Ear Force Stealth 450 comes along for under £100, especially when it also incorporates DTS Headphone X 7.1 channel sound. 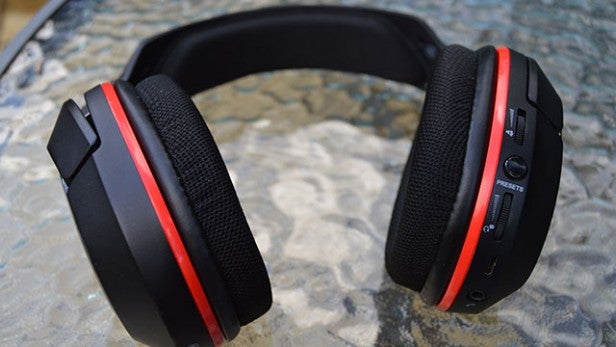 The Ear Force Stealth 450 is another example of Turtle Beach’s sudden interest in making products that are actually stylish. While its previous headsets have usually sounded good, the company wasn’t known for its product design. Its headsets were all buttons, gaudy colours and flashing lights. The Ear Force Stealth 450 addresses this issue with a headset that is subtle and understated, and something you might actually want to wear in public.

The black plastic construction of the Ear Force Stealth 450 is basic but light and sturdy, with the buttons and wheels discreetly parked around the back where they’re not easy to press accidentally. It looks more like a lifestyle headset than a gaming headset, although the red trimming is a bit of a giveaway (Turtle Beach still feels the need to colour-code its range, with red for PC, blue for PlayStation and green for Xbox).

Setting up the Ear Force Stealth 450 is simple. You plug the USB transmitter into a free slot on your PC or Mac, tell your computer to output sound to the Ear Force Stealth 450, and turn the headset on. That’s it. You don’t have to install any drivers for it to work, although you will need to if you want the advanced audio features on PC. If the transmitter and headset aren’t paired, you just insert a paperclip into the side of the transmitter and hold the power button down on the headset. 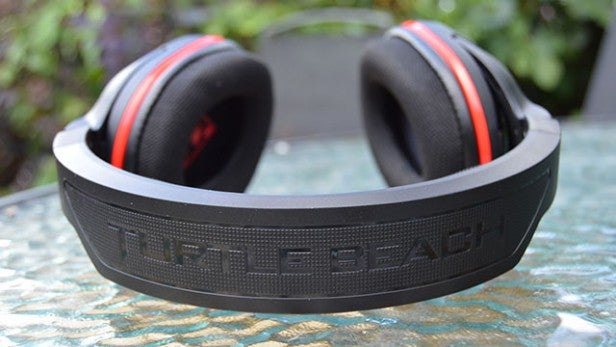 While the Ear Force Stealth 450 works on a Mac, you’re going to want to use it on a PC with Windows 7 or greater if you want all the features that Turtle Beach boasts about on the box. Once you’ve downloaded the Turtle Beach installation tool, you can go into the Windows system settings and set up 7.1 surround sound, which is then mixed for the headset using the on-board DTS Headphone:X decoder.

You can also tweak the surround mix for the type of entertainment you’re using, be it Game, Movie or Music. Turtle Beach has cleverly put a “Preset” button on the headset to cycle through these modes so that you don’t have to keep going into the system settings to change them. You can also switch back to stereo mode at any time if you don’t want the fancy surround sound processing.

With Turtle Beach’s PC drivers installed, you can also turn on Superhuman Hearing, which works in tandem with the DTS technology to enhance audio details such as footsteps, grenade drops and weapon reloads. It helps you to pinpoint potential threats in games like Call of Duty and Battlefield, and in theory gain the upper-hand in multiplayer matches. It’s aimed at pro or serious gamers, but thankfully you can set a hotkey to turn Superhuman Hearing on and off in-game. 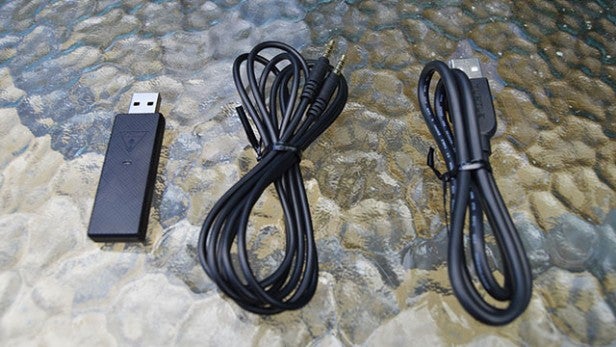 Turtle Beach also includes a headphone cable to let you hook up the Ear Force Stealth 450 to your mobile or tablet. Sadly, this is where Turtle Beach has cut corners to meet that low £99 price point. Other headsets at a similar price include an in-line remote and microphone so you can control your music and take phone calls. You can’t do either on the Ear Force Stealth 450 — all you can do is listen to your music in stereo. Thankfully, there are still some audio presets available to stereo users tailored to the music you’re listening to, including Natural, Bass Boost, Bass and Treble Boost and Vocal Boost.

There are two wheels to control audio and microphone volume levels, a button to mute the microphone, and the preset button to cycle through listening modes. The Turtle Beach logo on the right ear cup also turns the headset on and off, and both ear cups light up white when the headset is on.

There are also a couple of ports on the headset. The first is for the boom mic, which slots into the left ear cup whenever you need it, and can be removed when you don’t. This is a smart design choice from Turtle Beach as it allows you to easily use the Stealth 450 as an ordinary pair of headphones if you don’t need to communicate with other people. The boom mic is excellen. The arm holds whatever position you bend it into, and your voice comes through the speakers, so you can monitor how loud you are. The second port is a micro USB, to be used with the bundled cable to charge the headset.

Turtle Beach quote a battery life of 15 hours, and we were able to get a good couple hours more from a full charge (which takes three hours). The headset sadly has to be powered on using the battery, even if you’re not using the wireless receiver. But the lengthy battery life means that even if you’re listening to music all day or taking a long-haul flight, you won’t run out of battery. It’s especially good compared to the Turtle Beach 800X’s 10 hour battery life, although that headset does also have active noise cancellation, which is particularly battery-intensive. 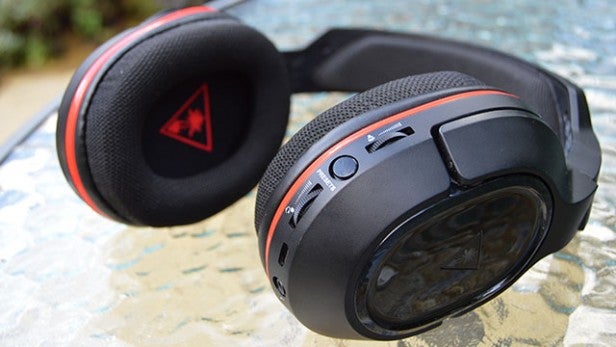 The engineering team at Turtle Beach have done a great job with the Ear Force Stealth 450’s 50mm drivers, because this is a great-sounding headset. On the standard stereo setting, music sounds fantastic, with deep bass and loads of detail in the vocals, both of which can be amplified using the presets. The Stealth 450 also goes really loud without distorting, which is usually a giveaway of a cheaper headset.

On a PC with DTS Headphone:X engaged, things sound even better. The surround sound mix and presets work brilliantly across games, movies and music. Unlike some Turtle Beach products, there are only a few different presets to keeps thing simple, while the audio feedback through the headset always makes it clear what mode you’re listening in. One of the downsides of great audio quality is that a lot of noise spills out of the headset. If you’re listening at more than about 35 per cent volume in a quiet room, those around you are going to hear it.

The microphone also deserves praise. Some of Turtle Beach’s headsets with discreet mics suffer when it comes to vocals, but the Ear Force Stealth 450 has a boom mic which provides clear online communication. It helps that the headset also pumps your own voice back through the speakers, so you can guage how you sound.

Although the USB transmitter is only the same size as a USB pen drive, the range is fantastic. The stated range is 30 feet, with Turtle Beach claiming that the transmitter will hop across frequencies to avoid any interference it encounters. We found that it was actually even better than that quoted distance. We were able to go onto another floor of the house with the signal only dropping very occasionally. If you like to wear your headphones while cleaning the house (and what gamer doesn’t), then the Ear Force Stealth 450 allow you this convenience. 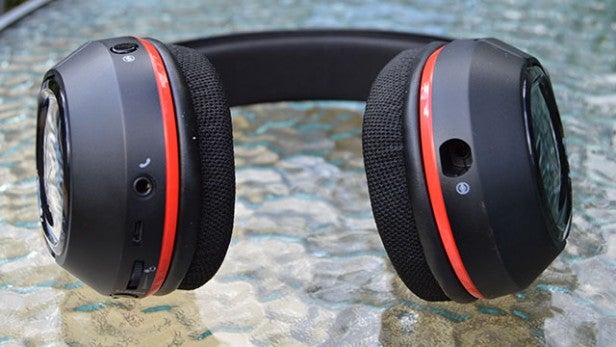 Should I buy the Turtle Beach Ear Force Stealth 450?

It’s rare that you find a bargain in the gaming headset market. Many headsets at the top-end feel overpriced, while at the low-end, you often get a sub-standard audio experience. The Turtle Beach Ear Force Stealth 450 is different. It’s well made, packed with features and sounds brilliant, all for a really competitive price.

It’s only really the included mobile cable that truly disappoints. Mobile users will miss the in-line remote and microphone that’s standard on Turtle Beach’s £150 wireless headsets. Otherwise, it nails the basics. Wireless range is excellent, battery life exceeds the average, and the setup process is quick and simple.

If you’re looking for a PC wireless gaming headset that doesn’t break the bank but still has all the features you really need, then the Stealth 450 is the headset to get.