With three satellites in the box, the TP-Link Deco X60 has the best overall coverage of any Wi-Fi 6 mesh system that we've tested, which is impressive given that it's also one of the cheapest. The trade-off is that this model is a touch slower than its rivals, and doesn't have a dedicated wireless backhaul for communication between satellites. If you value coverage over raw speeds, then there's a lot to like about this feature-packed mesh system.

We’ve seen a surge in the number of Wi-Fi 6 mesh systems, but the TP-Link Deco X60 is the first one that I’ve tested with three satellites.

It’s also cheaper than the other systems I’ve reviewed, showing Wi-Fi 6 prices are starting to drop.

Sure, you get some compromises to hit this price, but if you need greater coverage than speed and want the latest technology the X60 does a lot of things right.

If you’ve seen other TP-Link Deco devices before, the design of the X60 won’t come as a shock. Each satellite is a neat white cylinder that looks unobtrusive.

These satellites are a little taller than previous Deco satellites, but they’re still small enough to place out of the way (110 mm × 110 x 114mm). 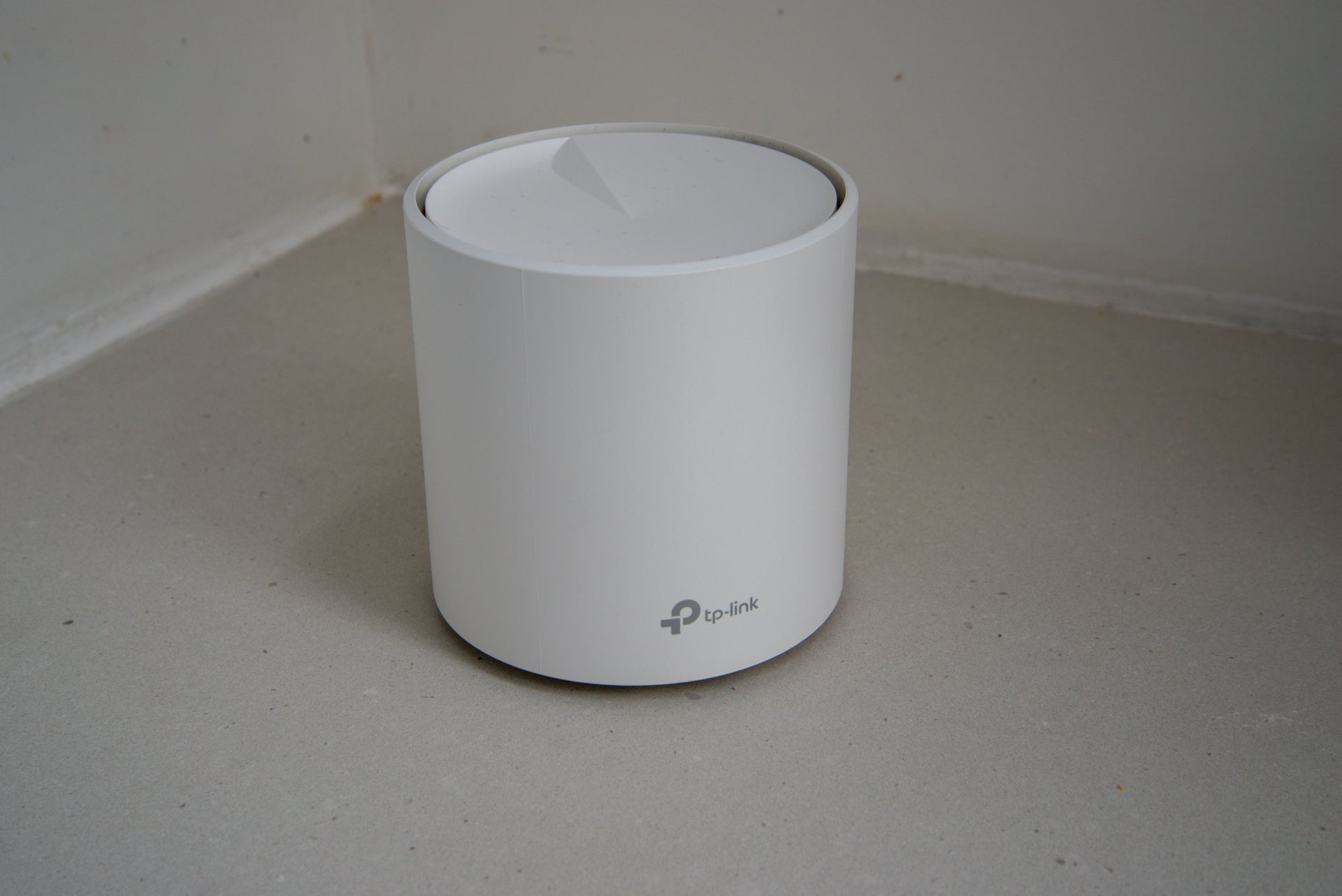 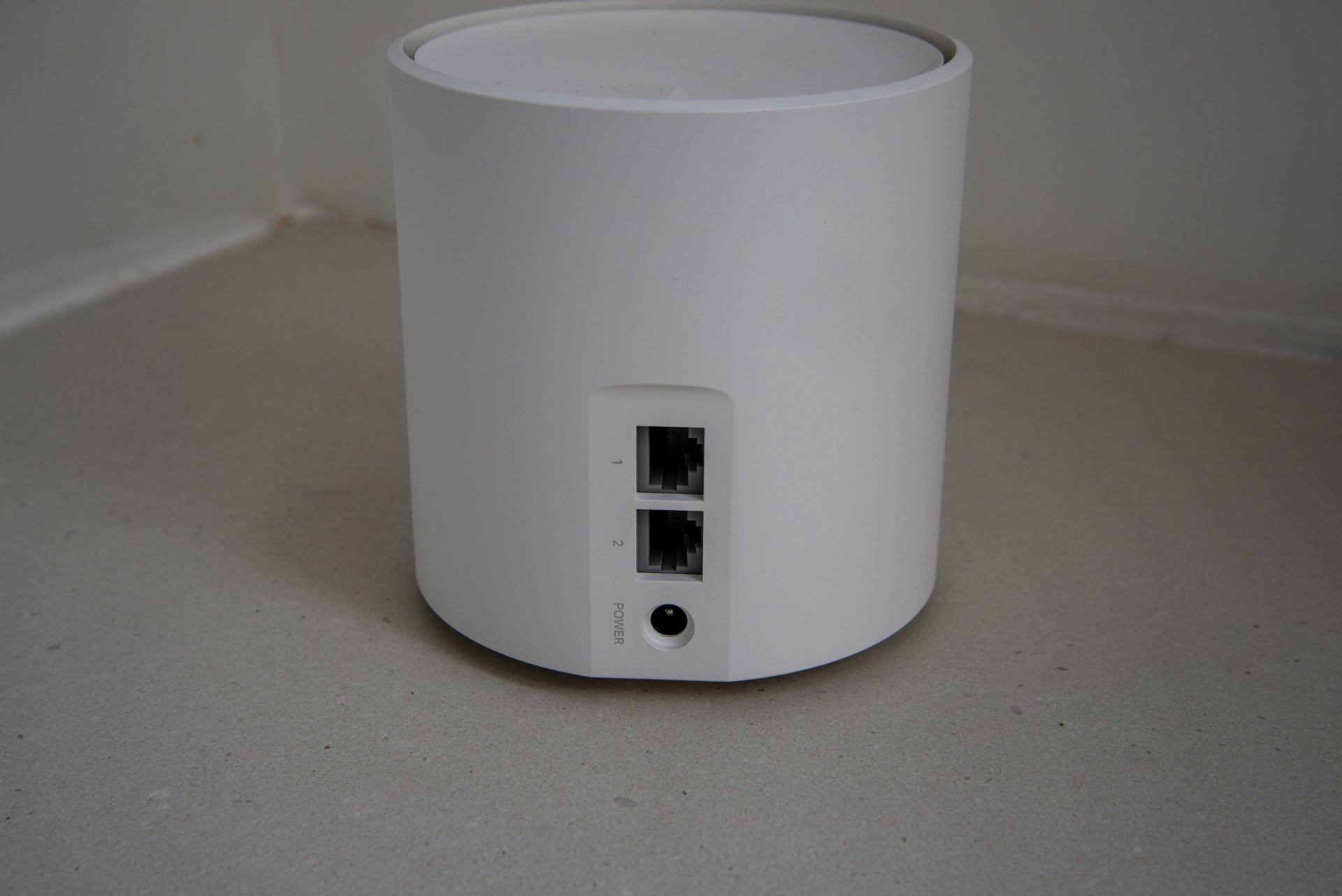 It would have been nice to see a faster 2.5Gbps Ethernet port for the WAN, preparing the Deco X60 for next-gen full-fibre internet connections, but I can forgive this at this price.

Configuration of the Deco system is via the Deco app. It’s pretty quick to get started with the first satellite, and I soon had an internet connection and a secure wireless network.

It was then a simple matter of plugging the other satellites in where I wanted them, and they joined the first one automatically creating my mesh network. 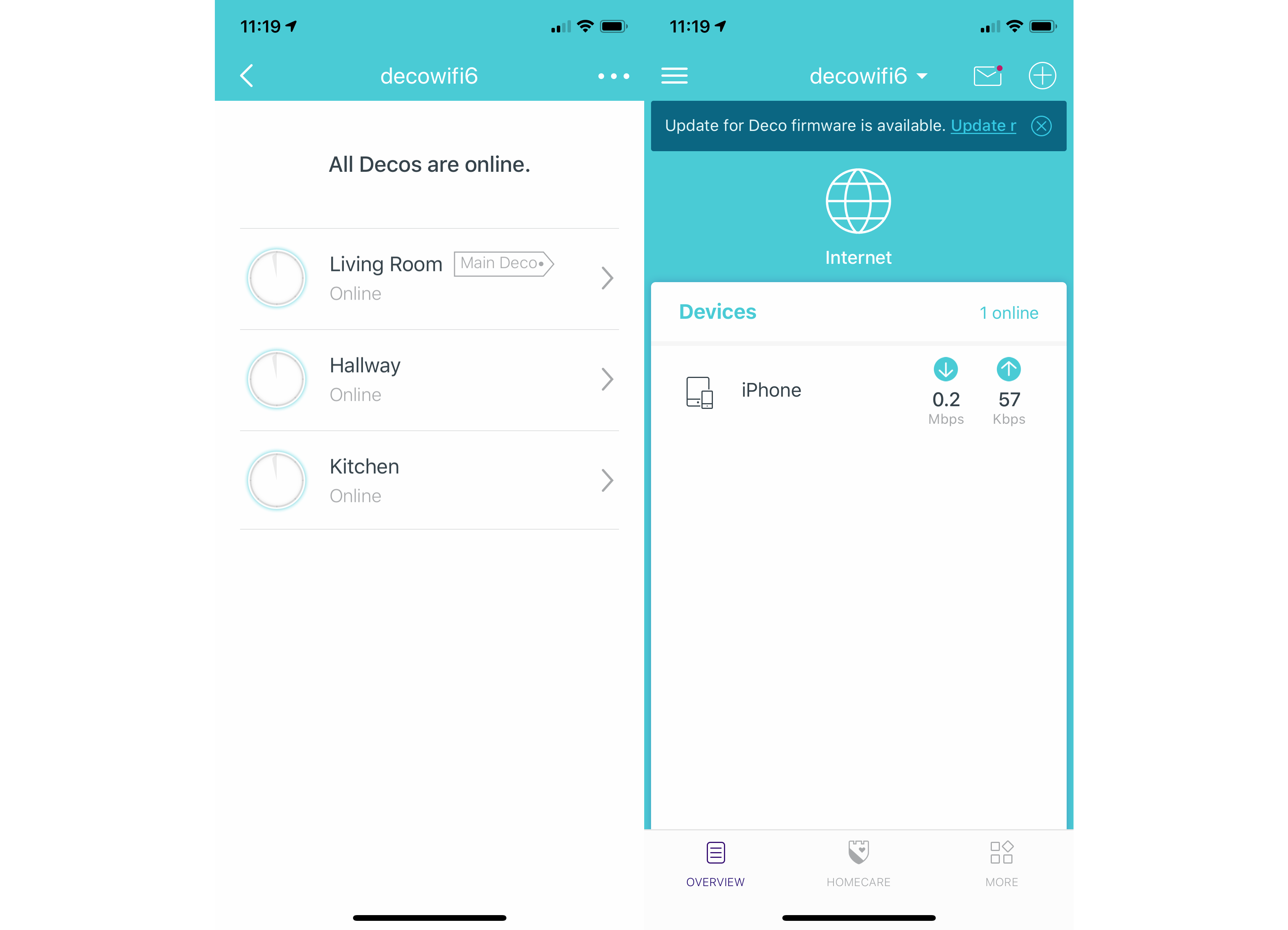 A status light on the front of the satellite tells you if the satellite is connected, but you can use the app to see a better signal strength meter, and reposition your satellites if you don’t get a good connection.

For longer-range communication, you can use an Ethernet cable for the backhaul to connect satellites together. If you don’t like the LED on the front, you can turn it off permanently, or you can use the night mode to schedule when the light turns on and off.

While you’re in the advanced settings, it’s worth turning on Fast Roaming. This technology will force clients to change which satellite they’re connected to in order to maintain the best connection. 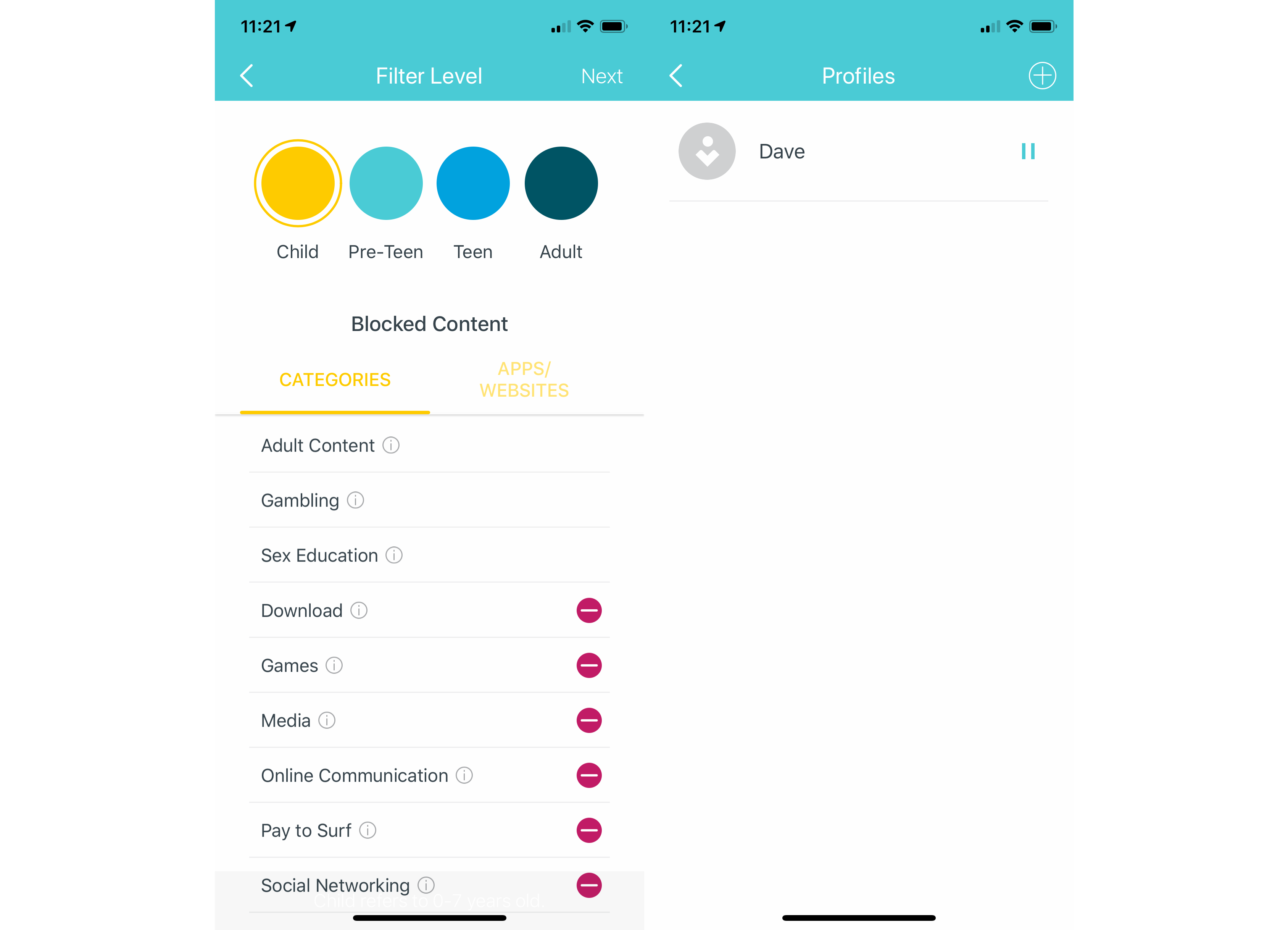 As with other TP-Link Deco systems, the X60 comes with Homecare, which gives you built-in antivirus, simple QoS controls (including the ability to set priority devices) and excellent parental controls.

Via the app, you can set profiles for each member of your family, and filter web browsing based on age. You can also enforce usage times and bedtimes or even pause a family member’s internet connection on all of their devices. It’s one of the best systems in the business and very easy to use.

Strangely, neither the app nor the web interface gives you the option to change which channels the 2.4GHz and 5GHz networks operate on. All you can do is change the wireless name and enable/disable the guest network.

The lower price of this mesh system compared to the other Wi-Fi 6 mesh devices can be seen when you look at the wireless specs. More expensive systems use a dedicated wireless link between satellites, but the X60 has single 2.4GHz and 5GHz networks, which are shared between clients and as the transmission between satellites.

Testing in my house, the close-range performance was excellent with an average throughput of 568.79Mbps, which was a touch faster than I measured with the Orbi Wi-Fi 6. However, at range, the lack of a dedicated wireless connection between satellites showed, with a speed of 283.72Mbps on the first floor and 162.69Mbps on the second floor. The Orbi system was considerably faster at range.

I placed the third satellite in the kitchen at the back of the house, where the signal is traditionally a bit weaker. I had to move the satellite once to get the best signal, but this saw a throughput of 243.32Mbps. 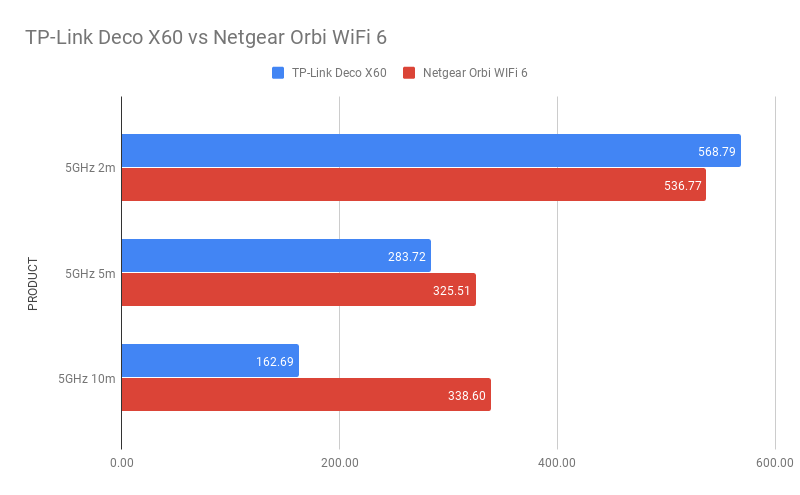 Should you buy the TP-Link Deco X60?

On price alone, the TP-Link Deco X60 is something of a bargain compared to other Wi-Fi 6 systems, but whether or not it’s the right system for you depends on what you need. Overall, the far more expensive Orbi Wi-Fi 6 is faster, particularly at range thanks to its dedicated wireless connection between satellites. It also has the more powerful 2.4GHz band.

Yet, for total coverage, the TP-Link Deco X60 is better (if not slower) thanks to its additional satellite. While you can buy the Orbi Wi-Fi in a three-satellite pack, it will cost you well over £1000.

For larger homes, or those that have problems with Wi-Fi, the additional satellite may just be enough to swing it, but the Orbi Wi-Fi 6 is considerably faster. And, if you don’t need the power of Wi-Fi 6, the original Orbi RBK50 was slightly faster at range, although the Deco X60 was considerably faster close-up.