What is the Toshiba Satellite Pro R50-B-12U?

The latest notebook from Toshiba eschews the snazzy design and gimmicks used on some of its rivals, and instead aims to nail its business blueprint with solid performance, great ergonomics and good portability.

It’s got a keen price, too – £550. That’s in mid-range laptop territory, and it’s hundreds less than you’ll pay for dedicated business portables and Ultrabooks. Can this machine punch above its weight?

The Satellite’s dimensions get it off to a good start. The R50 is 24mm thick and weighs 2.3kg, which means it’s barely bigger than hybrid machines such as Toshiba’s Satellite Click 2 L30W-B-10D and the HP Envy 15 x360. It’s also smaller than most mid-range notebooks – they tend to be heavier and a little flabbier.

The decent dimensions are paired with good build quality. The R50 is hewn from plastic, but most of its surfaces feel strong, with little give – only the middle of the screen displays any movement, but it’s on a par with its rivals. 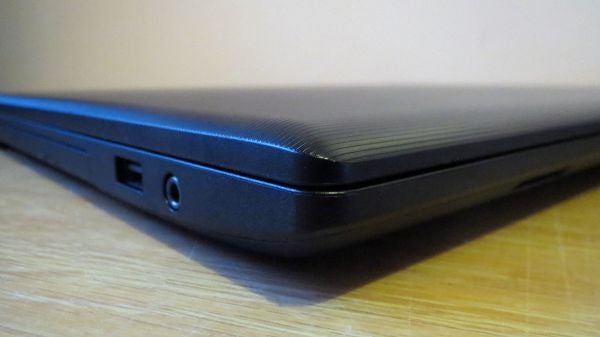 The R50 isn’t thick or heavy enough to be irritating when carried around, which is exactly what we’re after on a mid-range business notebook. Smaller machines are available, but laptops such as the Dell Latitude 13 or the Asus Zenbook UX303 are more expensive and miss out on certain features, like optical drives and numberpads.

This business notebook isn’t exactly a looker. The black plastic on the lid and around the keyboard has a plain lined pattern, and the keyboard and trackpad are both black. The only concession to style is the metallic Toshiba logo but, even then, this machine doesn’t stand out. 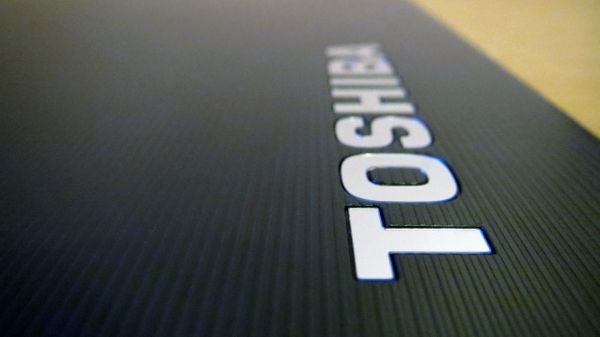 Nothing about its connectivity stands out, either. The interior serves up dual-band 802.11ac WiFi, Bluetooth 4.0 and a Gigabit Ethernet connection, and two USB 3 ports, a USB 2 connector, an SD card port and an HDMI output litter the edges.

The budget tells when it comes to the screen. It’s a 15.6in panel but it’s got a bottom-dollar resolution of 1,366 x 768, which limits how many windows can be comfortably used at the same time. We like the matte finish – a boon in the office – but it’s not a touchscreen.

It’s not got good quality, either. The colour temperature is too cold and the Delta E is too wayward – at an awful average of 8.18 – which means that colours aren’t accurate, which puts paid to hopes of any demanding colour work. The contrast of 231:1 is just as poor, and it means that black levels aren’t deep enough and that colours throughout are pale and washed-out. 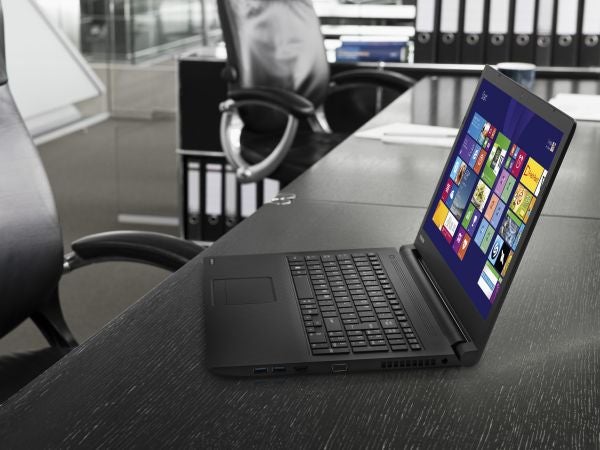 The Toshiba screen’s only redeeming feature is its 233 nit brightness level, which is adequate for basic work and web browsing. In fact, that’s all this screen is good for – it’s simply not got the resolution or quality to handle anything more than basic tasks.

The screen’s poor bill of health is matched by its rivals, most of which share its resolution and lack of quality. If you want the best screen available on a mid-range notebook, the Asus UX303 is a better bet – it still doesn’t have accurate colours, but it’s got better contrast, improved brightness and a higher resolution.

The speakers aren’t up to muster. There’s only enough volume to sate the smallest of home offices, and there’s no bass to speak of – just a muddied mid-range that’s given the smallest of boosts by the occasional low note. The top-end is weak and tinny.