The touchscreen has an impressive resolution of 1,920 x 1,200, which means a top-notch density level of 254ppi. That’s barely any different from the iPad 3, and it’s better than most Windows-based hybrids; many of those cheap machines are saddled with 1,366 x 768 panels.

The increased resolution gives the Satellite several advantages. Movies at 1080p can be viewed at their full glory, and pictures and games are far sharper. It also means you’ll be able to work with multiple windows open at once, as the screen isn’t quite so cramped.

It’s a solid start, but don’t expect good quality. The biggest problem is colour accuracy, which is off by some margin. The temperature of 7,942K is far too cool, and the average Delta E of 5.31 is poor. They’re both among the worst results we’ve seen, resulting in inaccurate colours. It doesn’t help that this screen can only display 59.8% of the sRGB colour gamut, making for a very narrow range of available colours. The best tablets hit well over 95%. 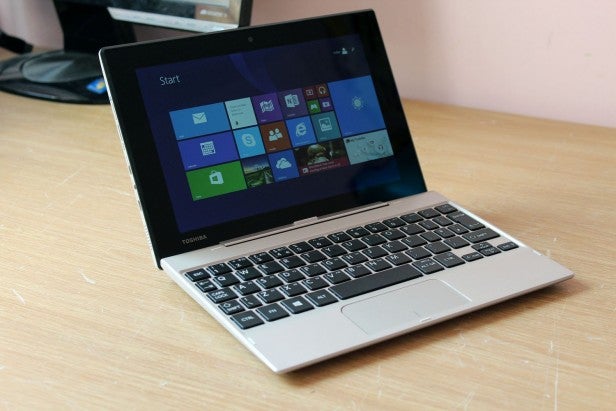 It’s a shame, because for brightness and black point the panel is better. The 1,004:1 contrast ratio is great, and the 0.3-nit black point is similarly impressive. Those figures translate to good variations in shades of white and black.

Such resolution, brightness and contrast figures put the Toshiba ahead of its Windows rivals, which suffer similarly poor colour quality and worse resolutions. The Satellite can’t compete with proper tablets, though: the Nexus 7 and iPad Mini 3 outpace it on all fronts, making all forms of viewing more enjoyable.

The screen might have the resolution to handle Full HD movies, but the speakers certainly won’t cope with the latest blockbusters. They’re far too quiet, with barely any bass and a disappointing lack of high-end – the reasonable mid-range can’t make up for these deficiencies. They’re barely good enough for listening to music. 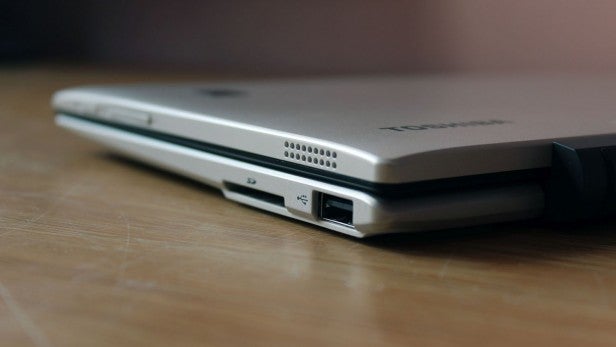 The Toshiba’s tiny size becomes a hindrance when it comes to ergonomics. The keyboard suffers a selection of layout issues: the Return key and many nearby buttons are too narrow, and the cursor keys are tiny. Several of the buttons on the left-hand side have been reduced in size, too.

Even the standard buttons are a noticeably smaller than their equivalents on larger machines – and, of course, the general lack of room means there’s no numberpad or row of function keys.

The typing action isn’t much cop, either. The keys have hardly any travel, their downward movement isn’t consistent and they’re rattly. There’s a problem with the base, too, which wobbles too much. 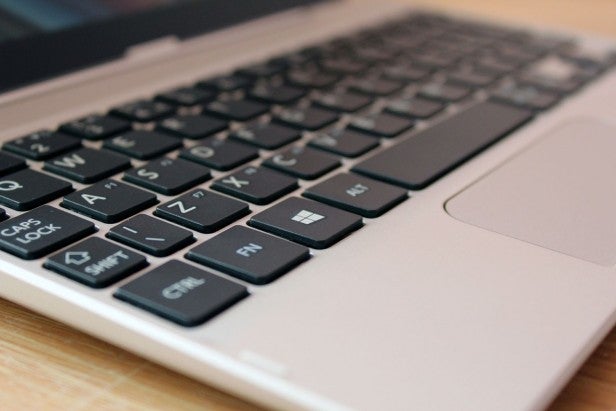 This isn’t a machine suited to lengthy typing or work . Those with big fingers will have to hen-peck their way around the keyboard because touch-typing will be too difficult.

The trackpad isn’t much better. Again, it’s small size makes navigation difficult, and the cursor often failed to respond for a second because it had gone into standby – an irritating, noticeable delay. The two built-in buttons are fine, but that’s cold comfort.