The Toshiba is underpinned by an Intel Atom Z3735F processor that runs at speeds between 1.33GHz and 1.83GHz, and it has 2GB of memory. Don’t expect performance miracles from this machine, however – other Atom parts prove quicker, and Celeron, Pentium and Tegra hardware is also faster.

The Toshiba stumbled to a score of 2,189 in the Geekbench multi-core benchmark, which is slower than every other system we’ve mentioned here – and, sometimes, more than 1,000 points behind. 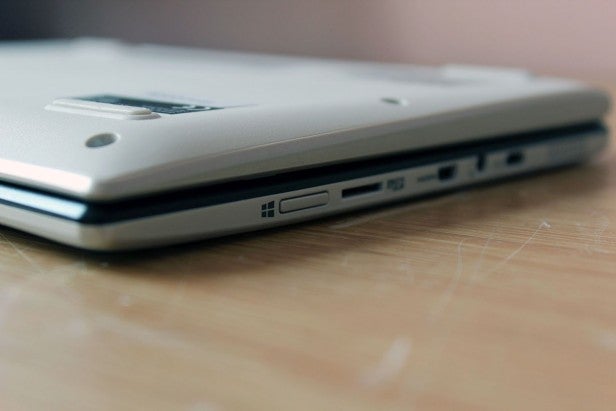 The Satellite is no better with games. Its Ice Storm score of 14,513 also fell behind every other rival tablet and hybrid.

It’s poor in real-world applications too. Although it copes fine with basic software, the Start screen stuttered during navigation and loading times were sluggish. Media playback was fine, but games proved trickier: Asphalt 8’s frame rates were consistently slow, and less demanding titles such as Jetpack Joyride were similarly afflicted.

The Satellite’s prospects are further hampered by its storage. The Toshiba-made eMMC drive has a tiny 32GB capacity that’s cut to 15GB once Windows is installed. Sequential read and write speeds of 151MB/sec and 46MB/sec are poor, with the latter result especially dreadful. There’s barely any room to store media or applications unless you use the microSD slot, and both loading and boot times suffer.

The low-power components are given a helping hand by the Toshiba’s pair of batteries: there’s one unit in the tablet, and a secondary power pack in the base. 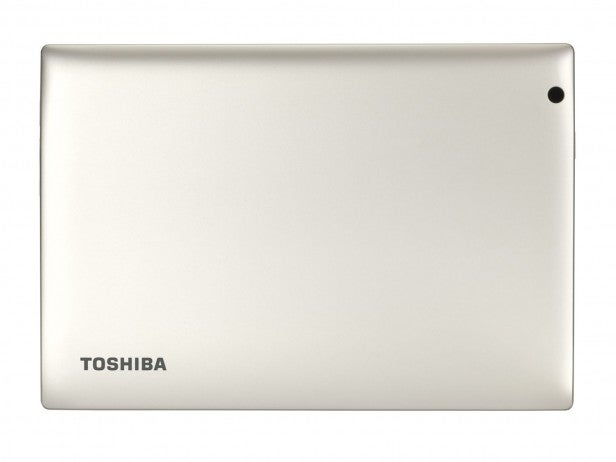 When combined they help the Satellite Click Mini to beat every hybrid competitor. In our standard 40% screen brightness test the Satellite lasted for 9 hrs 35 mins, which is more than an hour longer than the Asus Transformer Book T200TA – this machine’s closest Windows-based challenger.

The Toshiba doesn’t fare so well when compared with proper tablets, however. The Nexus 9 lasted for more than 11 hours and the iPad Mini 3 for just under ten. The Toshiba could manage only 5 hrs 15 mins when it relied on the single battery in its tablet.

The Click Mini’s battery life helps it fall between Windows-based hybrids and rival tablets in our tests – one of many areas where it’s left in the middle.

The Toshiba’s camera, like the imaging gear on so many other hybrids, feels like an afterthought. The lens’ 5-megapixel rating means it won’t be able to challenge the best tablets and smartphones. Our tests reveal middling quality: the crisp detail in some shots is undone by bright areas that lack definition, and some edges are left looking blurred rather than sharp. The camera struggled to pick out details in darker areas, too.

Toshiba has a poor reputation for bloatware, but the Click Mini doesn’t suffer too badly. Apps such as Kindle, Netflix, eBay and Skyscanner are installed on the Start screen, but are sequestered in one section on the extreme right-hand side, and the desktop is saddled with only a handful of extra icons. The worst offender, as usual, is McAfee, with its relentless popups and messages. 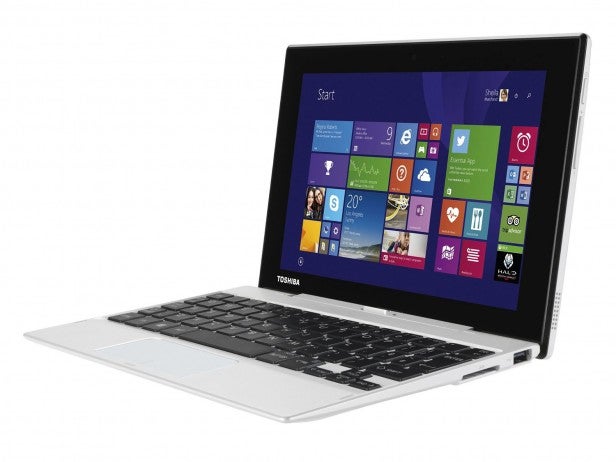 Should I Buy the Toshiba Satellite Click Mini L9W-B-100?

The Click Mini has an eye-catching price and several impressive attributes, from its full Windows installation to its 1,920 x 1,200 screen. There’s no denying it works well as a hybrid device, too: it’s smaller than every Windows-based rival, and not too far off proper tablets when its weight and dimensions are considered.

In order to produce something this small and cheap, though, Toshiba has made sacrifices. The speakers lack quality, and the keyboard and trackpad aren’t good enough for even the lightest work. Performance is consistently poor, and the storage is tiny.

It leaves the Satellite Click Mini in an uncomfortable position. Proper tablets are lighter, faster and can be just as productive with a decent keyboard case, and budget laptops will be superior for work or school. The low price means the Satellite will suffice for those who really do need both form factors in the smallest space possible, but its performance and design issues mean we’d advice looking at dedicated laptops and tablets first.

The Toshiba is thinner, lighter and cheaper than Windows rivals, and its tiny size means it works well as a hybrid device. It struggles for performance, though, and its keyboard and trackpad are both left wanting for quality. The Satellite Click Mini is only worth considering if you’re on a tight budget and are after a small, basic hybrid. Dedicated tablets and laptops are better at their respective jobs, however.

Not convinced by this hybrid device? Check out our pick of the five best laptops for students, or read our verdict on 2015’s greatest cheap tablets.