Chromebooks have forced a resurgence in cheap Windows laptops recently and not before time. For whatever reason the industry turned away from netbooks, but now hardware and competition means products that echo them are making a comeback.

The Toshiba Satellite Click Mini, launched at CES 2015, is a very impressive example. This 8.9-inch hybrid has a sharp 1920 x 1200 IPS display, weighs less than a kilo and has a 15-hour battery life. Tick, tick and tick. All this for a planned £250 makes it an exciting prospect.

Toshiba Satellite Click Mini Release Date and Price: The Toshiba will go on sale in Q1 (Jan to March) for just £250 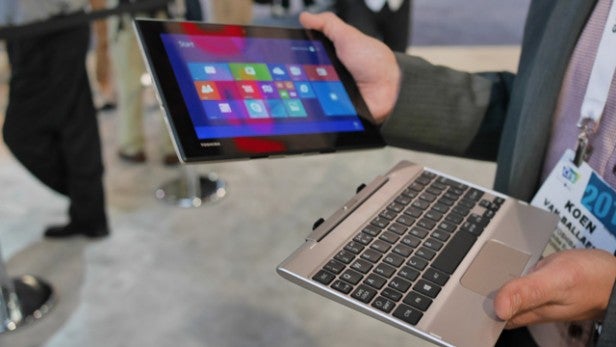 The Click Mini offers a great deal for such a cheap hybrid. Like Android tablet rivals, its 1920 x 1200 screen looks sharp and colourful and the 8.9-inch size and 16:10 aspect is ideal for reading and web browsing on the go. It’s not just ‘good for the price’ it’s just good full stop.

Inside the tablet is an Intel Atom Z3735F processor, 2GB RAM and 32GB of flash storage. This Atom should match mid-range Android devices for performance, though clearly it’s limited to basic productivity and web browsing. For £250, though, it should offer enough performance – I didn’t notice any stuttering during my hands-on time. 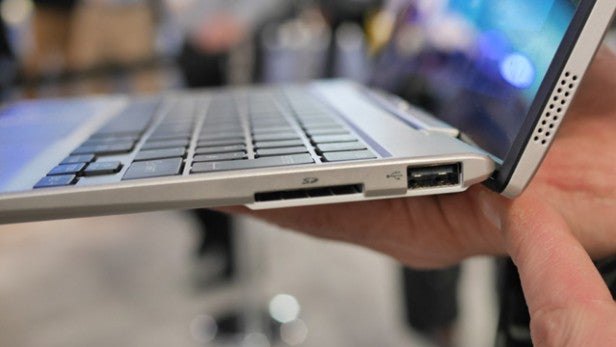 You get all the standard tablet features, including WI-Fi, Bluetooth 4.0, and even front and rear facing cameras. We don’t expect much from the 5-megapxiel rear or 2-megapixel front cameras, but at least the main one has auto focus. 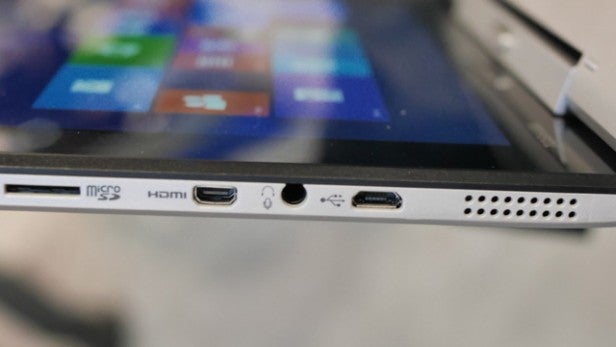 The fact you get both sizes of SD card slot is a thoughtful touch, particularly as it means you can expand the main storage with the microSD (up to 128GB) and still access photos from your camera quickly with the main SD card slot.

Given the price it’s hardly surprising the Toshiba Satellite Click Mini won’t win any fashion awards, but it’s pleasantly compact and sturdy. The tablet weighs 470g – a little heavier than typical 8.9-inch tablets, but light enough – while the tablet and keyboard combined tip in just under the one kilo mark. 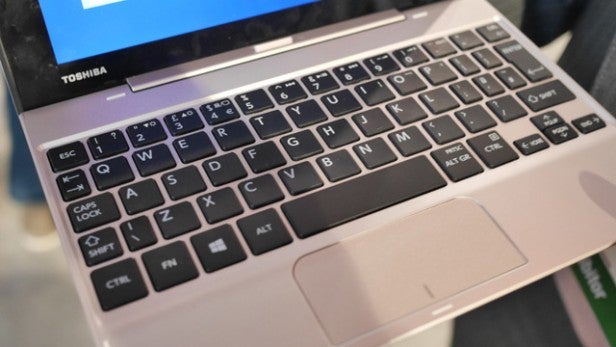 Again, at 9.8mm thick the tablet segment is thicker than most, but I really can’t see this being a problem. It costs £250! More importantly, Toshiba claims up to 16 hours of video playback with the keyboard dock – there’s a battery in both sections – which is very impressive.

I didn’t have enough time to judge the keyboard properly, but I was impressed by the sensible key layout that doesn’t mess about in an effort accommodate larger keys. The small keys won’t be easiest to type, but show me an 8-inch tablet with a better keyboard and I’ll be impressed and surprised. 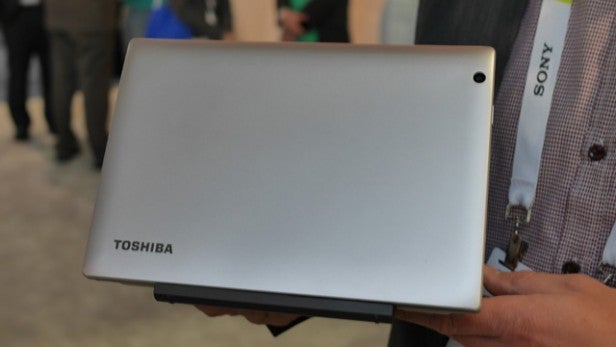 It’s too early to hand out awards just yet, but I think Toshiba is onto winner with the Satellite Click Mini. It’s clearly thought very hard about what people who might buy this kind of product want and this shows in the sensible touches, such as the dual SD card slots and high-quality screen, that I haven’t seen on any product at this price. Provided its Atom processor can keep up, the Click Mini could prove a great cheap hybrid for students, kids and any adult who values value and practicality.