Hybrids are a new addition to the laptop landscape, which means many companies are still trying to nail the new form factor – including Toshiba. Its new Satellite Click 2 L30W is its second attempt at crafting an affordable hybrid with a detachable screen.

The blueprint is familiar. The Toshiba’s tablet section houses a 13.3in IPS touchscreen alongside every major component and the battery. The thinner, lighter base is used for the keyboard and touchpad. 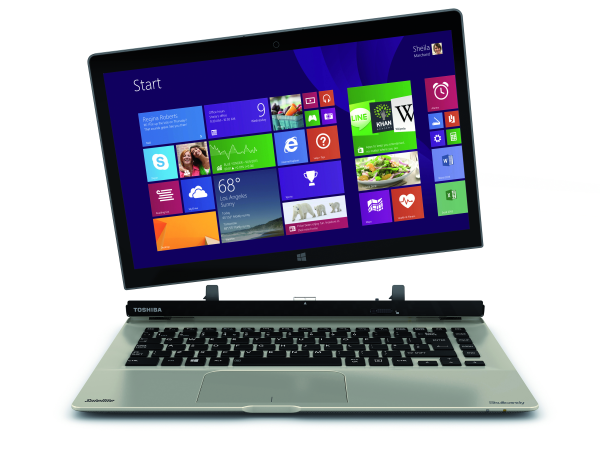 Toshiba has built the L30W from aluminium with a “light gold” finish, but we had to squint to spot that particular colour – the metal here barely looks tinted. It’s not plain or ugly, with a machined pattern on the inside and a brushed finished on the lid, but it doesn’t stand out – rivals such as the HP Pavilion x360 and Lenovo IdeaPad Yoga 2 11 are more distinctive.

The L30W’s hinged mechanism is pitched around a centimetre forward from the back of the base, and it dominates the L30W’s design. Sliding a switch on the front of the hinge releases the screen. It’s easy, and when the tablet’s installed into the base it moves back and forward freely and clasps snugly to the base.

We’re pleased Toshiba has moved the L30W’s hinge forward, as it addresses one of our main criticisms of its previous hybrid, the W30T. The older machine suffered from a top-heavy design and an awkward hinge that made it easy to tip the machine backwards in laptop mode. That doesn’t happen with this system. 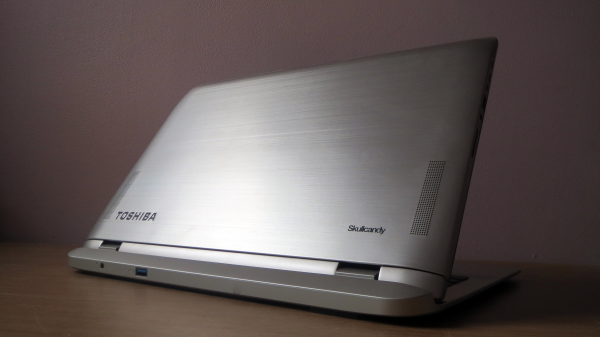 In other areas, the new hybrid suffers from old problems. Its 2.1kg weight means the L30W is heavier than the sub-2kg HP and Lenovo systems. The Satellite’s 23mm thickness isn’t great, either – one millimetre more than the HP, and almost five more than the Lenovo.

Those statistics don’t compare well to dedicated tablets, either; all are slimmer and lighter even with keyboard cases attached.

We’re pleased Toshiba has eliminated its top-heavy design issues, but the L30W isn’t good enough in every form factor. The tablet section is bulkier than proper tablets, and its sheer width makes it awkward to use in many scenarios – a problem that also afflicts its hybrid competition. However, those hybrid competitors are more usable as laptops thanks to thinner, lighter designs, and proper laptops have better designs with fewer compromises.

There’s a USB 3.0 connection on the base and a USB 2.0 port on the tablet, which matches the Lenovo. Elsewhere there’s a micro-HDMI port, an SD card reader and one headphone jack – again, the match of the Lenovo. The inside is better equipped thanks to dual-band 802.11ac Wi-Fi. The power and volume buttons sit amid the ports, but they’re poor quality – soft, and devoid of feedback. 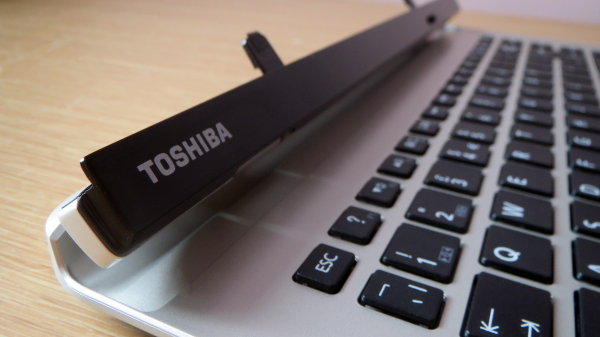 This is a budget hybrid, so the 1,366 x 768 resolution is expected – the same as both competitors. That’s enough pixels for basic work and browsing, but it’s only enough to watch movies in 720p. It also makes it tricky to work with two windows at once.

The Toshiba makes up for the lack of pixels with good brightness and contrast. The 326 nit brightness is good, as it means there’s enough backlight to make colours vivid, and to ensure the screen is visible outside. It’s much brighter than the pallid HP, and not far off the Lenovo. Viewing angles are good with little loss of clarity when the screen tilts back and forward, and the glossy finish isn’t troublesome.

At 881:1, the Toshiba’s contrast batters the HP while almost matching the Yoga. Colours produced by this screen look good at both ends of the scale: bright reds, yellows and blues match deep blacks, and there are detectable variations between subtly different shades. 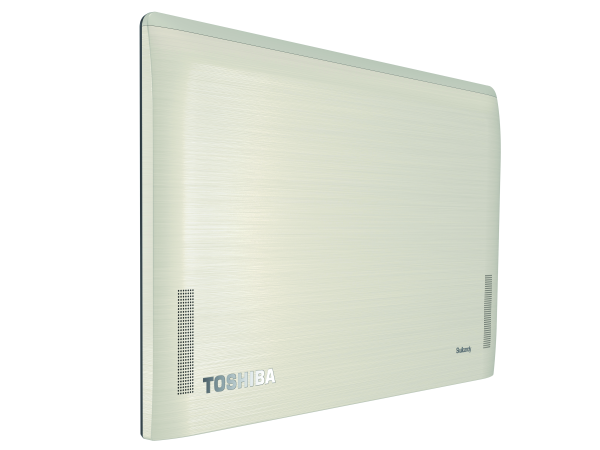 Colour accuracy and gamut coverage is less impressive. The sRGB gamut coverage figure of 59.9% is lower than both rivals, and the average Delta E of 5.41 is a little behind the Lenovo. The colour temperature of 6,884K is also a little cool.

The Toshiba’s screen doesn’t have the pixels, the gamut or the accuracy for demanding work or high-end graphics applications, but it’s bright and has good contrast, which makes it a decent everyday panel. It’s much better than the HP’s screen, but the Yoga is a little better still.

Toshiba has switched from Beats to Skullcandy for its audio, presumably following Apple’s acquisition of Dr Dre’s speaker and headphone firm.

Skullcandy’s hardware is an improvement on the Beats kit used in previous Toshiba hybrids. The high-end is snappy rather than tinny, and the mid-range sounds good – it’s got some crunch and depth. There’s barely any bass, but this is expected and acceptable. All told, this Toshiba does the job for listening to music or watching movies if better audio sources aren’t available.