Toshiba devotes the base of the Click 2 entirely to the keyboard and trackpad, which makes it even more disappointing that this hybrid doesn’t provide satisfying typing.

There’s too much give in the base, despite the fact that this unit weighs 1kg and has no other components of its own. The lack of firm feedback is exacerbated by the keys themselves, which are light and lack travel. This keyboard is adequate for emails and IMs, but it’s not got the comfort or action demanded by serious writing – a common failing among hybrids. If typing is a key issue, the HP Pavilion is better, with more travel and weight.

The trackpad’s surface is fine, but the buttons are inconsistent. In the middle of the pad, we could click with only a little pressure, but more was required to register presses in the corners. 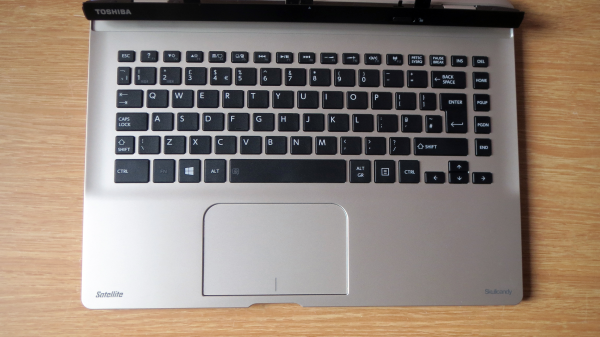 Toshiba typically saddles its systems with extra software, and that’s no different here. Load Internet Explorer and a second tab opens Symbaloo. It’s a front-end designed to foist all manner of brands on the user in a tiled interface, from Bing and Tesco to various holiday, shopping and news sites. It’s a significant irritation, although we’re pleased it had little impact on performance.

However, that’s not the end of it.

The barrage continues on the Start screen, where a host of Metro UI apps lurk: Netflix, eBay, Vimeo, SkyScanner and Kindle are just some of the tools Toshiba thinks users will want, though in fairness we’d agree that most users would indeed find that selection useful.

Your mileage may vary with this software, but all told we’d uninstall most of these tools immediately, if only to prevent pop-ups and make the L30W feel like our system. 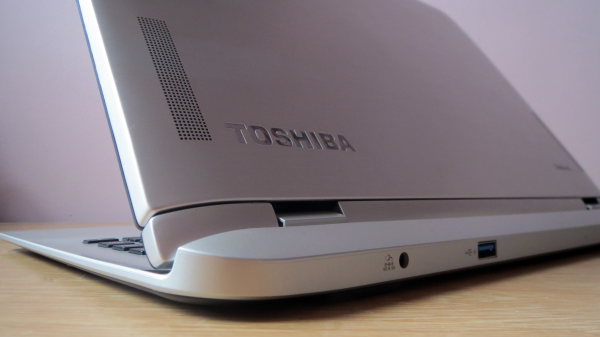 Toshiba’s detachable approach to hybrids mean the L30W is slimmer and lighter than its rivals in tablet mode, but it still can’t compete with proper tablets. The situation is little better when the Satellite’s attached to the base; Toshiba has fixed some of its design issues, but the L30W is still chunkier than both hybrid competitors and most proper small-screen laptops.

Inconsistencies hamper the L30W. The screen is as good as the Lenovo’s panel, build quality is decent, and it’s a smart-looking machine. Conversely, it’s only got enough power to handle basic computing, the keyboard isn’t great and battery life isn’t good enough.

The £499 price doesn’t do the L30W any favours, either. The Lenovo now costs £400, rather than £499, and it’s faster, slimmer, lighter and has better longevity. As far as budget hybrids go, the Yoga trumps Toshiba.

The latest Toshiba hybrid is a visual and ergonomic improvement over the last generation, which means it’s easier to use, but it remains thicker and heavier than the competition. Its good screen and build quality are hampered by its low-end components, poor keyboard and mediocre battery life. The Lenovo IdeaPad Yoga 2 11 has more going for it – including a better price.

Not convinced? Take a read of our laptop reviews, or examine the latest tablets.