The BDX5500 is Toshiba’s latest range-topping Blu-ray player, which boasts a full complement of features and a gorgeous design that allows for vertical or horizontal installation.

It’s the sort of cute, compact player that’s ideal for watching movies in the bedroom, and with built-in Wi-Fi and web content it’s also an easy way of bringing smart functionality to older TVs around the house.

Hats off to Toshiba’s design team for dreaming up a Blu-ray deck that’s a refreshing break from the norm. It eschews the usual rectangular box shape for a square casing with groovy curved corners and a fetching brushed silver top panel. 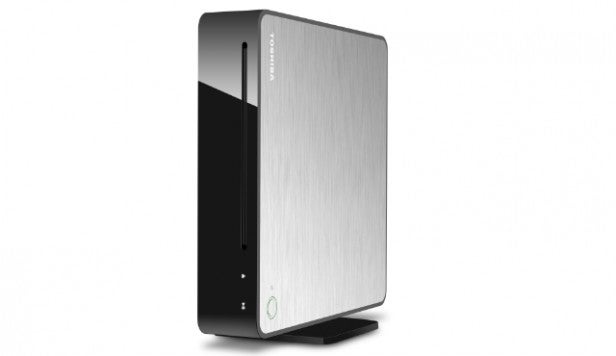 It’s also pleasingly slim and compact, measuring 200mm wide by 49.5mm high. It’s a little light and plasticky when you pick it up, but no worse than any other player at this price.

The deck can be laid flat in the conventional way or installed vertically on the supplied stand, which is attached using two screws on the back. This is a boon if you want to slot it into a narrow gap beside your TV.

This player oozes style. There’s a disc slot in the gloss-black front panel – much cooler and tidier than a tray – next to which are touch-sensitive controls that light up when tapped, then disappear. The power button on top is surrounded by a funky green light when active.

Connections are sparse but Toshiba isn’t catering for niche needs at this price. What you get is the typical budget line-up of HDMI output, Ethernet, coaxial digital output (as opposed to the more common optical) and a USB port. The latter allows you to hook up a flash drive or external HDD and play music, movies and photos.

As mentioned, the BDX5500 boasts Toshiba’s full set of features, which means you get 4K upscaling, 3D Blu-ray playback, built-in Wi-Fi and Miracast screen mirroring. You won’t find any of these on the cheaper BDX2550 or entry-level BDX1500, nor will you find the square design and vertical mounting. 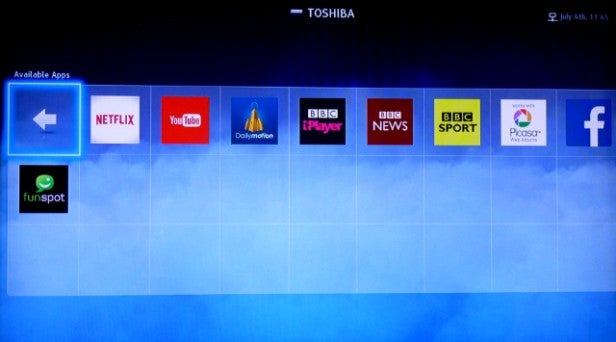 Access to internet content is now an intrinsic part of the Blu-ray player experience and on that score Toshiba has upped its game in the past couple of years. As a result the BDX5500 comes equipped with apps for BBC iPlayer, Netflix, YouTube, Dailymotion, BBC News, BBC Sport, Picasa, Facebook and Funspot. There’s a web browser too, but it’s cumbersome to explore with the remote.

That’s a decent selection, but a greater choice of catch-up TV apps wouldn’t have gone amiss – after all, Samsung’s BD-H6500 throws in 4OD, ITV Player and Demand 5 – plus the LG BP645’s inclusion of Now TV and Spotify makes it a more compelling line-up. 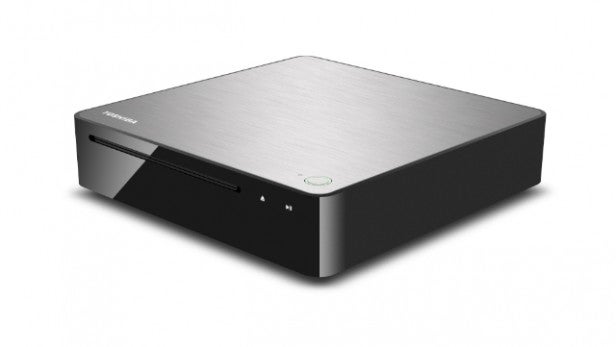 The deck is also DLNA certified and you can stream content from PCs and other devices connected to your network. We were able to play AVCHD, WMV, MP4, XviD and AVI videos, but it didn’t detect our MKV or DivX files – MKV is only supported via USB. As for music we could play MP3, WMA, AAC and WAV but not FLAC.

The deck also decodes Dolby True HD, DTS HD Master Audio, Dolby Digital Plus and DTS HD, as well as outputting them as a bitstream via HDMI for your AV receiver to decode.

Boot up the BDX5500 and the first thing you’ll see is the BD Player Setting Wizard, which guides you through all the crucial settings – onscreen language, resolution, aspect ratio, internet connection and so forth. 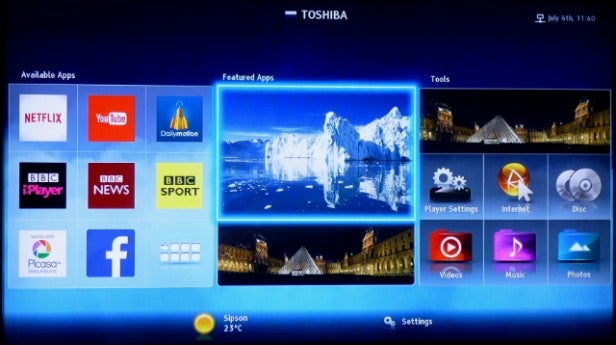 Confusingly there are two separate Home menus, one of which is a ‘browser’ that lets you access internet apps and DLNA content. Toshiba has done a terrific job with this screen, making it highly attractive and easy to follow.

It’s split into Available Apps, Featured Apps and Tools. Featured Apps basically consists of pictures of an iceberg and The Louvre, both of which display a ‘Not Available’ message when selected. The various icons and tiles are superimposed over a cloudy sky (the cloud, geddit?) and it’s decorated in punchy, eye-catching colours. There’s even a weather widget at the bottom.

However, when you enter or exit this menu there’s an annoying pause while it has a think, plus the cursor’s tendency to lag behind remote commands can be testing at times. 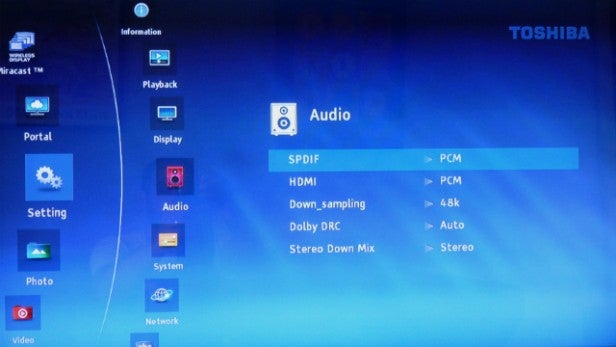 If you exit the Browser menu, it whisks you to the Player menu where you can fiddle with the deck’s settings or access Miracast. It duplicates some of the portal screen, but we like the slick and attractive layout that places the icons in an arc on the left of the screen, moving to the right as each submenu opens. Good stuff, but we think the menu system could be streamlined into a single interface. 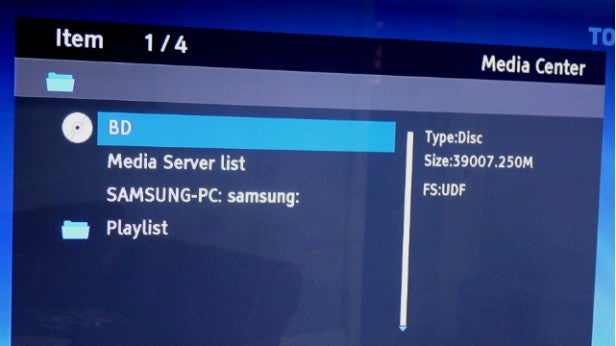 Away from these two home screens, the menus are less inspiring. When exploring DLNA menus, for example, there’s a basic, boring grey box in the middle of the screen, with files displayed in simple lists. Yawn. That said, this layout makes it easy to find files and we’re impressed by how quickly and smoothly the deck plays videos.

There’s also a ‘Quick’ menu that lets you check stuff like subtitles and audio tracks, while the ‘Display’ button shows the same info in a banner at the top of the screen.

Although we’re not blown away by the remote’s build quality, you can tell some thought went into the button arrangement. The direction pad is conveniently placed right in the middle, plus the often-used Home and Internet buttons are coloured white to make them stand out. All of the keys are clearly labelled too. The only thing we don’t like is the extra set of arrow keys surrounding the direction pad, which make it too cluttered.

The BDX5500’s pictures look as good any other player at this price. 1080/24p Blu-ray discs look intensely sharp and stable, with hard, tightly-contained edges and jaggie-free diagonal lines.

Fire up Avatar on Blu-ray and the exquisitely-rendered CG scenery and creatures look stunning – you can pick out individual leaves on Pandora’s trees and bushes, while the scaly texture of the Thanator’s skin is remarkably clear. Close ups of human faces reveal skin blemishes and pockmarks like any good hi-def source should.

We’re also pleased to report that motion is smooth, which helps during the movie’s battle scenes when hundreds of objects dart around the screen. There are no problems with colour reproduction either – every shade looks natural and well-balanced, with smooth tonal gradations. Switch to 3D and the deck’s sharpness, stability and punchy colours ensure you get the full benefit of the format’s added immersion and depth. 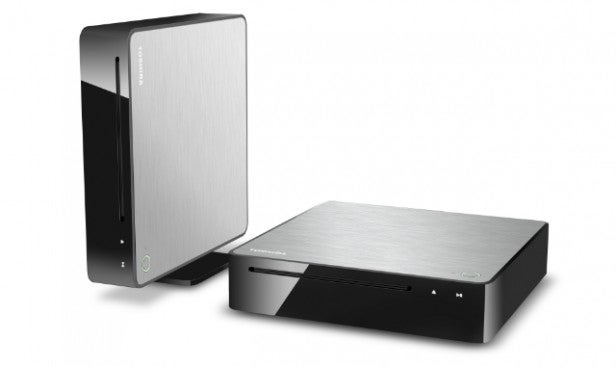 The BDX5500 is an impressive deck in many respects, offering decent features and internet content, terrific pictures and good-looking onscreen menus. We love the compact, square-shaped design and vertical mounting option, making this a player that’ll look great in the living room or bedroom.

The Toshiba’s only real downfall is that it’s up against some top quality competition – the Samsung BD-H6500, Sony BDP-S5200 and LG BP645 offer a better range of internet content and generally go about their business with extra speed and slickness.

But if you like the stylish design and value good quality Blu-ray playback over web content then we’re sure you won’t be disappointed.

The BDX5500 is an impressive Blu-ray player, mixing a stylish vertical design with decent features and razor-sharp pictures, although rival decks get you more for your money.

Next, find the perfect TV to match your Blu-ray player with our Best Value TV roundup