The BDX2550 is the middleman in Toshiba’s latest Blu-ray player range, sandwiched between the top-end BDX5500 and entry-level BDX1500. It lacks the snazzy styling and vertical mounting of the BDX5500, but retains the built-in Internet portal, making it an affordable way of watching catch-up content on non-smart TVs.

At just 270mm wide and 38mm high, the BDX2550 is a cute and compact player that’s crying out to be used in the bedroom. Build quality is understandably lightweight, but the aluminium casing makes it a little sturdier than some players at this price.

The snazzy gloss-black finish on the front panel and curved corners are easy on the eye without going OTT. A ring of light surrounding the power button glows green when switched on, alongside three small buttons and a USB port for media playback. There’s no LED display, but that’s hardly surprising on a deck this small.

Rear connections are typical for a budget player – HDMI output, coaxial audio output and Ethernet port. The inclusion of a coaxial port might cause problems if your sound system only features optical inputs, which are the preferred input on most soundbars. There’s no built-in Wi-Fi, so the Ethernet port takes on added significance if you want to access the deck’s smart functionality – you’ll need to rig up a LAN cable directly to your router.

Unsurprisingly at this price the feature list is sparse – there’s no 4K upscaling, 3D playback or Miracast as found on the BDX5500. However, you can access a decent range of internet apps, with a line-up that includes BBC iPlayer, YouTube, Dailymotion, Netflix, BBC News, BBC Sport, Facebook and Picasa. It’s not up to the standard of Samsung or LG’s players but we’re sure iPlayer, YouTube and Netflix will get a lot of use.

Another nice surprise is the deck’s DLNA compatibility. Connect it to your network via Ethernet and you can stream music, video and photo files from devices on the same network. We gave it a whirl and the BDX2550 streamed MKV, AVCHD, MP4, AVI, WMV and XviD videos, as well as MP3, WAV, AAC and WMA (all of which can be played from USB flash drives) but unsurprisingly it didn’t play FLAC, ALAC or DivX.

The BDX2550 uses two different menu screens – one for the online portal, another for the player’s general functions. Some options are repeated on both screens, which can be confusing and long-winded – it would have been better to consolidate everything into one menu. 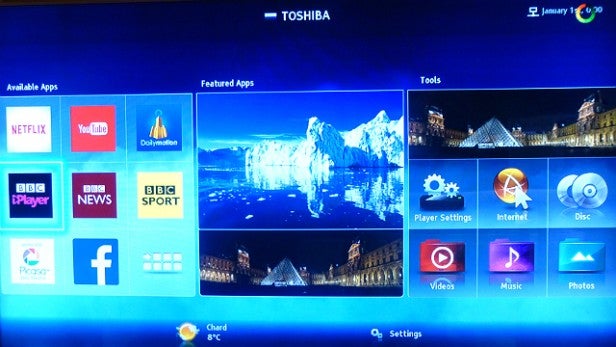 Still, the online interface is gorgeous. Set against the backdrop of a sky to represent the ‘cloud’, it uses bold colours, eye-catching icons and crisp HD graphics. The Internet apps are grouped together on the left, while the right-hand side offers options such as music, video, photo, disc and Internet – yep, there’s a built-in web browser. Bizarrely, there are images of the Louvre and an iceberg under Featured Apps, which bring up a ‘Not Available’ message when selected. 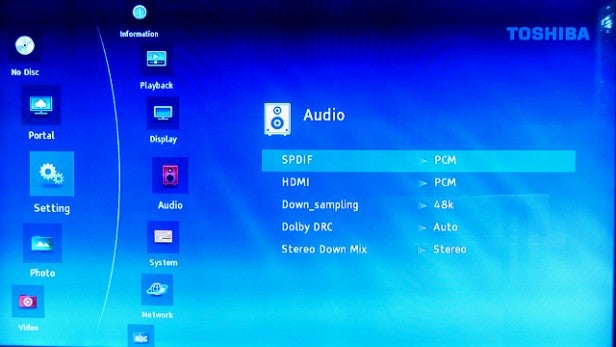 The other main menu features an arc of coloured icons on the left. When you select ‘Setting’, the corresponding options appear in another arc to the right, then the relevant setup menu appears in the remaining space. It’s clear and logical, making it easy to make those all-important tweaks. In the Video section is a Video Adjust menu that lets you fiddle with the brightness, contrast, hue and saturation, plus three sharpness settings (low, middle, high).

Select Music, Video or Photo and a box appears listing the available USB devices and DLNA media servers. It’s dull but practical. The subsequent sequence of folders and file names is clean and easy to follow, but lacks the panache of the portal.

During playback the Quick menu brings up a list of disc information, such as elapsed time, chapter, subtitles and audio tracks, which is very useful given the lack of a front panel display.

The remote is light and plasticky but thoughtfully laid out. The positioning of the direction pad, Back and Exit buttons makes navigation quick and intuitive, likewise the dedicated internet, setup menu and web browser buttons. The extra arrow keys surrounding the direction pad make things a bit crowded, though, and some of the buttons need a really firm press to make them register.

The BDX2550 boots up in under five seconds, loads up web apps and streams video without any major delays and moves between menus quickly. That said, there’s a fairly long wait when it loads or exits the portal menu, plus disc loading is slow – it takes a minute to load the Java-heavy Terminator Salvation disc, twice as long as most other current players.

Blu-ray picture quality is also impressive. During Children of Men’s electrifying opening scene, the deck digs out every last speck of detail on the dirty, gloomy London streets, from litter on the pavement to the tiny writing on electronic displays in the background.

The grain in the picture is sensitively handled, preserving the film’s characteristically grubby look without over-sharpening it (provided you keep the sharpness setting on ‘Low’). Lines and objects are crisply drawn and the deck’s excellent contrast gives the image a good sense of depth and solidity.

The film has a muted colour palette but the Toshiba tackles the subtle hues and shading with a level of deftness you might not expect from a £60 player. Bright colours are few and far between, but when they appear the BDX2550 makes them look fulsome and natural – the lush green trees surrounding Jasper’s home and his bright yellow car are good examples.

Don’t forget that the BDX2550 will also upscale DVDs to match the resolution of your TV. We watched Se7en on a 55in set and the deck does a surprisingly good job with the tricky material. The texture of Somerset’s bed sheet in the opening scene looks punchy and detailed despite a touch of shimmering mosquito noise, and when Mills bounds up the steps at the first murder scene, block noise is kept to a minimum on the walls behind him. It’s not the best upscaler we’ve seen, but better than £60 would suggest.

If you want a cheap, no-frills Blu-ray deck and you’re not bothered about mod cons such as 3D, Miracast and 4K upscaling, we think you’ll be very happy with the BDX2550.

It’s fine as a main living room player but ideal for the bedroom, thanks to its compact size and easy operation. The line-up of Internet content is appealing – particularly if you’re connecting it to a TV without built-in smart functionality – and the ability to stream content via DLNA is a boon at this price.

In fact, DLNA functionality gives the BDX2550 an advantage over the identically priced Sony BDP-S1200, although the Sony is nicer to use and offers a wider selection of Internet content.

It’s predictably light on features, but the BDX2550 is a likeable budget player with some useful Internet apps and a cute space-saving design – not to mention stunning pictures.